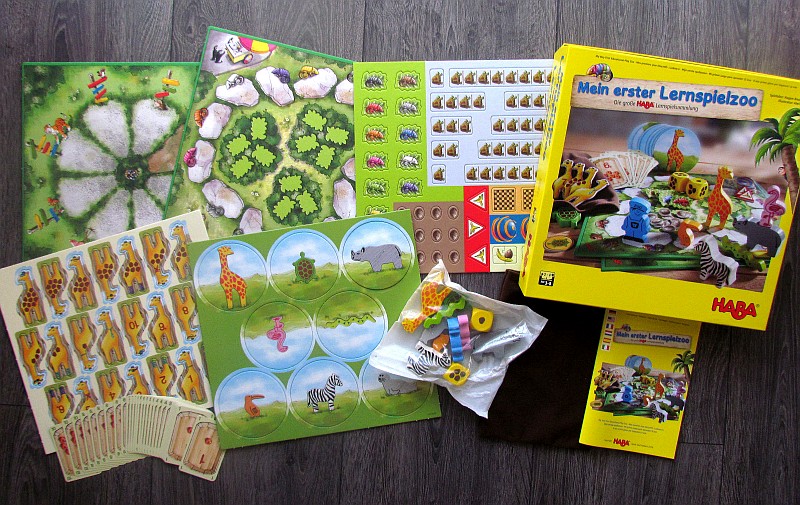 Have you ever played a game with animals and wondered, how it is possible, that all creatures have the same game to pass their time? Don’t they all have different sklils, that they could then demonstrate, when its their turn? We should then organize such an animal olympics at the zoo!

Well, you see, and Hagen Baumann had the exactly same idea, created a set of games and compiled them under name Mein erster Lernspielzoo (My Very First Educational Play Zoo). The game was published under the HABA company logo and for the Czech reader (and player) the most interesting name is the illustrator Aleš Vrtal.

If you look at the big yellow box, you would almost even believe that the entire zoo is hidden inside. And it is almost like that. It contains a whole four large boards, but also a set of wooden animal figures. But there are also plenty of tokens, that show other animals in different colors, shapes and sizes to be used for different entertainment options. 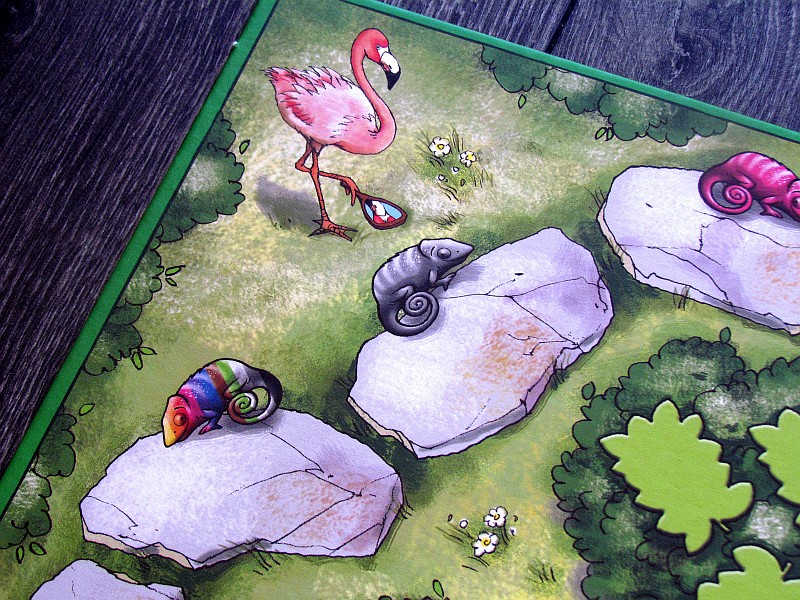 A total of ten different games are hidden inside the box! These progress in difficulty step by step from the recommended age of three up to four years. So it is clear, that the huge box is intended for the very smallest children to play with.

And it all starts with Touching Animals game, which tests touch and shape recognition without visual help. Children will try to draw the right animal friend from the bag according to the assignment determined by the cube and figurine. Depending on the number of pips, the nurse character Tim moves around pictures of animals randomly distributed in a circle and provides assignment for every round.

In the second game, children will have fun alongside five giraffes with different numbers of spots – from none to five. A total of six long-legged creatures are spread in the center. Players will receive them from the center by dice roll. Depending on the number of polka dots, he must choose the right giraffe and put it in front of him. Small players will learn to count with the help of this game, from the zero up. So it is just a good recognition and assignment of the first six numbers. 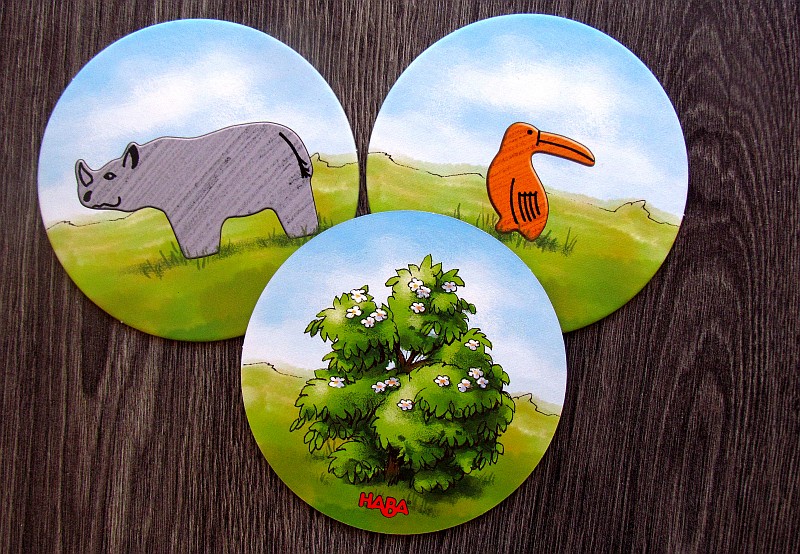 Another basic ability, that children need to train, are colors. And they are in the lead role of the third game Zoo Competition. In this game, players will need chameleon pieces (red, yellow, green and blue), but for the first time, they will also use a board – the one with eight slices. There will be players’ pieces running round and to start, every player can choose one animal to represent him. The player simply takes a bag containing four chameleons. He draws one and must correctly name his color.

To be successful, however, a small player must also be able to calculate the number of indicators of the same color found on the current position of his piece on the big plan. This is also the number of steps a player can move forward. Counting, color recognition, but also happiness comes into play. This decides, how far the player goes as a reward for the right color name. The game is slightly random, but the main addition is again its educational element. 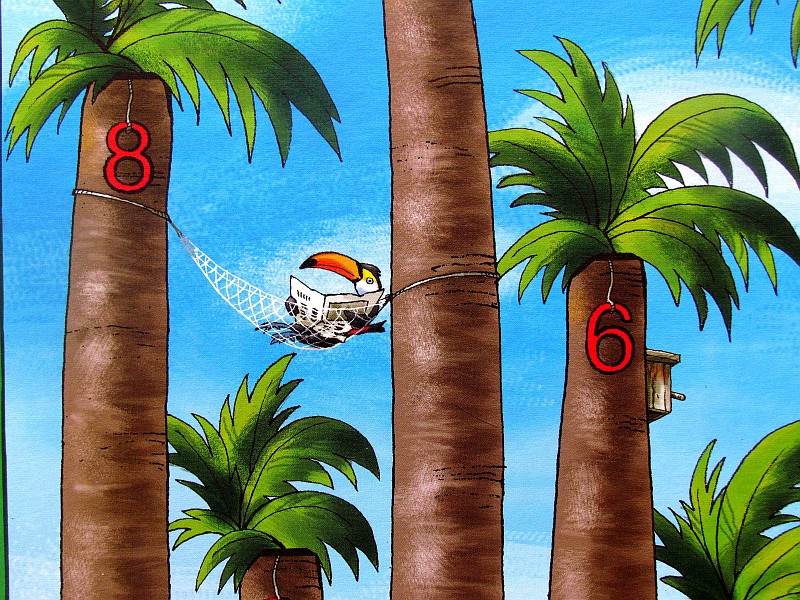 In the fourth game, shapes return to the game, but this time they are geometric. They represent monkey toys, which the children draw from a sack and try to identify by touch the shape, that is currently wanted by the monkey. The particular monkey is again selected by nurse Tim, who runs around. So in this game, it’s not just about being able to create a shape in your mind by touching your fingertips, but also about being able to name it.

Then another element comes into play – memory, where a complete set of twenty-two giraffes appears for the first time. Players here will draw one of the eleven pieces, count its pips and try to find the corresponding giraffe from the second row with the same number.

Other games continue to complicate and add combinations of everything we’ve learned so far. Interesting is the game number nine, where players divide apples into rows by number. They learn to compare numbers and order them correctly, which is also a place where it is necessary to emphasize the suitability for children from the age of four. It is clear, that such ordering simply requires a little more ability. 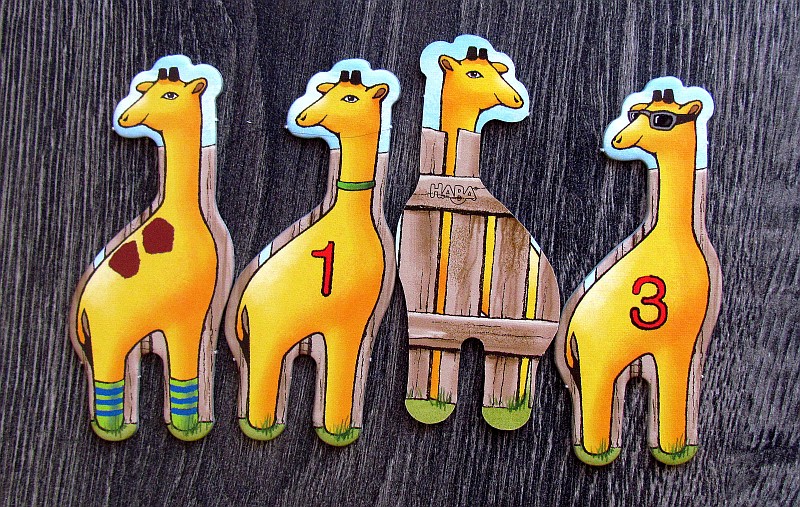 It’s always better with animals. They do company to children in each of the ten games and each time ina little different way. This makes it less evident for the children, that they are in fact learning through play. And here the processing is really precise, from illustrations to wooden figures.

Each game is really different, which means that in the box you get a huge portion of fun for small playful animal lovers. Above all, however, the individual episodes are designed to test different abilities of children and allow them to train it. And to make matters worse, some games also offer difficulty levels. Overall, the variability of the box is enormous given the target audience. 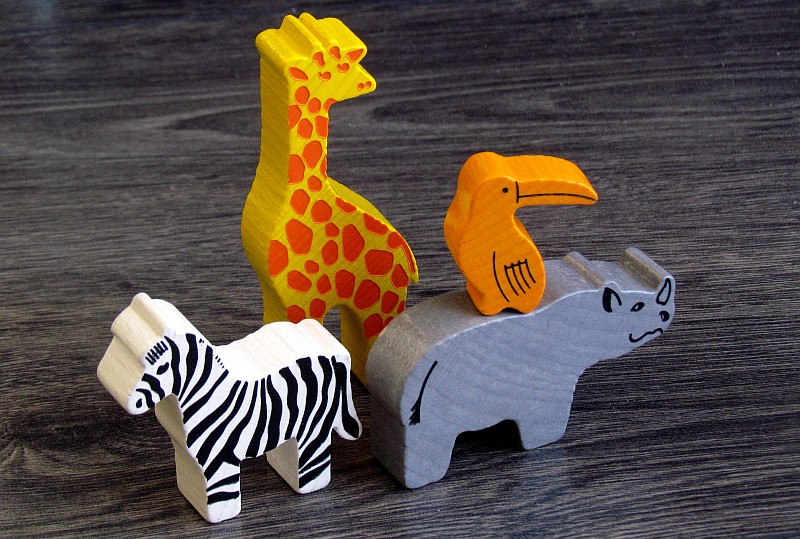 Mein erster Lernspielzoo is a magical set of games. If you want to teach children all the basic skills, then it’s the perfect companion. It targets the very smallest audience, but also parents, because they will enjoy the overall workmanship and opportunities. Mein erster Lernspielzoo, however, can appeal to children mainly due to clever rivalry and woodwork.