by Dušan on 08. 10. 2019
0
Doporučení recenzenta
previous article
Review: Chronicles of Middara Unintentional Mallum Act 1
next article
Review: Hexplore It - The Valley of the Dead King
Contents 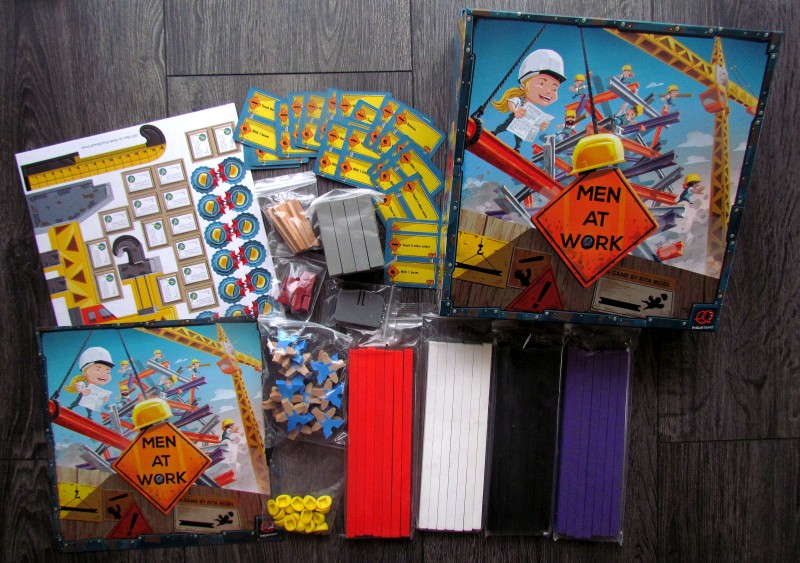 Maybe it just looks like ordinary, boring work. But if you have a good team, you can also enjoy it. You and your colleagues can start betting, who can climb higher and put the construction boards there. It is only important to be careful, that such a game does not unnecessarily damage the building. A little carelessness is enough and it can turn into a mess.

All players will be part of that building as soon as they purchase Men at Work board game. This is a novelty by Plan B Games and Pretzel Games. The game was invented by Rita Modl and in 2018, her work first appeared among the players. Esdevium Games is responsible for distribution on the old European continent.

The box comes in standard square size and on the lid, we can see the site manager controlling the construction. Behind it is a crazy building, on which several figures are balancing. Players will be able to create something similar by themselves. In addition, they are provided with a set of wooden building elements of different colors and dimensions. They simply spread them on the table, along with the measuring tool, workers’ figures and their helmets. It is also important to shuffle the deck of cards and hand the rescue hook to the starting player (it will be passed, marking the active player). Also tokens of employee of the month are needed and will serve as a reward. Each player then receives three security certificate tokens. 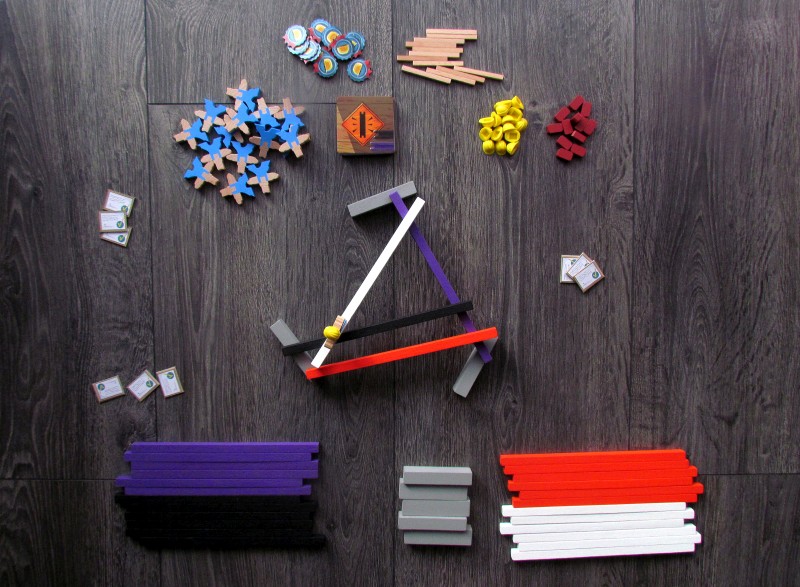 At the beginning, players prepare their base. According to the rules, this responsibility is given to the youngest player, who takes three basic gray stones and places the first four crossbars on them. From then on, everyone will take turns in building efforts.

Simply rotate the top card of the shuffled deck to reveal the assignment. It is a combination of the back side of the top card and picture on the reverse side. The player not only knows, whether he must add a worker figure or a new building element to the construction, but the card also tells him clearly where, how and under what conditions he has to add the new part.

In this activity, the player can use only one hand and try not to drop anything. If this happens, it is counted as an accident, for which the player must hand in one of his safety certificates back to the bank. The color of the new addition is also prescribed. 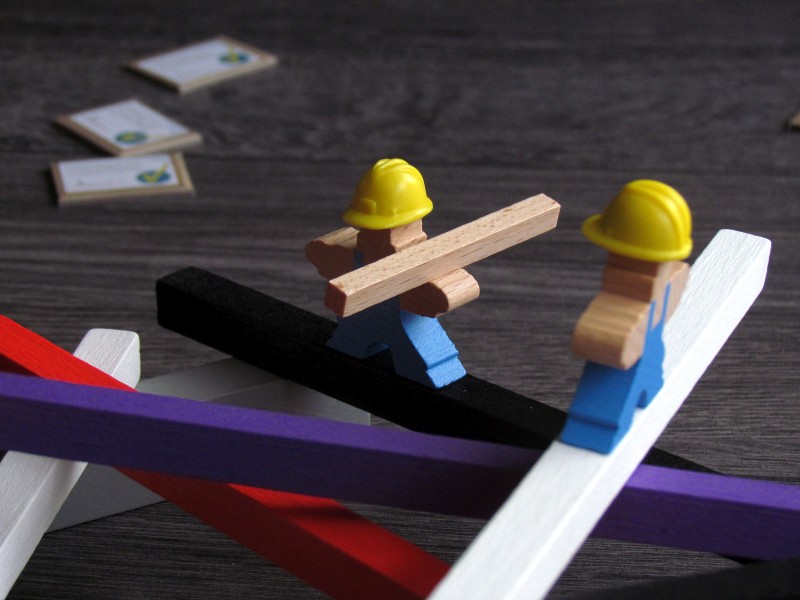 Initially, players build just for fun. Only later in the game comes the card of their boss Rita, which is added to the deck at the beginning of the game. From that moment on, players are trying to impress her by adding new elements to the already large building. But its not that easy, because they have to become new highest point on the huge skyscraper. For such success, the player is immediately rewarded in the form of employee’s tokens of the month and takes him one step further.

Whenever player makes a mistake, his turn ends and its up to the next player to do his own task. If someone makes a mistake, whoever goes next has to clean up all pieces touching the board first. Only then can his own turn begin. There, player tries to continue construction while respecting the rules.

Men at Work is a great construction game, that will test the players properly and especially has tremendously simple rules. The process of the round is written on the cards as is always a little different, so you only need to know, what the game is all about, to start playing. 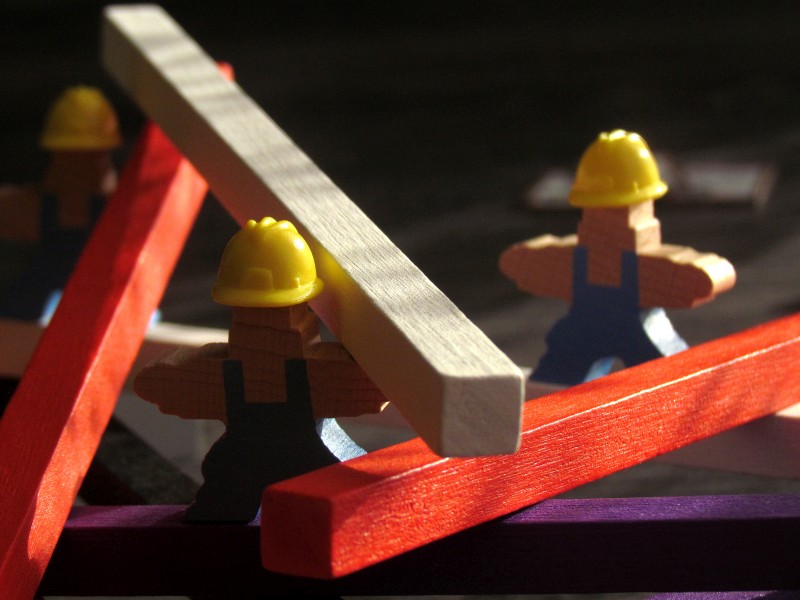 In the beginning, it’s all about preparing a skyscraper and doing its lower floors. Players build, but they have no chance to earn points. Instead, it is their job that the whole creation does not fall and they do not lose one of the valuable three lives. Thanks to this, the building looks always different. These are needed mainly at the end of the game, when they are really building on breakneck places. This is due to constantly changing tasks from the cards, but everyone has at least partial freedom in choosing a place.

In addition to the type and location, the cards also specify the color to be placed. It is precisely with shades, that there is often a condition for placing a new component in the building. Generally, the combination of cards is enough, so you will constantly solve the laying according to different conditions. And that’s good, because it keeps you on your toes.

Figures have completely separate helmets. This is great, because the game works with them and forbids anyone from placing girders on their heads. Instead, they can be anchored anywhere else, even on the hands or arms of pawns. The game always gives players a choice of whether they want to take the risk, or prefer to stick with caution in the current round. 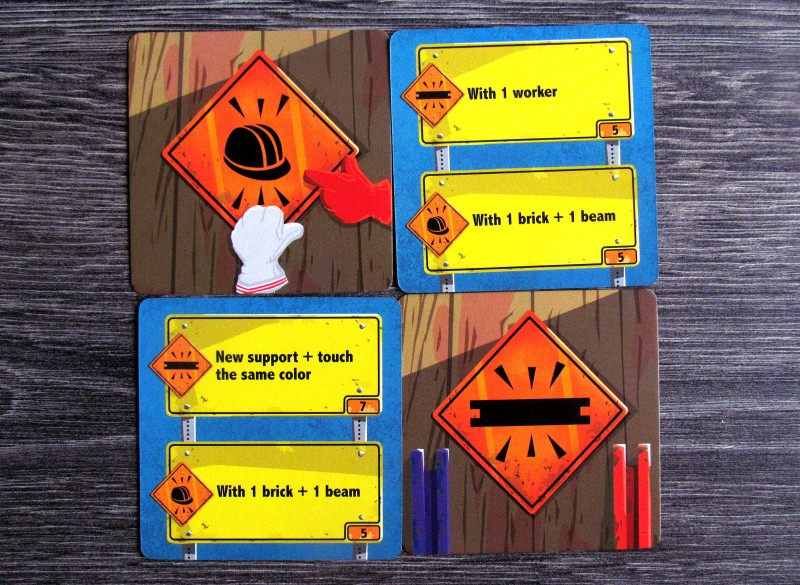 It is great, that this game offers variants. We really like the version, in which players have two extra cards in hand from the beginning. You can use them at any stage of the game to replace part of the assignment and thus get rid of any unwanted task, which may not be useful even from a tactical point of view.

Games are not unnecessarily long, because since the boss is revealed, everyone is fighting hard for points. Instead, the game may also end by eliminating all, but one of the participants. It only depends on the situation. Placing and staying in the game is not nearly as easy as it might look. Nevertheless, for the sake of simplicity, we recommend the game to children and families. The advantage is the already mentioned time around half an hour and functioning in all numbers.

The only drawback is the elimination of players, which forces someone to just watch the others run to the finish of the best builder. If someone is clumsy, then this can easily happen. But Men at Work will quickly teach you how to do it right. 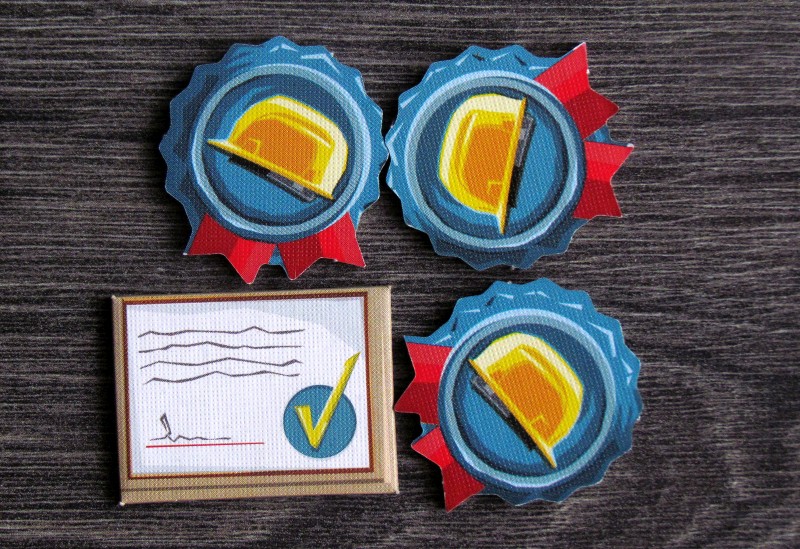 The workmanship is absolutely luxurious. Game looks great on your table and its design reaches the level of the famous Tokyo Highway. The pieces do not touch the ground, because they have their own bases. Instead, according to one variant, you can also use bottom of the box as building ground, which makes the game a bit different again.

Thanks to its excellent simplicity, Men at Work has become most popular construction game in our midst and surpassed the popular JunkArt. The combination of figures and sticks is great and helmets give the whole experience the necessary dot. Men at Work is a treat for anyone, who likes to build something and compare his skills in this activity with others.

In Men at Work, you will first prepare the foundation of the building without much pressure to win. Risk will come only in the second part of the game. From the beginning, however, players are given card tasks, that they have to listen to. The game has wonderfully simple rules, but it also offers variants and enough freedom for the participants themselves. The only negative element is the possible (and almost certain) elimination of some less skilful players. Overall, Men at Work is an excellent construction game that is a joy to play and test your skillful fingers.

Review: Dungeon Degenerates Hand of Doom – doom for all gourmets

by Dušan on 27. 04. 2020
The whole country is rushing to hell. The prophecy clearly states, that soon the hard fist of evil will fall upon the Earth and the end of the world as we [...]

by Dušan on 04. 09. 2019
People love to guess and solve various mysteries. But for some, this is not enough. They need a bigger challenge. They are looking for like-minded [...]
Comments
Leave a reply