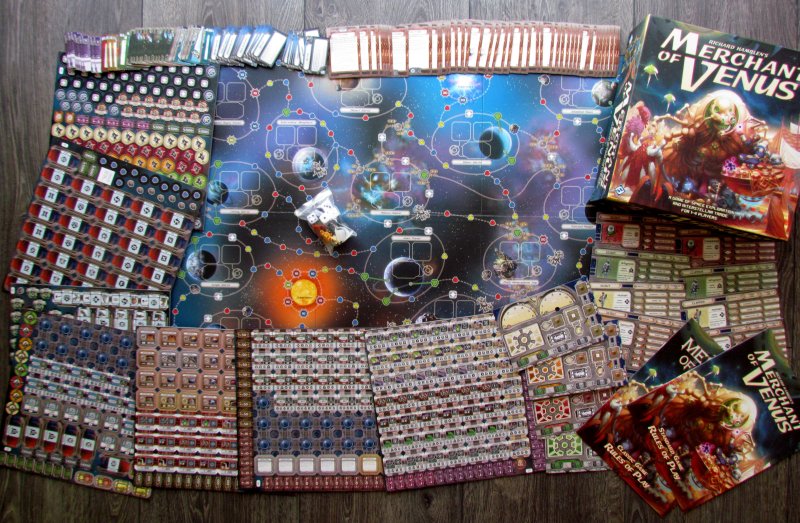 Space business is finally thriving. Stars house countless different races, who all have one thing in common: everyone needs something. And it does not matter, whether its bananas, snow, pile of slime or electronics. This is exactly the right moment to buy a spaceship with a pretty large cargo space and hit the road.

And your can count on it – you will have your ship as well as the desire for profit. It is all waiting for us in board game Merchant of Venus, created in 1988 by Richard Hamblen and loaded to the brim with stars and adventure. But in 2012, it was made into a whole new version, which was adapted for modern players by Robert A. Kouba. As if the contents of the box itself was not enough, publishing company Fantasy Flight Games decided to combine both games (old and new) into one box and allow players to choose, which one to play! All this with illustrations by Henning Ludvigsen.

On the cover of this big and heavy box, we find strange alien entity, that is just making selection from some cosmic catalog. We find ourselves actually a bit of in its skin (well, is that skin anyway?), because once you open the box, too many different impressions roll out on you. The main and most important is clearly the board. This time, its two-sided precisely to allow playing both original and new version. Map in any case shows us part of a galaxy with a variety of planetary systems. All are variously linked together by spaceroute lines and have a lot of symbols, which are used for quantification of space travel. 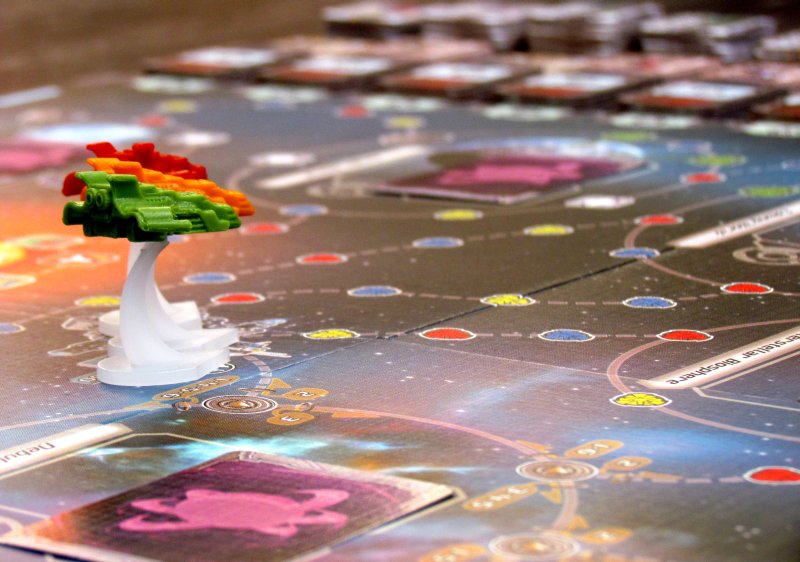 Game also includes a set of boards for each participant (made of hard paper). There are two indicators on it (laser and shields), but also a place for laying dice and various improvements. You will most certainly be looking for miniatures of boats (and will find them with plastic stands) and then cards. They will make us familiar with pilots, but also with the actual races (first contact cards), but part of this package of two sizes are also missions, encounters and rewards. Nor should you miss flood of tokens, which are not only classical credits (currency), but also fame, passengers, spaceports, pirates or production (many of them are race-bound). There is really a lot to look at and it does not make sense to list it. But it is clear, that part of it are also five dice – four white dice of speed and one purple effect die.

Players can each pick a ship. They receive board and a corresponding colored tokens for missions and space bases. Everyone will also receive some initial fortune, secret mission and especially choose a pilot, which will drive their vessel across systems. In each such unexplored planetary system, players randomly place one first meeting card and all race tokens are deploy along the left side of the game board in rows based on individual race numbers. All other cards and tokens create a reserve on the table and game can begin.

Each player’s turn is composed of up to four possible phases. First and crucial for each trader in the universe is movement. First, he should determine, in which direction will ship move in vacuum, but without knowing speed of his vessel in advance. Only then, he may roll a trio of dice and their sum determines distance, player is able to overcome in current turn with his ship. Numbers of the dice can also be used for navigation, which is similar to intersections back on Earth. To make some turns, players needs an appropriate value. 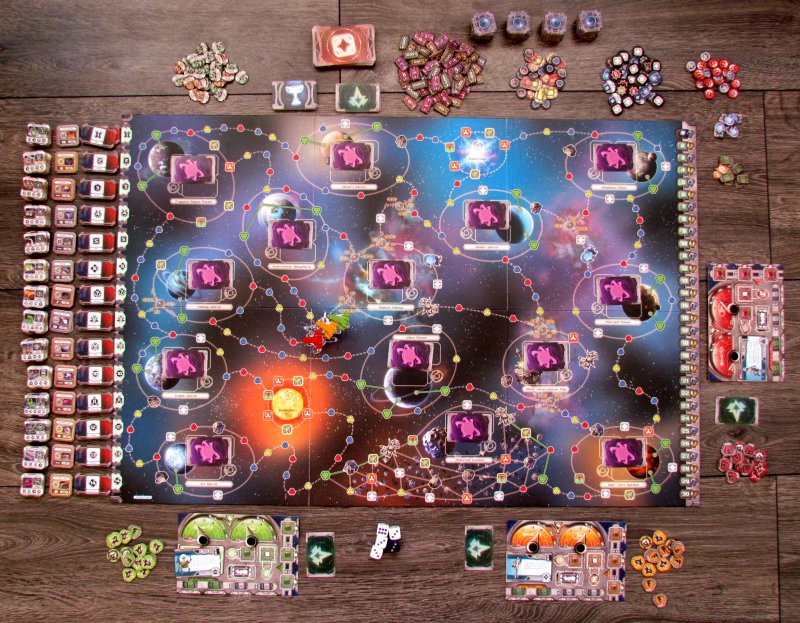 Whenever a ship arrives in orbit of a system, player can explore its race by revealing (if not already) first contact card. Based on this, he takes appropriate tokens from the reserve and places them on that system. He then may do business with locals based on active market tile. Everything is determined by tile, that is constantly switching in a sequence and thus determining, which goods there is surplus and which shortage. At that point, player can also purchase enhancements, allowing them, for example, to accelerate movement through sectors (this is what the colorful icons on the routes are used for), make his ship invisible or equip it with lasers.

All this can be done only after landing. Well, only until someone builds a space station in their color. By docking there, players can do trading in the same way, but the owner of orbit town gets some interest. Later in the game, this can not be avoided, since station occupies position for docking maneuvers and is a good investment, so they will grow in space like mushrooms after summer rain.

Player has to place bought goods in his cargo bay, which can also be expanded for a fee. Individual materials have different space demands. This also allows players to pick up a hitchhiker, because his ferryman will be generously rewarded at finish of his journey. 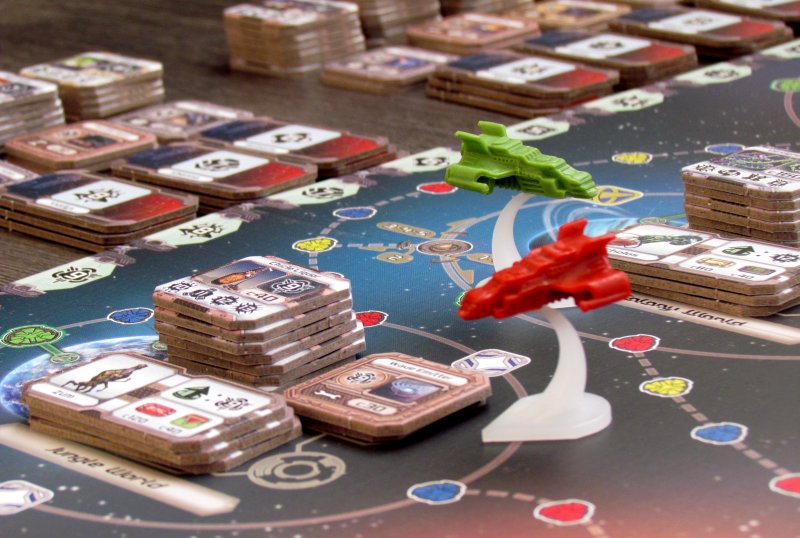 On their pilgrimages, cosmic travellers may from time to time run into some space gates or the mentioned intersections, but also into danger, that forces them to verify shields or pilot capabilities. There are even pirates, who can rob him. For winning fights (tests against skills with dice) comes some additional reward. When a player completes his business or builds a new spaceport, his turn ends and another space explorer may do his business.

This is a simplified perspective of everything, that is basically waiting for players on the whole space map. Once the thirtieth round is played, game ends. Players can now aggregate their victory points for glory, that are awarded for ship upgrades, completed missions, but also for combat and fast passenger delivery. Small bonus comes even from remaining cash. Whoever gathered most points on his stellar travels is winner of the game.

And now it gets interesting. Merchants of Venus is a game, that builds on the first experience very well. But you should not mind, if you meet some bad luck bumps along the way. That’s inseparable part of this experience. Just like the fact, that you practically can not plan during first turns, because races are hidden and discovered only by visiting that system. 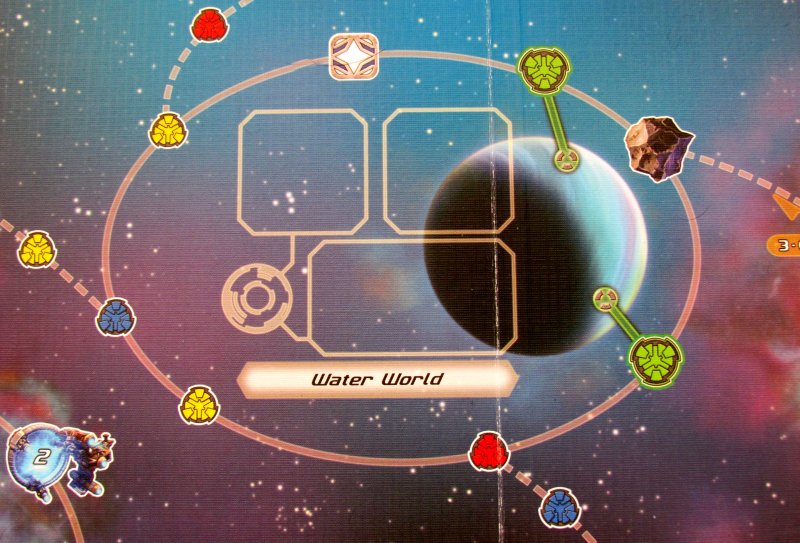 But precisely this feel of the new, unexplored worlds in each game is the attraction, that makes you want to enjoy this game again and again. And even though the game itself is quite long and wait between turns are also not the shortest ones out there. Standard game still can be played easily for several hours (and we are not talking about two), but its still doable in two hours from time to time with less players.

Original game (hereinafter referred to as classic game) is substantially simpler, although again has some specialties in addition (e.g., ship levels). Rules are understandably combed and slightly modified not to discourage current players by the 80’s style. But overall, classic game is faster in all directions, which is a bit of a surprise. But it may be because the fact that it lacks many things that are new in the 2012 version (glory mission, drilling). This makes standard game overburdened with many small rules.

Each of the versions plays quite differently and they both stay attractive in they own way. Original is surprisingly less random (for example, instead of dice, you pay credits to deal with hazards) and, therefore, more tactical. But it lacks many interesting details, that make the new version into an epic experience. Result of these new details is also monitoring of minor rules and handling tokens. Ambivalence of entire box is quite palpable and each player might like different version of the game. You just need to find the right group, that will be happy on one side of the board with you. 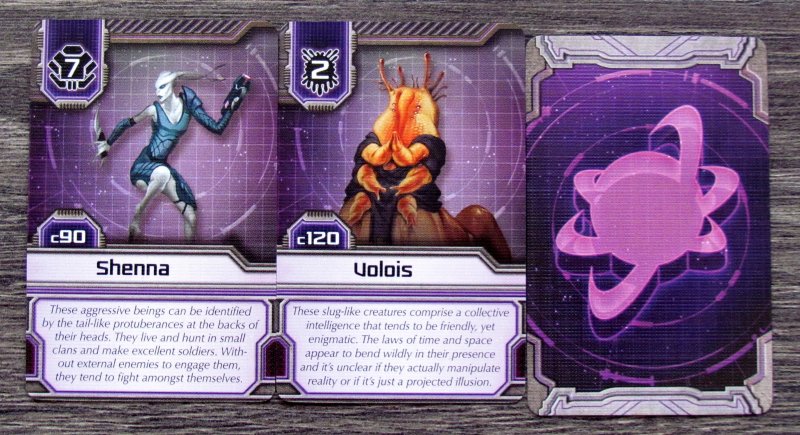 Merchant of Venus offers a number of ways to gain victory points. You can do something from each, or concentrate on a few options. In both cases, you have a full chance to grasp for win at the end. But overall, your success demands luck. Just one event, for which you are not prepared or bad rolls for the move and all efforts can be thwarted.

Big surprise for us was, that even such an extensive game is playable without problems in two. Although you should anticipate, that the plan is more empty, but actual discovery and free map is contrary reward for all those, who love to explore. We enjoyed the game completely even like this and the whole experience is even more dynamic, when you do not have to wait for turns of other rivals. But more players in turn pushes life in the galaxy to another track and has charm of its own.

Processing is outstanding. The game looks absolutely stunning and will probably dazzle most lovers of the universe with map itself. But the great things to look at are provided even by a pile of cards with aliens (we remember you, Cosmic Encounter) and it all looks from beginning to end really epicly, but in doing so, entire game still retains functionality. 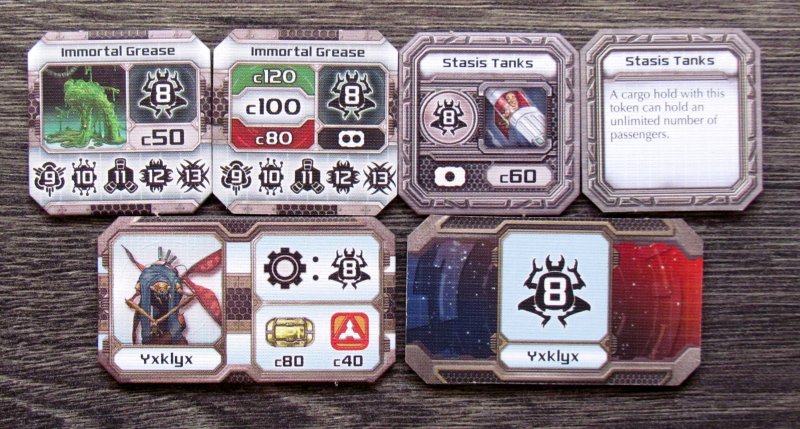 Merchant of Venus is a game, that makes an enormous come back. Best decision, when reissues its updated box was keeping both versions inside. Players themselves can therefore decide, which version suits them better with its rules and style – thoughtful with bigger level of control or more complicated with larger portions of luck? Try it for yourself and decide, because this space adventure of becoming Merchant of Venus is definitely worth it!

+ luxuriously looks
+ epic experience
+ most of the complaints are adressed in second version of the game
+ surprisingly simple (but with a lot of small rules)
+ more ways to gain points
+ trading in the universe, what are you waiting for ??!

Merchant of Venus will let you wear skin of merchant, who is trying to satisfy all the races in the universe by delivering them their wanted goods. Along the way, he may encounter many obstacles. But in the end, he must always think only and only about his own profit. This is hardly done, when bad luck is standing in the way. There is a new version of the game, that is more complicated, but offers a truly epic (and long) experience. Still, there is also a place in this game for players, who focus them on tactical planning or players, who love classical version of the nineties. Merchant of Venus is a game, that will surely satisfy almost everyone and that's, why you should not miss it!