Review: Mercurius – no one can ever deny soul of a trader 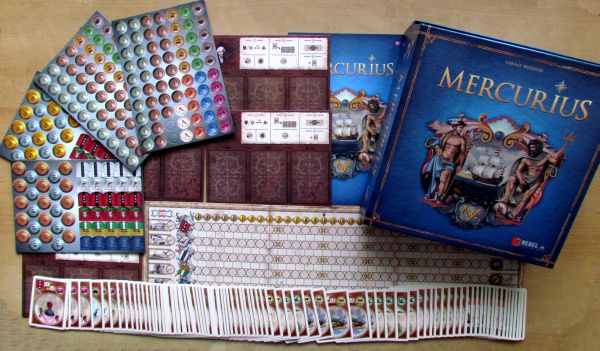 Welcome to Amsterdam in the seventeenth century. Stock exchange, shares and dividends are still music of distant future. Or are they not? Even if they were, it does not mean, that traders could not invest and capitalize on goods by other means. Financial and profitable thinking is rooted in the human brain for centuries, it evolved by various transactions and gradually into today’s crazy and overcombined state, where simple human only floats on the surface, without a chance to dive in..

But lets go back to the basics to the time, when market was much more simpler, than today. Basis was created by imports from the East. Specifically, several buyers have decided to invest in the company called Dutch East India Company and compete with each other, who can get the most out of imported crops the greatest property.

You do not have to worry about your finance safely kept in the bank, because it’s ultimately just a game. It’s called Mercurius and designed by Łukasz Wozniak. Since the game is published by REBEL.pl, we can be virtually certain, that the illustrator is again and again Jarek Nocoń, which has a little easier position this time, than with for example Slávika (review). This business game contains more graphics and illustrations here are scarce, especially on board and some cards. But when it comes to pictures of goods, there are really nice and well done. 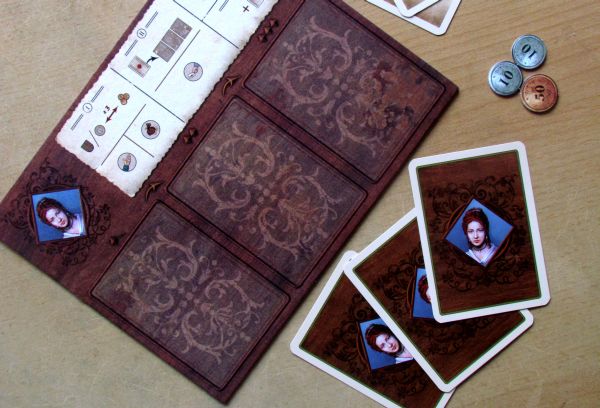 Game is hidden in a fairly large square box, which includes illustrations of gods and remote ships carrying your investment, containing no big game board. Greatest component, which is inside, is board of trade. You will find a total of six lines with many round spots on it. Points on each of this scales are numbered from one to the top 25 (first and last value is repeated several times as a cushion for everybody, who reaches this spot).

Each of them contains equal two pieces of information – share price of one of six competing agents (each in a different Dutch city from Amsterdam to Rotterdam), and specific value of traded commodities. Shared line means, that it is main product of this office.

In addition to this large board, where players do not place any custom token or piece of their ownership, box also contains a player board for maximum number of opponents – five. In the upper left corner of this smaller boards, you will find a portrait of the head of department, right upper side is taken by icons, while at the bottom is storage space for three cards of price changes. 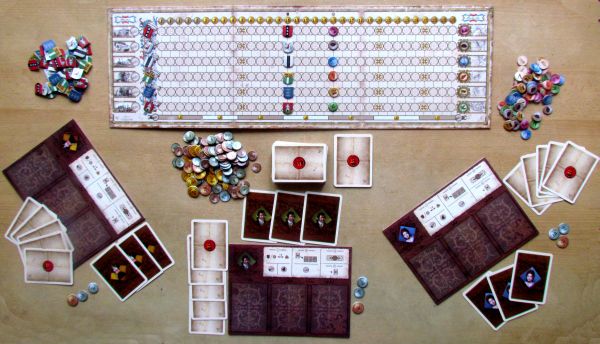 These 72 cards are next on our description list. Their text includes a change in the positive or negative direction for shares of the company, but also for specific goods. One always proceeds in one direction, while the other in the opposite, and it may not be even numbers on one line, but from different lines of trade board as well.

For each player there are three action cards (dividends (Yes! Here they are, they knew it!), news and black market), but nothing else. Instead, you get a stack of 60 tokens in the shape of roofing, representing a share in the said offices and other sixty round tokens directly relevant to the various goods (ten of each type).

Last and most important is finance. Wealth goes in the first place in this game, and therefore there must be enough coins. Five values ranging from one to one hundred. And hundreds of them together after punching them out. 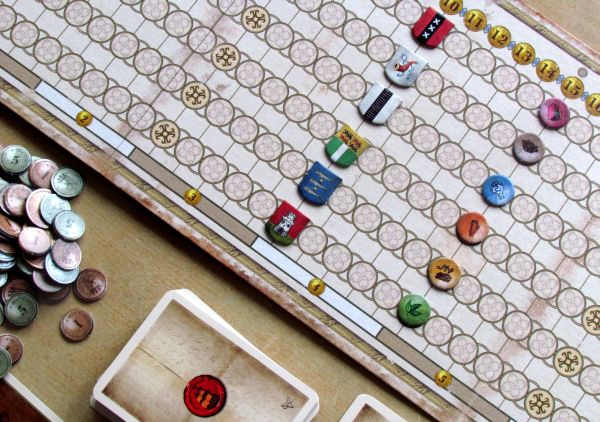 Each player then gets his board and three action cards in his color, with portraits matching person in left upper corner of the board. You must also have some starting capital, which has a value of 70 gold.

Most shares and goods tokens start the game in a pile on the table, but their offer in the pot varies according to the number of players in the game. But you always take one marker for each species and points its starting value at the appropriate scale. All office shares have the same initial value of ten. Its similar with commodities, which are starting all on number fifteen.

Seemingly complicated preparation relates to price change cards. All of them are shuffled, twelve of 72 are then removed and create a backup package. Remaining sixty cards serve as the base draw pile, from where each player is dealt five cards. And since we finally got something as players, we can start gaming! 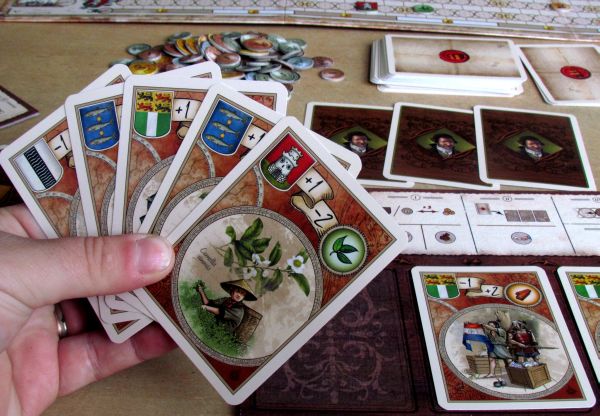 Players take turns and each of them performs all his options consisting of a four activities, until next rival gets his chance. First two are longer, second half of turn is only cosmetic and status changes. Everything starts with opportunity to buy and sell, where you can easily spend your money for shares of any office or buy a specific product with hope, that its price will rise.

Buying and selling is regulated. The more you buy of the same kind, the bigger is your price for each piece of this commodity. While one piece (goods and share) is equal to current market price, once you buy two pieces, each will cost you one penny more, and three (= maximum to buy in one turn) will raise price of two guilders (game currency). Similarly works also sale, but here is your price lowered with a larger group of identical goods sold and its reduced again by one or two guilders.

Second important phase of your turn is playing a price card on left side of your player board. Already in third round you will fill your board with cards, as they are gradually shifted towards the right and new ones are always attached to the left. This means, that card is valid for every three rounds, then its effect wears off. 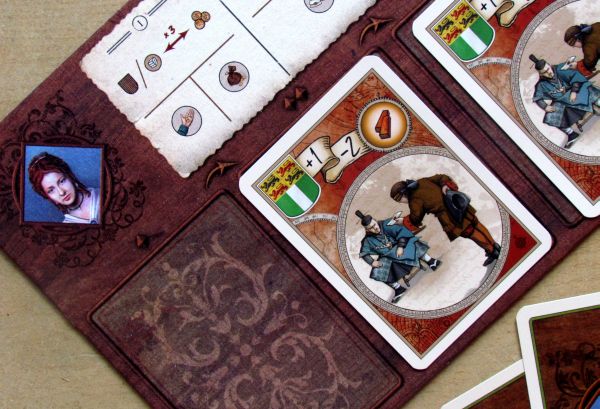 Although this phase is mechanically very simple and it is only this playing of cards, where its importance should not be underestimated. You should make their choice very carefully, because next three rounds it will affect not only your products and shares, but your opponent’s as well. These prices are in addition shifted by the value each turn again and again, so in fact your card influence should be multiplied by three, when considering its impact.

According to cards trio on your board, you change state prices (= shift their pointers) on the board towards plus or minus. Now all that remains in your turn is to move your cards to the right by one. This means, that card in the right box falls out and its influence will no longer apply next round. At the same time, you create an empty space in the left field of your board for playing new card, when your time comes again. To close all your actions, you draw a new price card in your hand and pass the word to the next player.

Match is coming to an end, when you run out of cards in drawing deck. It does not get shuffled, but instead you have last two rounds ahead, during which you must turn all your plans into reality. For all your shares and goods you receive money based on their current value, and player with greatest asset is winner of the game and the richest Dutch trader. 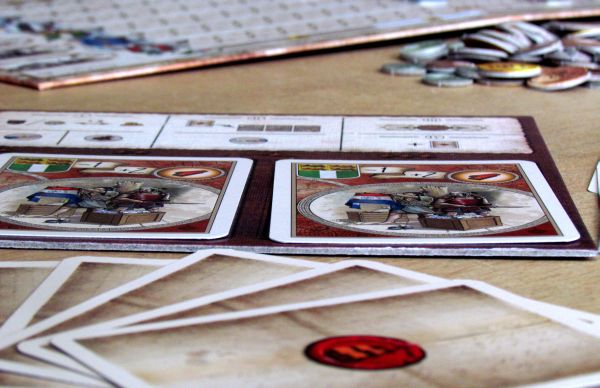 Mercurius is interesting economic game, where you find seemingly simple mechanism deciding market changes. Now this is the central element of the game and its surprisingly fun and that’s enough. Scrolling price tags here and there through playing cards is interesting and exciting, although it may not seem like that, when you look at the game for the first time.

Everyone knows approximately, in what direction commodities will shift in the following rounds (based on played cards), because each card is valid for three rounds forwards. It is very important to keep track of all changes, allowing you to use all opportunities to buy and sell most profitably.

The game excels in tactical options. Despite the fact, you have quite a little game options: draw a cards and select it, you affect not only yours, but also opponent’s profits. Once per game, you can also receive dividends and take further action cards.

The main chance and possibility of profit is based around prices. Each card moves one value up, while the other goes downwards, so it rarely happens, that prices would only uncontrollably grow. That’s why there is a safety zone at both ends.

Mercurius is despite its relatively dry topic quite fun, at least for thinkers. Game does not take extremely long time to complete, so you will not have enough time to get bored. Additionally, you must be constantly on alert and even outside your move, you must pay attention, because you might miss some important information.

At the same time, this is also the only downside of Mercurius. Sometimes we get lost in tracking of all the pluses and minuses on the cards of other players and some players may get overwhelmed. The game could have other indicators, that would help you to monitor changes happening in next round, but there is nothing easier, than to add some cubes to the game.

Processing itself is really good. Cards have beautiful illustrations. Only those small tokens are not exactly the most lucid way to monitor prices of shares and products. Surely it would be better, if creators replaced it with some pawns or something like that. But it is too late for that now.

Mercurius is, despite some technical shortcomings, interesting game for those who like to think, plan and strategize. To win a fortune, you must make your way mainly with thinking ahead in time. Do not miss your unique chance to become a really rich man!

+ two-sided market influence mechanic
+ nice and simple graphic
+ cards influence market for three consecutive turns
+ its all about money in the end
+ no luck, everything can be influenced
+ the more you buy or sell, the worse are terms

- too little tokens, should be replaced by pawns
- sometimes its difficult to keep track of all changes

Mercurius is game filled with shares and products imported from faraway lands. Its value is constantly shifting based on events, you alone cast on the market. Chaos and luck, you have the outcom in your hands. Trade is influenced by playing cards with positive and negative values, changing values for three consecutive rounds, before they leave your player boards. You can do many benefit or hard in that timeframe, but their values are also connected closely with cards of other players. You have to have constantly good overview of price developments, which is sometimes a pretty harsh task given number of cards on the table. Match is fun with all player numbers, although result lies mostly in your hands and indirect reaction to your rival cards. No direct conflict is involved. Everything is about timing, so tokens move in the right, wished, direction. Only those tokens for marking price can be a little more visible and replaced with some wooden pawns. Mercurius is really well done tactical game for all natural-born merchants.