by Dušan on 18. 07. 2013
3
previous article
Review: Mage Wars Forcemaster vs Warlord - new duel is on the table!
next article
Review: Construction Zone - building in cards
Contents 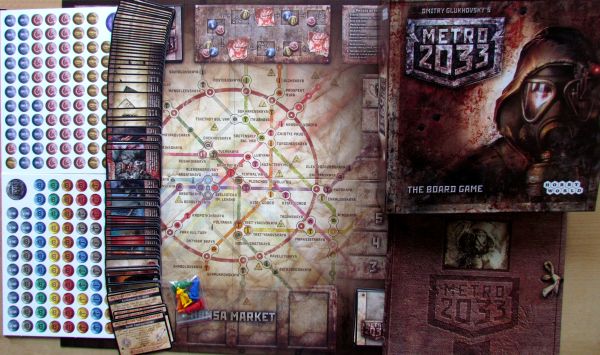 Beneath the romantic city of Moscow lies network of tunnels. Once it transported daily millions of people daily. But these days are long gone. Since then, countries were affected by war. Not only Russia, but the whole world. Nuclear bombs have destroyed everything we hold dear on the surface. Radiation filled even the smallest cracks and finished the work of destruction.

In some cities, there still remains life. And one of them is Moscow. A former metro stations remains shelter for survivors. They also have their own cities built around those stations. Stairs to the surface are boarded up. Cars and suits are still running. They bring people here and there as they always were meant to do.

This is what will possibly happen in twenty years from now. But if you think, such an experience will change mankind, you are really wrong. You should ally yourselves together against the growing threat of mutated creatures, through which nature tries to cope with disaster. Instead, they are fighting with each other for control of the individual stations. So we are left with no choice, but to join a fight. Or die.. 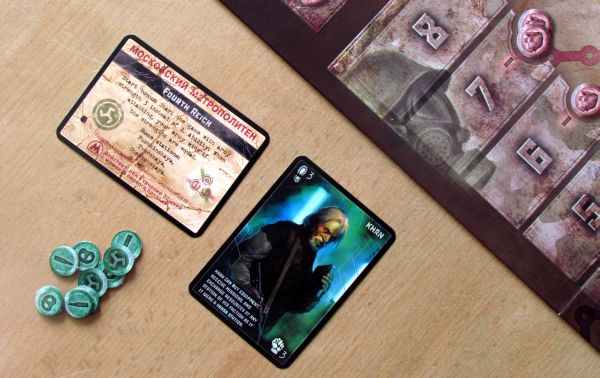 You will be surprised with figure with a gas mask on the cover. This is the world of Metro 2033 necessary for survival. Let’s hope inside box, there are no toxic material. Hold your breath, just to be sure. So go for it!

In the first step, we unfold game board, that wears map of the Moscow Metro. There is a lot of stations and your head will go around of all the dots, but do not get alarmed. By using colors, most situations are perfectly clear. Around the circular maps are two scales on sides – army to the left and to the right victory points. Above is round counter and below market.

When you quickly peek under the board, there is pile of cards hiding with a variety of different purposes. Smaller decks contain factions, heroes or laws. Two stacks of cards represent danger lurking from the deeps, eighteen pieces each (for the first and second stage of the game) and are expanded wtih another 18 cards for equipment and and 18 missions. Total sum culminates with seven fight cards on final number 98. 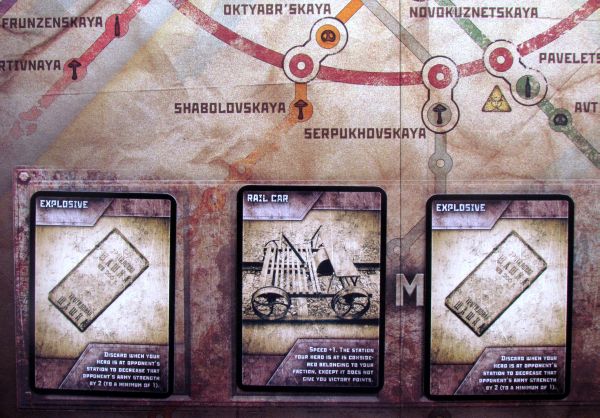 And oops, I forgot to tell you, there is not anything dangerous, so you can breathe freely. At last, you can start punching out remaining pile of resources and fourteen more for each of the warring factions. You will be cheered by six miniatures, which represent russian heroes and thus actually youself, as you travel through subway in an attempt to take control over all the stations for your people. Card with heroes also contains his portrait, his speed (top left corner) and force (lower right corner). There is also a special ability.

Heroes are independent and can be used with any faction. On faction card, you will find a list of your home stations, abilities and bonus, you get for starting the game. Also important is the fraction symbol.

The game will require you to collect four resources. There are pigs, tools and sponges, individual stations produce. They are connected by a tunnels, where you will travel with your heroes. Map contains also circled home stations and an abandoned brown ones. 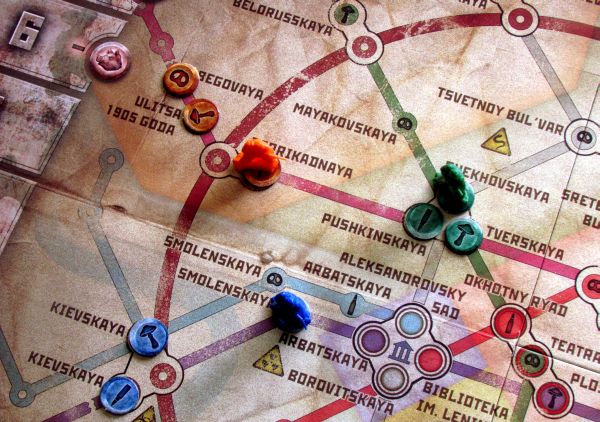 You place one of you tokens on each home station, once you start preparing the game, as they will supply you with resources during the match. You have to also choose your faction. If there is no agreement, players must select gradually and starting player has advantage of first choice. Next you place marker on the initial state of your army, which is same for all opposing parties – two. Players start also with three victory points, which correspond to the number of controlled stations.

Only now is the time to choose a hero, who is not bound to fraction. Their selection is independent and you can follow only your beliefs. The figure can be put on any of your three starting locations on the map.

On the board next to the map, you pub shuffled law deck and another deck with equipment, from which you create starting market offer by turning the top four cards.. All other decks of cards should be shuffled and along with tokens placed next to the board, and finally you can get to absorb some radioactivity, because the game can begin. 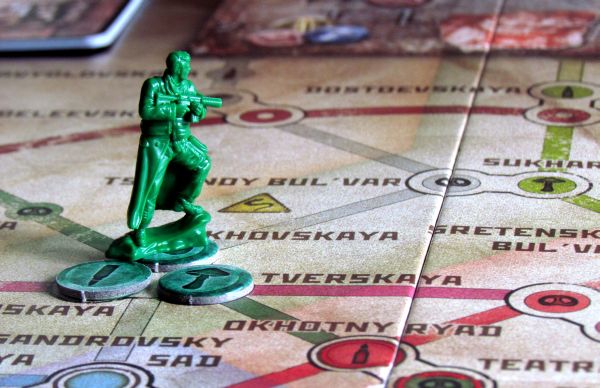 Each round is divided into five stages, through which are players using opportunities, game offers. At the beginning of each round, you will rejoice. If you find symbol of resources on current round, you get the corresponding number of tokens being produced in raw materials.

In some rounds, you will need to prevent the attack of monsters from the underground. You can send either army or hero in their way. Above all, you must choose one station, which will they attack.. Form and attack power is determined randomly by drawn card from threat deck. Each player, who successfully bounces off such a raid, gets the reward specified on the card. If you lose, you lose the specific station. This means, that you lose control token, you have on it.

Sometimes commanders of all factions meet and try to enforce new laws. Of those all together and democratically vote. That’s all the second phase is about. Number of votes is determined by the number of stations, you control. Players vote by secretly balloting and in case, more than half agrees, the law applies to all immediately. 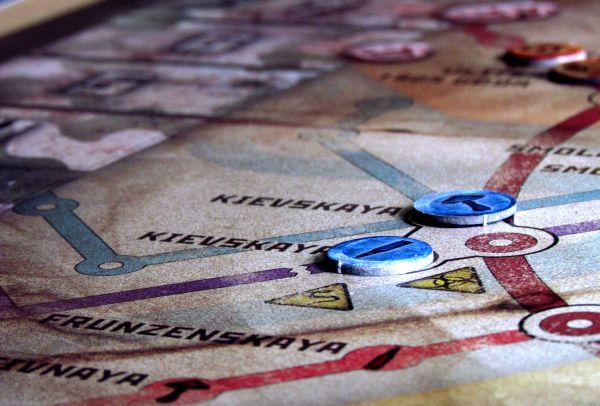 Then you finally get to action yourself and you can recruit new units for your army. At the same time you have to be pay the cost of maintaining the troops. Army force of five and less costs nothing, each additional unit will cost you one pig. For each strengthening of forces, one piglet is payed for a man.

And it’s time to fight. You can attack any neutral or opponent station, if adjacent to site under your control. Instead of bloodshed, you can send a man to look for underground resources for which you are rewarded immediately with one token of your choice.

So how is this attack done? In essence, it is a simple comparison of the strengths of both parties. Opponent army automatically defends a station during an attack, that is under attack. Movements in the basement are very fast and surprise attacks are possible.

In case battle takes place between two players (and not with a monster), then simple sum of the numbers is raised with cards from battle deck. Both opponents get three cards from randomly shuffled deck of seven, therefore other side does not know exactly, what the enemy got. This bonus card is counted to the strength of the army or hero and most powerful is clear winner. In case of a tie neither side could gain or lose nothing. The defeated army loses position, while repulsed hero must submit one card of his equipment.

In addition to the army, you have also character piece under your control. He can move through underground tunnels, but can also attack at any station. Due to this fact, you have the possibility of attacking twice per turn. Besides the traditional options hero can also exchange material and buy equipment cards (only in specific locations) and receive some new missions (for a fee).

Your main missions, which will also end the game, are two different things. You can either get ten victory points as first or control all four major stations (polis). Such a player, who fulfils these conditions at end of his turn, becomes immediately winner of the game.

Metro 2033 is a simple war game set in a post-apocalyptic underground environment. It offers easy rivalry between the players, but also gives great emphasis on the conflict. Players must defend their acquired stations and at the same time make raids to get new positions. It brings not only victory points, but also income sources.

That is being associated with a problem, because when someone has more stations, he gets more raw material and is getting stronger. The others have a chance only to join against him and try to get some stations back.

From a tactical point of view, heroes have a big impact on the game, who themselves are able to defeat even the military. Cards are essential equipment, that will help you greatly in the fight against a stronger opponent. In addition, just heroes have by far the widest selection of actions in each round and are the most important element of the battle. 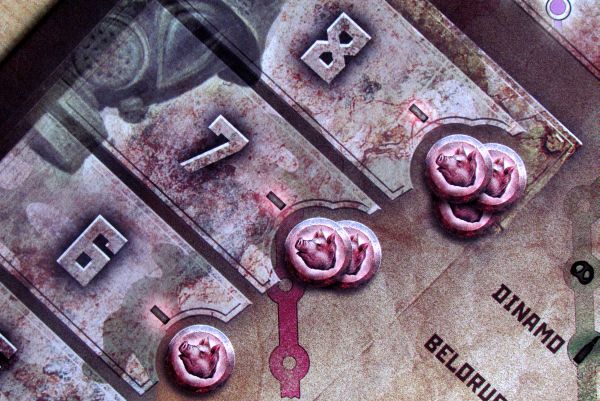 You have pair of military units (hero and army) and two attacks per round, so something is constantly happening. But leadership (depending on the above-mentioned problem) does not change much. Battles with threats from depths are often difficult, but eventually they can be defended.

Another problem is the variability of the game, that is emotionally very similar across games. In packaging there is not enough threat cards and there is nothing to clearly differentiate games apart – map and everything is the same, only heroes equipment varies. As a result, Metro 2033 may heat up especially fans of postapocalyptic world.

Game takes about an hour, but this time can also easily increase, if you meet thoughtful players. With two its not nearly as much fun and although the map is limited to a specific locations, if you want to enjoy it most, play at least with three, preferably four. Five to six players brings serious risk of long games, which does not suit this otherwise simple game well.

Biggest weapons of Metro 2033 is a powerful and interesting theme and environment. It certainly may convince many players to try it out through the above-mentioned shortcomings. Metro 2033 is far from perfection, so let’s hope, that Russian game creators will not get stuck with this game. We look forward to further experiments from them, but this was not as successful as it could be.

Metro 2033 would like to profit from postapocalyptic settings and it succeeds. Theme and atmosphere are the main cause, which get you interested into this game and keep you trying. Surface of Earth is uninhabitable and people live like moles inside metro tunnels and its ajdacent stations. And these places are subject to battles of armies and heroic individuals, who fight for materials, hire unexperienced soldiers and fill up the whole complex under ground. Game counts with common threats coming from outside world, attacking all players, who must face it together. Each faction is a little different and has its skills, but all matches will still look pretty much same and alike. There is not much ways to differentiate one game from the next. A real advantage is simple rulebook, with no blind spots. Nevertheless matches can drag on with more participants. Summed up, Metro 2033 is a mediocre game, which stopped its way in the past, instead of looking into future it tells stories about.