Review: Mimikri – a game of hide and seek

by Dušan on 16. 12. 2013
0
previous article
Review: To Je Fotbal (This Is Football) - a Czech derby versus Slovakia on the table
next article
Review: Nowheresville 2 Bandit Paradise - villains have second chance
Contents 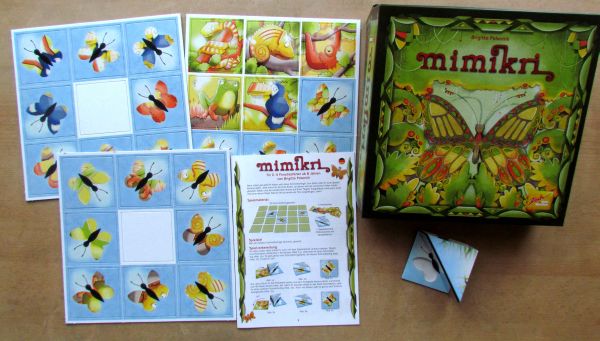 I can already hear the wings flapping and clacking of beaks in my sleep. It’s only a few days ago, when a stork settled near our pond. No one knows for how long he will be there. We all hope, he will continue his journey, but there is possibility, that he will make us company forever. I’m not the only one, who is afraid. All neighbor frogs think, it’s a bad sign and some are already started to talk about moving away.

But I certainly do not want to move anywhere. Today I heared, that there is a way to blend in with the surroundings. They said, that frogs can not do that, but I believe, that if I practice long and hard enough, I will escape hungry stork eyes.

We also got to the same pond, where an interesting group of animals lives. In addition to the frogs, there are also stray parrot and sloth sitting on branches, who recently escaped from the zoo. But there is also a chameleon, which is invisible to everyone else. He is already good in bleding in. You are holding a camera in your hand and your task is to bring evidence to the zoo, that this is a place, where animals hide. But it is not so easy to take pictures of animals, because they are disappearing a strange way. They all learned it from that ingenious frog. 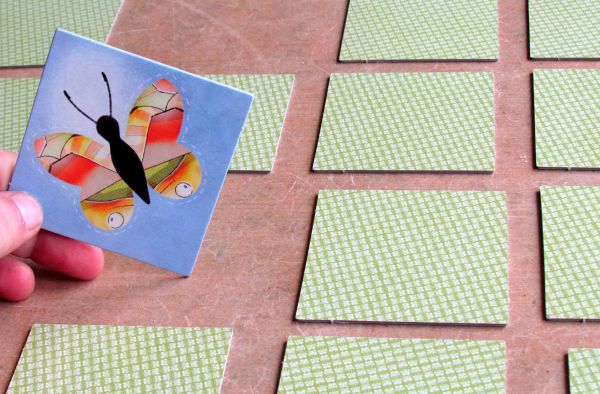 Designer behind this Mimicry game is Brigitte Pokorník and she tells a story about ability to mask accordingly to the surrounding environment. In this case, animals all looks like a butterfly shape, because it is the safest. The game was released in 2012 in Germany under license from White Castle, but primarily in the distribution of Zoch Spiele company. Colorful designs and illustrations were prepared for the game by Lena Hesse.

And these illustrations will play a major role this time, as you will learn, once you open this surprisingly lightweight square box. Along with lid flies away a variegated butterfly, which is drawn on it and you will be rewarded with a glimpse under his wings. The box contains twenty sheets with cardboard tiles, on which pictures of butterflies are drawn. But there are also with five other portraits of that wanted strayed animals.

The box also contains a rulebook in four languages – German and English are supported with French and Italian. The most important for you as a photographer remains mysterious box at the bottom. It is made of cardboard, and has a mirror on it. Exactly in the middle, you will find an opening, that allows you to see inside the drawer, where one of the cards could easily hide. And yes, it will do that. 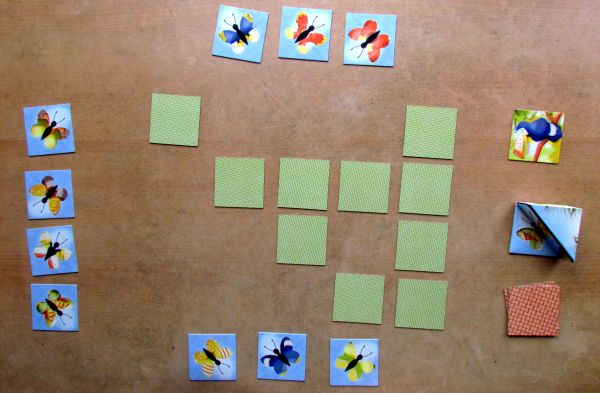 And that’s all, so you will probably be a bit disappointed by a set of components. But there’s still time for us to fix everything. You can just play Mimikri with us and change your opinion. At the beginning of the game, players shuffle twenty butterflies tiles and spread them face down in a square five times four pieces. Remaining animals with an orange back side create a pile and are put beside your camera.

A player starts a game by taking the top critter card and slide it into the compartment inside the camera. Rotation of a tile remains only up to him, even though each rotation eventually will have a different result. When the card is inside the hole, it will fill the hole in shape of half butterfly wing. Now, that adjacent mirror allows you to see the whole butterfly with its pattern, the animal chose as its pattern.

Your task is now to find a card, that hides that particular butterfly among all the tiles lying face down on the table. Initially, it will be a matter of luck, but pretty soon, you’ll be able to simply remember, which butterfly is hiding where. If you do not succeed, you leave camera lying in front of you, wrong tile in the middle stays with picture up and pass the chance to search to other players. Only when someone shows correct butterfly, all the cards are turned back. Meanwhile, you have enough time to remember distribution of pictures. 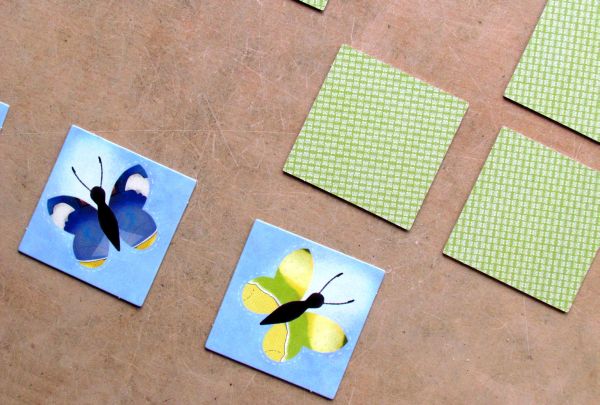 Players take one animal after another from the pile until their go through the entire deck (which is not long, because there is only five of them). In that moment, fifteen butterflies still remain on the table to be discovered. Players once again shuffle animals to form a new order and go again, but this time, next thing to remember is added: rotation of pictures, when inserted into the camera.

You need not only to find the correct butterfly, which you create by sliding the tile in, but above all you have to insert the card correctly. The mirror must not show image of a butterfly, which had earlier been caught and therefore is not on the table anymore. In such a moment, you lose a turn and camera shifts to your neighbour.

Game continues until all butterflies on the table are caught. Only when the last one finds its owner, all players may add up the accumulated cards. The best photographer will be the player with the most butterfly images. 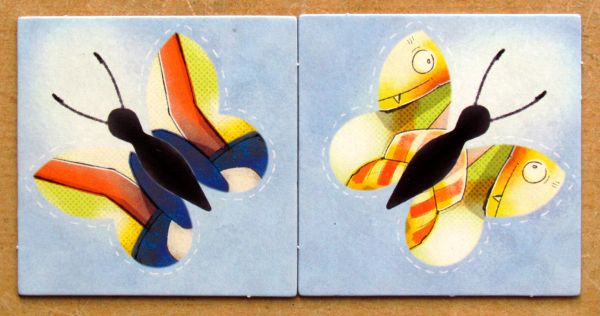 Mimicry is a prime way to get a beautiful and simple game for kids. The resourcefulness will thrill them and similarity of all pictures ensures, that you can not be sure of anything during this game. And we are not talking only about small children, but also adults.

The game actually combines basic search mechanism and memory cards into the game with the help of mirror and trimming. Because each card has four possible rotations, everything is much harder, than it looks. A comparison with memory games is quite interesteing, because when playing Mimikri, the game actually becomes more and more difficult with time (on the contrary to ordinary games of this type).

Many butterflies cards had already been taken and you have to be very careful, how you insert animal card into the camera. Each rotation creates another flutter and you can expect punishment for doing it wrong. When a butterfly is not waiting to be caught in the middle, you have to give a chance to win cards to your opponents. 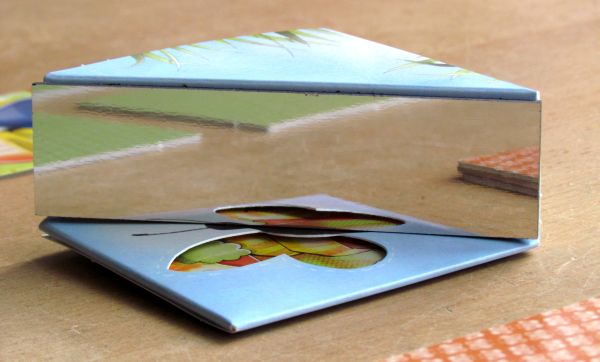 The game puts great emphasis on memory, but primarily on imagination. Later in the game, you need to correctly identify part of the animal, which will be visible through camera. Each of them has a clear pattern or color, that distinguishes it from others. Thanks to that, players will improve with more games, but not enough to stop the game from being fun.

Players compete primarily with themselves and therefore the game does not differ much in various numbers among itself. The difference can be found only in the number of attempts to obtain the cards. Therefore, for teaching the game, you should play only with two players and reduce number of animals and cards in a game by one (or four in the case of butterflies present on the table).

Game is only about remembering patterns. This makes it playable with children from six years of age up, who will love the butterflies formed out of animals. The mirror camera has a film, which protects it from scratches and it is up to you, if you remove it or not. Children are fascinated by the processing of the game and immediately want to play with reflections and compete in their search. And this should be the best indicator of quality entertainment for us. 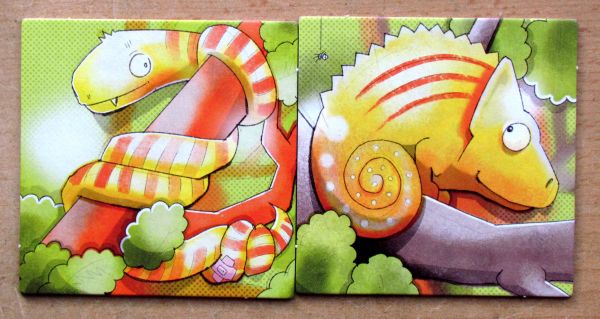 Mimicry is a beautiful child’s board game and we can only hope, that it gets more attention. The game surely deserves it with its unique and beautiful gameplay. Playing with a mirror are certainly worth a while.

+ beautiful idea and simple graphics
+ astounds children
+ gets tougher with game progress
+ mechanic with mirror (camera) is excellent
+ based on very simple rules
+ emphasis on imagination and memory
+ since six years of age
+ children game, which is challenge even for adults

- there is really no original idea in the background