by Dušan on 02. 03. 2020
0
previous article
Deskofobie S07E04: Grafický design her
next article
Review: Robin Hood and the Merry Men
Contents 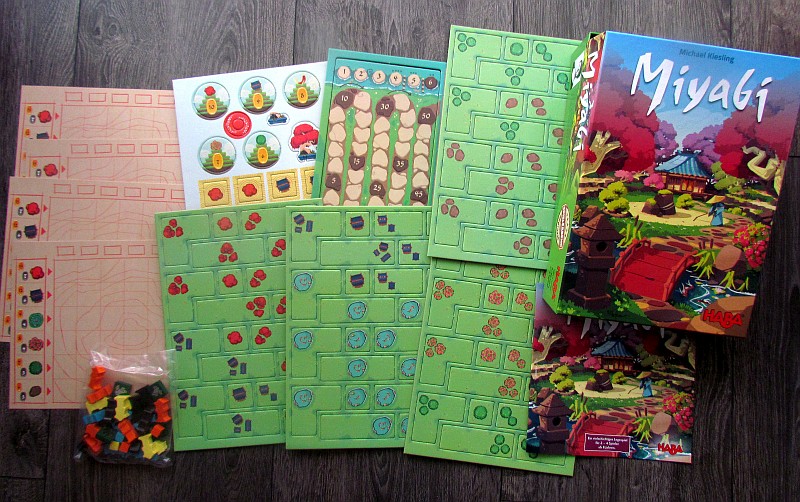 Only in a properly constructed garden can the visitor reach the Zen status. Balance is a fragile thing, that requires the right intensity of a raging stream, the ideal placement of the stones, and above all the precise placement of the relaxation pad.

It is time for the sand to settle, trim the bushes and feed the fish. There’s Miyabi by Michael Kiesling, released under the HABA family edition. It was published in 2019, including illustrations by Vieleck studio.

On the lid we see a beautiful Japanese garden, which we would also like to build. The first step is to place the scoring board in the middle together with the building token on space one. He lands six bonus tiles next to it. Individual players will each receive their own board, six lanterns and two scoring stones depending on their choice of color. One places the zero score board in the center of the box. However, the basis of the whole construction is mainly 96 garden tiles, which according to the rules players put into the box lid to draw from. 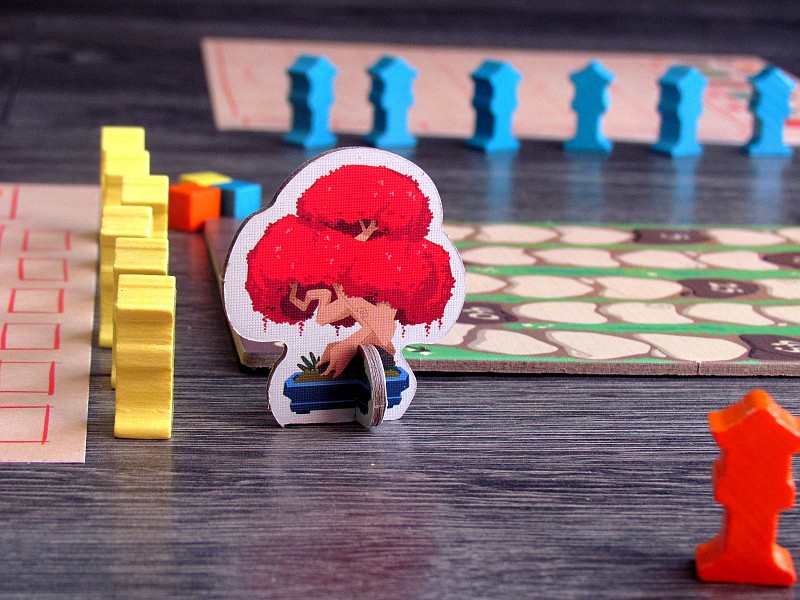 Players constantly take turns in building on their square designed for the Japanese garden, and depending on the number of participants, the whole game can take from four to six rounds. At the beginning of each of them, players prepare lanterns above their plan and then create an offer of garden tiles, again according to the number of players, made up of small and longer tiles and also a corner tile.

On his turn, the player chooses one of the tiles and places it on his game board. In this case, such a tile must always be located within the area six times six spaces. In doing so, however, the object shown above the tile must be placed in its proper row and nowhere else. But this is not the end of the limit. In addition, the same element image must be in the column, where the lamp box is still available. This is occupied as soon as the player has placed the tile, which means that only one symbol can be placed in one column per turn. 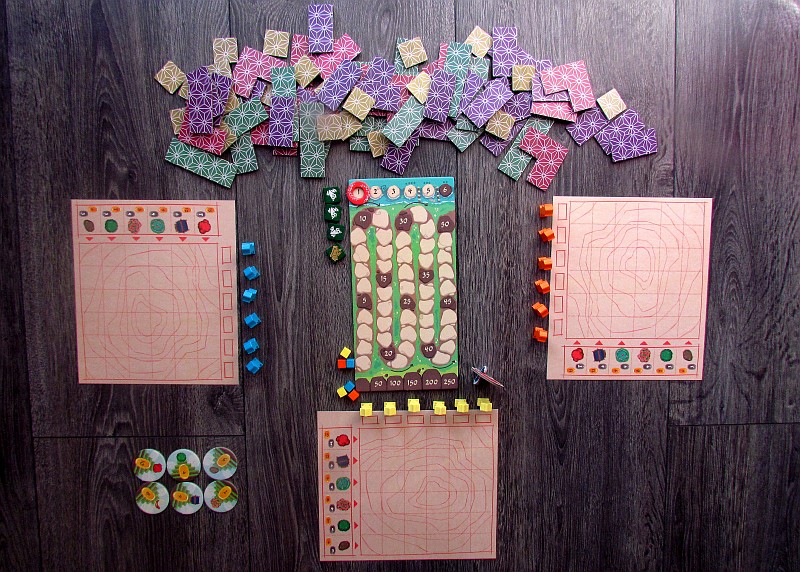 Scoring follows in every turn. The player gets as many points as is the number of objects on the placed tile times the level (upward), that the tile forms. This means, that new parts of the garden can be placed on top of each other, but only in later rounds, as all of these restrictions still apply.

All participants of the game gradually choose one piece from the menu after the other until the tiles run out or until one of the participants can not place another tile in their garden. At that moment the round is over. A new set of tiles is revealed, round pointer shifts and the game continues for the prescribed number of rounds. After playing the last one, players receive bonuses for items in each row to the points already earned. The one with the highest score wins.

Miayabi is a game about Japanese gardens, and its mechanism corresponds to it, because just like in this game, even in reality, the placement of elements is absolutely essential. But the topic is original, which corresponds to the processing. Here you have to appreciate the beautiful wooden lantern figurines, that stand out on the table. 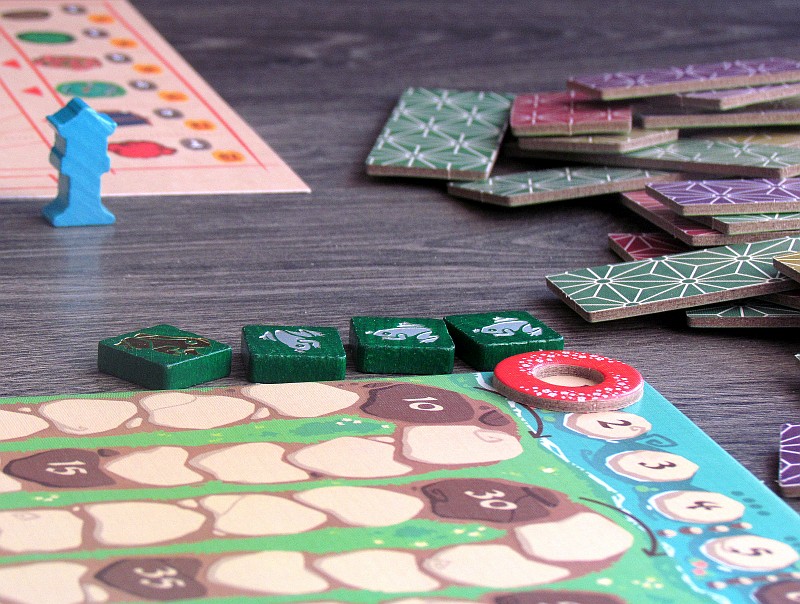 In this category he sets out to compete with other popular games. And it can withstand this comparison very well and can even match this other boxes. This clearly shows, that there will be something worth playing in Miyabi. Players are trying to build their gardens all the time, especially because it brings significantly more points in the game. These figures are multiplied with each other.

In addition to the base, there are also five small extensions in the box that beautifully extend the overall replayability. Of course, they are not obligatory and we recommend their use only after several games. Yet, you will appreciate them, because they change the game pleasantly, but maintain the complete spirit of the foundation. 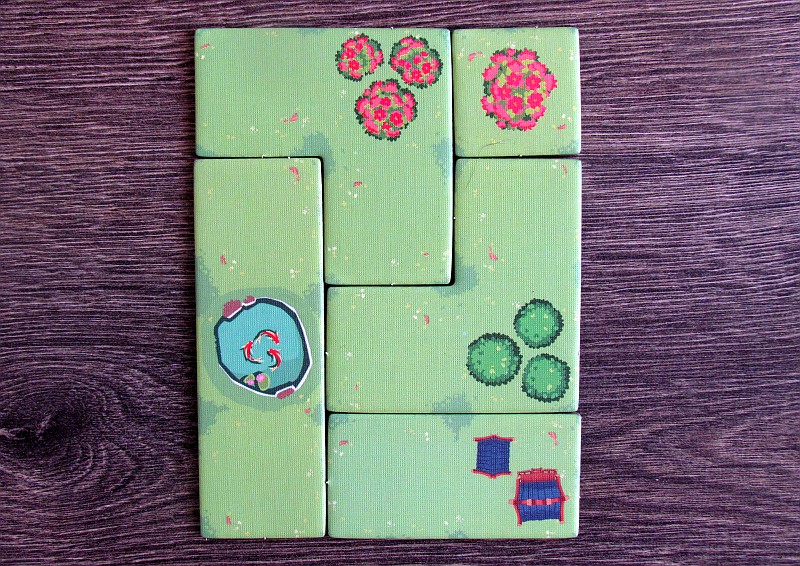 But you don’t feel free in the game. Each column can only be scored once per round, and you must always follow the rules for rows and their categories. This is connected with interesting strategic decisions.

The game is not easy at all, but playing is mainly as if you were trying to solve some puzzle and not so much about whether someone is sitting at the table with you. That is, until everyone needs to compare their point gains. Then you suddenly remember that there are other players in the game with you. 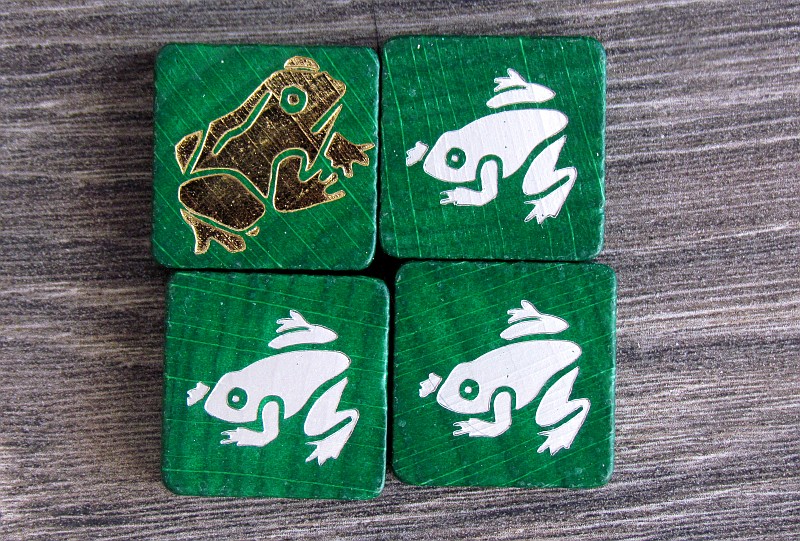 The game is great in two, but quite reminiscent of Patchwork and is fun. But it gets even better in higher numbers, when suddenly the struggles for superiority are more difficult. This is also the main reason why you want to monitor others. The end of the game can really make a glade in the current order, which is actually good. The game is not so predictable.

So Miyabi does everything precisely. And yet, if you already have a game of laying tiles, then you can see that it’s the same thing again. No, don’t expect something original. Miyabi puts quality and tuning in the first place, and the game thrives on the perfect and indisputable fun.

Miyabi is a Japanese garden game, that actually follows in the footsteps of other placement games. This time it is with significantly bigger placement restrictions, but all the more tactical scoring possibilities. The game is more controllable in two players, but whatever the number is, its still mainly solitaire entertainment with more neighbors at the table. But gameplay is good, although it does not bring anything to the genre. Originality may ultimately be the main reason, why Miyabi will not interest you, otherwise it is a really good game.