Review: Monster-Falle – monsters in a bag

by Dušan on 27. 08. 2014
0
previous article
Review: Kuck Ruck Zuck! - detective work at the zoo
next article
Preview: Scheffeln - trading in the twenties
Contents 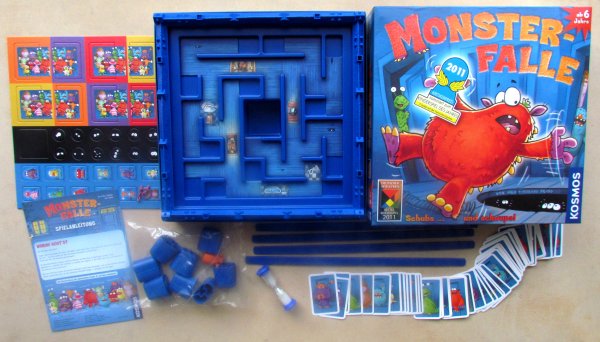 Those monsters again. They appeared in our house and started to haunt our grandmother. My children know, that there is nothing to worry about, because these furry creatures are funny and friendly. But grandmother does not trust them, so we have to carry them one by one away from the house. We were surprised, that creatures do not mind living outside. On the contrary, they alone suggested, that when it must be done, we’ll make it at least into a race. But house is full of long, narrow corridors, and only the fastest will succeed in bringing out most goggle-eyed friends.

Fortunately, those creatures like to share their favor. And when they are once expelled out of the house, they keep looking for new friends in the board game Monster-Falle. Authors of this game are Inka and Markus Brand, designers of excellent games La Boca (review) or Village (review in Czech). Graphics were prepared by famous Michael Menzel, all published under KOSMOS brand. And it’s history is written from year 2011.

We are welcomed by red monster on the cover, who in the spirit of the game’s title is falling somewhere into a pit. Children will push him there, when they successfully expell him out of the house. It is about time for us to follow it into the hole. When hideout is opened, it brings a surprise to all players. Dark blue plastic expands across the box, with frame keeping everything in its place. Four rods and oval caps serve as an accessory to this board. 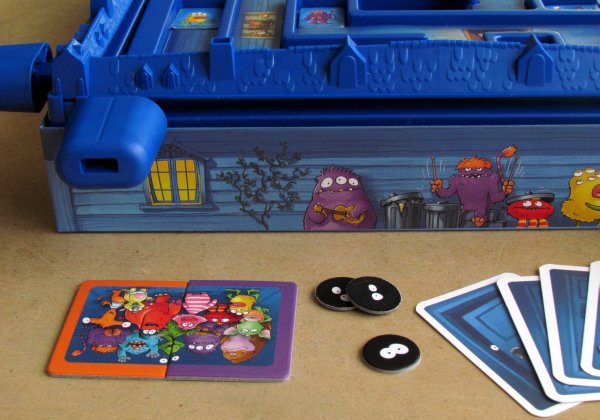 It all begins to look like a board game in the moment, when you notice sheet with small tokens in it. Some of them have drawn creatures. There is twelve of them together and each has a cute name, whether it’s Gustav Grübel, Bella Mozzarella or Udo Ukulele. Everyone seems like it could be fun to play with. But apart from these, players find in the sheet also round chips with eyes blinking in the dark. These will represent creatures, that had already been thrown into a dark pit.

Cartons hold four cards of cooperation, each made of puzzle pieces. Somewhere down in the pit we overlooked a small orange creature miniature caught in the bag. Players will be pushing it on the board. There is also an hourglass, deck of 72 monster cards and six other location sites. But we will not be interested in them in the beginning.

First, players prepare house out of the whole box, which is lined with plastic blue streets. In these alleys, there are several hollow empty places. Here comes a chance to place randomly shuffled monster pieces (tokens) there. Now monsters are spread around the house, waiting to be caught. They have a different position each game. All cards are shuffled, players create one drawing pile and put a monster miniature next to it. When connecting rods over the game board, older siblings or adults should help children. Players will divide eye tokens among themselves and hunt for monsters begins. 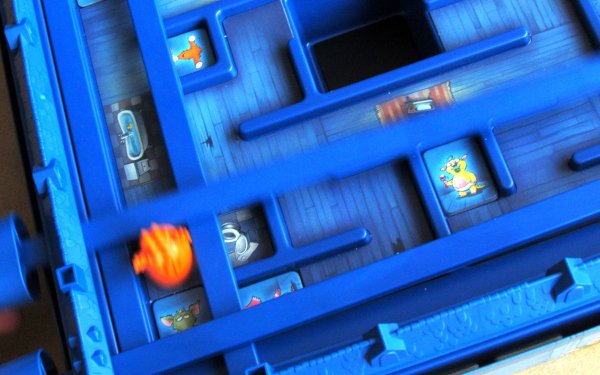 Once a player gets to his turn, he must try to catch as much creatures as possible in given time limit. Some of his opponents gives him start sign and turns the hourglass. That is moment, when player can look at the first card from the deck and find creature on the board. Boom! Player ran to the spot and seized the monster in the bag, but it is still far from victory!

Player must now place a miniature of creature in a bag on that spot, where creature is located. He must use rods to push it through corridors up to the pit in the center – into a room, that has two entrances. All four handles will be needed, each one for one movement direction. In the event, that monster tips over somewhere along the way, player must return back to the beginning and start his journey over. Card of caught monster is put on his plate cooperation. He can then immediately turn next card from the deck and continue the herd until sand in hours expires.

Before next player can act, finished hunter must first return stretched rods back to their original outside position. Only then can he give up floor to next player. At the end of each turn, player must throw one chip with eyes into the pit. When the pit is filled with twelve creatures, game ends. Players add the number of creatures accumulated during rounds and winner is declared best hunter. 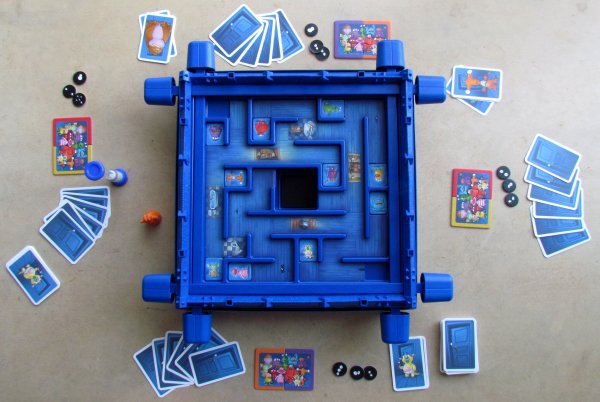 Monster-Falle is another game with creatures, after perfect Manno Monster (review). And you can tell, they come from the same company based on visuals. Again, anything wrong is almost impossible to find and from the first moment, you will understand, that this is primarily a children’s entertainment. And once again, it is a bit of a surprise, that it will entertain adults almost as well as children in the end. Fun with sliding pieces is really for everyone.

When one player manages all rods, it is sometimes very difficult to arrive quickly to destination. It takes a little luck in the draw of cards, but also ability to choose the correct path. From each point, there are several possible ways to get into the pit. After some time, players will learn these paths, and mistakes in planning will not happen again.

Fortunately, monsters are distributed differently each time, so everything is always a little different. However, if that were not enough, players can raise basic tempo and include add-on cards into combat. They add to monster also one room, which must be passed on their way to the pit. We can for example assume, that creature forgot its cell phone there. While this makes the game more challenging, players earn less points during their turn. But also word lucky gets more pronouncing, although this is counterbalanced by completing multiple cards per turn. 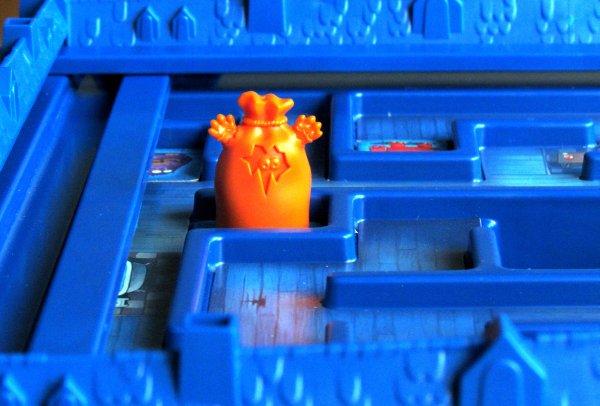 Monster-Falle is not only a game of skill, but also fast reactions and good planning. All that is necessary for victory in the correct serving as the game cleverly combines multiple capabilities. Great emphasis is on movement coordination, as players must use four rods and they (usually) have only two hands.

So all this applies to situation, when there are only two rivals in the match. With more opponents, the game changes and although we have already spoken many complimentary words, only now the real fun begins. Suddenly, two players must cooperate for success in each round. In order to clearly determine a winner, players have to alternate in teams with each other, just as in La Boca (review). This time, color cooperation tiles help to keep track, who already played with whom, because they have printed all the colors of players.

Previous paragraph also clearly outlines, how we will experience different numbers of players. Number of participants has great influence on the impression. While in duel, ability to focus and do rapid and precise movements is tested, wtih team games, everthing is about communication. Thanks to this, you will actually get two games in one box. The feeling is really so different. 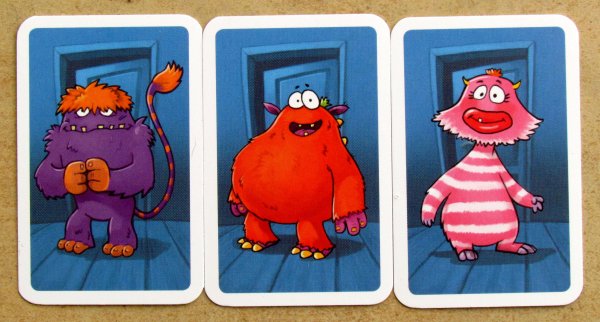 Game is fast, because players time is measured by hourglass. Yet with more rivals, time increases linearly, so waiting for next turn goes away quickly, because it does not take longer, than three minutes every time. The entire game is at its end within quarter of an hour without any problems, which is very important measure for a kids play.

Actual maze is not possible to change. It is a balanced disposition of corridors adjusted to give the most similar positions regardless of luck in the draw. But it is of course impossible in corner positions. Game is overall very colorful, cheerful and includes fun pictures. Plastics are firm, you have to be careful only with rods, when they are not connected to box.

We like Monster-Falle very much as children’s entertainment. Adults will love to play it with them and sometimes even take it with them on some visit to have fun with their grown up friends. Thus, a simple concept has evolved into guaranteed success with the audience. Best and most loyal audience are kids and they will be chasing monsters in Monster-Falle every day.

- nothing (little luck for children's games)