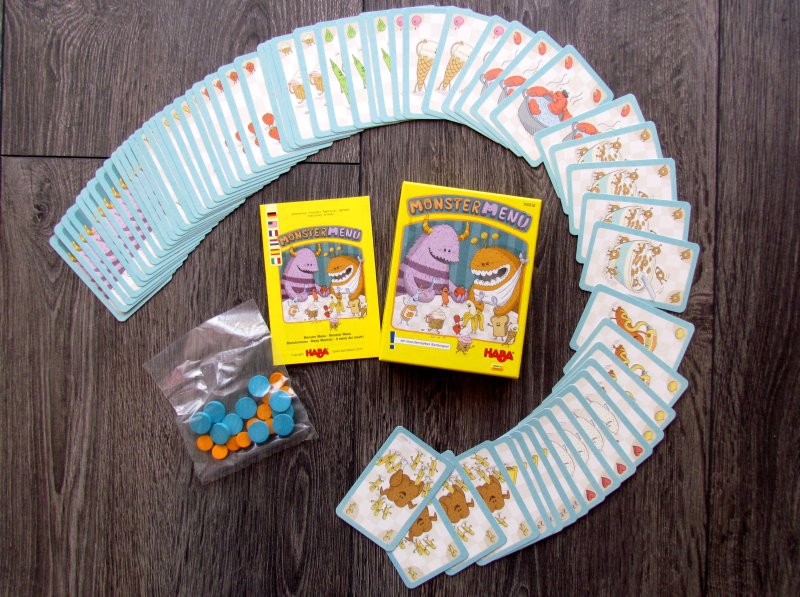 Now watch out! Never, under any circumstances, do not give different dishes to these creatures! Monsters must always eat the same, otherwise they could become dangerous. Some monsters are simply terribly spoiled. Classical food for the creatures sold in the stores is no longer enough. They need to crunch on specialties and not just any kind.

But if this threat did not intimidate you and you are still sitting in your chair, you will definitely like new card game Monster Menu, prepared for us by HABA. It was created by Benjamin Schwer and adorned with pictures by Sascha Morawetz. Game itself has a stamp of year 2015.

Game hides in a small yellow box, whose lid shows these two creatures watching food on the table carefully. It bustles, has tiny legs and certainly does not look like, that it would want to be eaten without a fight. Inside is waiting deck of sixty cards and two dozen tokens, each in different size. Most cards show food and again, only a dozen, contains images of the feast. 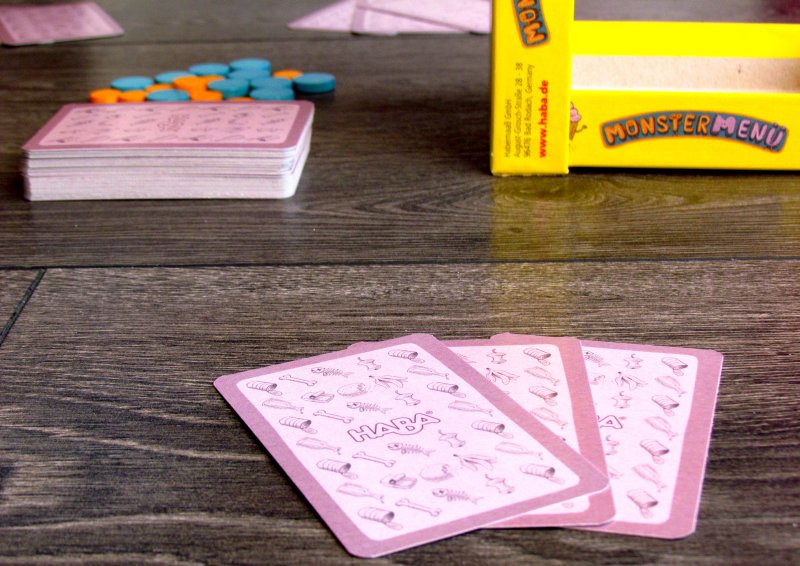 At the beginning, each player gets three cards from a shuffled deck. Remaining cards form a pile and are set aside as well as two groups of tokens. There must be enough space on the table for placement of two rows of cards and also for creation of a joint food / card offer.

Participant, who was elected as starting player, begins feeding by drawing three new cards to his hand. However, he gains them gradually and has to opt one of three actions for each card. But none of them may be chosen more than once in a round. Gradually, choice of player decreases until he is forced to perform an action, that had remained unused, with third drawn card.

Simplest option is to keep card for himself and add it into his hand. Or he may pass it (face down) to neighbor to the left. Third option is to reveal identity of the card to others and put it on the table in the joint offer. 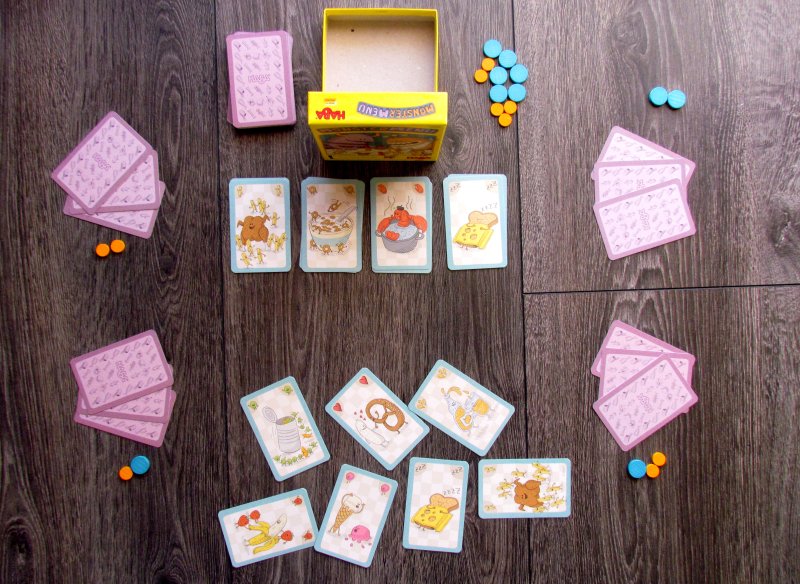 Only at the end of the round, when actions for cards are chosen, player can create pairs with same dishes and serve them to creatures. Each type of food may be eaten by monsters only once, because they are extremely spoiled.

Player can search for these pairs not only in his hands, but also combine them with common stock on the table. If it were to happen as a result of bad luck, that there is pair of cards on the table and creatures have not chewed on this type of food, active player must use it. All these attachments work in the same way, simply by putting them in the middle. But while in first two cases, players are rewarded in the form of a token (small or large), attaching two cards from common stock gives them nothing.

Game continues until creatures are fed. Players will easily know this moment, because they have to have all ten pairs of cards lying and eaten. Culinary and serving duel ends at that moment. Players add points for tokens and add bonus for each feast card, which they managed to keep in hand. Highest point total indicates player, who is the winner. 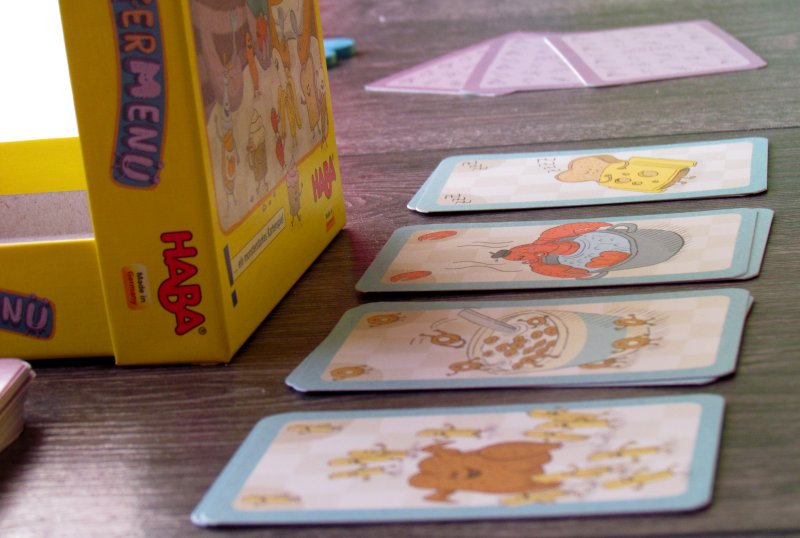 Monster Menu is a simple card game for young players. They do not need to know how to count, all they have to is look at images and know, how to combine them. And yet, it is possible to influence outcome of the game, although most things is decided by luck, for example when drawing from the pile of shuffled cards.

Taking chances is needed in virtually every round. With first card, it is actually clear. Player usually gets rid of it in the direction, where he sees benefits. So if it is a meal, which can no longer be fed, he probably hands it over to rival or exposes it. He should keep rather only those cards, that are worth and it is possible to get points for them.

Combining cards of food distributed on the table is then shared task. Who will be faster can receive at least one point. But the most valuable are sets, that player uses entirely from his hand. Those are then rewarded by a big token, which has a higher value. 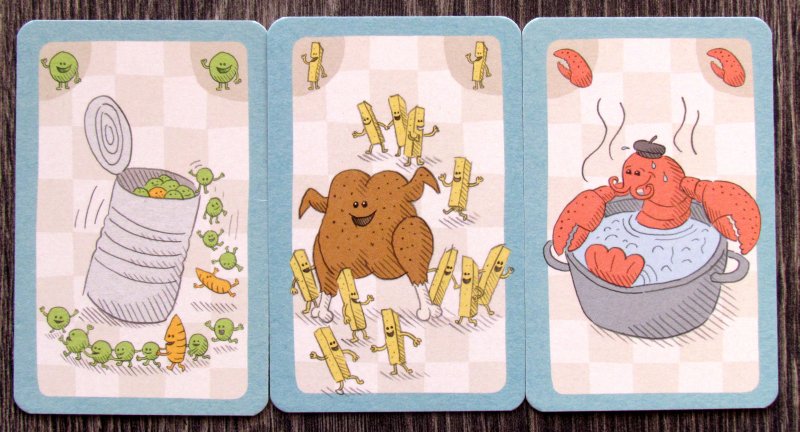 Game is designed already for six years old children and it really is true. Children can have great fun and this is main task of Monster Menu. Match is fast and often finished in just ten minutes. Game time is not very different even, when player numbers change, so it does not exceed fifteen minutes. This time we will not see any focus on improving children skills, while most of the game is random. And it definitely has nice, happy and playful illustrations.

Monster Menu is today’s delicacy, although it does not stand tall among children’s games. It’s great fun, but it has nothing to separate it from the crowd. Perhaps only processing. Kids will still grow to love it, and its certainly not a bad investment, if you’re looking for some relaxing way to be pig-nosed. In this case, Monster Menu accomplish exactly, what you are looking for.

- nothing extra new
- lots of randomness
- too simple for adults