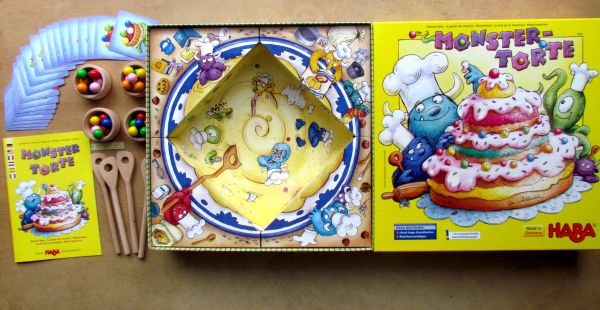 Cake is almost done. Just a few minutes and you will pull it from the oven. Frosting is beautifully fluid and everything is ready for decorating. But wait.. Where are the round ornaments? Colorful sweet smarties with special flavor? Now they should deliver unique appearance to this sweet dessert and also scent, that attracts all children. Monsters are not cooking cake for themselves. They prepare it for kids in an attempt to lure them into the kitchen. But do not worry, that they wanted to swallow them instead of that cake. They just want to be friends with them. Creatures finally found those disobedient ornaments. They have jumped in to bowl with glaze! There is no other solution, than to quickly fish them out.

Save the cake together now in game of Monstertorte (Monster Bake in English) from German company HABA, who won our attention many times by their previous games, such as Nacht der Magischen Schatten (review). Authors of the game coming from year 2012 are Stefanie Rohner and Christian Wolf and inside of a whole box was decorated with illustrations Felix Scheinberger.

This time, we again have huge dimensions of the box in front of us and it will serve already as a game board. You will find all those friendly creatures of various shapes and sizes on the cover hanging around the cake. They are wearing a cook hat and those little balls are already in the bowl. 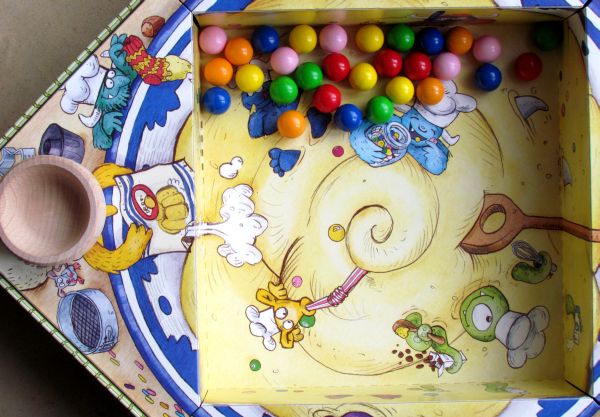 Once we raise the large lid, we will see a square bottom of the bowl. Around edges of the hole, there are rich illustrations of monsters. Inside the hole in the middle, you will find all the necessary components and ingredients. Four wooden bowls and spoons with one hole. On bottom of the box, there also rolls thirty balls in six different colors and they are accompanied also inseparably by twenty cards with pictures of different decorated cupcakes.

Cookbook is in this case replaced by rulebook with six different languages. Before the first game, you should also decorate anti-skim stickers, that are attached to the bottom of the box. You can then be sure, that while you fish for ingredients, the box will not walk out on you. This problem can be resolved also by using a tablecloth, which significantly limits the movement of the box.

Patches against the motion are really needed, because all cooking is unlike in reality insanely fast. In middle of the table, you put a box with all ingredients poured inside (balls). Each competitor gets one bowl, that he put on side of the box and also a wooden spoon. Players shuffle a deck of cards and place it next to the board. 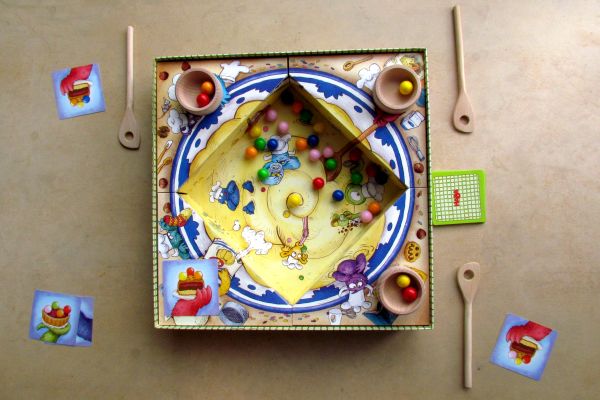 At the beginning of the round, you get one card with a cake you are supposed to make topping for, while everyone holds spoon tightly in his hand. Once everybody is ready, turn the recipe, so that everyone can see it. All cooks must now simultaneously fish balls out of the pot into his/her own bowl. During all of this, players can use only one hand.

Balls are very restless and gathering them is not easy. Fortunately, each spoon has a little hole in it, where ingredients can be finally caught. Only fastest of all gets a card just for himself. Game continues like this, until one of the opponents colects five cards. This cook becomes immediately the one and only winner.

Monstertorte is a very simple game, that focuses on skills of young children. Even the box recommends this fun from fifth year of age up and these youngest players enjoy cooking with the creatures the most. Although even you as older players will be intrigued with attempts to get balls out of the bowl. 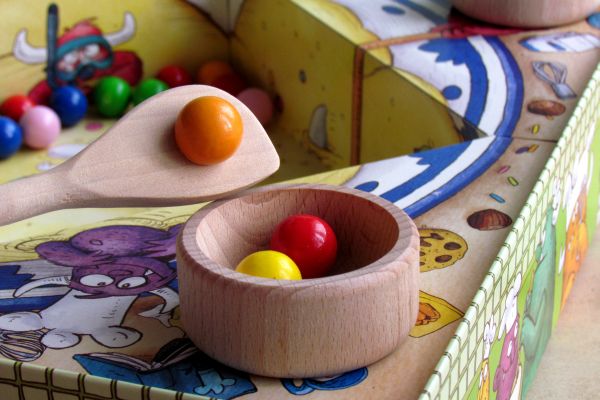 All players have the same starting position and are trying to catch the same ball colours. There is always enough of them for everyone inside the bowl, so you just have to be careful not to unnecessarily fight for some of them, when you get captured by the game atmosphere.

In addition, game offers not only fun, but also focus on teaching motor skills, hand-eye coordination and ability to quickly react. Dexterity is absolutely necessary in this game, because balls are not grabbed with spoon easily. It usually helps to drive it into a corner, where it can not escape. 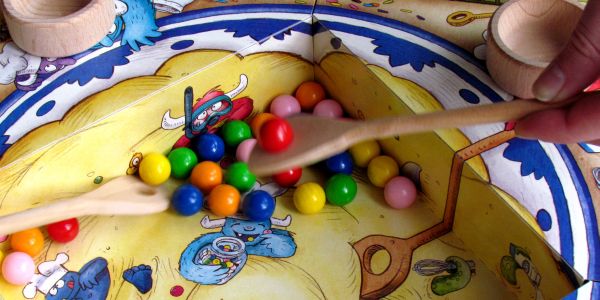 Game itself is very simple and well designed, main components are made of wood. In two players, its indeed good fun, but as rivals number grows, so does chaos and with it the atmosphere. With a maximum of four participants, Monstertorte is clearly the best experience. But as we have already mentioned, two children can also train very well and still have fun.

Rules think of a situation, where one of the players fishes out incorrect ball. In that moment, he must pour back entire contents of his bowl into the pot and start collecting again from scratch. But then, there is usually no chance of winning the round, because its really fast. Cakes vary in difficulty from one to five balls, so sometimes it really depends on the starting reaction. Some tasks are quite more difficult than others and that means, that scoring should maybe be based on number of toppings, not cards. 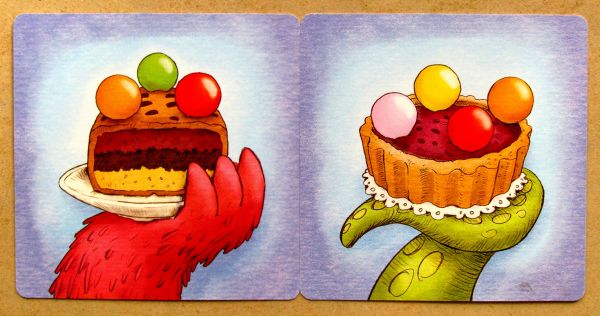 Monstertorte is a beautiful child’s play, which is an excellent match for the little ones. This is a special rivalry and catching balls, that does not require strategic thinking. Instead, children need good motor skills, that game very well trains too. Nothing prevents adults to become little cooks for a while too and have fun with the game along with their descendants.