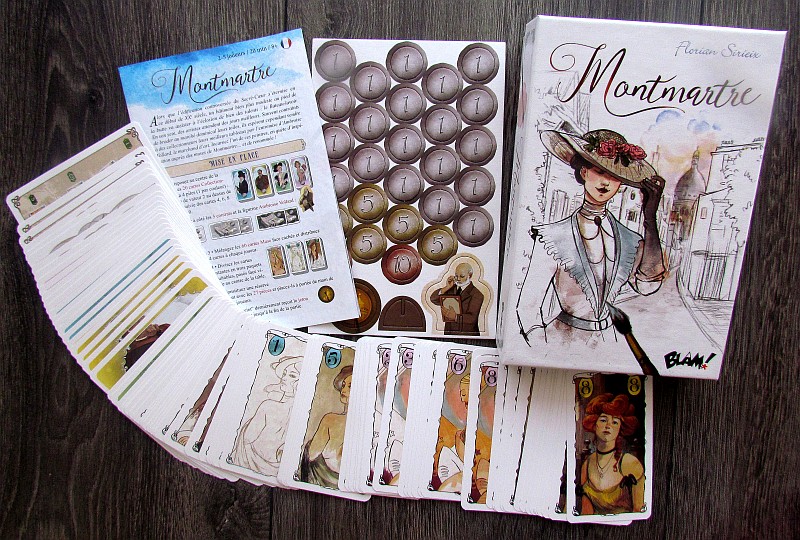 All beginnings are difficult. Every painter knows that. It doesn’t matter, how well can you draw. You can’t get rid of the feeling, that it’s still not good enough, people are grinning at you, and maybe every day, you have a moment, when you want to scrap the painting and never finish it. But then one customer is enough. His eyes light up, when he looks at the picture, and all your troubles go away.

The new board game Montmartre, created by designer Florian Siriexi, while Jeanne Landart, took care of the process of creating beautiful paintings to be sold. The whole game is then published by BLAM!

The lid of the small white box already indicates its artistic ambitions. At the beginning of the setup, players fish out twenty collector cards from the box, which they divide into four piles and arrange each in ascending order of value. Next to it there is room for a row of five contract cards, as well as a figure by Ambroise Vollard, an art dealer. The center of the table must also have space for a supply of coins. However, the central content is sixty muse cards, which, shuffled, create an offer in three similarly sized packages. Each participant will receive four of these inspiring womens for the beginning. 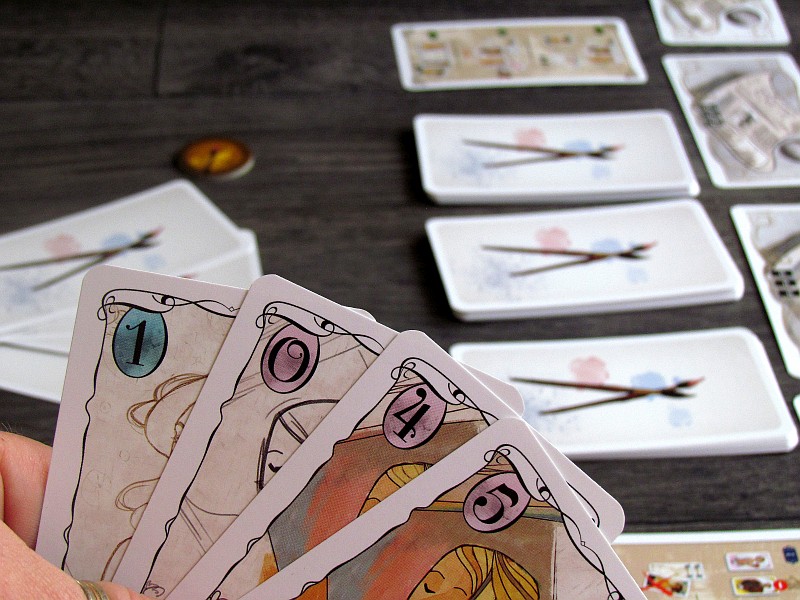 In his turn, the player has a choice of two variants. He can either work in his workshop and get a chance to get cards at the end of the turn, or he can sell them to one wealthy collector.

In the first option, the player gets a chance to paint first in his workshop: play one card or set of cards from his hand. In the case of a higher number, the sum of their values must be less than five. In addition, if an artist needs to get rid of an inappropriate painting, he can sell it for one franc at the market as part of this action. The last part of the turn in this variant is the chance to draw back to the number of four cards in your hand.

But then there is the second, more lucrative variant of how the whole turn can happen. The artist can choose one collector to sell to, but he must avoid the figure of Ambroise Vollard. However, individual people interested in buying art have each their favorite style and are only interested in paintings of the corresponding categories. At the same time, however, the player’s offer must be more interesting than the opponents – either he must have more images of a given type than any opponent, or their value must be higher. 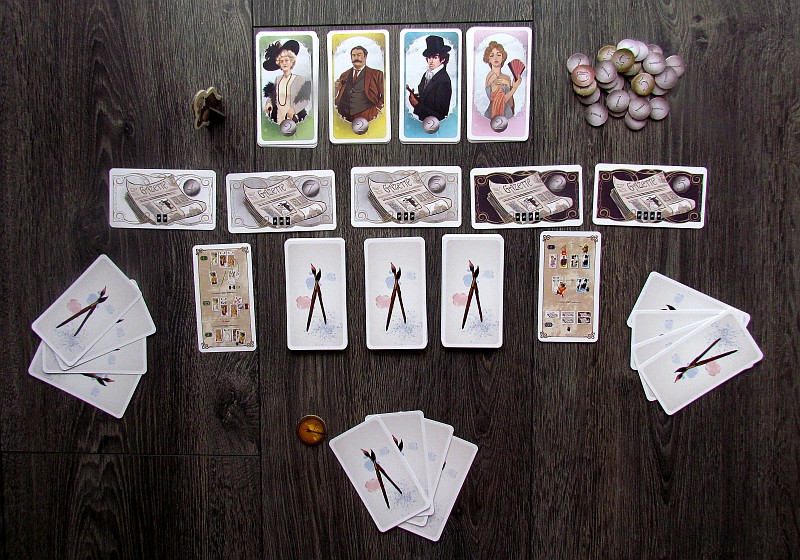 For his successful sale, the player receives a reward in the form of the opportunity to move Ambroise Vollard figure to another collector and thus block him for other opponents. Above all, he gets the top card from the collector’s deck and places it in front of him. Immediately afterwards, the player has the chance to commit an illustration for the newspaper once again per game and thus win a contract of interesting value.

As soon as half of the collectors’ piles are empty or one of the participants has accumulated more than fifteen francs in cash, then the game ends. The winner will only be determined by the sum of the francs in the coins together with the point values of the individual cards. He who has the top in the total becomes the winner.

Montmartre is another game, that tries to use a simple set collection system. It mainly takes an interesting theme, because we often do not have the honor of exploring art in a game. But players must first paint the pictures through their action and only then can they offer them, either to ordinary people for alms at the market or to true connoisseurs for ever-increasing amounts. 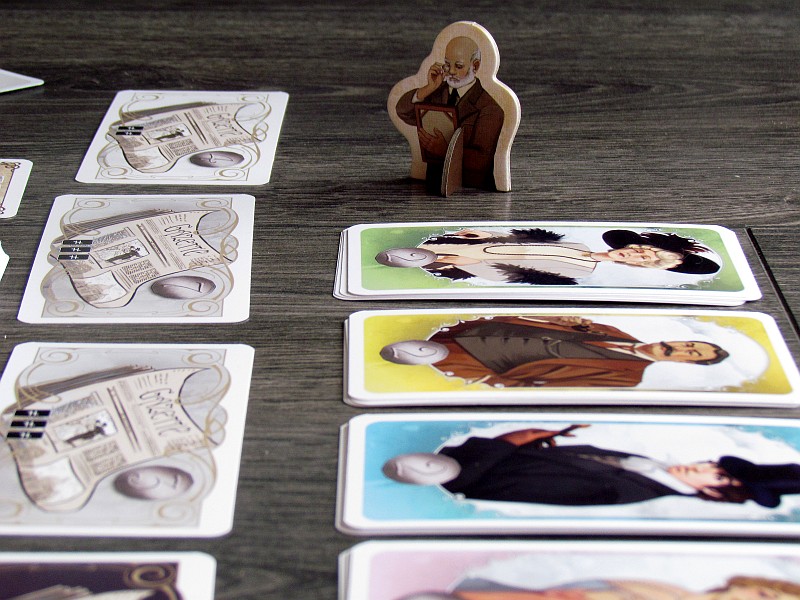 The development of the match is obvious here. The point gains gradually increase as players get to the cards, which are lower and have a significantly higher value. It is therefore good to keep a sufficient supply of images, that are not evaluated or rewarded individually. The artist sells the entire set and receives a one-time reward for it, and it is up to the player to evaluate the benefits of the current offer.

The game is simple enough, but at the same time it offers players solid control over the overall development. Even unwanted cards, that players receive by chance, can be disposed of relatively well. But it is always good to be able to work with them, although it is not easy, because the hand limit is set uncompromisingly at four. 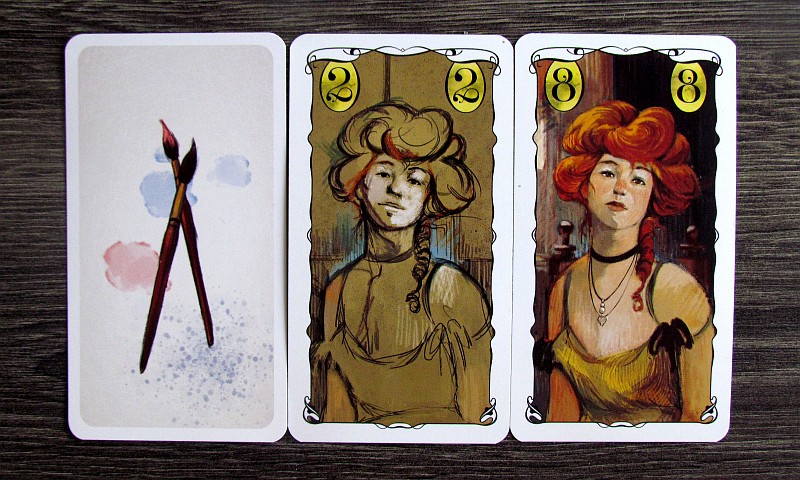 Easy rules are reflected in the speed, which easily fits into a half-hour time frame. And it corresponds to the content itself. But the game is not significantly unique except its theme, so the overall interest of the players will depend a lot on whether the story is close to them. The main positive is the fact that the number of players does not have a significant effect on the overall impression.

Nevertheless, players cannot play only on their own sand. They must also be strongly interested in what others are doing. This is because a successful sale can only occur if the player has a majority. And he can’t just take risks, he has to know exactly, when he can make them. Therefore, all information about the painted images is publicly available. And that’s why the ability to move the Ambroise Vollard dealer figure is such a powerful weapon that it will allow players to block opponents’ efforts. 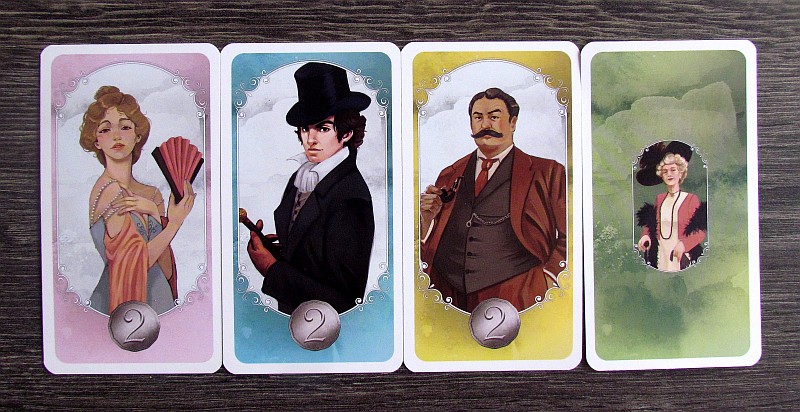 Montmartre is an elegant and nice card game that offers its view of the classic collection of sets. It gives him more conflicts, but also maintains a reasonable playing time to continue to fit into the category of fillers. The game does not bring anything new, but the graphics on the cards themselves differentiate it from the competition enough. But to really appreciate Montmartre and have fun with it, then you should at least have a lukewarm attitude to art.

Montmartre is a card game, in which individual participants become artists and create beautiful paintings. But even muses and abilities cannot ensure, that the painter has something to eat. He has to sell his works first, and that is the theme of this game. All participants compete for the favor of collectors, trying to drag them to buy their paintings and gain as much money and fame as possible. The game is fast, simple, but at the same time not very original. Nevertheless, Montmartre manages to play mainly on the string of beautiful workmanship and theme.

by Tomáš on 29. 01. 2018
Longtime wars about control of time space continuum threatens Lords of Time  source of immortality. To stop destruction of time itself, they created a [...]

Review: Celestia – a boat in the clouds

by Dušan on 03. 05. 2016
Not only at sea, but also through the air, some boats can sail. You just need to invent the right wing system, which gets you up and keeps you in the [...]
Comments
Leave a reply