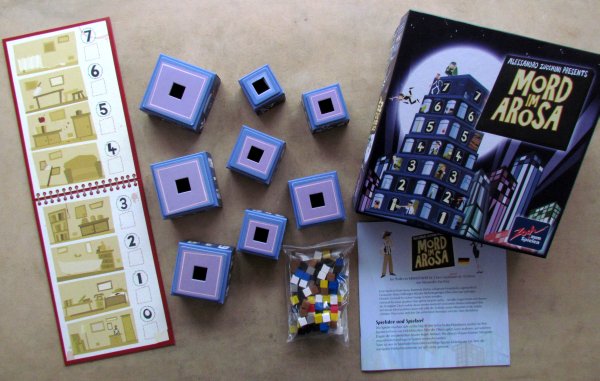 I was calmly asleep, when I was awakened by stomping from a dream. Someone ran in a big hurry around my room. According to the voices I heard, even in adjacent rooms noticed strange noises. My detective temperament just got a momentum.

When I walked into the hall, I met other guests discussing among themselves. I spoke with them and everyone has heard something different, but I made them to finally agree. At the beginning, there was a shot and then a scream. Meanwhile, manager of Arosa hotel opened the room and was horrified to find, that there was a murder commited. I can not afford to be suspected of this crime. I have to quickly clean up traces. There is no other choice, but to ingeniously alter a picture of what people heard..

Even the story of board game Mord im Arosa sounds interesting. It was designed by Alessandro Zucchini (we hope he did not experience such a thing in real life!) and then publisher Zoch Verlag in Germany. The game was released back in 2010, but only quietly crept under the radar of all players. Fortunately, we discovered it thanks to its Czech distributor, REXhry. Illustration were created by Oliver Richtberg and Tobias Schweiger. 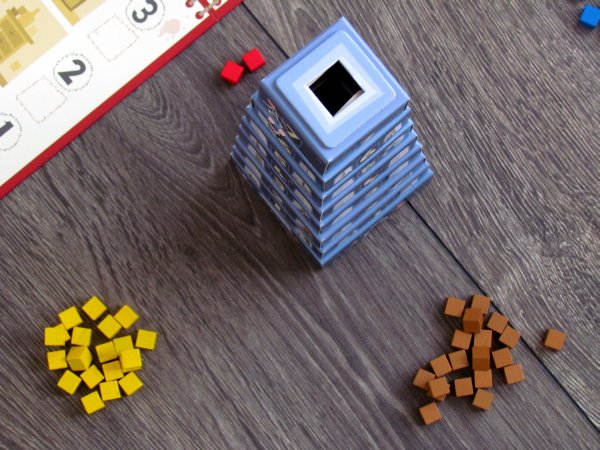 You will understand, why we are so happy to encounter this game right, when you open the box with a picture of the hotel enlightened by police lamps. Inside is a tall cardboard skyscraper, which acts as the entire hotel. It consists of eight trays, which are progressively shrinking. Each edge is numbered and has a square opening in its upper part, while bottom part is completely absent.

You will also one small folded board. Here are again those same eight floors, but with pictures of the interior of the hotel and area, where you will be placing cubes. There are also cubes, that can help police to find murder and criminal at the hotel and there is a total of 120 of them, coming in six different colors. And then there are two red cubes, that represent victims. Yes, there was more than one!

The beginning of the game is very fast and is done by simply assembling the hotel. Next to it is then placed notebook (the aforementioned game board with a hotel map). Each player chooses a color and takes its twenty cubes into his property. The remaining two red victims are then thrown into the hotel through upper hole by one of the players. But before he does it, all should listen carefully. Their ears are the most important detective tool, that will this time be available. 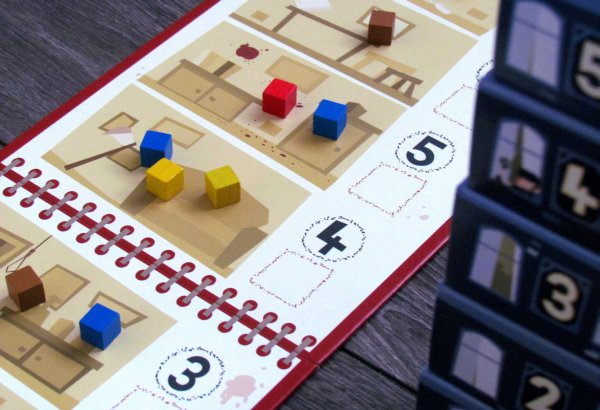 Game then begins with its first part, which is the search for victims. Each player´s turn becomes an attempt of investigators. Player can choose one floor to explore and check for the presence of clues (player cubes) or victims (red cubes). He should pay attention, when lifting upper floors (with both hands, so no cubes fall). Everyone can see, if there are any cubes lying around the opening for the stairs to lower levels.

But detective will often seek on the wrong floor. The walls are thin in the hotel and no one knows, where exactly scream came from. Therefore, if player does not find any red cubes, he is ordered to throw one of his clues into the hotel instead. In addition, if there are any colorful clues lying on the revealed floor, they must be taken a thrown back through top opening of the hotel along with his own cube. This is done even, when a victim is found.

It does not take long, for one of the detectives to succeed. When victim in the form of red cubes is revealed, it is immediately moved to the corresponding floor on the investigator notebook. And then second phase is getting near, because it occurs at the moment, when players find both victims. This determines, which floors were scenes of the crime. 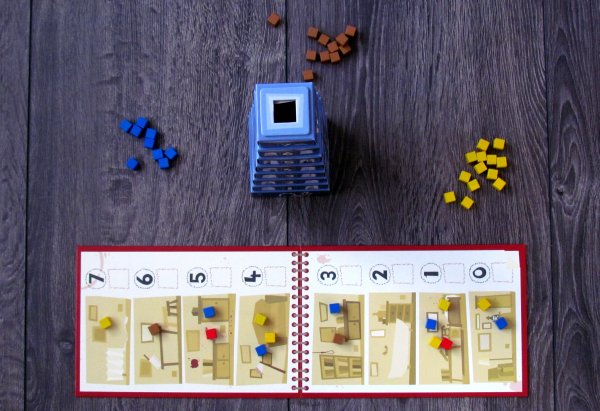 It´s time to cover own tracks, but also to suspect other players from being the criminal. Each of the detectives has choice from these two actions, when his turn comes. Simpler one is to cover tracks. Player again reveals one of the floors. But he is trying to find those, he thinks contain one of his incriminating materials, ie cubes in his own color. For each cube in his color, he may remove one cube from hotel map from the same floor. But how do they get there? You will learn it in a while. First, player has to throw all found cubes back into the tower.

Similarly flows also accusation of other hotel visitors, who are sitting at the table with the player. He simply selects one floor of the hotel and says names of those players, he thinks have their tracks on this floor. If he´s right, each such convicted sinner must move one cube from his stock to the hotel map – to this corresponding floor. So you do not want to have your cubes on crime scene! All cubes are then thrown back into the tower once again, with all players listening carefully.

In both cases, player can also fail and not find any required color cube. In such a situation, he must rather take one of his own cubes and toss it into the hotel tower. This increases the chance, that his traces will be revealed in inproper places. 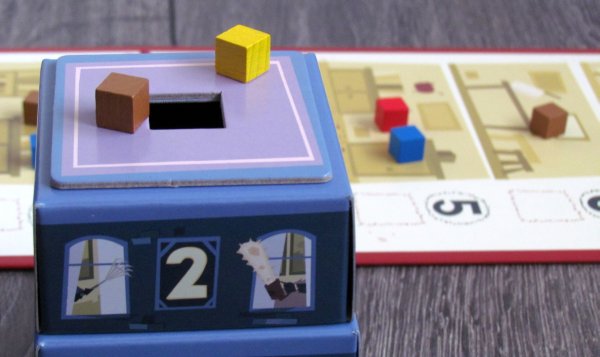 Match ends, when one player runs out of cubes in his stock. This may be due to the fact, that he has them inside the tower, but they can also be located on the map. But now, all it remains is to determine, who the police arrest, based on all the evidence acquired in notebook. Players will receive three penalty points for each track, which is located on the floor, where a crime happened. Footprints on the floors adjacent to the crime scene are counted as two penalty points and all other cubes on hotel map are worth one point. The player with the most points is the criminal, but winner is the one, who has the least points.

Mord im Arosa offers a unique combination of auditory game with tactics. Each cube, that is thrown into the hotel tower makes noises until it stops. Players must really pay maximum attention and listen closely, even during turns of others.

This mechanism brings with it only one major flaw. There must be absolute silence around players for you to hear rattle of cubes. Therefore, you can not play it anywhere you like, like in a coffee shop or playroom, but its best in a quiet environment, perhaps at home. Thanks to true emphasis on absolute silence and murderous theme, game has an interesting and thrilling atmosphere, when you play it with the right group. 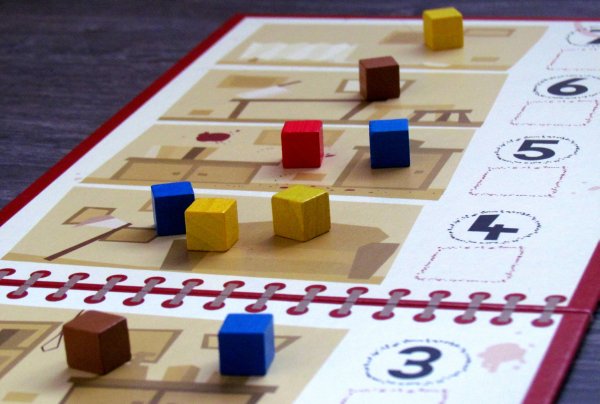 Silent mood but does not suit or feels comfortable to everyone. It is perhaps only complaint, that can we have to otherwise very clever mechanism. The game is surprisingly tactical, because all the cubes keep coming back and back again into a skyscraper.

Smart was to divide the game into two parts. Thus, players can prepare their positions well in first and then beat others. And do not let the first impression fool you, there really is not luck involved in this by any means! By watching others and good listening, you can really work your way towards victory.

Processing of the game is excellent. The capture pads on each floor are exaclty as big to hold only a few cubes. Skyscraper is already completed, when you get the game, so you do not have to be afraid of putting it together badly or being unstable. Rules are then easy to understand, with examples and all the stuff. 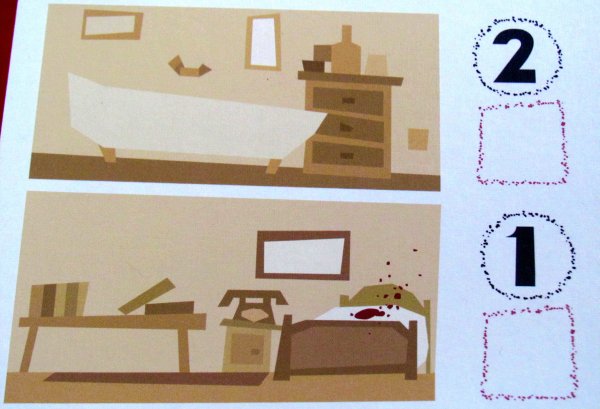 Mord im Arosa is a unique game, there is no doubt in that. We absolutely loved it and if you like mysteries and solving murders, then it will take you to the maximum as well. But beware, if you have to be loud, when playing! This game will not be for you! But other than that, Mord im Arosa offers a suspenseful playful plot from beginning to end.

- emphasis on quietness restricts the environment, in which you can play and also player´s nature

Mord im Arosa puts you in the role of a suspect. There was a murder, but only traces of the true criminal are hidden in testimonies of witnesses, who heard something. There are many stories and clues, and it is not easy to find the right ones. Police will have to trust their instincts and tracks on crime scene. This is why you need to destroy, those are pointing to you and set up those, which found others guilty. Save yourself and cast it on someone else! It´s easy, just listen well, where cubes are falling. Players are gradually revealing hotel floors, finding cubes and dropping them back to the skyscraper. You do not want to get caught at the scene! The game has a great idea and atmosphere, but requires complete silence at the table, which can be a problem for some players or gaming environments. Mord im Arosa is a unique game, that can provide really enormous fun with the right people.