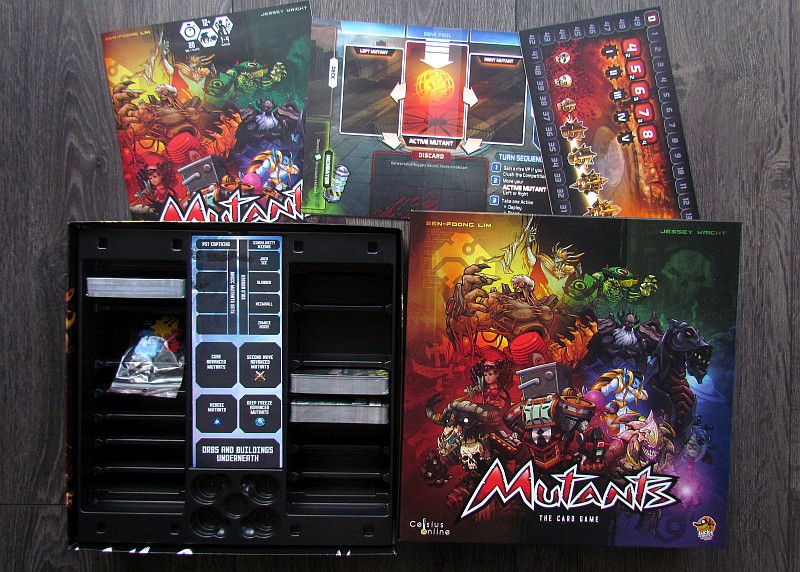 No ropes are needed. This arena is pretty contact and already closed off. Viewers watch from the safety of their homes, as battles are transmitted from every conceivable angle with the help of holographic sensors. These then create the illusion, that the warriors are fighting right at your home. So it’s time to guess, which of the mutants will be the winner?

Creating such an invincible mutant is not easy. You have to be an expert in genetics, and that’s exactly what players will become in the new Mutants: The Card Game, published by Lucky Duck Games. The origin of the game is signed by a pair of designers Sen-Foong Lim and Jessey Wright. And the game has already secured success in advance with an excellent campaign on Kickstarter.

On the lid we see a mutant blossom of characters and inside the player find a game board, which mainly offers different scales. Players place this board in the middle of the table and occupy it with a move counter. The rest of the scales will be used by players, who must first prepare their equipment: their board, the starting dozen cards of mutant genes and, depending on the color of the board, place the selected indicators on the scales of score and strength. 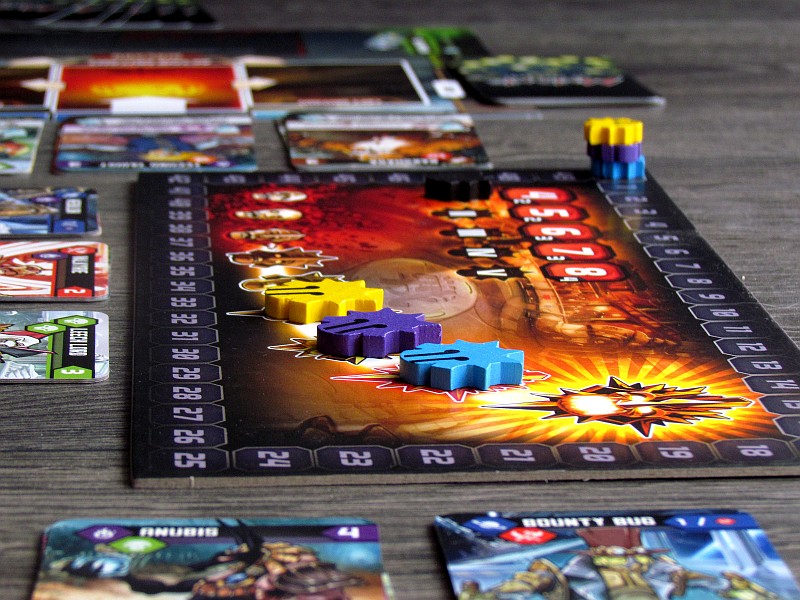 However, the individual participants will start the game mainly with a unique source of genes (gene pool), which they will gradually analyze by draft (they will choose one card from the menu and give the rest to a neighbor), so that each player has six mutant cards at the end. All these have their second card hidden somewhere, which players take and make three piles of four out of twelve mutants. Turn over the top card.

Players start the round with six cards in hand. And just as many turns will have one round, before everyone plays a complete set of their mutants on the table. They gradually march forward, facing towards the ring. Their board consists of three card slots, with each newly selected mutant always throwing himself into the middle position. The card can be selected either directly from the hand or breeded by discarding two cards and collecting a new card from player’s private offer. But in order to get a new genetic combination, the icons on the discarded cards must match the newly recruited mutant requirements. The third option is to use an inkubátor, that costs only one card and the player can prepare a card from his genetic stack, which moves up his own draw pile at the end of the turn. 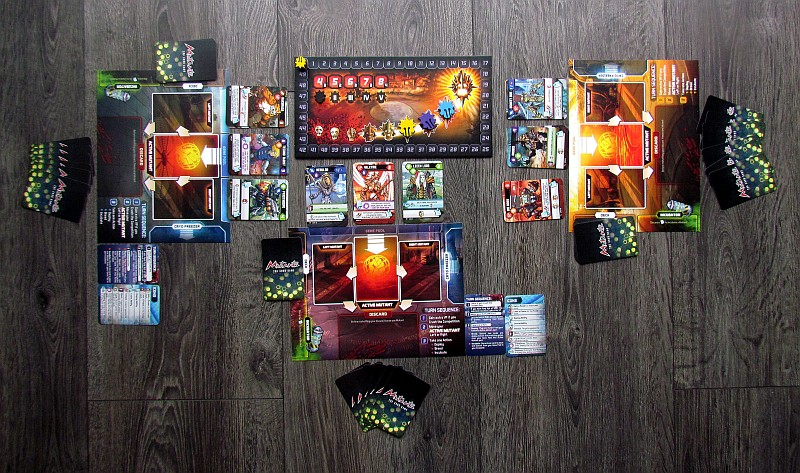 In the upcoming turn, player can choose, whether the central mutant moves left or right on his game board, because he will immediately need a free space – creature will be replaced by a new one played. This will sooner or later replace all the mutants with new ones, and the game will constantly move forward.

Individual characters bring benefits and profits to their owner. Cards offer two moments, when these abilities are activated. It may be a moment, when the player plays them, but it can also be a situation, when creature leaves the battlefield. To do something special, the card contains two silver lines with a number of icons and texts. As a result, mutants can bring players a gain and loss of strength on the power scale, but also the ability to attack opponents or defend against attacks. Other skills last as long as the card is revealed.

When all participants run out of cards, a scoring occurs based on the scale of strength and its order. Players get new cards and the game continues with a new round until the fifth round is played. At that point, players will add points for set aside (frozen due to ability) mutants and compare the resulting scores. The player with the highest profit becomes the winner. 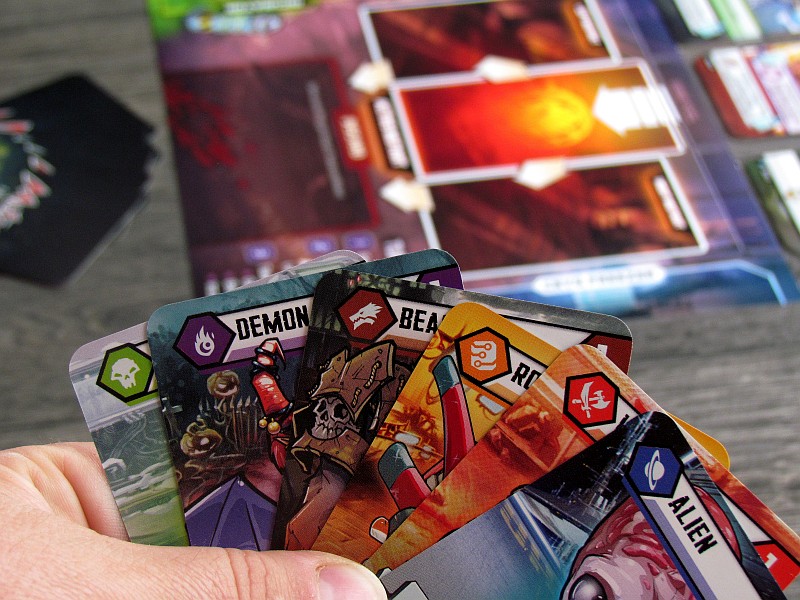 Mutants: The Card Game is an interesting purely card game, in which a really interesting mutants and creatures, that you have never seen before, breaks each other face. The main novelty, however, is the manipulation of the cards of the mutants, who run into the center of the ring and then leave it towards the sides. However, the player is in control at all times, which card he wants to discards and which he still wants to keep for its ability. It is the timing of the skills of individual cards that is the main moment where you can influence the overall development.

At the same time, the game offers a rather interesting set of strategies with which you can decide to proceed to scoring success. In general, there are not many points to give away, so you will learn to appreciate even the seeming point crumbs. 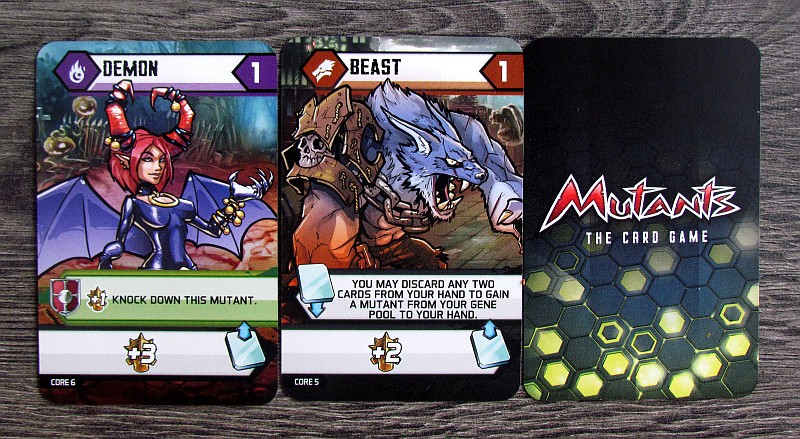 At the beginning of the game, there is a draft by which the players determine the composition of their mutants. As a result, the games are significantly different and you will always have different cards available. Of course, this is also due to the variability of the fighters themselves.

The game is best in higher numbers, ie in three and four players. It’s fun in two, but with a higher number, the number of conflicts and fights increases, thanks to which the position on the scale of power is constantly spilling over here and there. In doing so, one game moves for a reasonable sixty minutes, after which the winner emerges from the battlefield.

Building a package is really great. You don’t spend any money, but instead you need to discard cards that match in icons. This really encourages the overall impression of the atmosphere, but you sacrifice such cards without bringing you anything else. And nobody often wants to do that. So it is not easy to balance when and what cards to buy. In balance, even all players start the first round with the same set of cards, which is something completely different from classic deckbuilding. 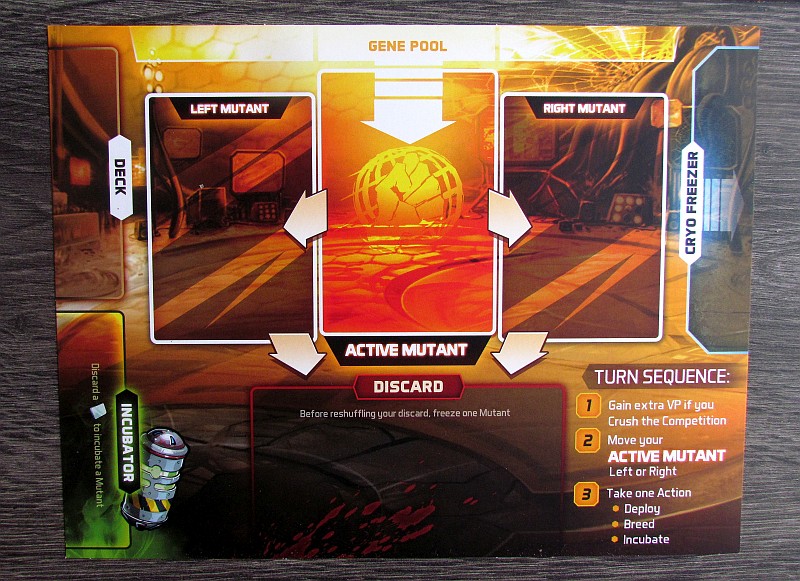 There is nothing complicated about the game in terms of rules. All you need to do is read the texts on the cards to fully enjoy the possibilities and combinations of individual cards. For beginners, there are even starting sets of cards that are more suitable for learning the mechanisms.

The cards have excellent color graphics, which fit perfectly with the comic book focus of the whole box. The rules are clear and the components good, although the player boards are really only made of hard paper. The box is well organized and has compartments that you can even hide with a plastic cover. This is because it is necessary to take into account the expansions, which further pack new possibilities. 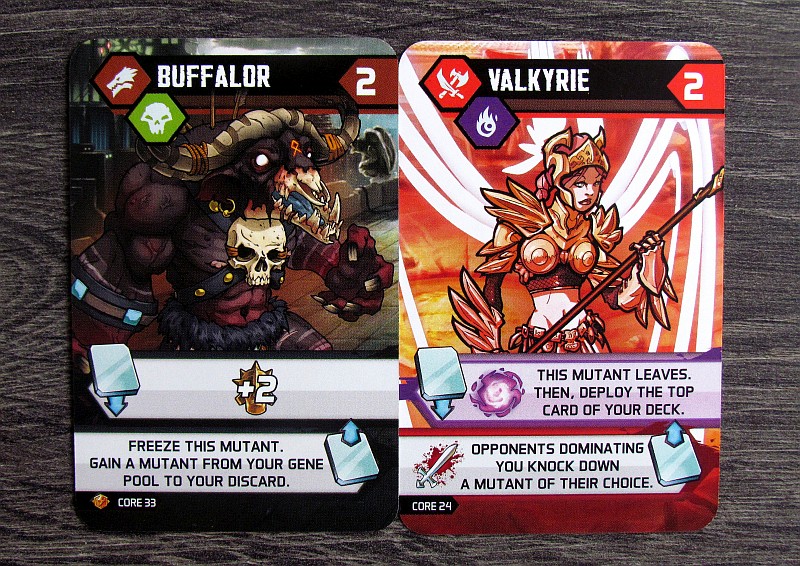 Mutants: Card Game is an interesting mix of genres. In fact, it is still deckbuilding, but it doesn’t work the way you know it from other games. Above all, it builds on the principle of playing cards, which bring the player abilities, but they also constantly scatter to the sides and disappear. This is because a player can only have a significantly limited set of mutants active in the ring. Overall, Mutants: Card Game is very dynamic, exciting and full of possibilities.

Mutants: The Card Game is a game, that invites several mutants from all warring parties to the ring. But new ones are still being thrown into the arena during the match, so the original ones have to step back and make room for their comrades. This creates a very interesting constant development and flow in the game, with which players must be able to work and time their cards appropriately. The game is unpretentious in terms of rules, but offers enough options and effects to work deeply. Mutants: The Card Game is a very interesting game and a really original feat, which is worth a try if you like card games.

by Dušan on 12. 11. 2018
The world has changed. Despite countless protests and struggles, mutants now live among us. Still, there are places where they should not step in their own [...]
Comments
Leave a reply