Review: Mystery Rummy Jack the Ripper – who will catch a legend? 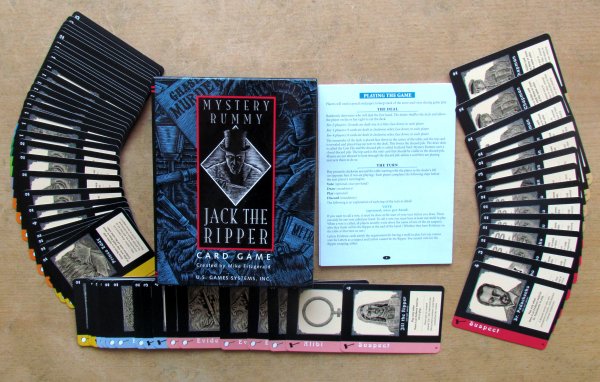 Corners and narrow streets of London are no longer safe. Yesterday, I learned a lesson about this on my own. I was returning home from inn to my family, when a lifeless body fell at me in the alley. It was a woman, her throat was slit and dead eyes stared at me blankly. Fright covered my whole body and I was unable to move for a while. I looked around and my senses tol dme, nobody else was there.

But that were not any assurance, that I was safe. In the shadows of the burned up lanterns an entire British army could be hiding. I realized, that I am still holding a dead woman in my arms. It was once a beautiful blond, whose curls gently stroked me on my hands. With the greatest reluctance I slowly let her down. It does not make sense to call for police, because they visit only very rarely such abandoned places. And I was no witness to help them solve this crime, but one thing I was sure of, when I arrived home: No one in London should feel safe anymore. No one..

You are invited to London to a year 1888. Come with us to the Whitechapel district, battered by a mysterious killer, whose identity is known to nobody but himself. And revealing him will be your task appointed to you by the game Mystery Rummy: Jack the Ripper, which started in 1998 a flood of Mystery Rummy games published by U.S. Games Systems, Inc. Our version is from 2009 and is thus a reprint, which is decorated with illustrations Christine Conrad and Virginijus Poshkus. 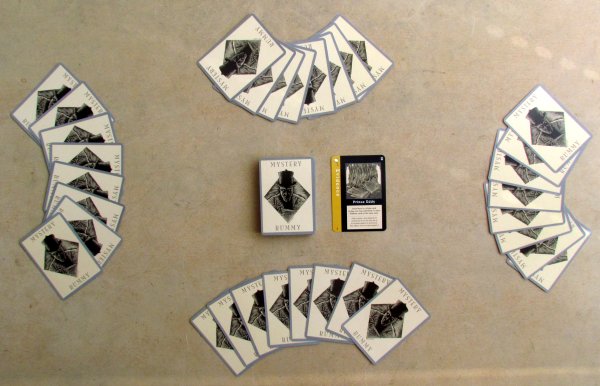 It immediately became one of company’s greatest achievements, as well as the life’s best work of author Mike Fitzgerald. It was expanded later on topics of Jekyll& Hyde, Al Capone, and most recently also Bonnie and Clyde, but this was directed by another publisher. Designer of Mystery Rummy managed to escape from the shadow of rummy games, thanks to military game Hooyah: Navy Seals Card Game (review).

As a good card game should, also Mystery Rummy: Jack The Ripper is located in a smaller box. Totally in the mood topic, you find a dark shaded drawing on the packaging, that revolves around the murder weapons, scalpels, but portrait of the main suspect dominates it all from the middle.The whole box continues to interest us with its processing style, because it looks like a little book. It opens by leaning the lid away, but the lid in the closed stat overlaps also the bottom of the box.

When you try to look inside, you will find six images of suspects on the inside of the lid. These are all important figures in their historical portraits. More important spectacle awaits you on the other side of the box. It is divided into two compartments filled to the brim with cards. But you do not have to worry about pulling them out, because there are a canvas tongues slid under each of them. When you pull it up, the snake does not bite you, but instead half of game cards jumps out. And on the other side, you can do the same with the other half, so finally you have 62 cards. 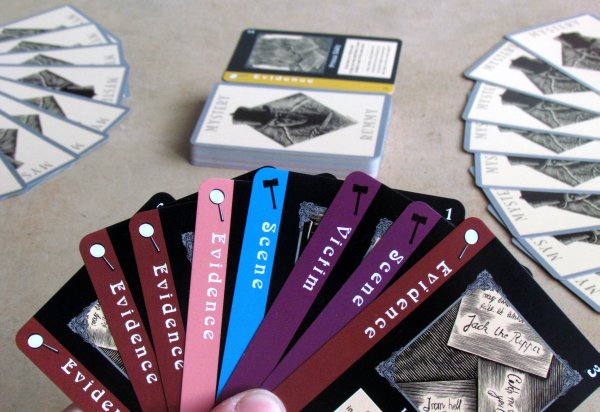 In the pile, three kinds of cards are waiting for you – one card marks successful escape of Jack the Ripper, but there are also 36 cards of evidence and 25 gavel cards. All have the same layout and differ mainly in icons to the left. On the same side, there is also a color bar located.

Colors and texts can be not only evidence, but also suspects, victims, crime scenes or official events. In the upper right corner is a card point value, while the number at the bottom shows the probability, that the character is that murderer, you seek. Number one is the highest chance here, while six being the lowest.

All of them without distinction have a picture, name and two texts separated by a horizontal line. Upper describes the ability (a card effect), while the bottom gives us a little background from the real investigation of the case.

The game is essentially based on the classic game of Rummy, that represents a collection of similar numbers. For such games, we have had the opportunity to test Rummikub. Its difficult for you to imagine such a merge? I’m not surprised. The game combines mechanisms simultaneously with the search for the killer and the possibility of his escape into a coherent whole.

Besides the playing cards, you will also need a pencil and paper for notes and counting points. According to number of players in the match, you then deal between eight and ten cards to each of them. These cards represent their starting hand and the rest of the card create a drawing deck. Top card then creates a discard pile, when you rotate it and make it a first card played without any effect.

Each player has four parts of his regular turn, two of them are mandatory and two optional. Only then, he passes the word to next opponent, who has the same chance with his cards. Initially, you must first draw one card. It depends on the player, whether he takes it from drawing or discard pile, but he has to always pick up the top one. While in the discard pile, you know for which card you are reaching, with the second option you go completely blind. 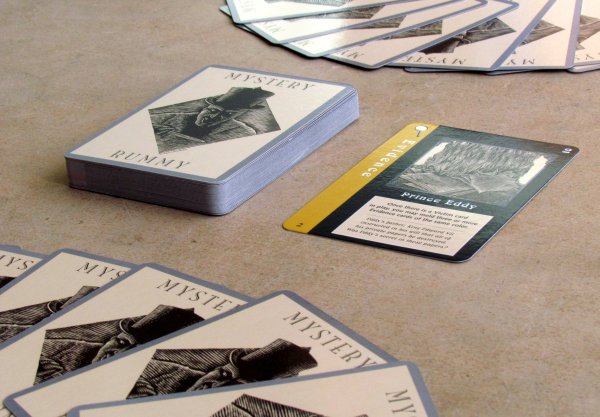 And now you finally can start playing cards. You can play one gavel card and any number of evidence. But you must play at least three of one color or attach them to a group of the same name, that is already on the table. At the end of each turn, you must discard one of the cards from your hand to discard pile. It can be picked up by next player from there, if he wants.

But we skipped the main option. At the beginning of his turn, a player may call for a vote, but that can only be done once per game. At this point, all players secretly write down name of character, which they think will be convicted as murdered at the end of the current round. Customers can choose any one of six different available characters. Voting is secret and revealed only at the end.

Thus, players take turns in playing the cards until the moment, when one of them plays the last card in his hand and is left with nothing. This is the classic and most obvious conclusion of round. It is important to count the points at stake for each of the suspects. A player can finish the round, but also by playing card called Ripper escapes. In both endings, the only points are awarded for this card (35) and for the cards of victims and crime scenes. Other cards have no value!

Character with the largest sum of cards becomes Ripper for this round. Now, players add up value on their cards, and any card belonging killer will get double points. At the same time, you get also deducted points for cards in hand, which can not be right now attached anywhere on the table. The player who correctly guessed the identity of the killer gets ten points. Game proceeds to the next round until one of the players reaches sum of one hundred points.

Mystery Rummy: Jack the Ripper is surprisingly simple game. And especially in comparison with the length of the rules. They can easily discourage many players discourage, even though this is essentially a simple fun of collecting groups of cards.

So where lies ground for all the popularity of the game and its really addictive gameplay? In attempts to get your character right there on top and let him become Jack the Ripper. This is the main goal, and the path to the largest profit, because these cards have double value at the end of the round. 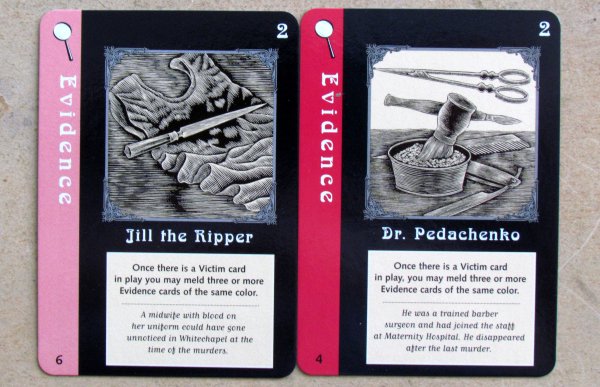 The game contains a lot different cards, for which you can get points. But it is always first and foremost important, to get them on the table in front of you. Or you can help one of your rivals and extend a group of the same kind. It is very important to estimate and track opponents doing and try to anticipate, which card they might need. You certainly would not want to throw away such card and simultaneously you want to use their discarded cards in your favor.

But the extraordinary cards in Mystery Rummy are primarily victims, alibi and crime scenes, that allow you to perform special actions – picking a card from the discard pile or drawing two cards. Alibi serves one of the characters on the table to avoid accusations – this character can not be a murderer this turn. But alibi are rare and can be dedicated only to one of the suspects. Important are also jokers, which can be combined with any card. But with which will it be the best choice?

Two possible endings of a round ensure tension. You will find a gray card in the package, helping ripper in achieving his goals. It’s not easy and it is a risky venture (minus two points for each suspect in the game, if you do not succeed), as this card has its own conditions for returning.

Each card has its important place and the game is surprisingly strategic and will reward players, who plan well ahead. Although you still can not quite perfectly affect the cards, you draw, but you certainly feel some control over this exciting game. Card counting has its irreplaceable spot in this game and there is increased probability, that some of the cards come as they are not in discard pile.

You can play a game with gusto in two, three or four players. Duel is different from the other counts regarding its gameplay, but both versions of the game are interesting. In two players you have a better overview of the match and are in particular control of the game, while more opponents brings more unpredictable situations. Regardless of the number of opponents, you can always appreciate the pace ensuring, that you get very quickly to finish line.

Mystery Rummy sounds essentially regular, when on paper. The more can then the game surprise, when you learn it and try it for yourself. You will not feel, that luck gets in the way and you can make up for it by choosing the right card. Each round is exciting and the whole situation could change with a single card. Let yourself be surprised and see, who was the real Jack the Ripper!