by Dušan on 15. 12. 2014
0
previous article
Review: Camel Up - humpbacked sprinters run through dust to the finish line
next article
Review: Boss Monster - luring heroes in
Contents 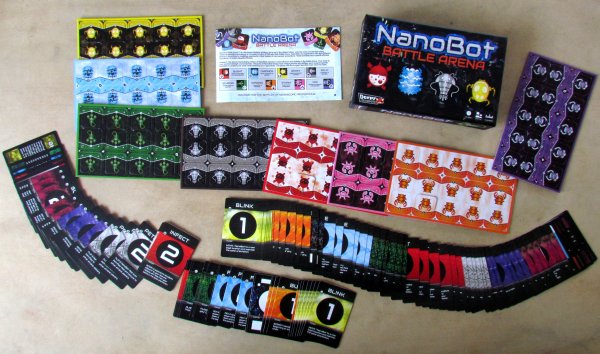 I thought, I knew, how war looks like. Lots of smoke, noise and human blood. Such battles are music of the past now. Today, all major fights are taking place in dimensions, which our human eye can not discern. Miniature robots are fighting for their masters and for the world, that can they never see for themselves.

Such tiny robots are main heroes of board game Nanobots Battle Arena, which was published in mid-2014 under logo of Derpy Game. It would not be so, if it was not for support of 329 players Kicstarter. Author Benji Michalek stands behind all this and created not only the game itself, but also its illustrations. Although it took a while for these tiny robots (with their dimensions it is not surprising), but eventually they got to our table and we noticed them.

Right on the black box, you will find four of them, such as blue Chronos influencing speed particles. Fortunately, even after lifting the lid, you do not need a microscope to find all the necessary components. On the contrary, most of the pieces are located in the cardboard sheets – we are talking about 120 tiles of nanobots, fifteen specimens from each of the eight available species. 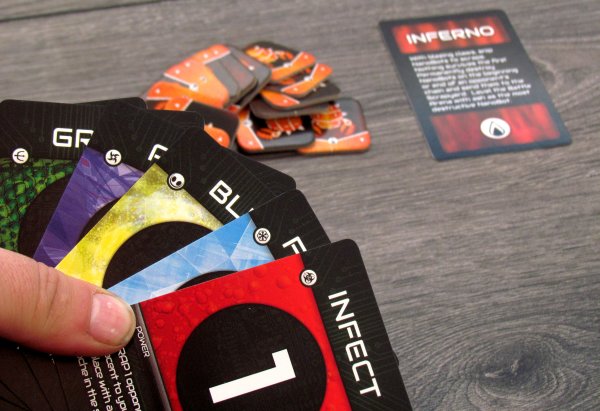 Each such square tile has a direction specified by arrows, in which nanobot looks and moves, its unique symbol (in the middle ring). The individual race then also have their own reaction cards, which is a total of 96 in the box. Each of them is dominated by a number specifying number of charges, but also a description of its abilities.

At the beginning of the game, each participant selects one strain, who will he represent. He obtains supply of fifteen or more (multiple) strains of selected color and thus becomes the species. Everybody also gets six reaction cards, but they must first be divided by their charge value to levels one, two and three. For the beginning, everyone gets three ones, two twos and one strongest three. Rest forms not three, but only one common draw pile, so it is necessary to reshuffle all three piles together.

It only remains to determine starting player, which plays out his first tile in the middle of the table and starts the war. Number and types of actions in each scientist is turn differs, depending on which version players selected. Since the basic one box allows almost exclusively (except duel) only essential fifteen-tile option, we will continue to talk only about it. This means, that player has obligation to first play a new nanobot on table. 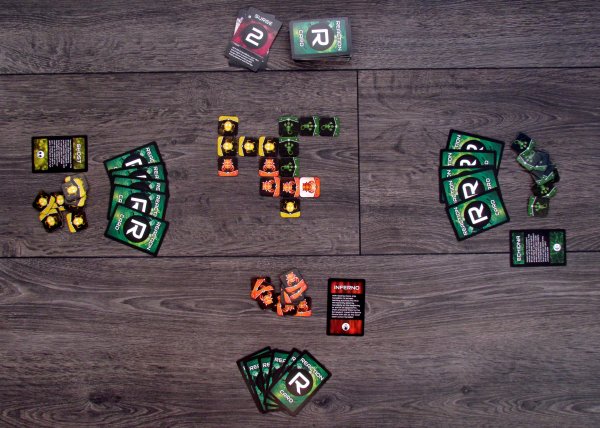 If this is not the very beginning of the game, player always has to connect his new being to already played ones. But place in the front of nanobot can be taken only by other nanobot of the same type. Others can join their creation only to other three sides of any piece. This place must of course be free. Players place their nanobots with dark side up, because the latter indicates, that tiny robot is immobilized.

By combining these pieces, each participant is trying to create longest unbroken chain of his strain. But only the longest of all can bring victory. At the end of each round, cards also enter into the game. The player can either play a card as his action or discard one to draw replacement. He draws up to the full number of six also in the first case.

Cards allow players to interact with chains, prepare better positions, but primarily serve as assaults between players. There always are numbers specifying number of charges, that can be used on one piece or split between more. In addition, players earn bonus recharge, when playing the card of their type (or vice versa lose one, if they are attacking player with his own card). Match ends, when one player runs out of his nanobots. Scientist with the longest chain of nanobots is the winner. 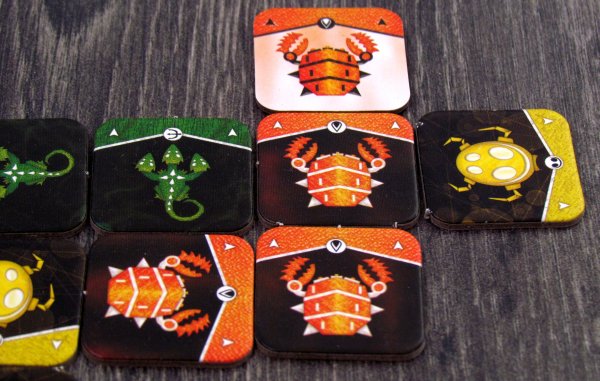 Nanobot: Battle Arena is love at first sight. Its simplicity principles will surprise, yet offers a heap of interesting ideas and tactics, that players can explore to get to victory. It is all about cards and of course actions, that govern the entire game.

Almost equally important is playing pieces. However, positions in a petri dish is ephemeral and others nanobots can easily move or completely destroy your creation. And in the struggle for the longest chain, this is definitely not good news, that would increase your chances. Fortunately, cards offer plenty of chances to strike back.

And because the cards dominate most of the game, in their footsteps goes luck. You can easily find yourself in a position, where you do not have action to take, that would bring you some benefit. Luckily, there is the possibility of discarding card instead of playing it, but you will lose an action to do it. So you are trying to minimize this, finding perfect fit for each card. 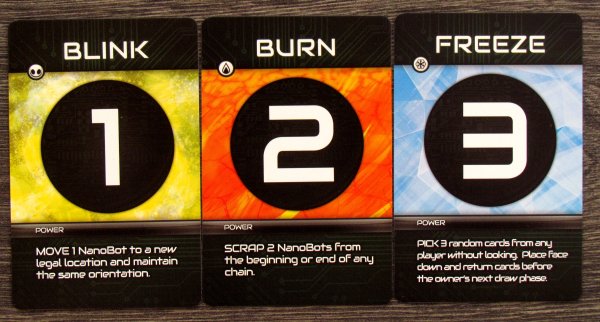 Organization of actions varies according to number of boxes. With more pieces in the game, author puts more and more emphasis on the cards, that are used once at the beginning and end of the turn. This completely changes experience and course of the game compared to fifteen-tile matches. We were able to peek into them only in a duel, because we only have one box, but even so, we can see the difference and excellent experience hidden in there.

Overall, rules are perhaps not very well understoodable at first reading, but everything snaps into place quickly, after you start playing and enjoying great-looking entertainment. Setup is done basically in a flash and only significant negative (except mentioned luck) is hidden in having to sort and again shuffle action cards before every battle. 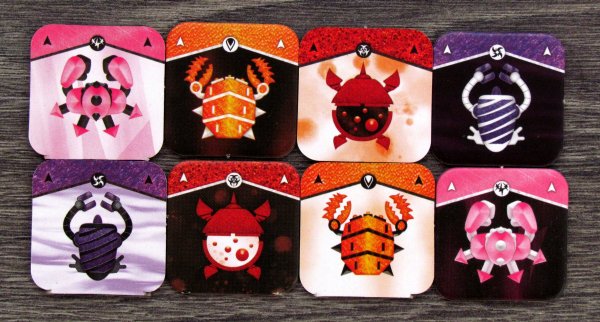 Nanobot: Battle Arena is a game in the first place very fast and thus also entertaining. You can not breathe, until suddenly you reach the end. Sometimes, you do not know yourself, if you have the longest chain, because your focus is often more concentrated on destruction and manipulation of the opponents. There is enough such actions in the menu, as nanobots would not do anything else. But you will enjoy all the pushing, burning and freezing, at least in Nanobot: Battle Arena.