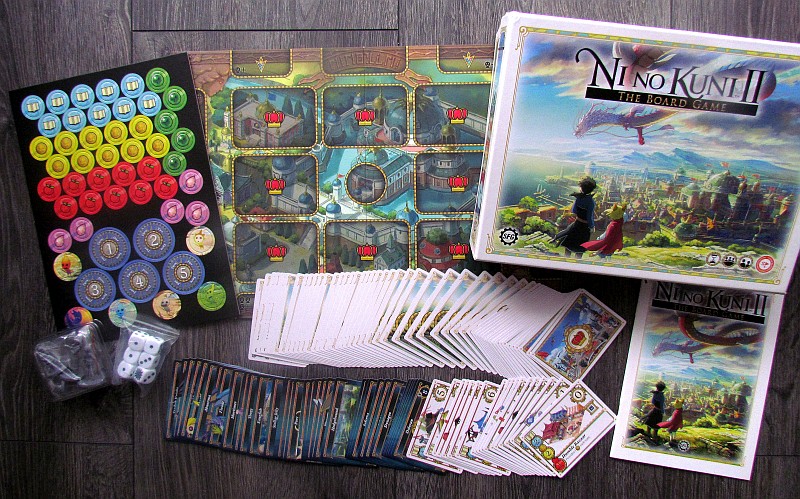 The White Witch was defeated. But this is just the beginning of our struggle. It is necessary to build a kingdom again, but it cannot be done without heroes. Not all places are safe. A lot of monsters stayed in their places and continue to wander the world. And there is a whisper of new horror, that grows in the receding shadow of old suffering.

The adventure on every corner awaits players in the box Ni No Kuni II: The Board Game, which has come a long journey from its home Playstation consoles to our tables. Under its origin are signed Steve Margetson and Bryce Johnston, who developed it for Steamforged Games. This is the company, that has acquired license for this beautiful drawn RPG game by studio Ghibli. In 2019, it came to the European market thanks to Esdevium Games.

On the lid of the smaller box, we see a view of the kingdom and also a pair of characters. A dragon flies through the sky. All of this promises a great experience, so players are immediately full of enthusiasm and spread the game board on the table. It represents a map of the city in the kingdom of Doloran, with spaces for buildings and also indicated places for an offer of quests (based on number of players from four to eight cards in simultaneous offer). From a shuffled deck of task cards, players randomly take and reveal one card per position and each location will be guarded by one random enemy card. The rest of the cards create a supply near the kingdom map. 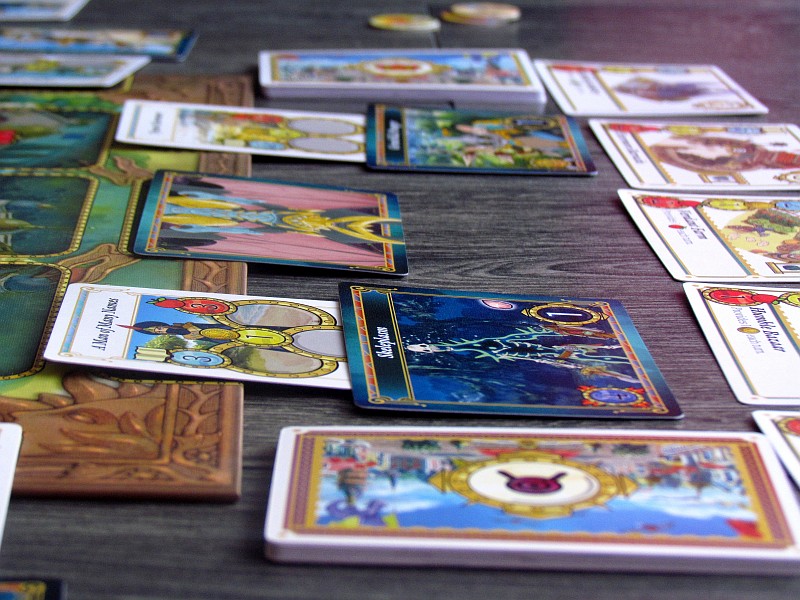 In addition to the plan, players create an offer of five Kingdom cards, that represent the buildings they can create. Within range, they also prepare a pot of tokens, but above all they choose one of the two bosses, they want to fight against during their whole match. Each player then chooses his character and gets a boost in the form of one or two higgledies – magical friends. This selection provides them with a card, a miniture and token.

Each game consists of five rounds, that players go through together as a team. And first of all, they always choose from the expeditions. Each has printed a minimum number of heroes (or higgledies) to complete and after players do this, they compare their power using dice roll. Together, heroes try to defeat the enemy, but always in a style of combat, that the villain prescribes. Heroes each have different stats, and therefore are give the number of dice, which contribute to each type of combat. If the sum of all the dice results is higher, than the monster’s power, then it means a successfully completed quest. 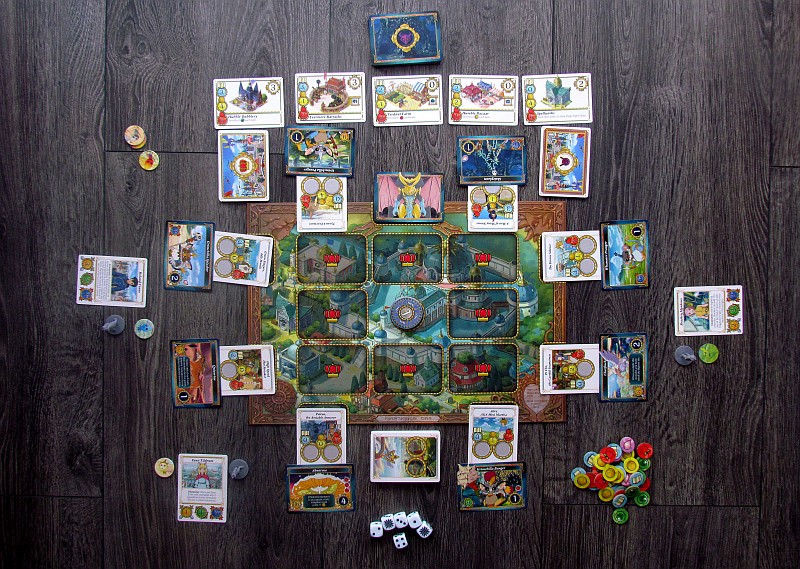 For these finished quests, players immediately collect the resources printed on the card. In the final phase of the round, new buildings for the city can be purchased for these tokens. Heroes can also receive food tokens from defeated monsters, allowing them to add or reroll dice once.

Gradually, players deal with the pitfalls of the empire and complete the resolved cards for new ones. After five rounds, players find out, how they performed. They must sum up their earned points of influence from kingdom cards. It is this sum, that needs to be higher, than their arch-enemy, who is trying to gain influence over the population with his evil schemes. Only if players have been more successful in spreading their influence, they can celebrate victory together as a team.

Ni No Kuni II: The Board Game is primarily a fairy tale. In addition, it is, of course, a shared adventure of all participants who must consult and succeed in fighting the enemies swarming all around only as one team. Together. 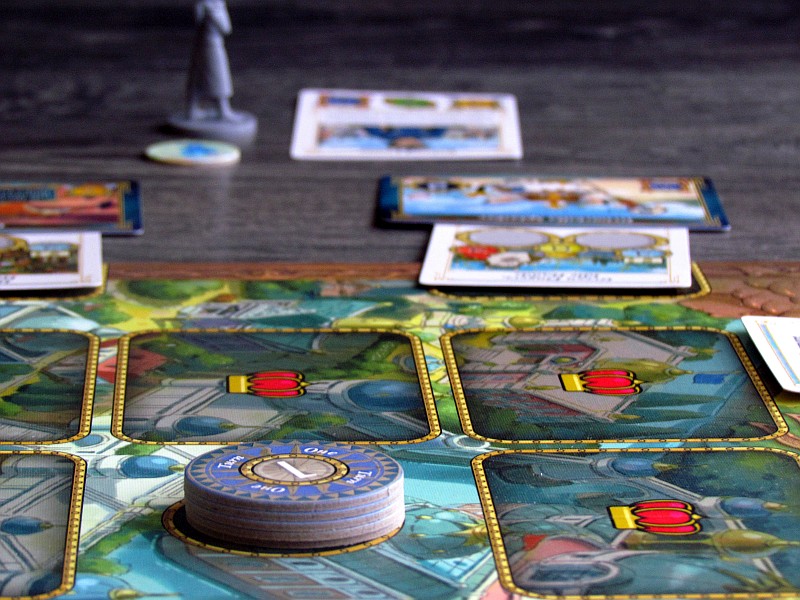 It is this fairytale, that drives the overall impression forward. The game looks beautiful, which goes hand in hand with the creative team. The graphics are taken from the digital game, so it’s a safe bet and looks gorgeous. The illustrations are detailed and really appealing. This is especially true of monsters.

Everything is based on efforts to meet the challenges and above all defeat dangerous opponents. To do this, players need dice. And here comes the first and main tactical team decision-making. Each place has its minimum number of heroes, that have to be assigned there, but it does not prevent the players from sending even more heroes or higgledies. That means a roll of more dice and a better chance of success. 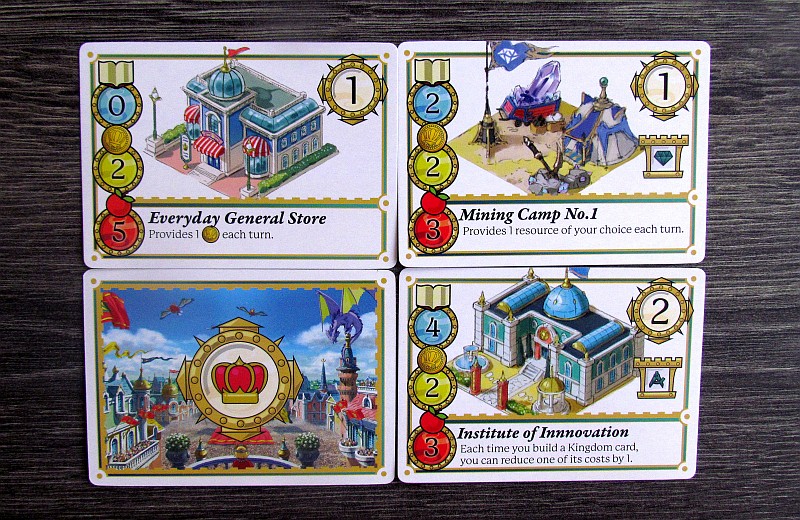 In addition to fighting, but above all, players must properly handle resources and buy buildings. In addition to the ending influence points, they can also bring important benefits to the rounds themselves. And you should not underestimate it. Basic constructions can be replaced with improved ones within the game and gain even more points. But the points are what reduces the impact of the game final  – only the sum of the points and no comparison of forces will decide the win.

It is clear that the game will attract the players of the original Playstation fun. But surprisingly, it has something to offer to others as well. Players embark on a common adventure, ideal for family fun. And that is Ni No Kuni II. We would like to compare the game with our beloved Heldentaufe. And in some moments, the comparison could be even successful, although this game is less malicious and contains almost no rivalry. 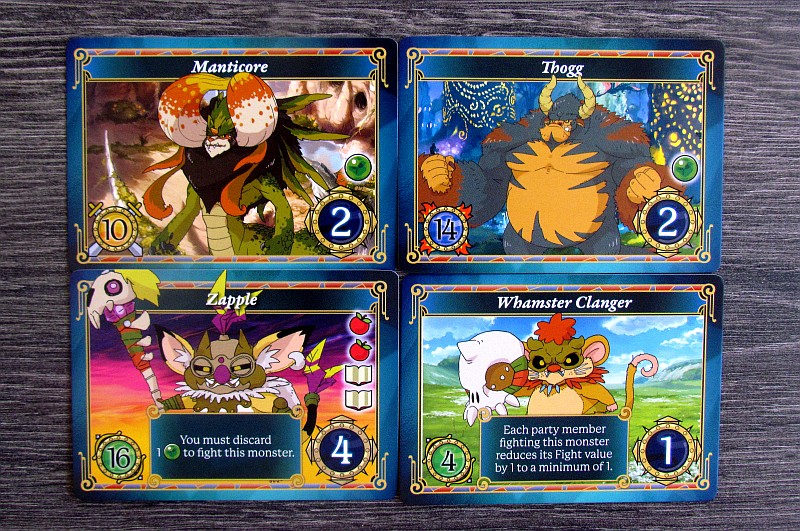 Game targeting also corresponds to family. The game takes place in a space of five rounds, which will run really fast. You can’t even imagine and suddenly you compare the amount you earned with the main bad guy. The whole fight will take place in about forty minutes, sometimes less. It might seem that the game is almost too fast.

Of course, it is not that children under the age of ten can play alone, but they can certainly fight with help of their parents to save the kingdom. In doing so, the number of seats and therefore the choice of tasks also vary according to the number of participants. Of course, it is better to have more enemies, that fortunately do not attack back, if players just let them stand on the edge of their city. But even in the minimum two, it’s not bad. 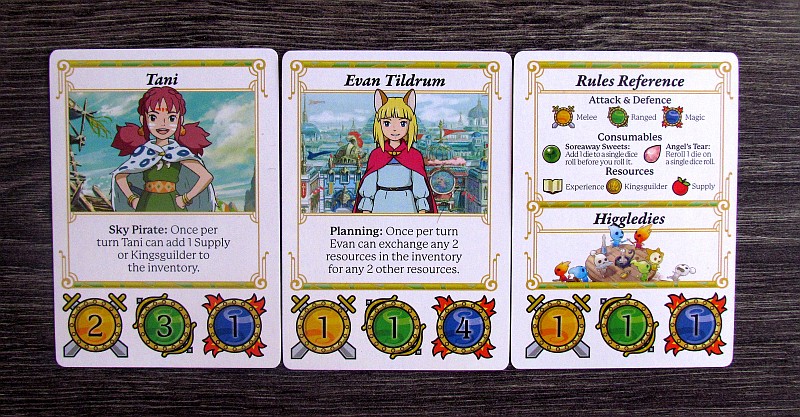 - too fast
- ending is just a comparison of points

by Dušan on 16. 12. 2019
I could think so! As soon as I start thinking about myself for a moment, went to save the princess and left the royal city unprotected, the enemies attack. [...]
comments
Leave a reply