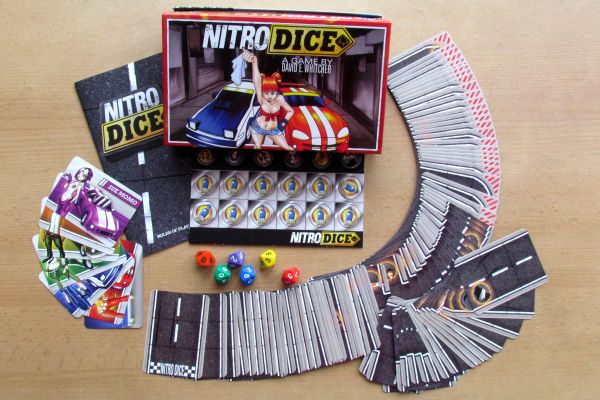 You’re asking for simple and high-quality racing board games? There are not so many as we would like, although in the few past years, the situation is getting better. Still the lovers of “pedal-to-the-metal”, tire howling and fluttering tachometer pointer should pamper their games carefully. Most of them consist of rolling the dice, which are often unpredictable and their results can beat even the best strategy.

Just throw the dice with a little more power and your car is sliding gracefully from the first position into gravel, a place ready for such moments. And you are left only with tears. You might have risked a little bit, but anyway you look at the ugly cube, which caused everything.

In real racing you also have to bet sometimes on the risk. But you can hardly look for excuse in someone or something else, than yourself. You sit behind the wheel and all the options you have fully in your hands. Chance or luck do not count, only a properly chosen strategy, patience and skill. And such is the Nitro Dice trying to be. 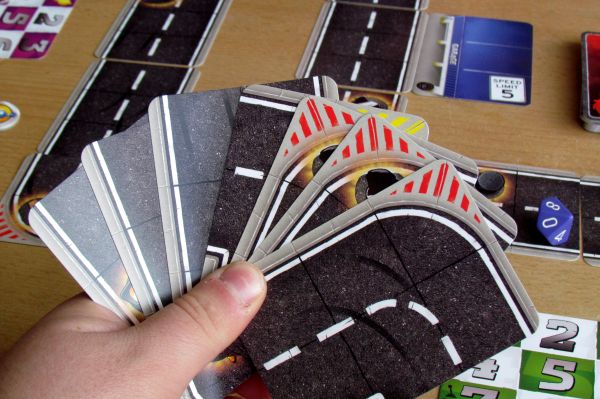 This is name of the game, which we will look under the hood today. At first glance it is a small and simple puppy. It seems that it cannot compete with the giants of the industry despite the efforts of its author, David E. Whitcher. But even small dwarfs may try to fight with the giants, and if they have a big heart and honest intentions, maybe even win. Will this rare moment happen today? We will soon know. I mean.. we know, but you will soon know.

All graphics on cards is drawn by Erik Lervold, Minion Games took care of the production and release of the game. You can buy Nitro Dice for a price, that corresponds to its mostly card content.

Nitro Dice will arrive at your home in a discreet little box. If you expect a card game, your impression is correct. The picture of smiling beauties at the start of a race covers only cards hidden inside. 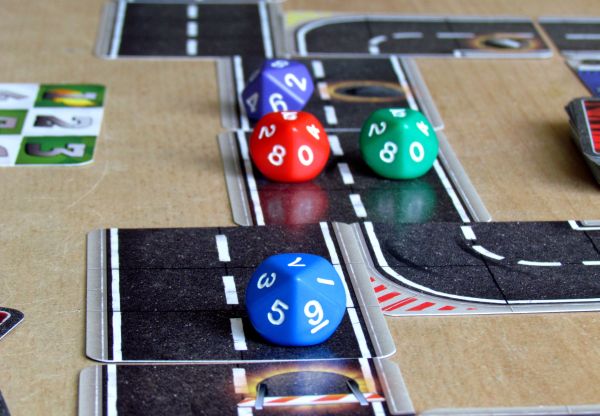 But this is where Nitro Dice becomes a game with surprise. Except cards, you will find inside also a few more thingies, that were hidden from you. The first one is definitely six ten-sided colored dice. In second place we should name cards with numbers from one to nine on one side and a portrait on the other. From a small sheet you break out several tokens with nitro containers and interior damage indicators.

And how to race with only cards? Actually it’s a lot easier, than it seems. Some of the hundred cards have the portion of racetrack on them! Yes, it’s incredible, but just with the cards you are able to build circuit, on which you will then be able to compete. Many who were afraid. that the race will be in the form of Nitro Dice only in their imagination. are certainly relieved.

So it is now clear, that first you must build the circuit according to your taste. Imagination has no limits and each of the racing fans can add some of his ideas to the prepared six circuits. You have at your disposal straights and curves of two kinds – yellow and red. Each circuit needs, of course, a start and finish line (in the game is only one card, so you will need to build a circuit or a closed sprint). Near this start/end section you will also put the garage card, which players can enter during the race with damaged cars. 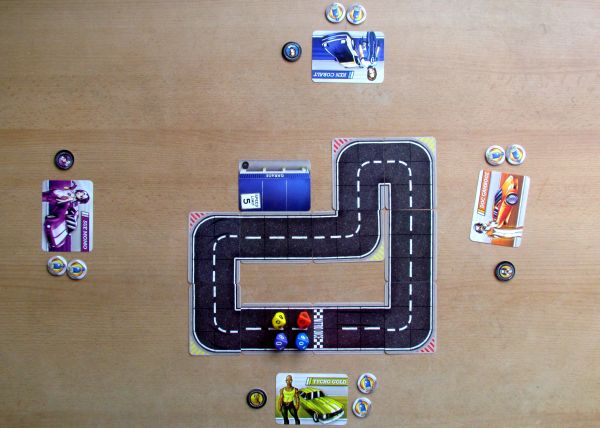 You lay one of the colored dice on the start grid for yourself. Yep, this is your race car. The start order is determined by throwing the dice. All of them set to have zero on top – it is their starting speed, or you may call it lack of speed. Each player gets one card in his colour with a portrait of the racer and also an indicator of damage. For starters, lay the indicator on the card on the highest number (nine). Accordingly you will receive your starting hand consisting also of nine playing cards with images of corners and straights. All racers are sure pleased to get an extra pair of tokens with nitro, which can be used anytime during the race for short increase in speed.

In the first round, the movement starts with player in the first position. From the consecutive turn, however, contestant with the highest speed moves first, although he may be far behind. At the beginning of your turn, you select the speed, at which your car moves. They can either keep the current speed, accelerate or brake.

Without any penalty is only change by one number up or down. The player immediately adjusts his racing number on the dice accordingly. However, if player wants to accelerate or brake by two, the second point requires payment of one card from his hand. But you do not have to worry, because at the end of round one, cards return to you thanks to card draw from a common pile. 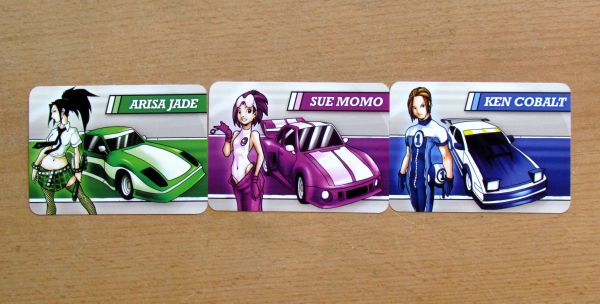 Now players cars can finally move forward just about as many fields as corresponds to their actual speed. Track cards are divided into fairly large squares, each of them represents a place, where only one car can stand. You do not have to worry about having to count steps according to the center line of the road, as in cycling game Arrivée. Here it is pretty easy.

You pay with movement points only when you move forwads. When you change lanes from one side of the road to the other, you do not pay movement, but a card from your hand. Lane changes will usually happen mainly for strategic reasons, when you want to avoid an obstacle or rival vehicles. But the payments are not over yet. Players must surrender another card each time they move from one track card to another track card. Since most cards measure three steps in lenght, then you give up at least two in each turn only for this purpose. It is called maneuvering.

In your turn, you can make opponents driving unpleasant, if you prepare for them obstacles. These obstacles come as cards from your hand, because you can play a card and replace part of the road. There are holes or puddles of oil, which force fast cars to maneuver, pressing them to make mistakes and to collect damages, which is slowing them down. 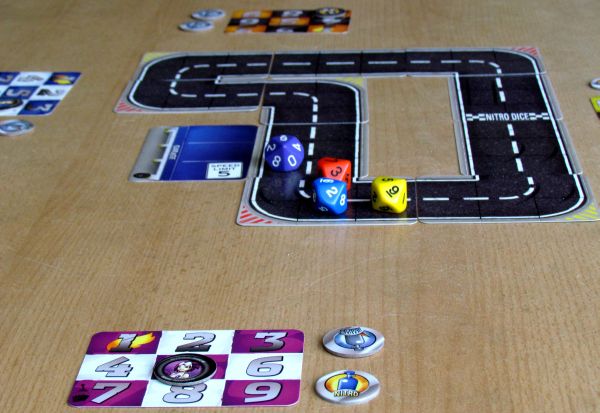 With more players you can sometimes find yourself in a crash, if you do not have cards, which would pay for the braking distance. In this case you get a point of damage for each speed you didn’t manage to brake. You move a chip with a portrait of your player from the initial nine boxes down by so much. From that moment on, you not only reduced the life of your car, but also the highest attainable speed and number of cards in your hand, all just to this number.

At the end of the round each player draws cards according to positions. Leader gets fewest cards, the most get player in the last position. Despite the regular income of cards, as the game progresses and the car shifts into higher speeds, you sometimes find yourself in a need of more cards, than you have. Paying for maneuvers is expensive. And so you either move less or you have to pay with damage points.

You can also use the nitro token twice per race. It moves you two steps closer to your target – finish. During race you may also drift – you pay one extra card, and instead of moving forwards or sideways, you can move forward and also change the lane. 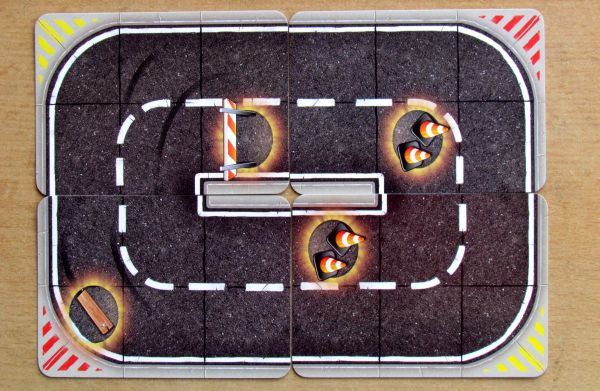 Unlike in most racing games, here the rules clearly state, that the winner is the one, who crosses the finish line further in the same round. It is not a common thing. In Formula D, this fact is not directly stated in the brochure and the players must agree on it.

Nitro Dice is an interesting card game, that seems very simple at first glance. But as you get involved in racing, you will discover, that it is very important to watch over. You have to watch their numbers, not to use them too often. But it‘s difficult, because the faster you go, the easier you‘ll get into trouble. Card payments for crossing from one track card to another car is very tricky principle.

Unfortunately the card maintenance is associated with one of the biggest problems. While preserving the flow of the game, it is sometimes difficult to keep a clear overview of the number of cards, that a player must pay. While counting, you easily forget or overlook something. 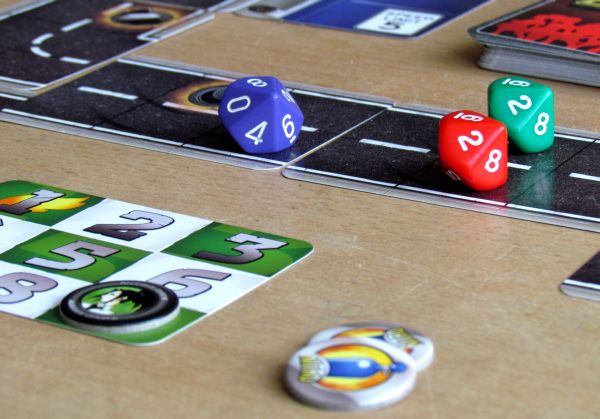 Racing itself is represented only by cards, and everything happens right on track. Chance plays no great role and victory is designated mostly by strategy choices.

However the greatest weakness of the game can bet he number of players. But if you manage to get together at least three opponents, then you will be satisfied. However, with only two players, Nitro Dice like most racing games becomes less confrontational and loses entertainment. This problem can be solved by chossing more cars for each of the players. Thus blocking, pushing and dribbling get back into the game.

Zigzagging is the most interesting part, because the players must deal with constantly disappearing cards. And if they push too hard, they will eventually slow down their car until the end of the race. Limitation of number of cards and speed according to vehicle damage is a great idea and is well implemented. That way no one will not go on the edge without the real need.

Finishing of the game is simple. You race dice instead of cars. Illustration of competitors are a bit japanese style, the road looks just like a road, so no problem there. Due to the fact that the track is built only with cards, there can be easily exist principle of changing track as you race. At the same time it brings also the downside of moving cards, because light paper has longing to move on the table. But it‘s really just a trifle. 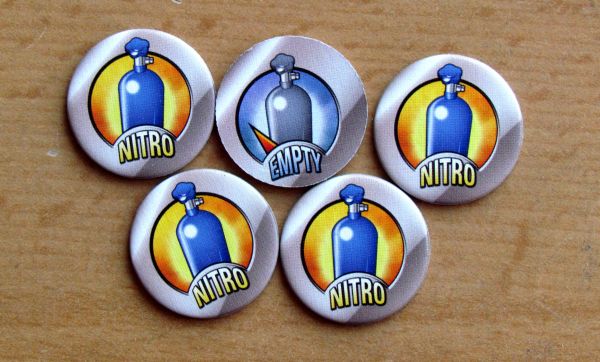 You will find several tracks ready in the rules. They represent different ideas and thoughts, that you can easily use in your own designs. You have a choice of playing straight from the box, or trying to put together some of crazy megatrack. Imagination has no limits here.

If you compete in more rounds (and in most races you will), you’ll certainly appreciate the opportunity to stop at a garage and repair their damage. Car gets repaired that many points, as many rounds you stay in.

Nitro Dice is a surprisingly fine combination of a card game and racing. It mixes together several classic principals and connects them in an intriguing ways. If you like racing and need some game, that is small to take it with you wherever you go, then Nitro Dice is a good candidate.

Card game Nitro Dice showed us, that racing is possible without cars and throwing dice. We give it credit for that. You move your car and shift by playing cards, which keep you at constant risk evaluation. Fun arrives to table with at least four cars on the grid. At this specific time, Nitro Dice will reward you with nice entertainment.