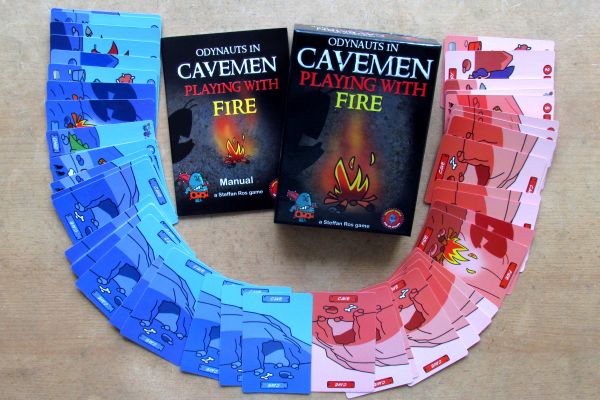 In our time, we take fire for granted. We even promoted it to second level with electricity, which could be called by some ancient people “fire that does not burn”. Flames, in their tangible existence, are also dangerous, when they spread out of our control. That is, why burning element already got awe of people in cave age.

Let us now return to those times, when people finally tamed fire and began to use it to their own advantage. Well actually not human, but a completely different animal species, that inhabited the earth long before us – Odynauts. They’re creatures of many shapes and colors, cheerful and funny, although maybe you do not know them.

The author of this game is Steffan Ros. His imagination was transferred on cards by illustrator Uco Egmond. The game comes from Netherlands, a country of tulips. Game of this origin appears on our server for the first time. Cavemen: Playing with Fire was released under publishing company in Odynaut Games in 2012. 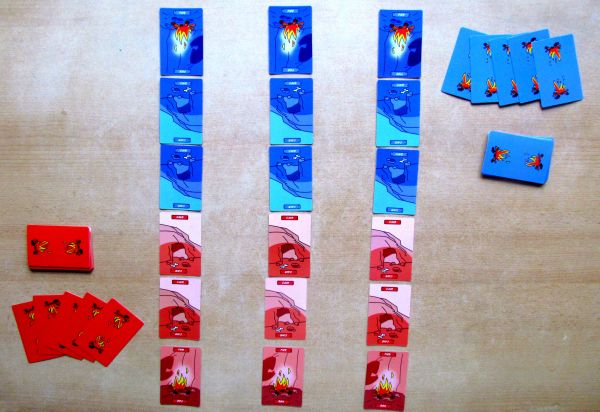 You can see, that not only this game contains Odynauts, but also the very company, that created it is lead by these creatures. Maybe. They are just keeping us in blessed ignorance. So let’s look at their face and reveal, what they really are. At least in this card game.

Cavemen Playing with Fire is hiding in classic hard cardboard box for two card decks. The opening image is delivered in a subtle way, it only has a fire burning in the middle and some shadow monster is approaching it from the left. Overall, the box is very dark and subdued, but we are concerned primarily about what is inside.

That means fifty cards for playing the game as well as rules in English, German and of course Dutch domestic version. In case you would like demonstration, which helps you to learn the game better, then go to www.odynautgames.com. 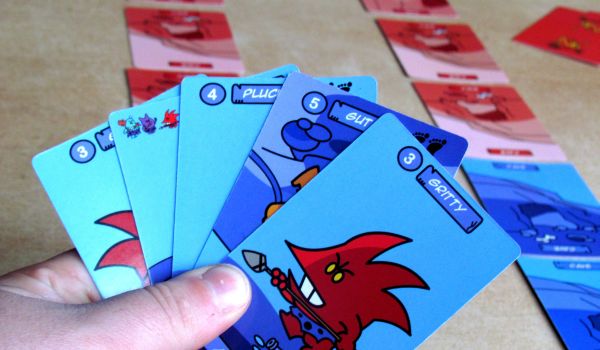 The cards are of two basic types – red and blue, which is divided into two identical decks. One for each of the opponents. Inside you will find pictures of aggressively tuned Odynauts, but also their caves and three fires for each side. Altogether, each player receives 25 cards in the beginning.

On those cards with characters illustrations, there are two signs – on both upper and lower side of the card, so it does not matter, if you are holding it upside down or not. You can always read it. This is a nice convenience. Moreover, it is also important for the match itself, because card has to be read also by opponent sitting across from you.

In that mentioned line is in first place mentioned strength of the Odynaut (ranging from one to five), then his name and possibly also a special ability. In some cases, there can be a portrait of another Odynaut instead of the number. This marks suitable prey for this monster. 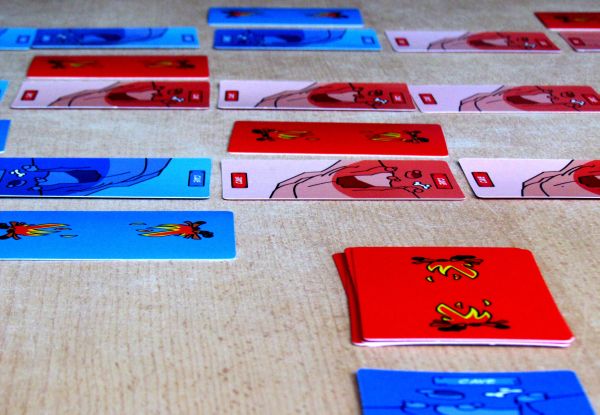 Each player assumes the role of indigenous tribe, who take care of their precious fireplace. Your mission is to extinguish one of the opponent fires burning and thus put him to starvation. Successful firefighter becomes immediately also game winner.

But first, preparation will stand in your way. At first glance, it may look complicated for a card game, but it is only an illusion. One game played and you easily prepare everything for the next from memory. But will you be interested in this re-match?

First you must find three fires in your package and light them in front of you in a line. There must always be a gap for one more card between them. Above each fire you add two cave cards, giving you your current starting territory. Opponent sitting on opposite side of the table must put cards on table in the same way, but both your territories must meet in middle of the table. Eventually, you will have three long columns of six cards, ending on both sides with fire – one blue and one red. 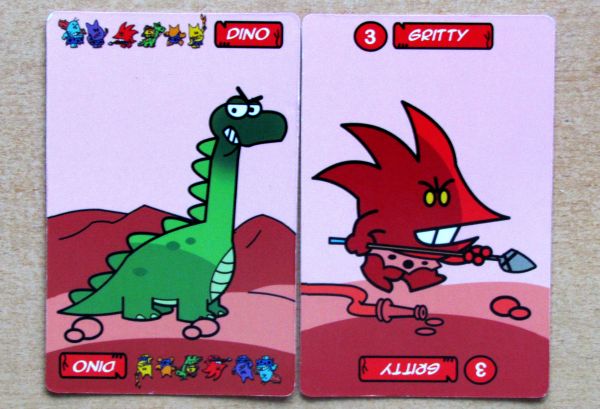 Mix all the other cards and place them face down as a drawing pile. Take top five cards into your hand. These will create your invitation to the game opening. In case you are not happy with these cards, you can discard and draw other five. Those cards, however, will go to the discard pile, and their journey back is not as simple as in other games.

The player who starts first round has one option: to play some of his caveman cards on the table. He can play his figure to any of cave or fire cards, and not only among the three columns on the table, but also on their outer sides. Cards are played face down of course. In one turn, you position up to three cards, and it will not necessarily be only characters.

The second option in the card action is playing you own cave on the opponent’s side. By this move you improve your opportunities for deploying soldiers, that you can immediately use. Superseded card is moved to the discard pile. 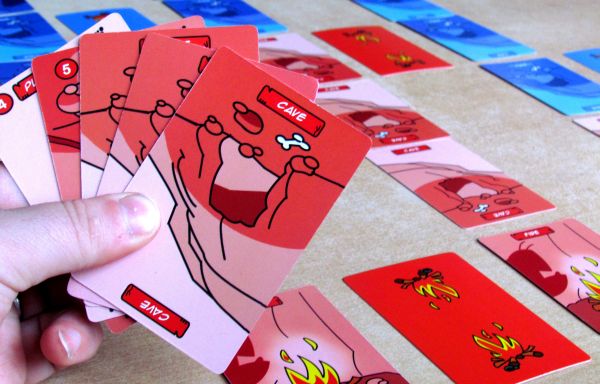 Once you play three cards or less, if you do not want to play more, you can discard another card from your hand to the discard pile. Then you draw back to five, which you had at the start of turn. Then your round ends and you pass the word to your rival.

But now we should say something important to discard pile. Cards from it are not shuffled back into drawing pile, when you run out of cards. If you have wasted your strength, it’s your fault. The only time, when you can re-shuffle used cards back into the package, is moment, when you lose specific characters in the struggle – Zippy and Ballsy. This indication can be found on their cards next to the name in the form of a symbol of four stacked cards.

How can such fight happen? It starts during first phase of your turn, which you skipped in the first round, because you had no outright monster. This phase is Movement. You can walk as many columns in the horizontal row as you like across your caves (even the four steps from the complete right to complete left). But when you start to move the card closer or further from your opponent, ie vertically, you can do this only one step per round (and you may have previously moved to the side). Monsters cannot in any moment move diagonally. 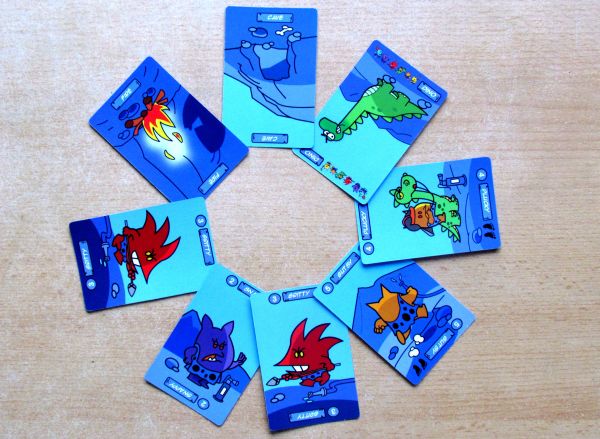 But when two rival character cards become neighbours – that is directly above each other or side by side, fight starts immediately. So far, the adversaries do not know, how strong is hidden enemy monster, but now both must reveal their units. In most cases, a higher value in the left corner wins, although there are minor exceptions.

Slaughtered card is immediately removed from game and put into discard pile, where it will wait to see, if you are able to return it back to the game. This means, that player has to work very carefully with his forces and wait for right moments to come forward.

Game ends, when one of the Odynauts arrives up to an opponent fire and uses a single action to extinguish it. This game ends in defeat of creatures, which have lost one source of their livelihood. The second clan can celebrate victory and a little more living space in the valley. 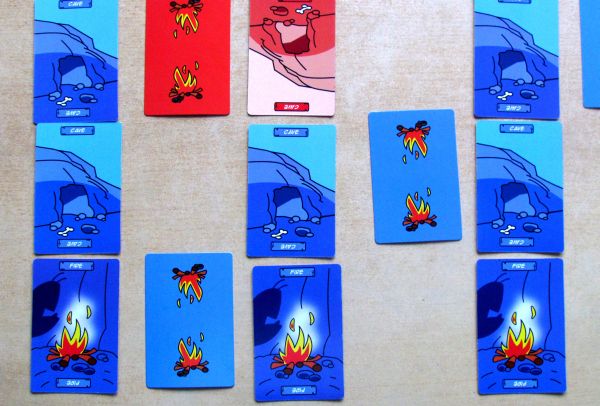 Cavemen Playing with Fire is basically a very simple game of Stratego style. Players create their playing area from cards and move their characters across it. Their identity is secret to their rival. And while you move and put new forces into the war, you are trying to hit the enemy where it hurts the most – at their homes by the fireplace.

Despite its simple basis, the game contains new interesting ideas. One of these is deployment of characters from hand while you play (something similar as Chess Me (review). You then put it to any of your own caves. And here immediately starts first conflict with your adversary, when his rocky shelter can be occupied and used for your army. You will use it to send an urgent shipment made of powerful creatures, directly into the heart of their camp.

But moving forward is quite slow. You can still change the route from left to right, but once your Odynaut gets next to opponent, there is no way to escape the duel. This is difficult to avoid, so you just need to think tactically and have a little luck. Every character has its specific characteristics and can be used to some advantage. This is one path to victory. The other is bluffing, of course.

Medieval theme is not essential and game could instead happen in a sci-fi environment. But why not Odynauts? The graphical processing is nice and will be liked by mostly everyone. Especially Odynauts are really cute creatures, that you would immediately take back home with you as a pet.

Cavemen Playing with Fire is a clever little card game, that took old and obsolete mechanism and brought new ideas to it. Made it more tactical and interesting, while maintaining the main psychological touch. And we appreciate it, because what is old, is good .. Or not? In this case it certainly pays off, especially when it comes to these improved Odynauts. So on to the Middle Ages you go!

- moving is not quite intuitive
- some unspoken things in rules

Cavemen: Playing with Fire is not about funny time with this flamy thingy, but revolves around putting it out. You become such a firefighter, which is trying to harm others by destroying their fire. You will use all your Odynauts to do that, because that is how your race is called. But their movement will be hidden in front of your enemy, you play cards as hidden to your caves and fireplaces - this means with picture down. When they meet some opponent in combat, then is their true identity revealed. Precisely these secrets together with special skills of different characters is what makes this card game tick. It has nice illustrations. Only moving could be a little more straightforward regarding neighbourhood of cards, although they are one card ahead (vertically) from each other, they are adjacent at the same time. Its a little counterintuitive and you might overlook it from time to time. And there are slight blank spaces in the rulebook. But if you like games with a little secret in them, this one is worth looking at..