Review: Odynauts in Rule the Roost – chickens are biggest fear of every Odynaut 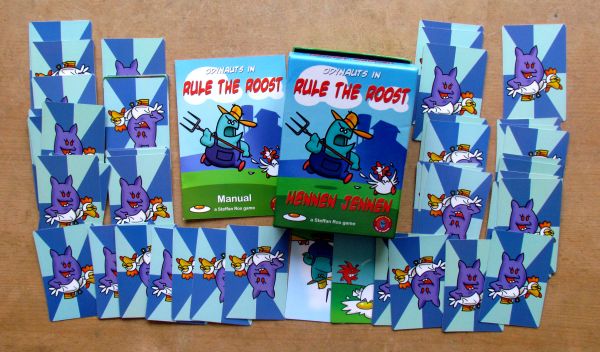 Hen cackling is the worst nightmare, that can happen to any Odynaut. It’s not caused by the fact, that colorful creatures are afraid of chuckle. Quite the contrary. They take care of them on farms, keep them for eggs, but hens are easy target. And that’s what makes Odynauts so afraid. After a few nights of wandering around, they are eaten not only by hungry foxes, but also stolen by neighbouring farmers looking for a way to expand their flock..

And every night you’re standing at the door with pitchforks and guard them. Even if your lids are closing, you are still trying. Fortunately, there is no boredom and silence at Rule the Roost card game, which is the third and final game of Odynaut family. Small colorful creatures have dominated casino in Chipleader (review) and in stone age in Cavemen: Playing with Fire (review).

All of them (also the third, today reviewed game) were released in the same year of 2012. They have a common author Steffan Ros and illustrator Uco Egmond. Cute drawings are present also this time, as they are presented by publishing company Odynaut Games. 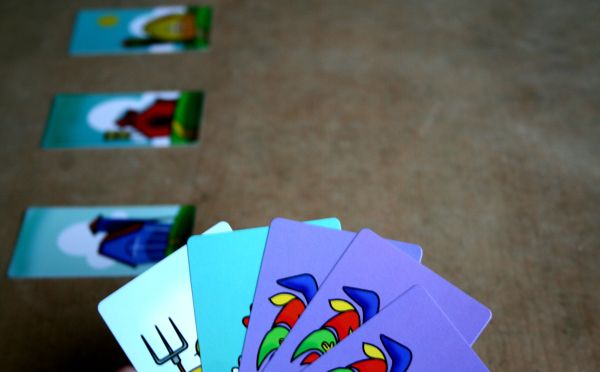 Box with the game wears a figure of angry farmer with pitchforks, chasing a frightened hen. Dimensions of the box are one deck smaller and closer to the classic format, than the last time reviewed Chipleader,, but its still somewhat oblong.

It is quite logical, that two decks of cards fit into the box next to each other. Game thus consists together of a total of sixty cards, which comes to us in eight kinds. There are roosters, who will become the players and thus also have four different background colors. Each shade is available in three copies.

Other cards are three barns, where everything will take place. The most important, however, are hens. Only their presence can help you at the end of the game and bring victory points to your pocket. These include five different action cards – there are eggs, foxes, key pairs and farmers. Individual cards have different numbers and exceptions are only farmer with a key. These two cards are present only in one piece inside the deck. 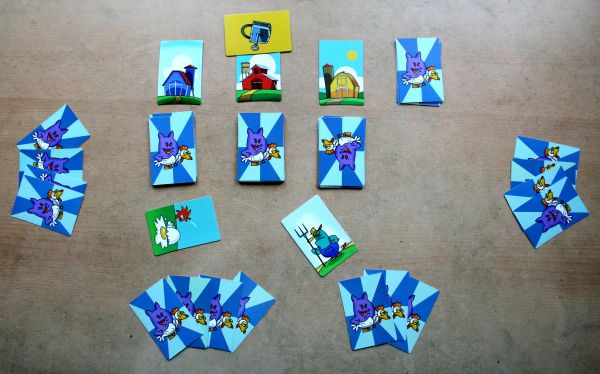 The name of the game is actually idiom. This means, that you are the strongest person in a group, who makes all the decisions. And you will fight for such a position in the flock of hens in three barns. By their distribution on the table is the game set up almost complete. You have created the farm.

Each player chooses his color from red, blue, purple and yellow. In these martial colors, you get three cocks, who begin play outside – in front of a barn. Their (and your) job is to guess, where most hens are located and try to settle there. All other cards are shuffled, prepared into drawing deck and take two cards from there, which brings their number in your hand to five.

During the game, everything runs easy. You play just one card from your hand face down under a barn each round. It can be a hen or rooster, it’s up to you. Hens add value to the barn, but only one player will receive them. It will be that player, who will have most roosters there at the end of the game . In event of a tie, points get divided. 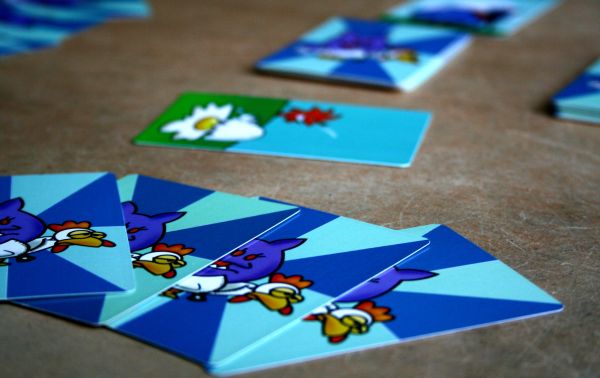 Because cards are played secretly face down, no one knows exactly, which barn is the most interesting. That is also the charm and tension of the game. And bad guys can interrupt your turn by playing a card of shattered egg. There is five of them inside the deck and they can really stir situations in the game. If someone plays this egg, when you are sending your card to the barn, this card does not arrive there. Instead, it goes to the discard pile, to never come back!

It is therefore vitally important to play rooster cards (you only have three, remember?) in a way, that it does not get scared off by opponents and thrown away without any gain. But that’s not all, except that you can move with hens in barns using action cards. These are two kinds of farmers and a lock. As soon as you are satisfied with state of some barn (at least you think so, because you cannot peek inside), it can be locked with a single lock for rest of the game.

Only one who can circumvent this prohibition is farmer with the key. This is just one of the two available action cards. Second farmer is holding a pitchfork instead of a key. Both allow you to do the same – look at the contents of one barn, take a card and move it to another building. You will not show it to opponents, so everything will be strictly confidential. 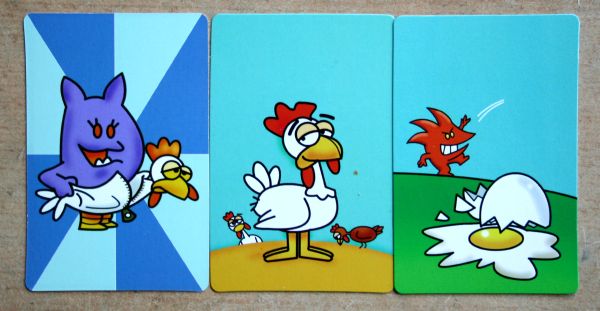 Finally we have a fox, which affects the final number of points in the barn. You can play it directly from the hand to the barn, as if it were a hen or rooster. Foxes are in greater number in the package – there is six of them.

Game ends, when you run out of cards in a drawing pile. At that point, players will play the rest of cards in their hands. This is followed by counting points. Each barn has a value equal to number of hens. Foxes are deducted and every redhead is satisfied with one hen. Points for barn go to a player, who sent most roosters there or more players can share this gain. Winner of the game is player, who accumulated most points from all barns and owns largest flock of hens.

Rule the Roost is a very nice game, which contains a good dose of aggression and conflict. This time, however, carries with it a serious amount of luck, that many players will mind. They are hereby being sent away, because Rule the Roost is not for them. 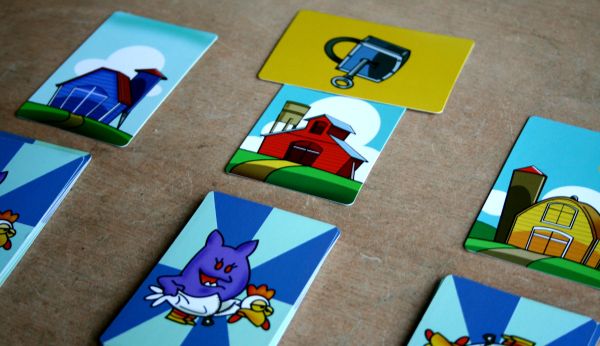 On the contrary, all who are looking for easy and really fun card game, should spring to attention. For them Rule the Roost may become a hidden treasure, that they have been long looking for. Card selection is soo simple at first glance, but opponents should not guess, what are you playing. In this case, you can simply lose a valuable card of rooster.

In this luck of opponents playing an egg lies the biggest problem, because once you lose a rooster, even accidentally, you have virtually no chance to compete with others. But you can still try to shoot off their roosters too and get yourself back into game.

However, even in the case of bad luck, you do not get bored during playing, because the game is over really quickly. Therefore it is not bad to play a few matches and add values across them together. And only at the end determine the winner. This lowers effect of random shooting down a bit. 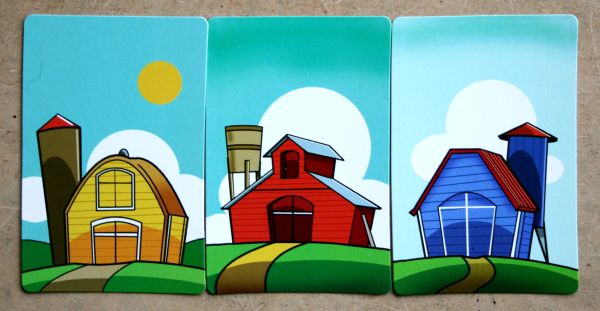 If Rule the Roost is a fit for someone, then it is definitely for children. They will enjoy the game from start to finish. Moreover, thanks to the aforementioned short game time, it works also with less patient children. Not to mention illustrations of odynauts, you will definitely fall in love with.

Our rating game is eventually formed as an approximate average somewhere between the two camps of players. With its rapid progression it probably eventually will amuse even opponents of luck based games, because all that chasing after chickens is really funny. The game is great for families with children, who learn to love it very quickly. Thanks to nice illustrations is this game a ease quickie built for many..

- too much luck
- when you loose a rooster, you can hardly catch up

Rule the Roost will lead us between three henneries, which are fighting for favor of roosters. You will send them to these buildings together with chickens to fill it up and obtain majority with fowls there. But others can surprise you while you are playing and make you lose your card. Barn value is based on number of chicken present there. All cards are put there together in turns and in secret, so nobody knows, which card are you currently playing. And your efforts can be intercepted using action cards or you can lock some hennery, so there cannot be any card added. You can even switch cards between barns! Whole match is really quick and dynamic in all player numbers, while maintaining really simple rules. Children enjoy playing this game very much. But often luck can decide about result, if somebody catches you playing a rooster and forces you to discard it. It does not arrive into barn and you have disadvantage to others. Rule the Roost is very nice game, which will appeal to children and families and offers nice relaxation..