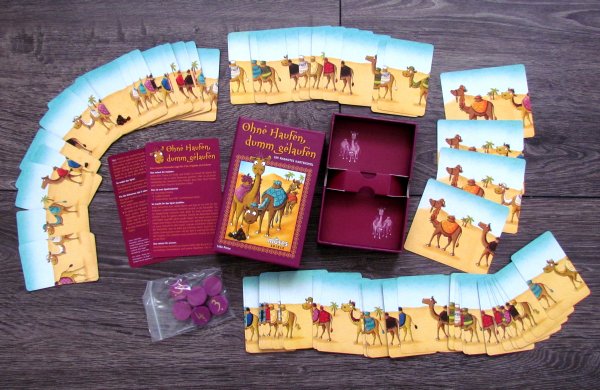 Its would not be a true caravan, if it left no marks behind. Not very fragrant, dark and slowly decaying. Poo. We are talking about such breadcrumbs for those, who could get lost in the desert. But we are not lost, we are in the lead and travelling with self-esteem. Také a bridle in your hands and start your walk!

Even camels can be cute. We will find this as one of new features in card game Ohne Haufen dumm gelaufen, created by Udo Peise. Everything revolves around caravans and those things, row of camels leaves behind. Everything is set in the world of beautiful illustrations by Stefanie Reich, published in 2014 under flag of Moses Verlag.

Author describe the game as aggressive card game at the little purple box describes. And that definitely hits the mark. Literally, as you will see in the picture, where one of the camels curiously explores a dark pile, while others are pretty surprised, what is happening. 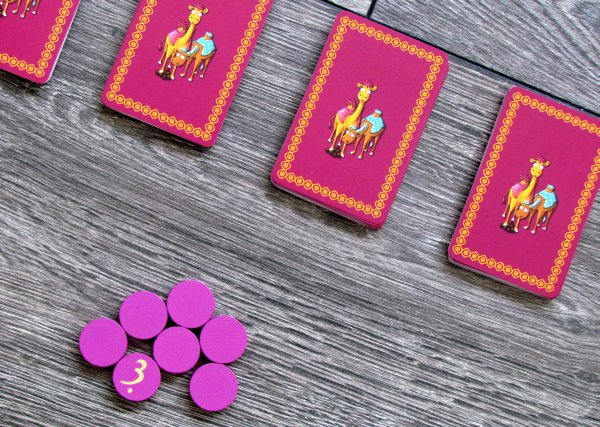 To do this and peek inside, we need to pull out a drawer. This is quite easy, because it has center section, where your thumb exactly fits in. Inside the cardboard drawer, first offer is cards of camel leaders (who are twice as large and double-sided). These hunchback lead your caravan, but in the right part of this card, we already see head and mane color of next caravan member in order.

Remaining 72 card pile is created by a little dumber camels, who prefer to go in worn footsteps. But their cards are a bit special, because you could not see one whole camel on any of them, but two halves instead – first behind of one and then head of second. Each has a differently colored mane, which plays an important role. At the bottom of the box, there is also a bag of seven numbered tokens (between three and six).

At the beginning of the game, players each choose one leader card and place it ahead. Wooden tokens are shuffled, but before that, players have to find one with the three and put it in the middle of the table. All cards are shuffled properly, combined into several similar-sized stacks. Number of packages lying and waiting for their temporary owner must always be one more, than there is participants in the game. 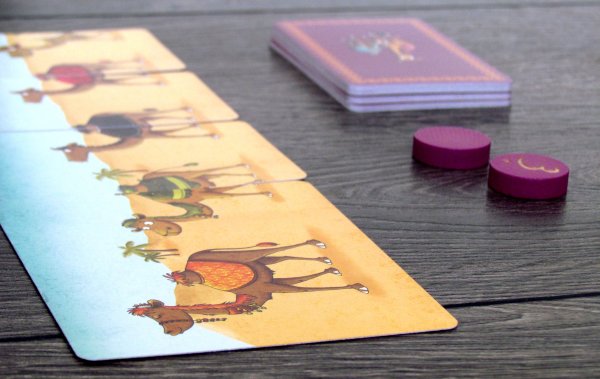 Battles are attended simultaneously by all. Each player chooses one of available decks and quickly tries to search it. His first target is card, that connects correctly to right part of his leader card. There has to be match of mane. Once player does such a finding, he places that card, sets this deck aside and takes another. This concretely means, he has only one deck remaining on the table, because all others are in possession of his opponents.

New deck is again target for a new camel search: half of his body can already be seen on the previous card. Bottom is usually followed by another head, but new camel must always bear a different color, than rest of that player caravan camels. But sometimes, instead of the new camel, there is a smelly pile lying on the ground. This card will become interesting for players, when they have caravan of that many different colored camels, as revealed wooden token number is showing.

Only, when a player manages to find even this last card in some deck, he can shout name of the game and others have to stop playing. Everyone sets his deck aside, but before acknowledging defeat, they must check accuracy of shouting player caravan. If everything follows rules (correct number of camels, none of same color and there is a pile on last card), he can take active wooden token for himself. Match then continues with further rounds until there is even the last used (after seven rounds). Winner is the player, who has won most tokens (and therefore also rounds). 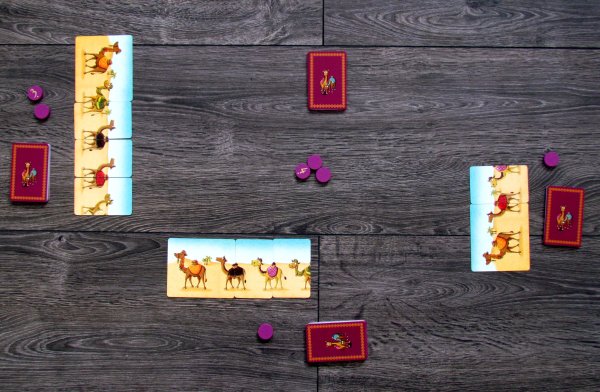 We do not want to conceal the fact, that we genuinely enjoyed playing Ohne Haufen, Dumm gelaufen. This card game is so successful from the moment, when it catches your eye. And the gameplay is addictive, but in fact, you can easily use it to relax. A simple search for cards in decks is surprising fun.

But at the same time, it is difficult for smaller kids to hold many cards in their hands, as they are unable to quickly flip through. Therefore, you can find variant for them in the rules as well. This time, cards are distributed on the table face down (for the very smallest even face up). Rules of rest of the game are preserved.

Luck surprisingly has not much impact in here, because with each card received, players have to replace their deck. Therefore, even if he was lucky to find card quickly, its not easy to find more. Everything remains dependent on the observation speed, shuffle through cards and ability to concentrate. Game also has subtle memory element. But it can always help only during one round, because after that, all cards are shuffled and players create new decks. But when the players pass piles quickly and look for camels, they may remember positions of other cards and use them later in the round. 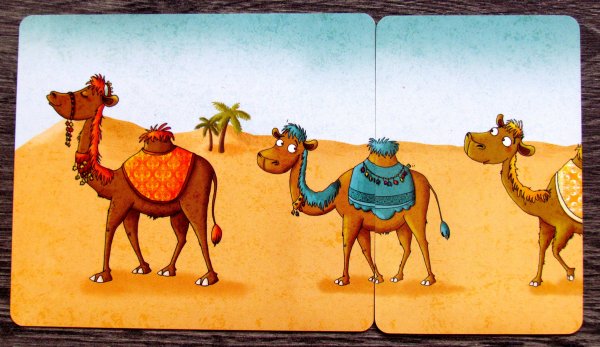 According to rules, it is clear, that cards will have a tough time in this game. Therefore we are also certainly pleased to report, that our cards are still in good shape and do not suffer from this hectic game. At least in first fifteen parts we have played. But if you are playing with children or have more emotional rivals, you should certainly wrap them. This time it will definitely come in handy, eventually.

Individual rounds are really quick and full of crazy pace. Furious browsing through all the cards and effort to find images suit it the best. In a hurry, you can easily make a mistake without realizing it. This concerns mainly uniqueness of colors in a caravan. While there is enough of them, but when you compose a long caravan, or simply are in a hurry, you can make a mistake or overlook something. But back to the time, which allows you to complete the game in fifteen minutes.

Camels can entertain players of all ages. All without distinction will enjoy fantastic illustrations, but no less great news is also a crazy shuffling, that will not give you a moment to breathe. And yet this crazy tabbed browsing might not fit all. Lovers of quiet playing will definitely not appreciate this game. For everyone else, Ohne Haufen, Dumm gelaufen represents a truly valuable companion.

- pace may discourage someone

Ohne Haufen, Dumm gelaufen is not just children game. Although the various rules allow to complete caravan even to little ones, camels will equally amuse their parents or older siblings. The game is fast, friendly and full of suspense. To win, it is necessary to be able to quickly flip cards and find the right pictures. Rules are simple and work seamlessly in all the numbers of players. If you do not mind chaos, then you can definitely appreciate this card game. Ohne haufen, dumm gelaufen game is much faster, than the fastest sprinter camel and has its true charm.

by Dušan on 02. 02. 2018
Welcome back to the world of superheroes and seemingly all-powerful enemies. Welcome to the world created by Christopher Badell, Adam Rebottaro and Paul [...]
comments
Leave a reply