Review: Oink! – piggies do not squeak

by Dušan on 29. 02. 2016
0
previous article
Review: Automobiles – with cube propeller to victory
next article
Board Games to Convince your Friends to Play
Contents 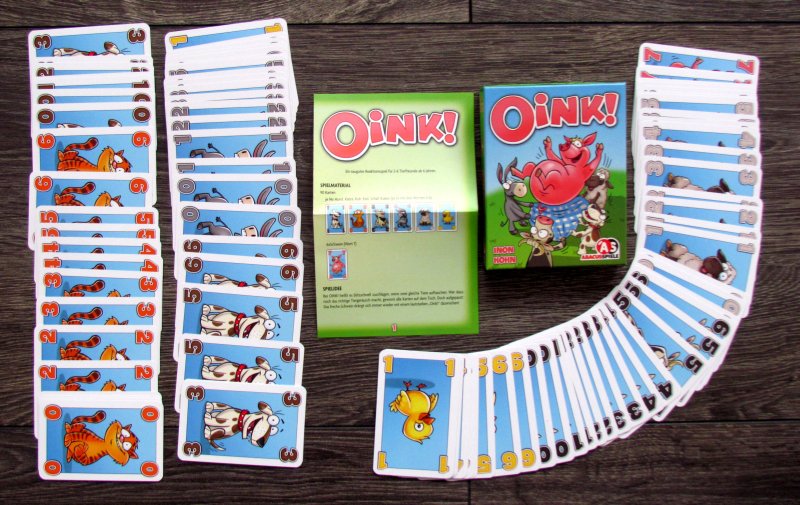 Oink, oink, squeaks little piggy shouting with joy. Other animals can finally play with it. After years of solitude, they finally became friends. What did it take? Only one donkey, who out of his sleep began to squeak instead of his traditional sound. Animals suddenly realized, that they all from time to time may be a pig and will need help from others. And in that moment, piggy suddenly gained new friends.

Name given by animal sound is then perfectly logical. Especially, if this pet is main hero of the card game called Oink!, which is just a synonym for our Czech “kvík”, if you are interested. Idea for this game began in the head of designer Inon Kohn and box filled with cards was published by Abacus Spiele with illustrations by Michael Menzel in 2014.

Small box with animals on the lid came a moment later also to our editors office. Piglet seems already happy, but it still did not win, so we will not join its gaiety yet. Instead, we examine short four-game instructions together with a total of ninety cards. On them is a total of seven animals – six types are represented fourteen times, while there are only six piglets. 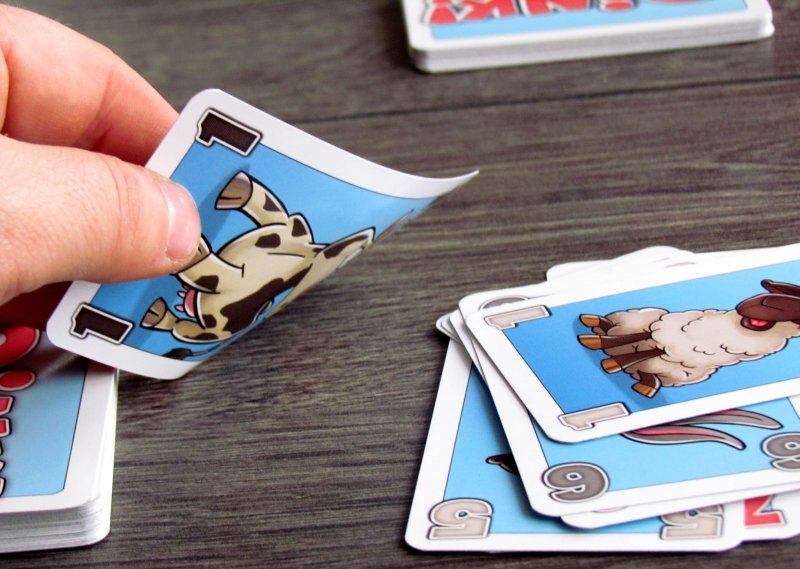 At the beginning of each match, players divided shuffled deck of cards equally among themselves. Then, they must also select a starting player, who takes top card from his pile (not knowing, what image is located there), turning it away from himself and place it in the middle of the table. Players may now respond on basis of this new image.

But perception requires identification of moment, when it is right to scream. This all happens, when two identical animals are lying on top of each other. But it is not enough to be the fastest and lay a hand on a common discard pile. On top of that, player must still make correct animal sound. Only then can he take whole pile from the middle of the table for himself. But if he made a mistake and was hasty, he has to on the contrary give up one of his accumulated cards.

But a pair of identical animals is the only moment, when players usually will not hear swine oinking. Players mimic specific pets, that just created a set. But in addition, to watch for sum of seven of two last cards is also very important. It is quite simple, because animals have printed digits from zero to six directly on them. 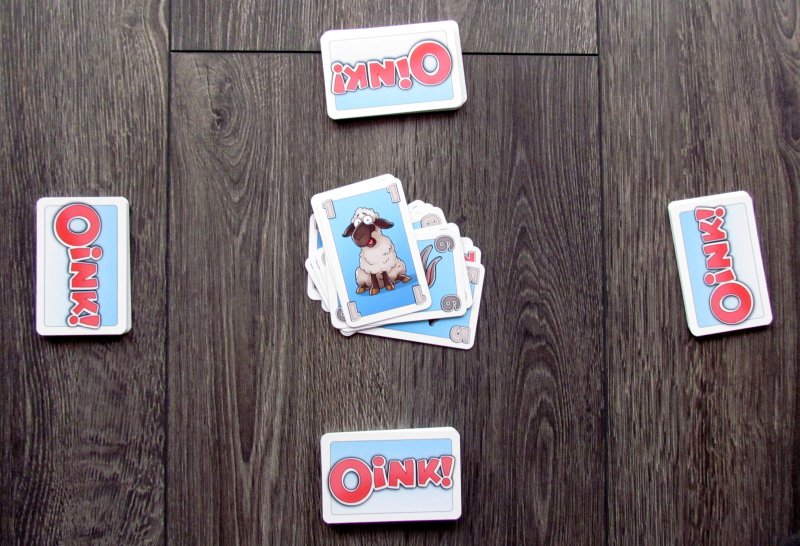 Correct response is necessary also with appearance of piglet itself. Players in that moment, as well as in case of sum of seven, must squeak and slap card pile in the middle of the table. All this as quickly as possible, because only the best gets a deck of cards for the final scoring. Captured cards are not placed back to his pile and instead make their owner happy. And can make him victorious at end the game, when drawing pile runs out. It will be the one, who has accumulated most cards during the match.

Oink! is a simple perception card game and in addition with sounds of animals, which is the entirely most probable theme, if you want to make children interested. But imitating sounds is a topic, we have played several times already in the past. And not once. Unfortunately, this fact drags our expectations down a little. 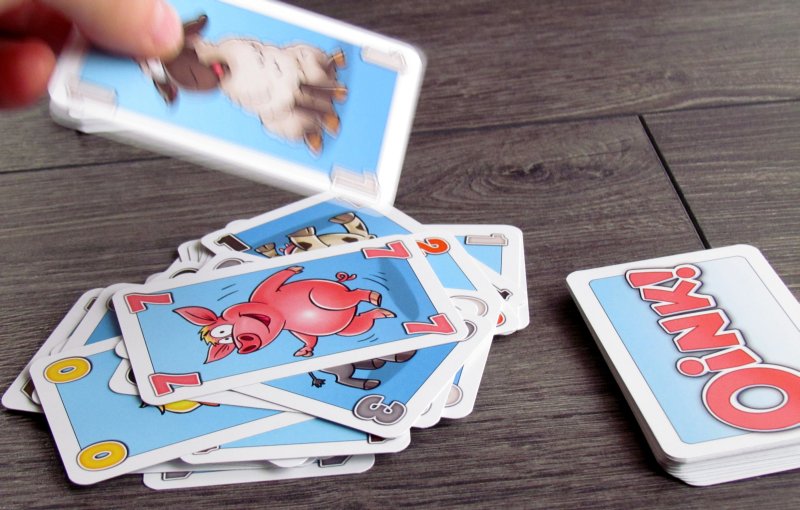 Advantage of this game is however, that it is quick. Players take turns in playing cards and must only keep track of elements, that are currently on top of the pile on the table. It is not easy to concentrate on pictures as well as sum of two last cards. And to this, you will have your head entangled by piglets. Overall, the game is quite fun, although really does not offer anything new.

Game is best with really young children from five years up. They need just that little bit of counting skills and they can have fun. And they will enjoy it, if then have not played any of the competing animal reaction (eg Joomba!). All these games are quite similar and it is only a matter of preference, which one you enjoy more. 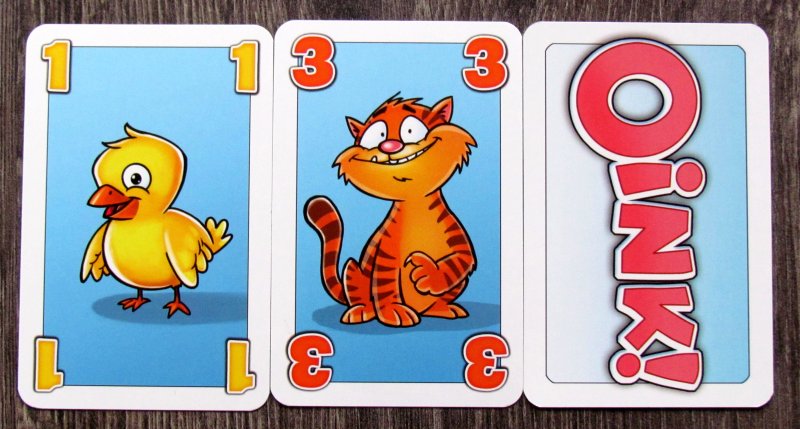 This one makes you certainly appreciate the already mentioned low time needs for one match. Even with six players, it is quick, because each participant has smaller number of cards in his starting package to play. Everything is smooth and transparent. But on the other hand, the game is not as much fun with two players as it could be, but you are still trying to beat the other player.

Oink! is a game, in which everyone plays simultaneously. Thus, player watches card and try to combine it with the available options. Game is fast, has no major flaws and will be liked especially by younger children. For this target group is this otherwise quite unoriginal card game designed. But we can not see Oink! in any other way, than as a purely average card game.

Oink! is actually nothing more, than a follow-up in line of reaction games and at the same time absolutely average game, which does not offer anything new. While playing cards, you must be from time to time faster, than the others. And at that point, you need to shout out some animal sound based on given rules. Game is over very quickly and can entertain especially in higher numbers. Oink! is riding on wave of popular party games, this time especially for children, and it is up to you, if you squeak, bark or purr on it.