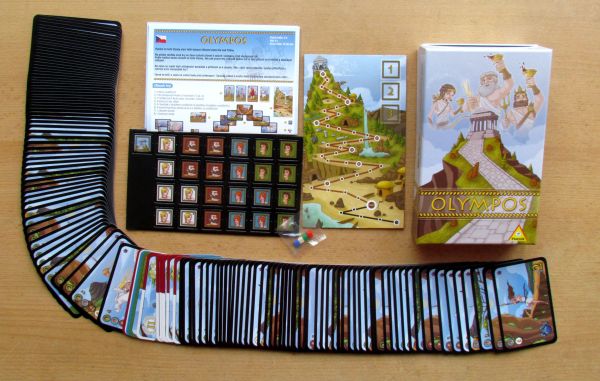 Under the Olympus is a crowd of people. The gods gave the pontiff a sign, that they are willing to accept a representative of people and divulge some of their secrets. The city was since then in argument, how to determine the right candidate. Finally, one of four people will be decided quite simply – by running.

Only one of them, who will be the first to ascend Mount Olympus, can look in the face of the gods. A shot rang out and all four opponents are on their way. Many obstacles await them: the rocks, traps and a long way, which will most of the time be tracked down by the audience below. But you, you should not just watch, you can aid them in their task and even bet on them!

OlymPeak is a card game, which was translated into Czech with a little mistake. The original edition of 2011 is released by the company ToySmart. Its authors are Sagi Ben-Yehuda and Avraham Yoffe, illustrations were added by Eran Michalovitz. Renaming the Hungarian-Czech version to Olympos brought us a little chaos, because in the same year came another Olympos game from the workshop of Philippe Keyaertse, author of Small World. Therefore, at the outset, please note that in this case, we are talking about the smaller of the two games, which is about running and based solely on playing cards. 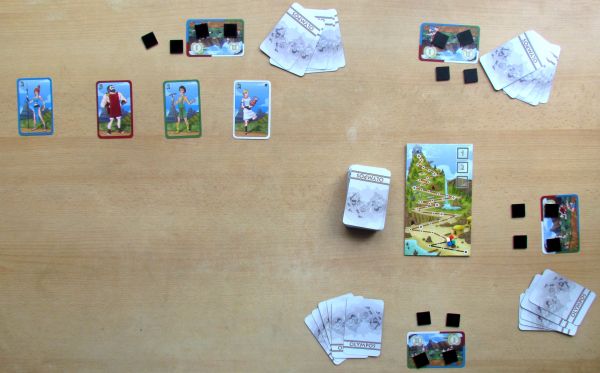 The game is hidden in the oblong box with a picture of Mount Olympus. At the top of the picture, there lies a temple and runners silhouettes are below the hill. But most important things for a player are hidden under the lid. It is a deck of cards, small game plan in the shape and size of the box and a sheet with a small puny chips. And while we are at those little tiny things, you must surely notice one bag, which seems empty at first glance. When you look closely, you could see, that it contains four tiny cubes in four colors. But do not worry, you will not have to roll them and decipher the number, because they represent runners rising on top of Mount Olympus, trying to reach the peak first.

It would seem like the main theme of your efforts lies in winning the race. But the truth is elsewhere. You just have to precisely guess the winner and help him by playing cards from your hand.

Players first take one card for bets and also set of four chips in the colors of all runners. Also they get hand of the initial six random action cards. Ultimately, they can also modify their draw once by redrawing new cards. Now it is only up to them to decide (based on the cards they got), which two of the four runners will they be cheering and how would look the finishing order. Guess one for first and one for second place, all secretly of course, by placing one token on each side of the guessing card. 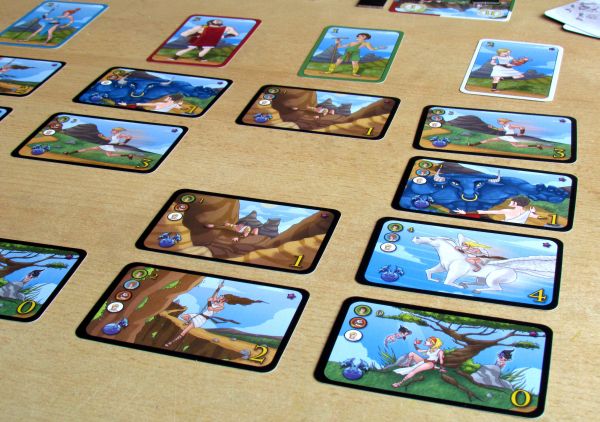 The race is held on one, two or three rounds – so it can end almost anytime. The length is decided by chance, depending on which portrait card of the four runners will you pull as the first. These four cards are placed on an empty part of the table, because it will be just below them, where players lay cards from their hand. All runners (their cube marks) start at board on place with number ten. They can run up, but also descend due to some unexpected accident (played negative cards).

Action cards in the hands of players have numbers from minus two to plus four In each round, all rivals secretly play one of them in front themselves. They choose one, which they would like to put under one of the runners. Either one they would like to help or another, who they like to hurt and make him go back. In addition to numerical values of cards, they must pay attention also to hydra picture in the lower right corner. It can have up to four heads, and hence decide the playing order. Sometimes players can come to a draw, when negative numbers usually go first.

The order is important, because the position under each of the runners, can take only one card per round. Other players have to choose between places, that remain empty. And since not all cards are suitable for all competitors (you can only play the characters shown in the circle in the upper left corner), a player may even lose his turn and throw away his card without playing its benefit. That can leave some gaps under the runners, because not all players can always play their cards. 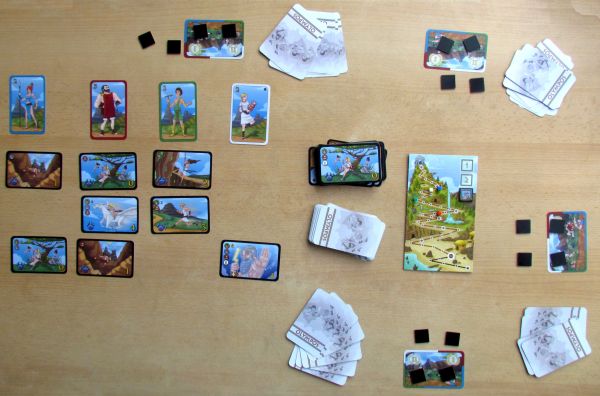 At the end of the turn, each of your opponents draws back to six cards and the game continues in the same way, until some of the racers is lined with six cards. At this point, the time limit for one round has expired and round is over. If it is not the last, you shuffle all the cards back and prepare to continue the race. But the position of your competitors and tips for the winner do not change.

From time to time, everybody gets one of the special cards, that allows them to draw one extra card, or push an opponent’s card out of its warm nest under a character. Number of these cards in the deck is just right and they provide the very much desired interaction. Otherwise the game would consist mainly of filling positions.

Olympos contains secret tips on the winner of the race. This is, how the winner is determined at the end of the game. You get points for correct tips or if your runner finished second instead of first. However, if one of your favorites stayed in the rear positions (third and fourth place), you will not get any points for him. The player with the highest total wins. 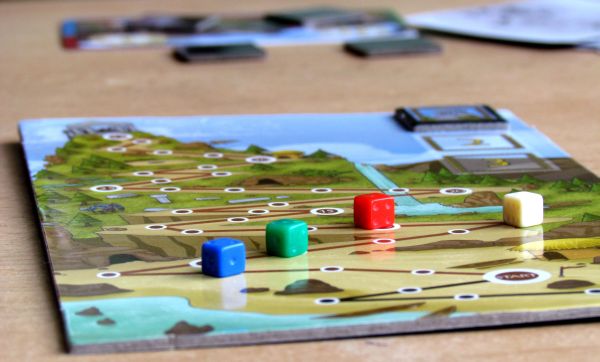 But your bets are secret only for the first few rounds. Later, it is quite clear, which colors are you interested in according to played cards. Still opponent do not knows, which one you selected for first and which for second place. Of course it is even possible, that two players put the same winning combination. In this situation, the game ends in a draw.

Despite the small game board, Olympos is in fact essentially a pure card game. Most running cards have more portraits on them and can be used to push one of more competitors according to your choice, or to block another player and spoil his mood. But you still have to pay close attention, which initiative (Hydra Head) does the card have, especially if you really want to push your favorite forward.

You play cards secretly each turn and this is where the greatest strategic risk is hidden. But the most fun comes from the secret bets, and trying to figure out, what tips have the other players. Variable number of rounds brings different results – sometimes the game ends with reaching the peak of Mount Olympus, sometimes you play the required number of cards. In either case the game does not last long and will keep you constantly focused on its events. 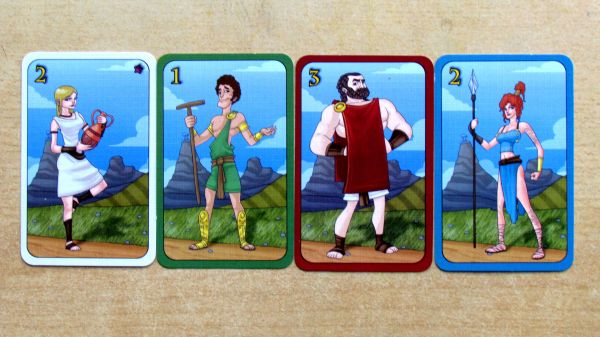 Olympos does not offer anything unique. But if you like racing and supporting your secret bets with playing of cards, you probably will like this game. However, do not expect anything more than a relaxing and enjoyable, as can card game get.

Olympos, or we should say OlymPeak, is a card racing game. You are trying to push your favorites forward and in the same time the other ones backwards. But you do not know, who races for which player, because everybody could put bets on two racers of his choice. And he can keep his fingers crossed for any of the four available characters. But only one can be first, when time runs out, sometimes even on Mount Olympus. Game is simple and uses known principles. Secret betting and playing movement cards in line under runners is interesting. Only initiative decides, which player should choose first and players with slower cards even might not get their chance to play their card. OlymPeak is interesting, simple and cheap racing card game for families, with no groundbreaking news.