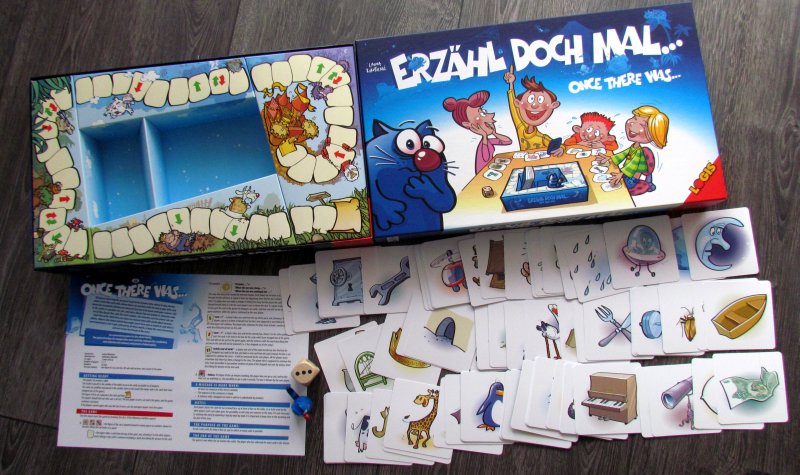 Once there was a cat. That cat had a very long tail. The tail was worthy of a monarch. She therefore decided, that she will travel to royal castle and try out her luck. She went through rigors of the forest. Even had to flee from angry cows. And finally, when she arrived in sight of the castle, she found, that she is not alone on this journey. She was not the only one with a long tail. So which cat will eventually be true successor to the throne?

And this is just one of the crazy and adventurous stories, that you can experience in board game Once there was (Erzähl doch mal) from Logis company (Hopp and Hui, MaCar). Game was conceived by Laima Kikutiene and entire work was created in Lithuania. Cards and box is illustrated by Gediminas Akelaitis.

Children’s game from this small publisher had found its way on the German and English market and that is, why one test copy arrived to us. It is a blue and on its cover is a pensive cat and picture of a family, who is visibly enjoying themselves. Box is reigned by German title and it is clear, which market is its main goal. 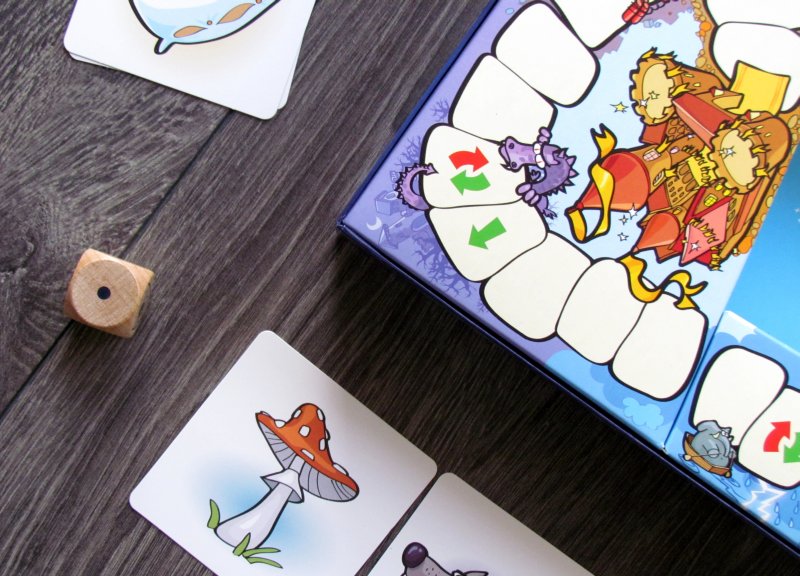 Inside, we find rules in these two main languages. Each one has one A4 page devoted. On the inside awaits players especially the path through unexplored territory all the way up to castle. It is paved with stones and firmly anchored in the bottom of the box. It orbits around the entire floor and is framed by white stones, some are even wearing symbols of red or green arrow.

Two compartments in the middle contain some of those essential components. There is one dice (with numbers one through three and one cat symbol) and a wooden figurine of cats with long tail. Players join forces to run towards the castle, but will also share ratio of ability to narrate its adventure. To do this, they will use deck of eighty cards. Each wears a single picture with some fabulous fairy tale things, whether it is a knight or a crown.

At the beginning of the game, box stands between players and cat figure is placed on first frame of its route. Deck of cards is really shuffled and placed inside the bigger compartment in the box. Dice is given to player, who last held a cat. He is starting player. 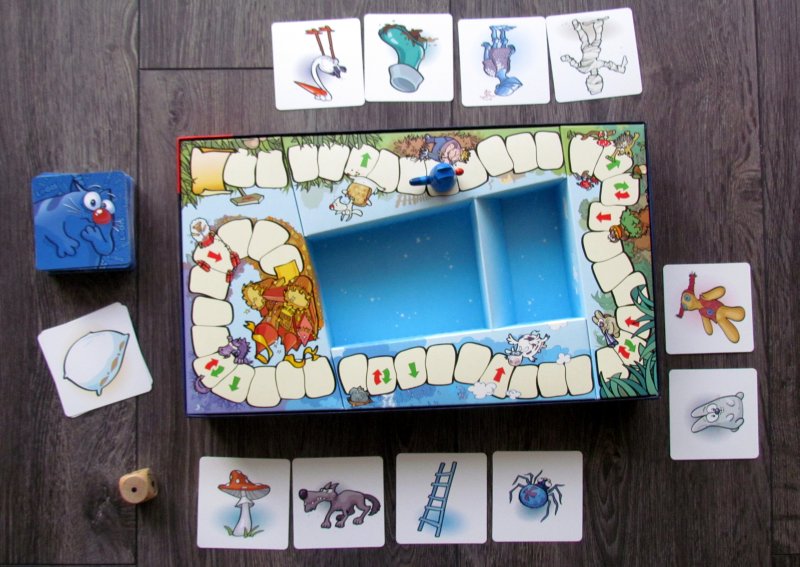 Each turn begins by rolling dice. Number of dots indicates the number of steps, that can cat figurine move forward. Conversely cat image means, that player’s turn immediately ends and another participant in the order must continue.

But it does not happen so often. Instead, mostly cat figurine ends up on the open white space and this is, where the story begins to unfold. Player simply picks up top card from the draw pile and creates sentence for common story, based on subject in the picture. As a reward, he takes that card and places it in front of him.

Next player in line will have a similar task. His sentence must build on the previous one and besides saying it separately, player must repeat whole tale from the beginning. He should not make any fundamental error (imprecision in words not essential) or forget the whole story and finish whole development of events with thing shown on the drawn card. 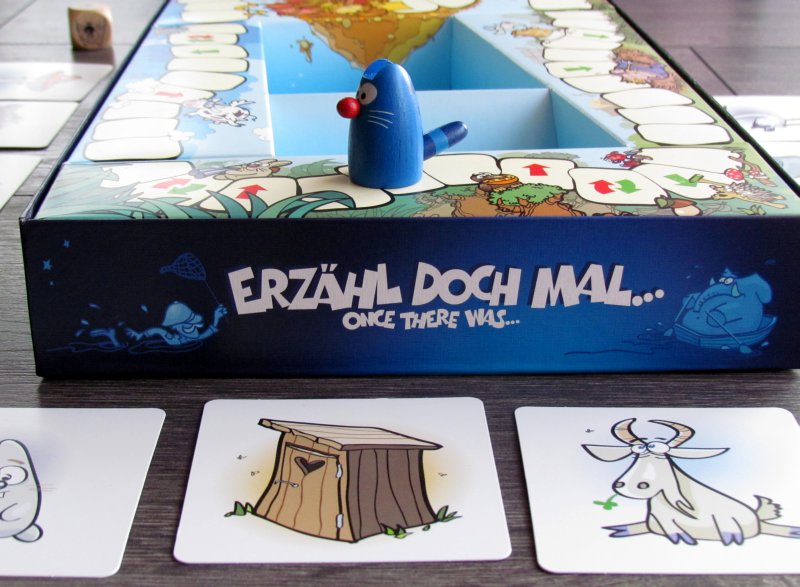 Players collect cards in front of him as a reminder of the whole story and help for telling it. But there are situations, where some parts may change. Until a player enters space with arrows with the cat. While green means only picking up additional card to the story, red forces player to return one card and throw it into the smaller hole in box. And others must be very careful, because card not only leaves possession of the player, but also sentence, that binds to that subject is left out of the story.

There is also a double arrow of confusion. Player again discards any card from his collection and puts a new one in ints place. But the same is true for a fairy tale – instead of the old phrase must be used a new one, that can completely change the development of adventure (it can even change, how the story evolves, making some important characters disappear). All participants take turns in telling story and collecting cards, until a cat reaches the castle. Now, each player counts his cards and winner is the one, who got most of them.

Once there was is a box full of stories. Endless imagination means, that even with repeated matches, you will not be bored. Although the pictures may come back, they will arrive in different combinations and players will invent an entirely different story. Sometimes believable, sometimes totally crazy. Its quality depends very much on the first few cards and ability of players, who draw them. 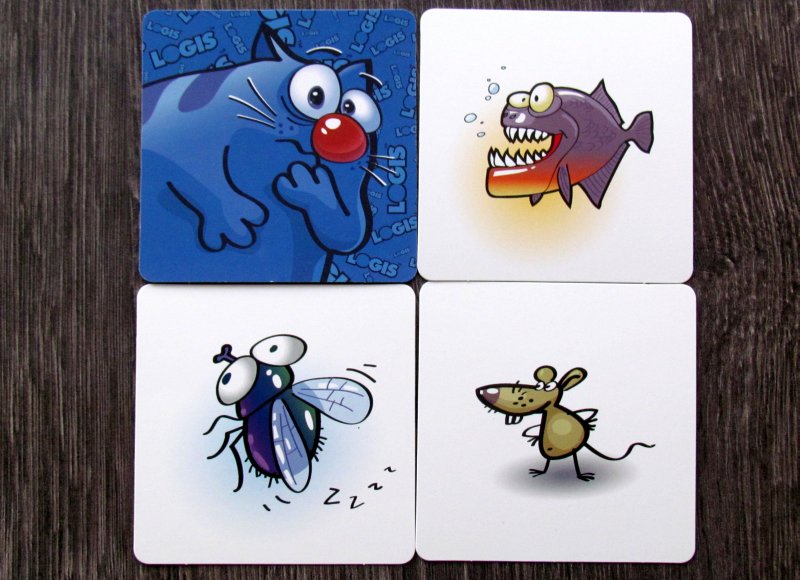 Game will initially seem really innocent and simple. But as the match moves forward, it is placing ever greater demands on the memory of all those involved. Even in the ideal case of all threes on dice, final tale will have at least fifteen sentences. And usually, it will be much longer, because lower numbers are rolled really likely.

Part of the success is beyond influence on players. If someone loses leader position, because he stopson space with a red arrow, he simply has no chance to defend. And loses card. But noone has a chance to rest, because this changes the story and by making a mistake, player will not receive card as reward.

Once there was is a game about attention, vocabulary and imagination. As such, it is absolutely perfect for families with children, but surprisingly also adult players may be entertained with it. Inventing tales is loved by all. And with more people involved, it becomes really fun, especially when you have to constantly repeat the whole story. This means, that before end of the game, all experience the adventure really well. 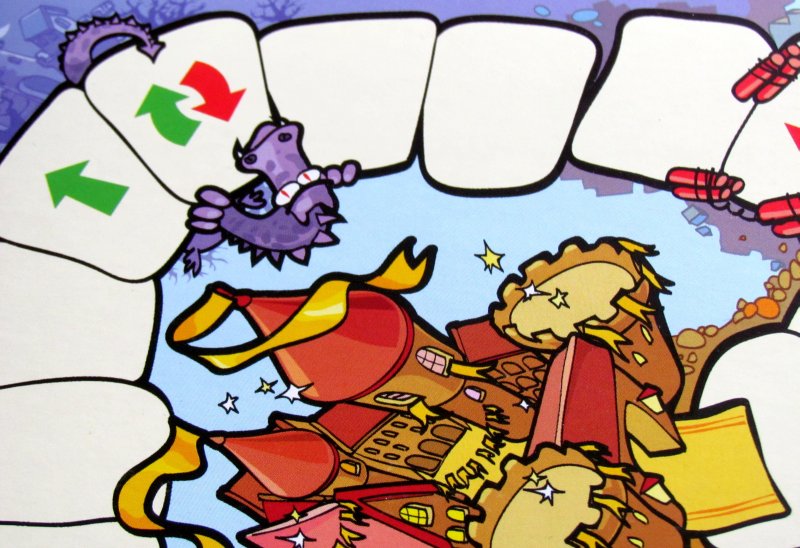 Much also depends on the ability of the participating competitors. If they sabotage the story or invent nonsense, play will not run so well. For these cases, it is not wrong to introduce a rule about control of other players and when the sentence does not fit at all, player has to repair it or even immediately lose opportunity to obtain that card.

We also have to admit, that we invented the rule with re-telling the story ourselves. Rules do not count with dropping of crucial character card from the line, which forces you to change more than one sentece. This might be confusing to some players as rules do not address this at all.

As sentence gets longer, time required for one round is extending as well. Yet, one game of this family fun can fit into half an hour of your time. You can play it since two, when both are constantly involved in the story, but retelling it becomes a little boring. Sentence is quickly extended, but repetition is the mother of wisdom. In five, it is harder to keep track and attention about the story. But the game works with all counts. 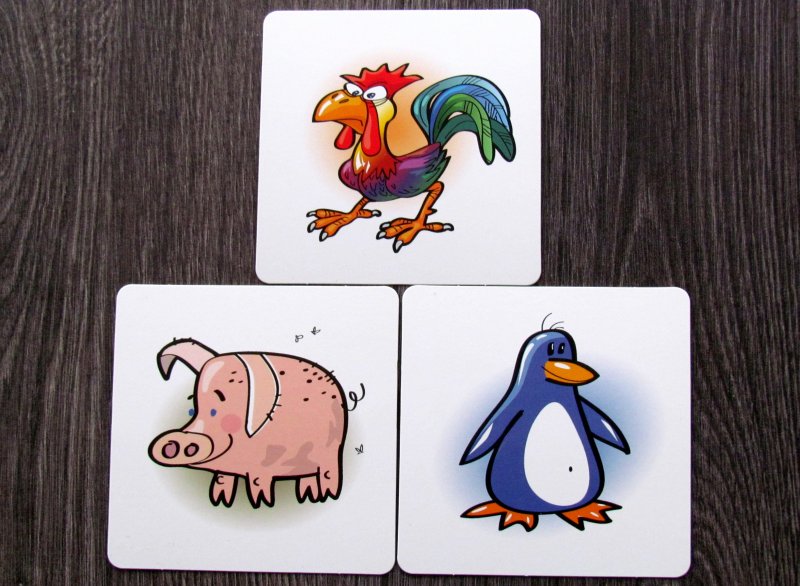 Once there was is a fabulous entertainment. Pleasantly cartoon treatment is perfect for adventurous storytelling, which is waiting for players every time. Stories are always different and players are creating their own, which is awesome as they are cooperating, while competing at the same time. Something, you could not do with Story Cubes, for example. Once there was is beautiful fairytale game for every family.

- card disappearance might change the story (rulebook does not address this)

by Dušan on 15. 05. 2015
No city will be here forever. Yet people are always trying to defend it, because this is their home. Kingdom, where they were born and want to spend their [...]