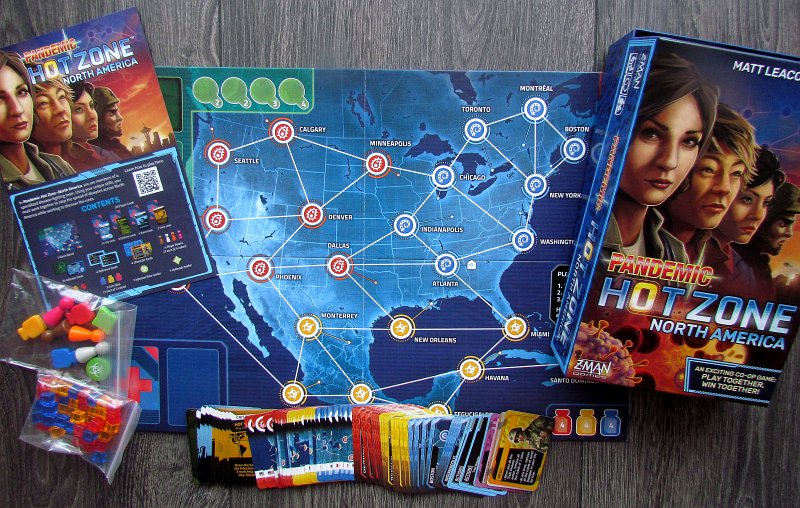 It’s not easy. Every phonering, every shout outside. Everything can be a sign, that we will have to go to work, regardless of our own safety. We must save lives in the face of the viruses, that everyone fears. We do not hesitate, we take samples and we are constantly looking for ways to cure insidious diseases.

A new game from the Pandemic series invites us into the whirl of viruses. The novelty is called Pandemic: Hot Zone, but it adds a subtitle focusing on one specific continent: North America. Under the game is signed Matt Leacock (as usual), the graphics were taken care of by Dan Gerlach and Samuel R. Shimota. The game was released in 2020 by Z-Man Games and distributed by Esdevium Games.

The game is hidden in a small box, but as is well known, viruses do not have the greatest need for living space. On the lid, we see four heroes, who will fight insidious viruses. Inside, a folding map of the United States awaits players with a number of cities divided into polka dots into three regional colors. The player places the board in the middle of the table and places a set of medicine tokens, but also disease cubes. They place indicators of the infection rate as well as an outbreak counter on the scale. 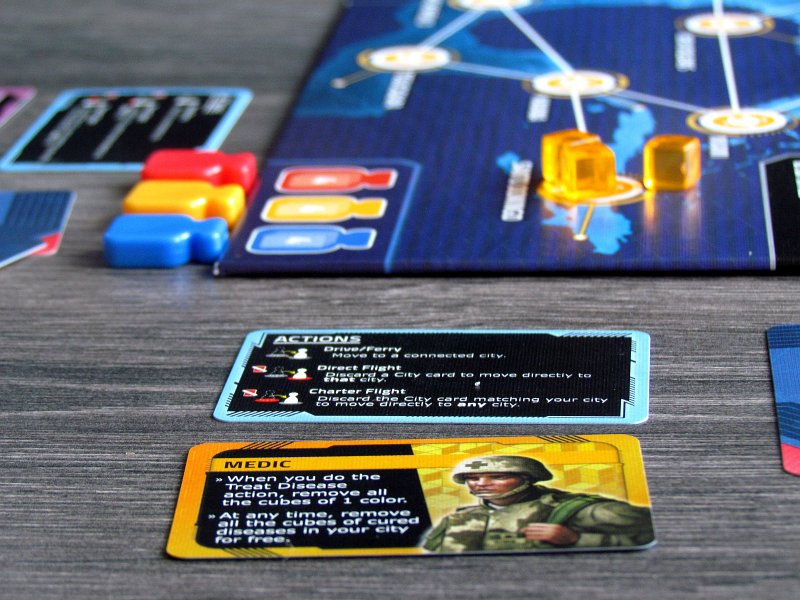 Individual players choose (or get at random) one character with a specific profession and also special skills. They all start with their figurines of the chosen color in Atlanta, home to the Center for Disease Control (CDC). Participants will also receive two cards from a shuffled deck of cities. He then distributes the epidemic cards evenly in the pile and creates a deck. Finally, with the help of cards, the infection spreads with basic cubes of the virus and thus players find out, which cities have been attacked by diseases. So the cities get three, two and one cube, but each set has a different color. America is threatened by three different diseases that erupted together.

In his turn, the active player can always perform exactly four actions, which allow him to move around the board between cities (either regularly on the road or by air by discarding the card of the destination / starting city). They can pass cards to each other, if they meet in one city. However, they must be careful, that none of the participants exceeds the limit of six cards in their hand at any time. 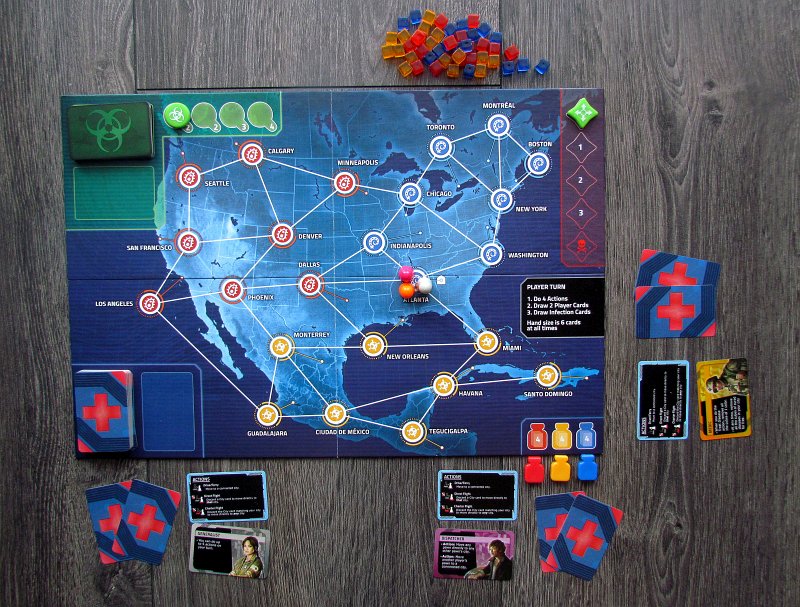 The main task of each turn and the goal of all involved players is to remove one cube of infection from the city, where the hero is located. This leads to healing, but it is only one of the steps to the overall joint team effort. To find a cure, players in Atlanta need to discard four city cards of the suit of the illness being treated.

But it will not be so easy. Once the player has made his four actions and draws two new cards from the city deck, it’s time for the infection phase. Depending on the intensity of deseases on the scale, the infection reveals two or more city cards, that get one new cube. Its color corresponds to the revealed card, and if the number of infection cubes exceeds three, then the disease spreads from the city to the neighboring ones with an outbreak. They also receive one extra cube at that moment. This can also cause a chain reaction. In addition, each such explosion shifts the scale of the infection and thus potentially the number of cards turned over in the next rounds. 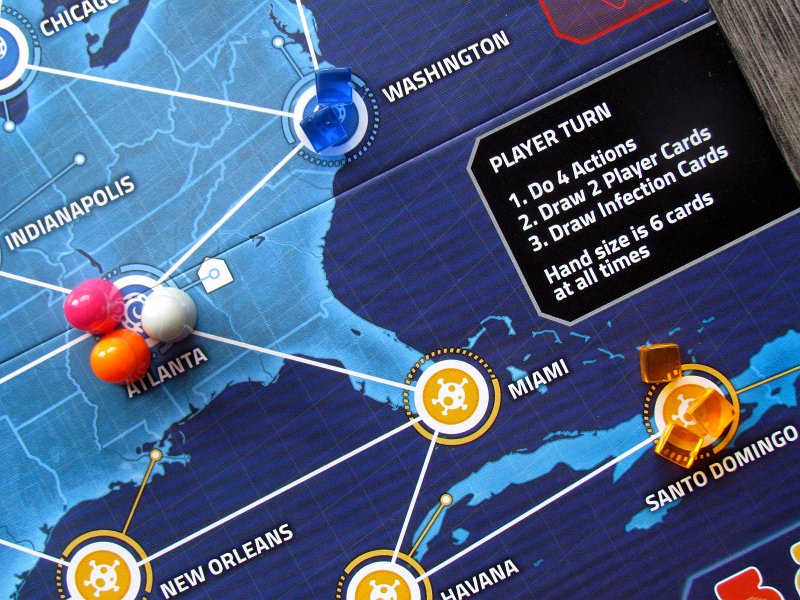 But that’s not all. You may remember, that there are several epidemics hidden among the city cards. If such a card appears in the hand of one of the participants, it means problems. From the pack of cities, players take a card from below and place three dice of infection here. In addition, they shuffle all the city cards from the discard pile and place them on the pile of all waiting cities. This makes the situation significantly more intense.

Players work together to find cure for all three diseases. Only then can the whole team win. There are more possibilities for defeat, whether it is to reach the maximum number of the spread of the disease, the depletion of the supply of city cards or the dice of the disease.

Pandemic Hot Zone North America is, at first glance, the same game as the classic Pandemic, only adding betrayal to the whole story in the form of only three diseases (compared to four). New research stations can’t be built, and all the heroes have to make do with the one starting point, which is located in Atlanta. 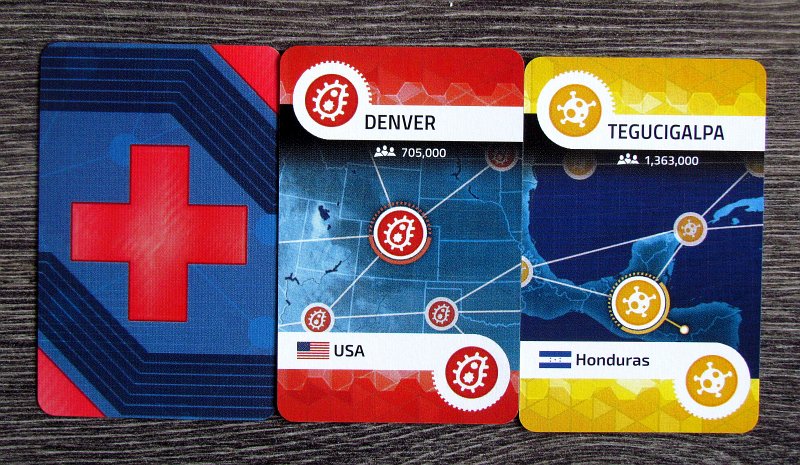 The game is even a drop faster, than the original big version and you will see the end in thirty minutes. This is because there are fewer cards in the deck (and on the map) overall. This could be perceived as good news, but the original course of Pandemic is probably more intense and fun. This time, due to the harsher ratio of cards, players are even more bound to chance.

And that also means, that you definitely should not expect simple victory. The cubes are spreading around the cities at a high pace and players will soon find themselves in a familiar situation. Not everything can be cured, it’s just about minimizing the damage. Try to save everything while collecting a set of cards and finding a cure. It looks simple. 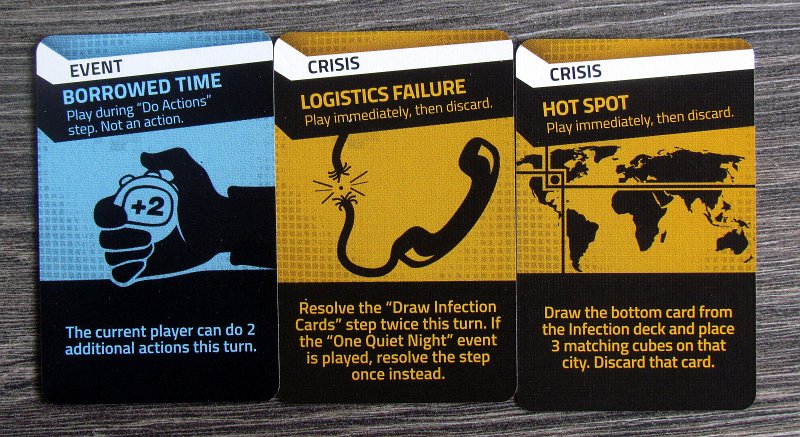 If you feel, that you are celebrating victory too often, it is time to include a crisis card in the deck. One or more are shuffled among cities in addition to epidemic cards, and their effects are described in detail on the cards. And with them, the game is really a challenge.

The game is therefore simplified mainly in terms of deck size and map size. In general, the dimensions on the table are smaller, and the cards have undergone the same miniaturization. Overall, everything has shrunk, which may suit some players and bother others. The novelty thus mostly creates a wider selection of Pandemic game, which in addition specifies thematically for North America. 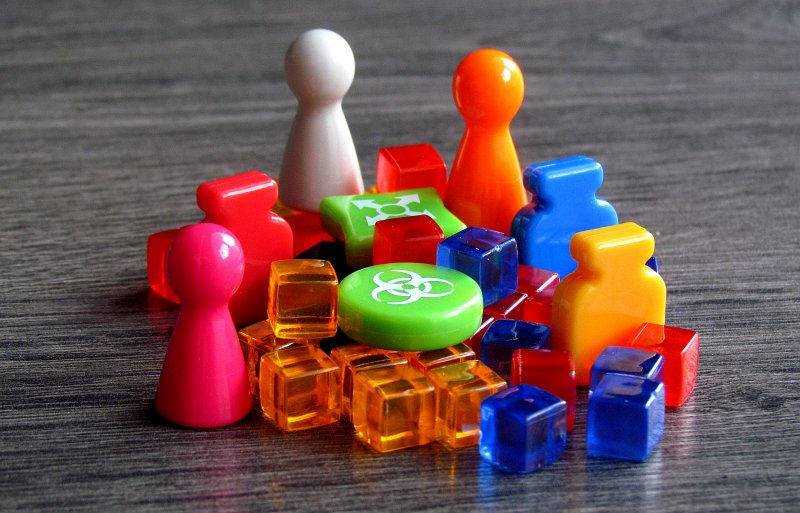 Pandemic Hot Zone North America is a game, that surprised by its release timing. Given the current situation in the world and on the Americas, sales may rebound in both directions. For us, the novelty is even faster and still high-quality entertainment, which allows you to have fun in just half an hour. At the same time, it retains the beautiful mechanism that we all enjoy, although it’s a little more about luck. Pandemic Hot Zone North America is a successful miniaturization of the popular game.

Pandemic Hot Zone North America is probably not as good a game as the full-fledged Pandemic. It's still fun, exciting and full of effort to fight the ever-expanding cubes. But the price of a faster game is less control and more luck. On the other hand, crisis cards come into the box, which make the overall challenge even more difficult. Pandemic: Hot Zone North America is for you if you want even faster cooperation.