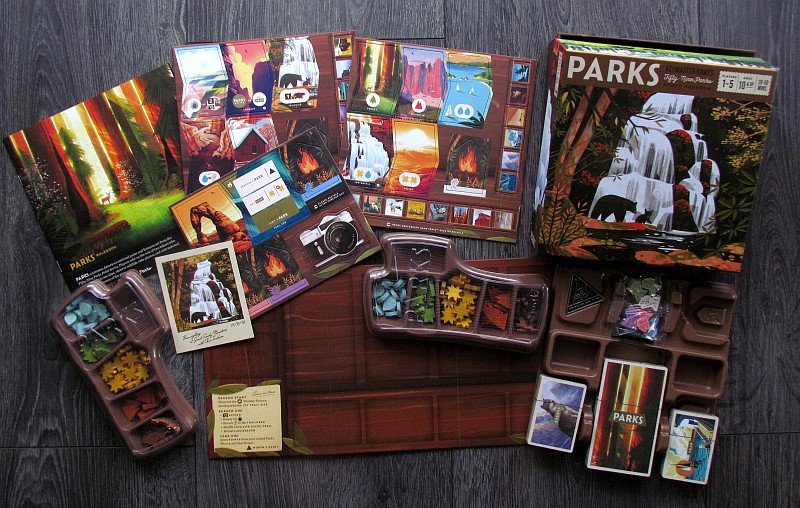 The greatest danger of traveling through the North American is said to be bears. At least everyone started telling us that, when we announced our intention to move across the continent on our own. But the truth is different. The ultimate threat are the tourists themselves, because you never know, who you will encounter on your route. But fortunately, despite all that fear, there is still plenty of time to enjoy the beautiful nature.

Henry Audubon, who created PARKS under the auspices of Keymaster Games, invites us among the huge trees right in the heart of nature. The game went through a sharp test of Kickstarter campaign and was successful thanks to illustrations of a really large team of designers. Game published in 2019 is distributed across the European continent by Esdevium Games.

The box with a typical waterfall scenery is not too large, but its interior is filled fairly. Whole organization of components gets also help by a set of Game Trayz plastic binders, in which players can find all components ready to play. The starting part of unpacking is, however, as usual the game board, which provides space for three large park cards revealed and their draw deck as well. But there is also room for three equipment cards, a canteen deck and seasons. And while the last player turns the top card, each player gets one card from the canteen deck. 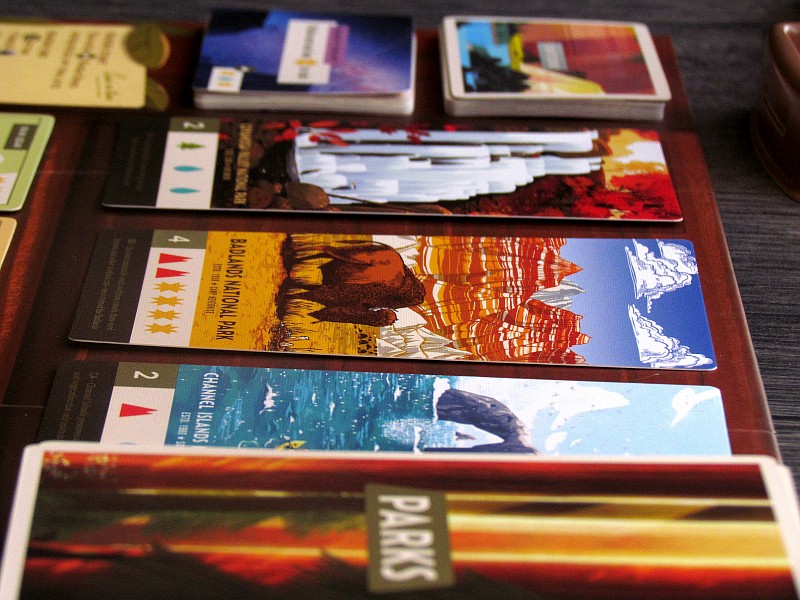 Players then create a trail from the tiles in the shape of an arrow, located under the board. Almost all of them are basic tiles for starters, but one advanced is shuffled among them. Their composition and order is random. Each participant then gets his own pair of hikers, which he places on the starting field of the trip. Players put a camp tile in front of them and set it with the lit side up. They also receive two year cards, from which they choose one.

The games are divided into four seasons, each of which takes exactly one whole journey from left to right. The season card provides not only a specific rule, but above all it indicates the weather, that will reign each day. Players will place sun and rain tokens according to the prescribed pattern.

Individual participants of the game move with their pieces gradually to the right, and can move any number of tiles to the right. As part of his turn, the player always chooses one of his pawns to move. Tourist can stop on the space only, if it is completely free. Otherwise, the site can only be accessed using a campfire token, that needs to be turned and cannot be reused for the remainder of the round. 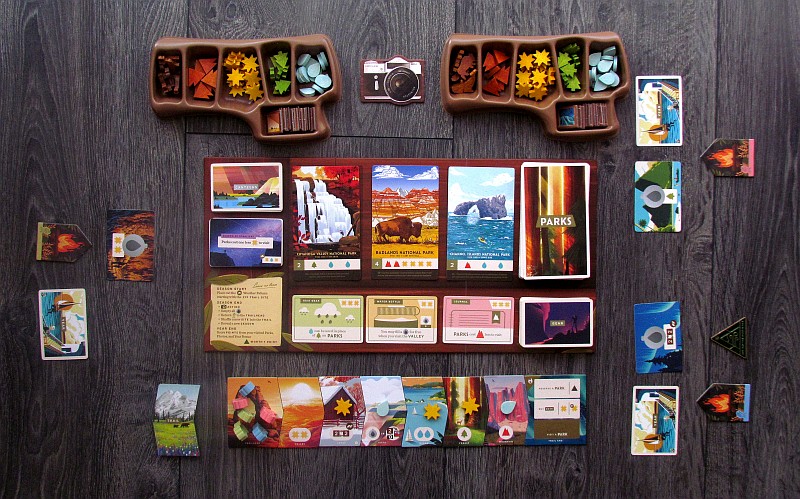 Not only do the heroes take any weather tokens, that lie on the space they stopped on, but they also instantly take advantage of the location action. They can get not only sun or water, but also trees, mountains, new canteen card (water can be stored here to get more sunshine) or equipment. On the advanced pieces, there are a bit different options and players can change their tokens for watching animales or visiting some of the parks.

On their way, heroes can take photos of their surroundings and get photo tiles for it. They are mainly worth at the end of the game. But there is still enough time, because first, tourists have to arrive at the destination of their route and their owners place the figurine on one of the possible locations on the finish tile. This gives them a chance to buy equipment, book a spot in the park, or visit it directly. For such a visit, however, it is necessary to pay the appropriate number of tokens, as determined by the park. 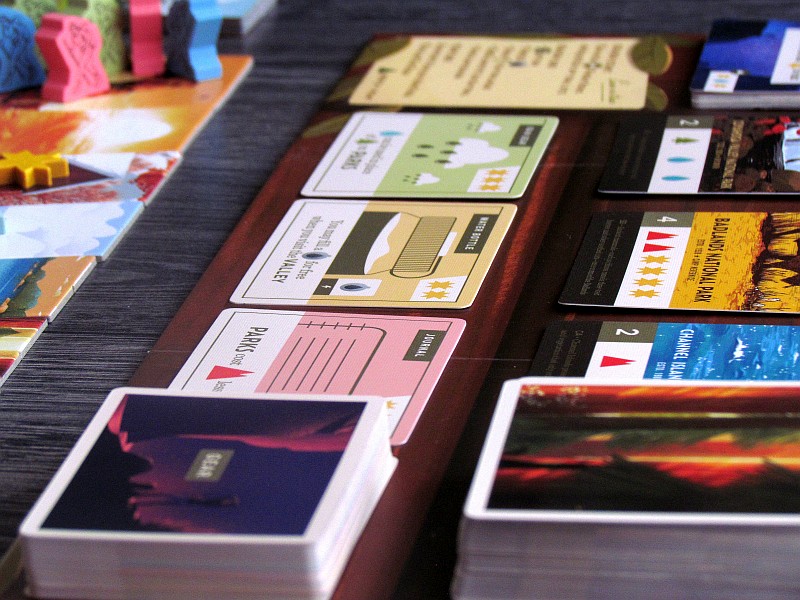 At the end of the season, players re-ignite their campfire, add more advanced locations among the tiles for the next round, and everything goes on to the next round. After playing the fourth season, players earn points printed on photos, parks visited, and receive a special bonus for their card of the year. Whoever has the most points in the sum total becomes the best traveler.

In Parks, heroes travel from start to finish, trying to collect as many resources as possible and change them, if possible, for something more useful. The most important thing are logically visits to parks, for which the chips mentioned above are needed as currency.

The theme is perfectly chosen. Players have the clear task of walking along the route and trying to find the most appropriate resources. Only then can they (as soon as such a card appears in the game) visit one of the parks, the thing that every visitor to America is most looking forward to. And it does not matter, whether it is Archies or any of the more than fifty nature reserves. 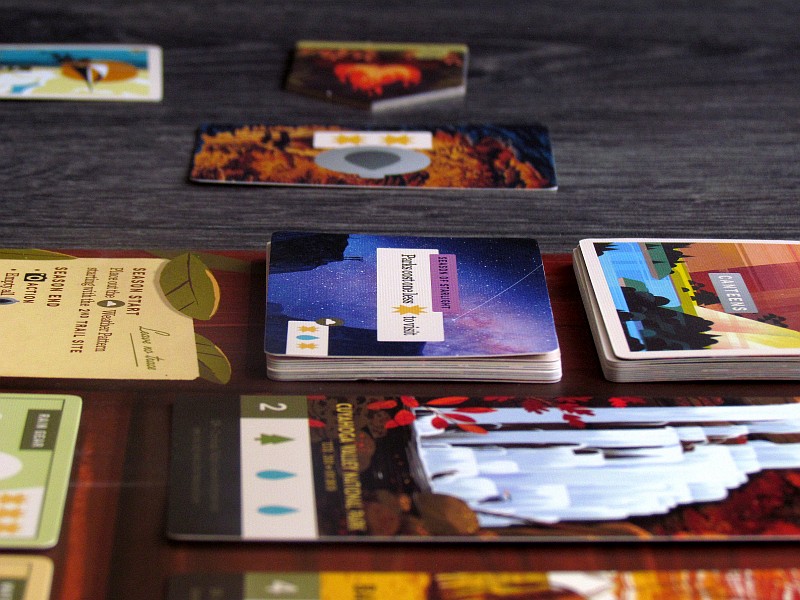 Players must cleverly use a pair of their hikers, make the right choice between them, and time usage of the campsite for the right moment. It is often the case that the heroes of the two players on the route meet and have to jump over each other, which may force them to lose some important locations.

Until then, however, players have no idea, whether the current game will be full of rivalry or not. It depends on what parks are available. Players can reserve them and this gives rise to interesting moments, where everyone tries to be faster, than their opponent. 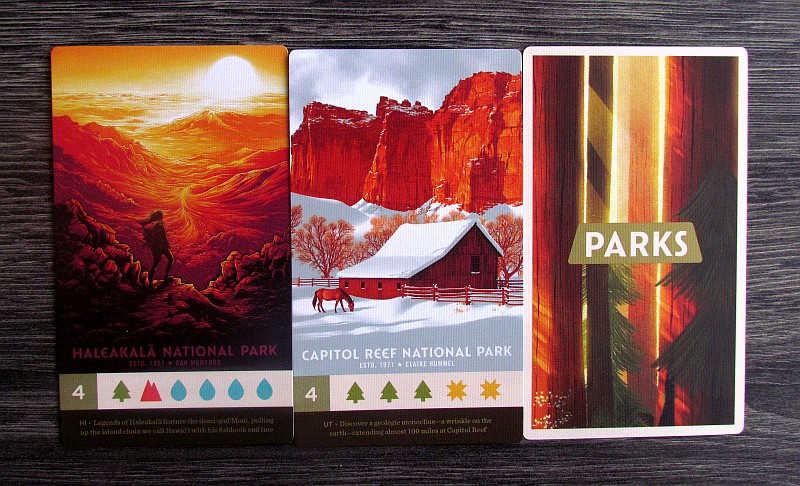 Players have quite a lot of control and options to influence their scoring chances. In each round, they can choose, which figure to move and how. But there are plenty of other things to do in turn. And that is really fascinating in this simple game. Overall, it brings a truly elegant experience and a very suitable feeling.

Everyone says so, and therefore we must mention it. The game brings a strong resemblance to the great Tokaido, but fortunately the overall impression remains slightly different. It is not so much about the relaxation and peace of mind as set by Tokaido. It is not only because of a theme, but also a course, where everything is divided into several trips. 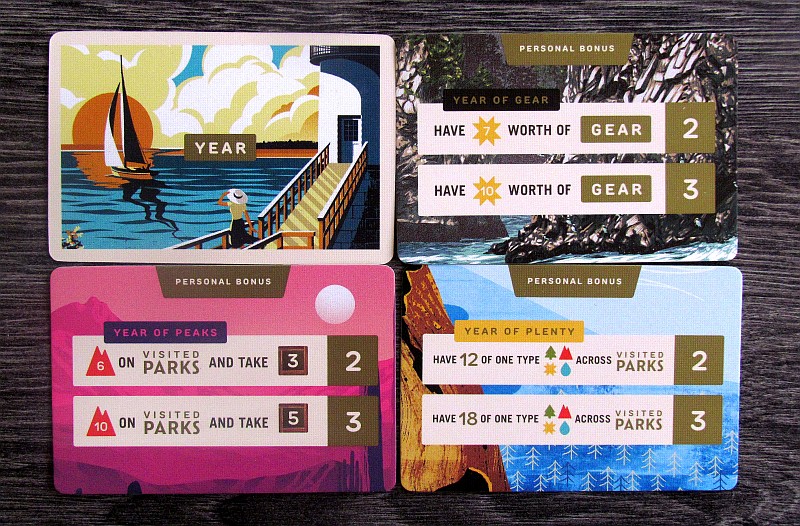 Surprisingly fun is also a game of two players. Even more interesting are trips in more participants,, when the line is fuller and the players are even more demanding. However, because the figures move forward more quickly, the number of players does not have a significant negative effect on the game time. Despite its indisputable simplicity, the game is surprisingly quite time consuming and one game is approaching an hour.

And then there is processing. This is absolutely precise. From graphics, organizers to wooden components. Everything looks great, and even here he can’t find a single problem. 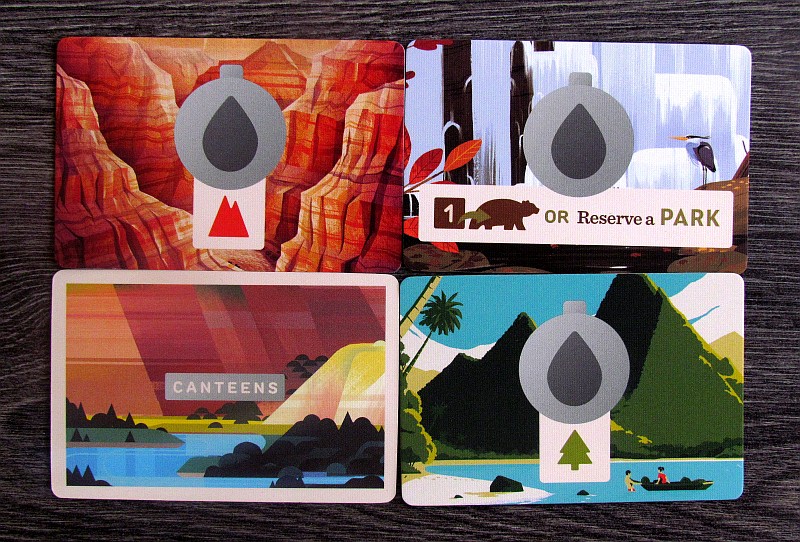 Parks is a game, that is great in all respects. There is no need to make it complicated and as such may be too simple for more demanding players. But they can also get excited for the game, if they have the right expectations. In this game, everything goes well from start to finish and when you add absolutely precise processing, you have another hit in front of you. Parks is simply one board gamer delicacy.

- more experienced players may not find, what they want here

by Dušan on 30. 03. 2020
Legend has it that dragons give only one egg per year. And so they watch it very carefully. That is why this is the moment, when all thieves come to the [...]
comments
Leave a reply