Review: Periodic – A Game of the Elements

by Dušan on 17. 10. 2019
0
previous article
Review: The Towers of Arkhanos – dice are pillars for houses
next article
Review: HEXplore It - The Forest of Adrimon
Contents 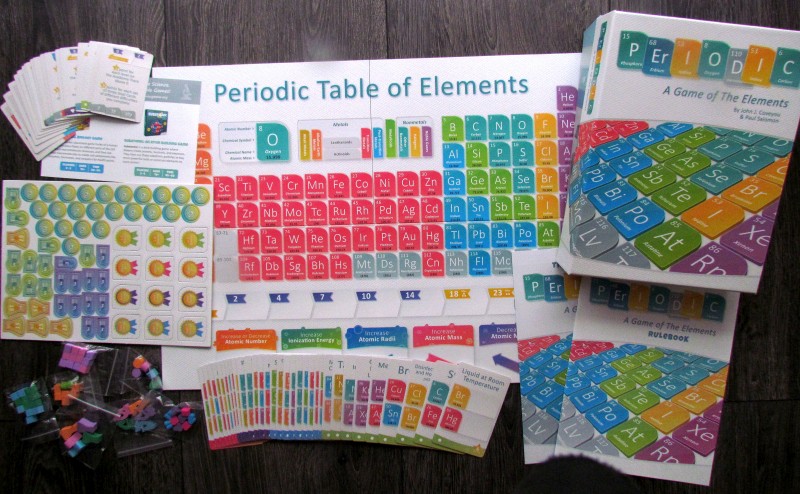 You’ve probably already heard of it. A table, whose size is never finite. It has an initial element, that is clearly given, but there can never be end to its content, just as our universe has no finish line. Periodic Table of Elements is a place, where all creatures and objects of the planet come together in one place as equals.

However, this is not true about players, who want to be winner in their research. Designer John J. Coveyou (Cytosis) has prepared something for everyone interested in such a victory. The graphics of the game was done by Tomasz Bogusz. Designer published the game with support of fans on Kickstarter. But the box goes to distribution in stores around Europe thanks to the distributor Esdevium Games.

A periodic table is waiting for players under the lid. This is probably no surprise given the picture on the box. And just this board will remain at the beginning of the game lying in the middle of the table. The plan gets company also from a pile of different mission cards, four types of tokens (dice, vials, microscopes and discs) and some cardboard pieces, together hidden in the box. 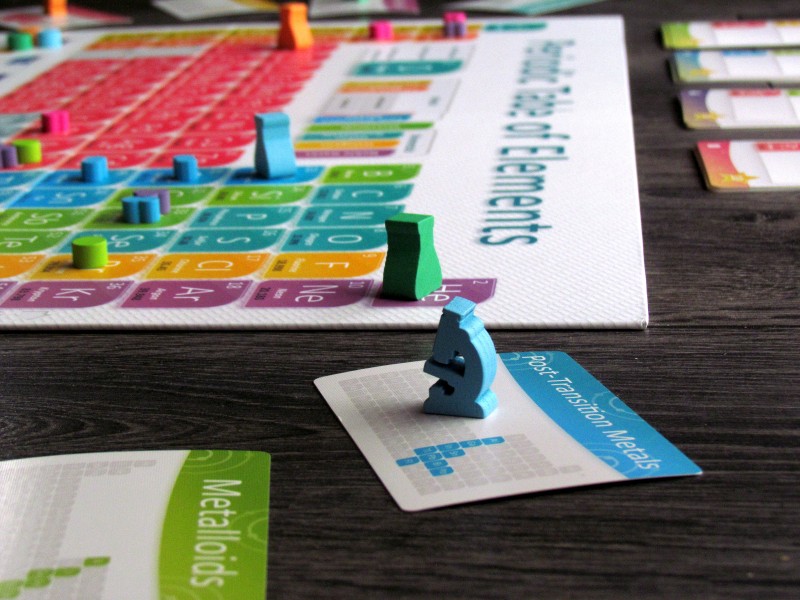 Next to the board on sides, element group cards create a circle (perhaps an elipse would be more apropriate term). There will also be four piles of goal cards, one of each will be revealed. According to its inscriptions, players mark corresponding elements on the table with the help of goal tokens. At the bottom of the board, there is space for one piece of energy for each of the trend positions.

Then players will each receive energy tokens (in number according to game order), components in their chosen color and place their disc at the beginning of the academic scale. The participants then sent their microscope figures gradually onto the element group cards and place the vial directly in the table on the element within that group with the lowest atomic number. Everyone then chooses one of three randomly dealt cards. 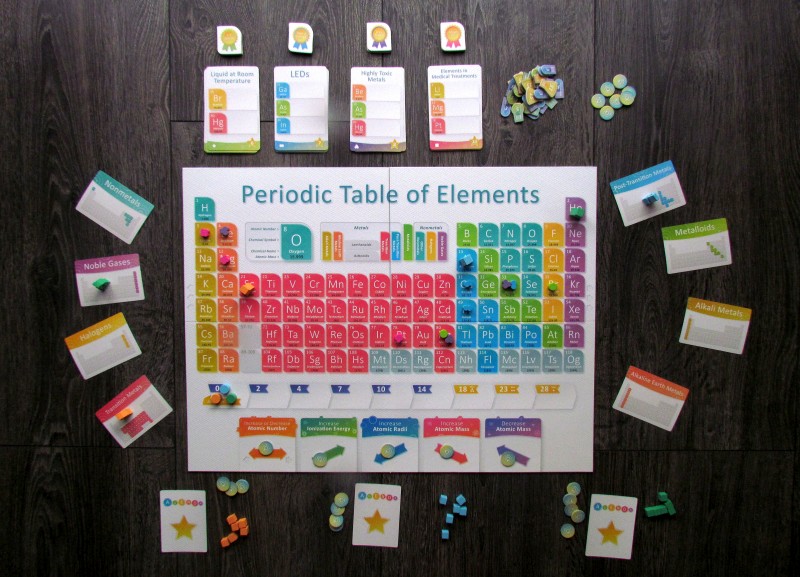 In his turn, the player will try to follow the trends of research of the elements with their vial figurine. To do this, they have to choose from a range of trends and spend a coin of energy for it. This will allow the player to move by one to five spaces in the specified direction. The player can repeat his efforts again, but at the cost of two more energies and can repeat that as many times as he wants (and has enough resources to do so). Instead of this action, he can take energy from the field, he wants to activate. In such a turn, however, he can only move the bottle once, just as instructed by this position.

But the shift is not as simple. It uses all the secrets and properties of the periodic table to move between line breaks or move through spaces in atomic numbers. All these options are well described in the rules.

The goal of the players is to research the element. To do this, he has to stop moving his pawn on goal square, thereby gaining the right to place one of his color cubes on the goal card. This is the position, that corresponds to the finished element. And there may be more cubes on the goals card as there are more rows. If one of the players has dice in all positions, he simply takes the card and the other players present there get a consolation prize in the form of laboratory point tokens. Then, player reveals a new task and the game continues. 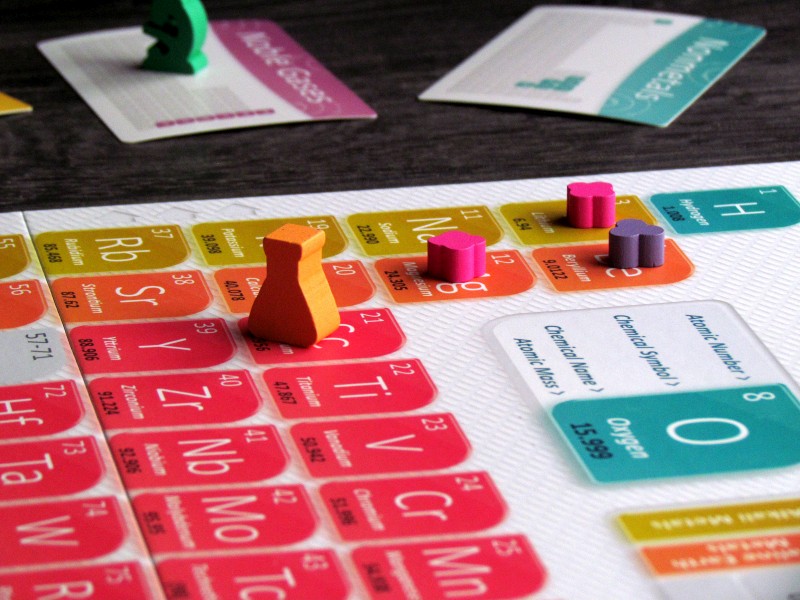 When a player completes his movement on a card from the same group as the microscope, he must move his microscope clockwise. A player’s turn can be completed by movement and the associated gain of another point on the academic achievement scale. As soon as the players are far enough on this line, the game is over. Match may end even, when one of the task decks runs out. All participants score points for scales, achievements (and accomplishments), but also from their secret agenda cards. The one with the highest score wins.

The game Periodic presents a tricky scientific problem and its main focus feature is mainly the theme. On the one hand, it is really extremely original, on the other hand, it may seem inaccessible to many players. And this is closely linked to the gameplay, which is not the best. 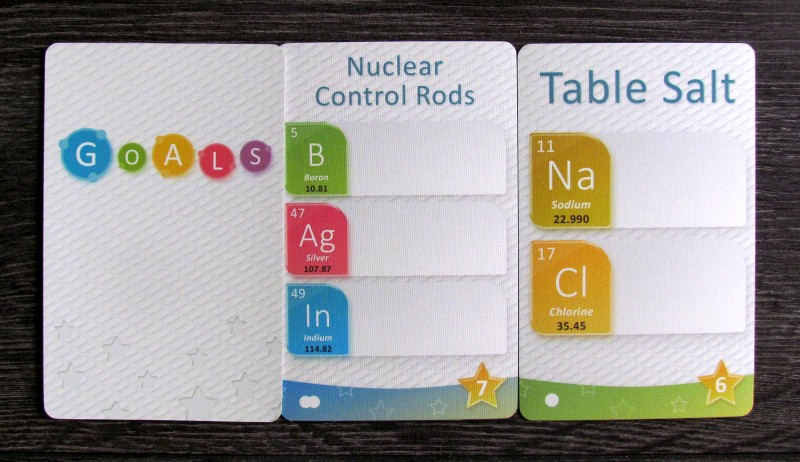 Although everything looks very scientifically, the game is mainly about running around a board, trying to occupy elements sooner than others. Even so, the game evokes enthusiasm for all players, who are interested in science and especially in chemistry. It is in the game, that they will find the greatest liking and discover the entertainment that can be hidden for others.

The big hidden ace of the author is the science behind the whole game. Above all, groups of elements are not just self-serving, but have a clear meaning. That’s why Periodic can work great as a teaching aid. 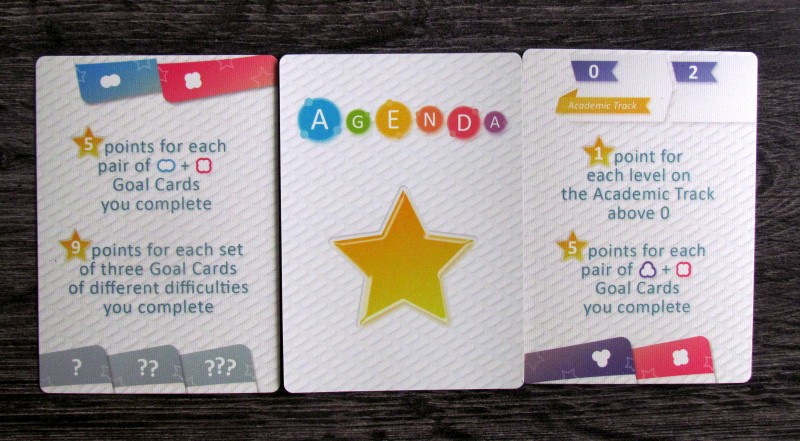 Simplicity, however, is also a great advantage, allowing players to focus only on the path to victory. While players only move their tokens on the map of the elements, they have quite interesting action options to choose from. Of course, these are represented by shift cards.

The game is solid even in two players, as it generally does not contain any interaction. Players can have fun in any number of allowed numbers, because even the game time is not significantly raised with more participants. The game usually lasts less than an hour. But the lack of interaction might be a concern to someone as well. 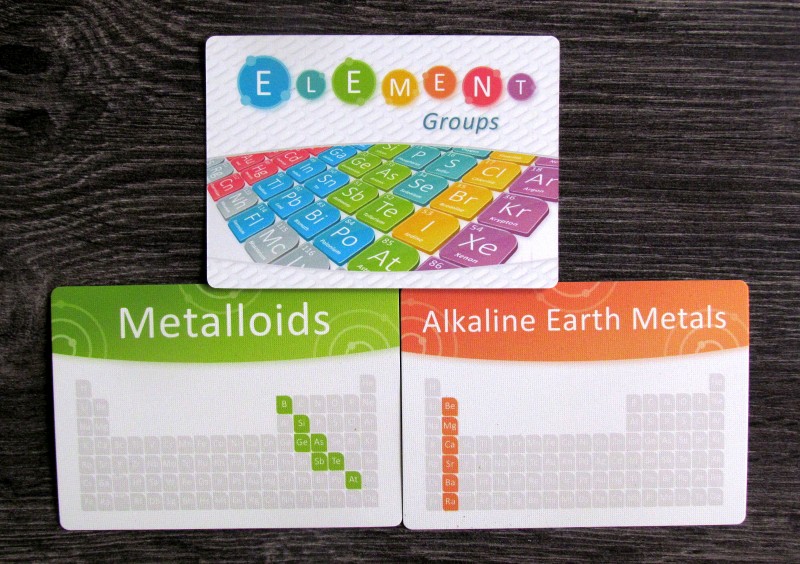 The game really looks nice. And we are talking not only wooden tokens of different shapes, but also the design and execution of the game board itself. There are a lot of cards in the game and they look really nice.

Periodic is an interesting design built around a chemical table. We all learned about it in school, so we have a relationship to it. It may not always be positive, but even so the topic is close to us. Fortunately, the game itself is interesting and quite entertaining. But it’s not for everyone. If you have a relationship to chemistry, then you should at least try Periodic.

Periodic is actually primarily a race around a board, that has the form of a periodic table of elements. But if you do not have a relationship to chemistry, then the box probably won't appeal to you. The game is very solid and offers not only simplicity, but above all an interesting movement options. Finally, it is a hunt for points, that looks very nice and entertains all the allowed numbers of participants. Periodic is a game that done everything well and has a solid quality to entertain the inner scientist inside you.

by Dušan on 27. 01. 2020
Harry Potter’s world is full of mysterious creatures. This is what Newt Scamander convinced us of, but we knew it already before that. Just think of [...]

by Dušan on 17. 01. 2020
In the vortex of time, it is not easy to order your thoughts. Days, months, and years fly all around the head, then how do I concentrate? The professor [...]
Comments
Leave a reply