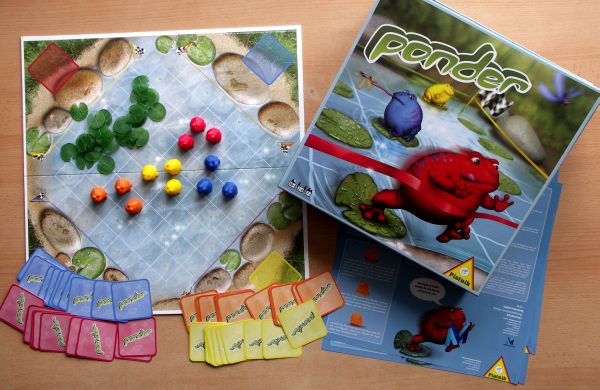 There is rush in forest. Local frogs hold an orienteering on the water lilies. Not only all of their friends came to see the race, but also many colorful birds throughout the Amazon flew down here. They are now on the trees and produce a truly impressive scene for colorful frogs. Four families will compete in running across the water lilies, but they will be blindfolded. Their teammate from the bank is going to navigate them across. We can therefore look forward to a lot of falls and crashes into the water. Exactly this is, why orienteering is so popular around here.

Now is the time to go back to something else entirely – a board game Ponder released by a Swedish company Mindtwister. This is already the second game, we have tested from this manufacturer, the first was great stick game Repello (review available only in czech). Behind creation of this game is the author Isabel Holmberg, but the illustrations was teamwork throughout the whole company.

And it also corresponds to the appearance of the game. The peek at the cover, with rounded frog ilustration making funny face gives you the impression, that the game itself must be fun. But you will feel even better, when you allow yourself a quick peek and look at what is hidden beneath. Box itself is very cleverly staggered, so that each component has its exact location. 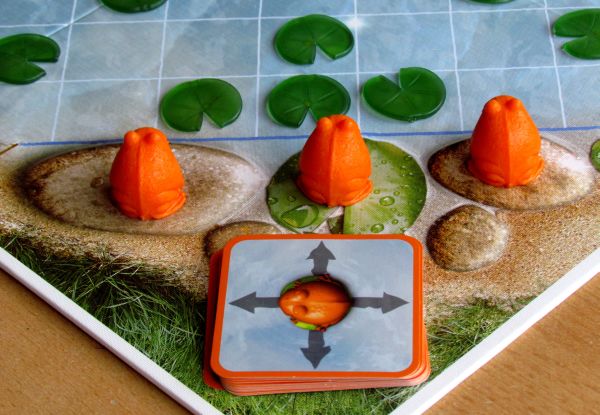 Inside you will find the folded game board, which depicts a small pond. Deliciously look both plastic parts – chewy beautiful green water lilies and in particular frog miniatures in four colors – orange, yellow, blue and red. Green was cleverly eliminated, because it would not blend in with water lilies. Fortunately, orange and red are easily distinguishable from each other in low light conditions.

Basically it would seem that the list could be finished, just put figures in their starting positions in board corners and you can start, but that’s not true. We still lack the movement cards, with which you will control your wards on their way across the pond. Of course we should not miss the rules booklet, that has the same dimension as the box, but is written on a single double-sided sheet. The instructions are clear and mean, that Ponder will not be a tricky game.

First thing to do, when preparing the game, is divide frogs accordin to color. Each player gets one team and bring it to his starting location. Each nest is marked with one color for a particular team and the flags around the line with another color – this is the finish line for one of your opponents. It suggests also your task – to lead all your frogs to the other side of the pond to the finish line and be there first. 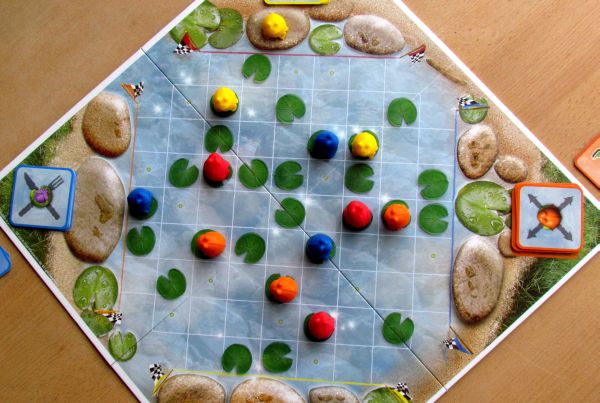 Each of the players will put deck of cards in their color square. These card will determine the direction the frog can move in the given round. These cards are shuffled and put face up it in place, which is set aside for them on the board. Now you need to prepare the very surface of the pond for the race. You will spread water lilies to their inital positions – the boxes with green dots.

Before starting, players must determine, which of them, will act first. This is, when it comes to one very unusual property of Ponder – you will throw with one of your frogs as you would throw the dice. There are three possibilities for such throw – frog lands on the back (side), the belly or sit nicely in front of you. The biggest success is logically the last, so if your frog sits. That player starts the game straight away.

The first movement card is seen, so the player knows, which way he can move one of his frogs across the water lillies. These colorful frogs are in fact afraid of water and can not swim! Firstly, you may pave the way, raise one a water lily near your frog and place it anywhere on the game board. 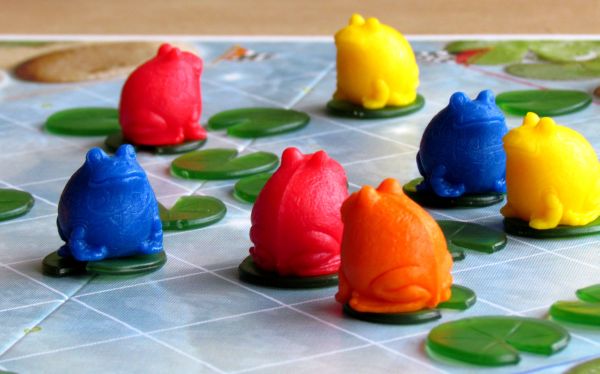 Now it comes to jumping with one of your frogs – they are similar, so it is up to you, which one you choose. You can only move it in directions, which are allowed by the top card of your deck. The choice is either move in straight lines, diagonally, or in all directions. But there are also cards, when the frog has only a little strength and can jump only one water lily forward, or is distracted by floating flies and can not move at all.

The movement of course can only be done in one direction across all water lilies. With exception of one card (mentioned earlier), that limits frog ability to move, you can jump as far as lilies or game plan allows, without changing direction.

But there is little space, so you encounter very often opponents frogs. When this happens, the place is ready for a duel. These battles are, just like at the beginning of the game, decided by throwing frog by player under attack. If he manages to land his fron on its feet, his frog withstand attack, nothing happened and the defender is rewarded with attacker recess. If the frog lands on its side when throwing, the player lost the fight, but may still be happy, because they just moves one water lily back. The worst situation for the defender is, when the frog lands on its nose – in this case it fell into the water and rescuers had to pull it to shore. Such competitor must begin his journey again from the start. 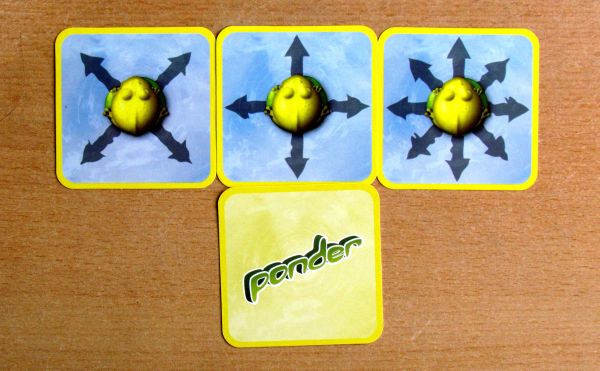 At the end of his turn, the player reveal the next card in order, so he can prepare tactis for his next turn. Thus, players take turns in moves as long as one of them succeeds in carrying all his frogs through the finish line. At that moment his team wins.

Ponder is a nice and simple game for children. It is based on a similar principle as other frog games Frog Rush and Hooop!. Also these game consist of relocation of frogs from one side to another. But this time it, you will not find any platforms or stork in games, but instead drawing cards and moving water lilies.

Chance is represented by a deck of cards, which restricts you in movement. On the other hand, most of the time you have a choice of movement between three frogs, so you usually choose one of them without problems. Moreover, if your frog remain abandoned in place with no lilies next to it, you can paddle towards the next group of water lilies. 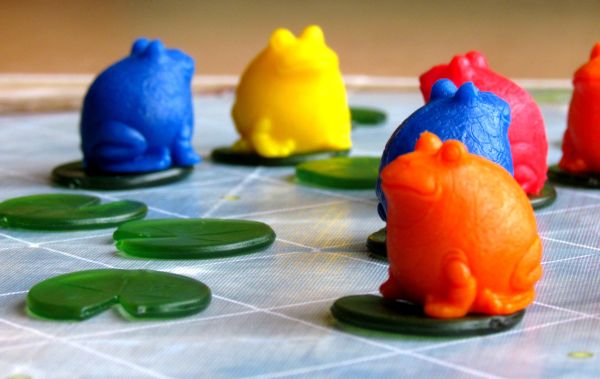 The most important in terms of strategy is moving water lilies. Frogs can help out each other, so from one frog, the water lily can be placed for second frog and prepare the way for victory. It requires also good imagination, because you have to clearly see the route through drawn by cards, which you need to lead the way and prepare with the lilies.

The game would be only about bouncing back and forth, if it was not for the frog duels. These offer you great chance to change the game and completely alter your opponents tactics. The combats are magical, because they are solved by throwing a frog. To some it may seem a bit odd, but it works nicely, though you must be prepared, that your frogs will often land on the nose.

If something really stands out on Ponder, it is its processing. Flip-flops are nicely round and cute, lilies are beautifully green and transparent. Everything is made of some rubber plastic, that is pleasant to the touch. The game itself looks really nice and the children will love it, although i tis surely not for a daily playing. 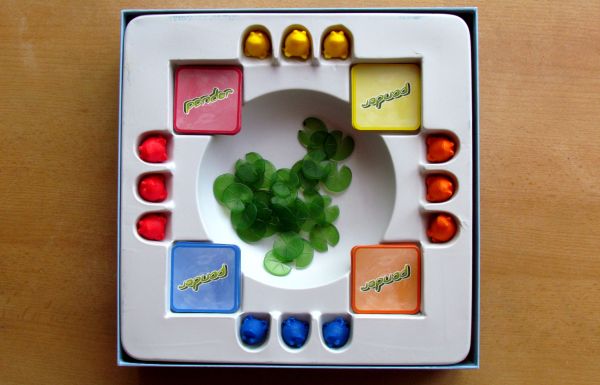 Ponder is a simple family entertainment, which combines strategy and logic with a need to have a little luck. Whether at throwing frogs or when flipping cards, you need them to come in good order. Of course, you can change the rules and play the game with one more card shown, so players can plan better in advance. In any case, frogs will not disappoint the families and brings laughter and fun to your living room.

- influence of shuffled deck
- fights are decided by frog throw

Ponder is a simple family game about frogs. It offers great processing of the components and simple fun, that is greatly influenced by chance in drawing movement cards. You can divide your instructions between three frogs, so the luck will be most significant at the game end, when you have to get your last frog across the finish line. But in the end is this game just a family fun, that requires some imagination and tacticts, and will surely get settled in many families with children.