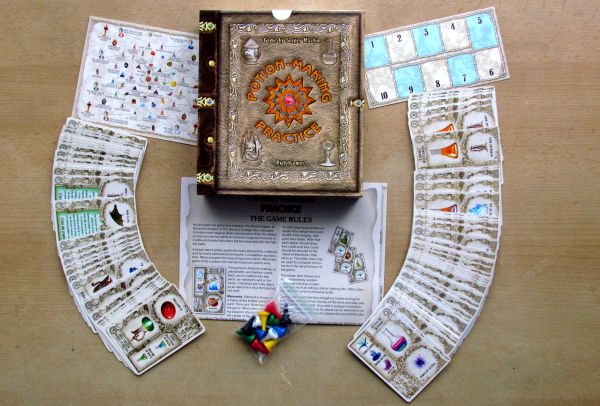 Today its time for lessons, where students put not only their books on the table, but also a big round pot. Ferda was new to School of Witchcraft and Wizardry, it was only his third day there and everything was new to him. Students performed all sorts of shenanigans in the corridors, of which he only dreamt few days ago. But since he jumped on the train to Hogwarts, everything changed.

Now he is going to Potions lesson, which is runned by the dreaded Professor Snape. And Ferda is worried, because there are some crazy and scary rumors running around school about this class. Last year, some freshmen disappeared during class, because he was not paying attention and added wrong ingredient at bad time. After a week, he appeared on a tree, with sores and must lay in the infirmary for a month. Whooo..

When he walked through door to classroom, he was trying to look as boldly as he could. But as soon as his eyes met with professor, he stumbled. All his books fell of his hand on the ground. Finally, he sat down on a bench, full of tension, waiting to see, what will happen.. 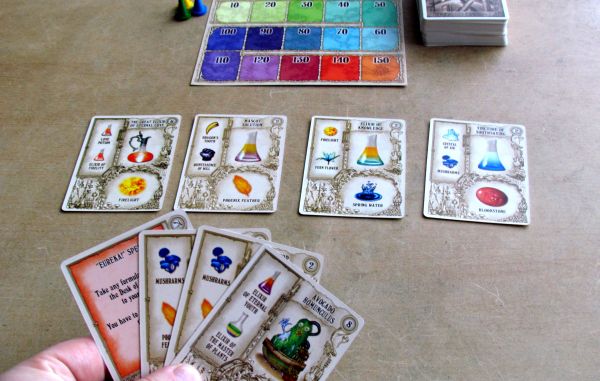 We now must let Ferda wait few moments and approach game, where we receive classes of magical potions for ourselves. It’s called Potion Making Practice and comes from workshop of Russian publishing house RightGames. This game came out already in 2005 and its author is Sergey Machin. But we received for review a newer version from 2010, especially with graphic changes. This is the version, we will describe further.

Box is trying to look like a real book of magic and it does pretty good job. You will easily know, you home some alchemical magic to learn. In its white sliding drawer, which is surrounded by brown cover, you’ll find rules written on a single A4 sheet, with example of gameplay on one A5. Then there are another two papers, serving as points counters for ones and tens.

On the other side of this paper is located a list of all elixirs, powders and drinks, which can exist in our alchemical world. Advertising papers for other games from RightGames – Evolution: Origin of Species (review) and Kingdoms of Crusaders (review) slip away and we finally get to real content of the box. 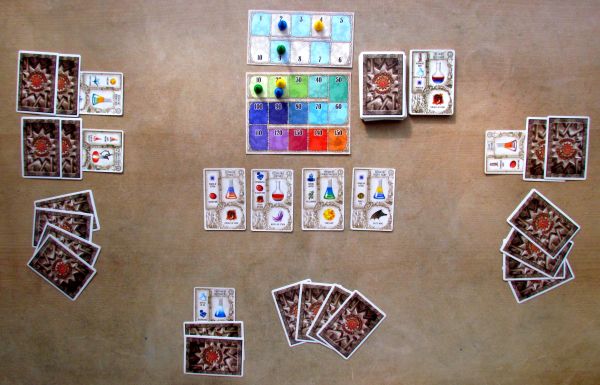 It begins simply with colored pieces in the shape of pointy hats. For each of your opponents, you will find just two of them – one for marking tens, the second ones. Remainder of components is represented by a deck of 75 cards.

Look of most of them is the same. Each card has just two parts with different actions. First one is some simple element, which can serve as the basis for your spell. The second part is a magical formula, that gives you instructions for creating an elixir. To the left, there are all the necessary ingredients, which in the right amount and order result in victory points for completing formula cards. In some cases, however, card can apart of elements be usable for one-time, immediate action. There are three such basic spells, that alchemists control and which we will discuss in detail later.

For a start, every game contains two scoring tables, players choose a color of their pieces and place pawns on top of both routes on one of them. Shuffle all the cards thoroughly and deal each players four cards into their hand. Another four will be lined up on the table with their picture up. This is called your Desk of Elements, from where individual elements can be taken and used for your magic tricks. 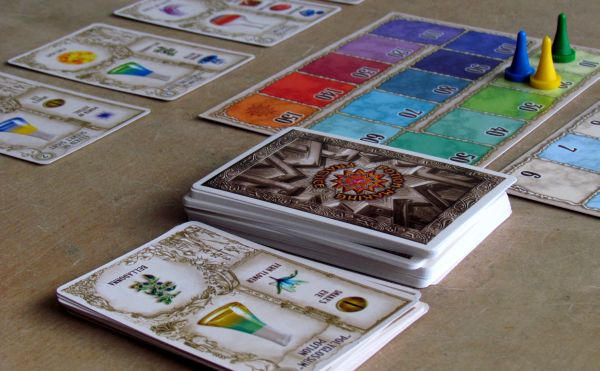 During your turn, you will have two tasks. First drawing one card from common deck and adding it to your other recipes in hand. Elements, which are held in hand, represent only unprocessed basics, which first has to find their way through preparation of a substance and be played into Desk of Elements. In contrast, recipes on cards can be used at any time directly from your hand.

Second phase of your turn is understandably playing cards. Specifically, you can play them in two ways. Basic option is to play your card to Desk of Elements. You can also get one victory point, when this element is not on the table at all. Otherwise, you add cards to pile of same substances and your turn ends immediately.

But with any card from your hand, you can also opt for second option, ie the creation of an elixir. Simply play card of recipe in front of you and take cards needed to mix it from common stock (Desk of Elements). And here is the first catch, because often elements you need are not there and you have elements first carefully prepare them. And hope, opponents do not steal you, because its in a hallway, where everyone takes, what he needs. 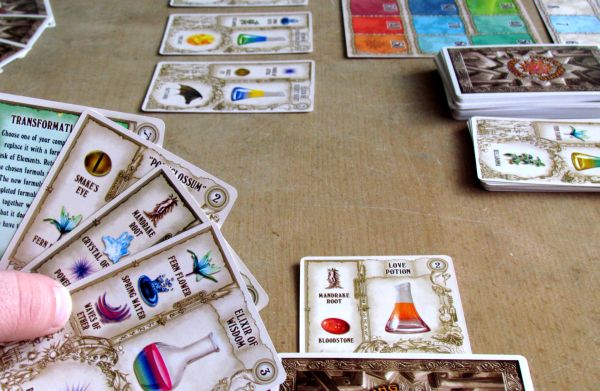 For successfully completing the magic formula, you get a reward in form of victory points. They are listed on each such card in its upper right corner. You then put the entire group of cards ahead – recipe card together with all ingredients needed. They must partially overlap, so everyone can easily see, what from you’ve concocted you elixirs.

But that’s not all. Certain advanced formula need not only basic elements reachable in the common stock, but need even a powder or elixir coming from another recipe. For this purpose, you can use the finished cards lying in front of you, but also in front of your opponents! You (and also enemy) will not regret for doing so, because victory points for them were already distributed immediately after completion. This game is changing, as it is possible to build more advanced spells as it progresses.

Your move usually ends after playing one card. The only exceptions are spells (immediate action cards), you can get from drawing piles (they cannot be in Desk of Elements). You can choose to play them into common stock as a normal ingredient or play for their special ability. This may allow you to destroy one of already completed elixirs and take one of the its components (Decomposition Spell) or change a recipe to another (Transformation Spell). 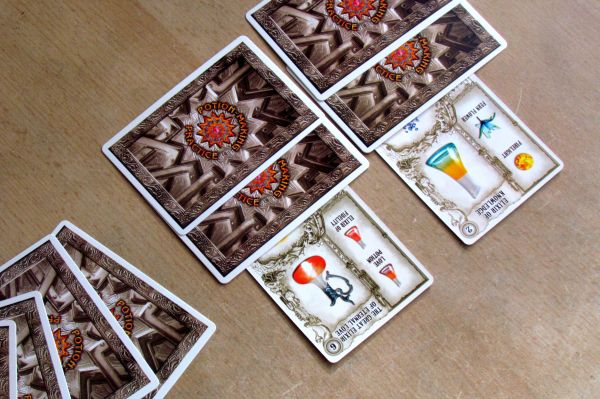 Game ends, when you empty the drawing deck. At that moment, all opponents can only check their point gain. Who came the farthest and won most points for practicing magic, is the winner of the best student and potions prize.

Potion Making: Practice is a combinatorial game, in which you are not trying to collect cards in your hand. Instead, they are most of the time in everyone’s reach. This is the cause of many situations, where you become a bad guy and steel needed a card from someone or vice versa. Preparing of position for next turn is not easy and you just have to hope, that others will gather essence and you get to use the one, you have played.

When mixing potions you can, in addition to the basic ingredients, need some already created potions. With this cards, you can also get higher profits. But this requires to know layout and numbers of different recipes in the deck. And in the first game, this is probably not very realistic. So you will have to wait to get more experienced potion maker. 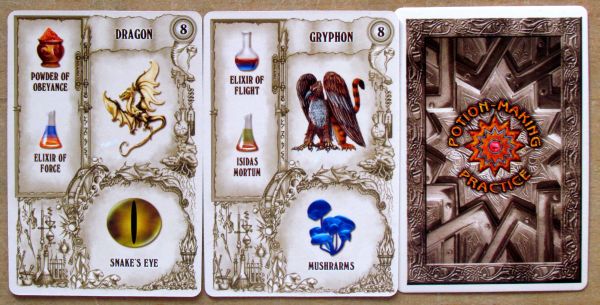 Seventy-two cards have dual purpose and it is up to you, which way will you use it. This leads to a variable gameplay, mostly independent on luck. You do not have to rely on the fact, you draw correct tasks or resources. You simply use, what suits you better, from things lying in the middle.

It is obvious, that this as the second edition of the game has corrected small bugs. The graphics are nice, although top and bottom part are not visually separated, but still they are pretty clear. You do not need to know english to read card names and while action cards are in limited numbers of species, this game is pretty language independent in the end.

Matches are fast and depend on how quickly players rotate deck and perform tasks. With faster and more experienced participants, you will get in time limit of thirty minutes, sometimes the game is stretched for fifteen minutes more. And its still fun in all available player numbers. Its more tactical in two, but you have to work a lot with your own cards, you can rely on others and their mixing skills in multiplayer.

Tactics has its place in here, but it can not lead you to completing objectives by itself. Just because that, this game is appropriate for less thoughtful players and moreover – family playing. Entertainment is relatively relaxing.

Box is quite sufficient, but because of the division in the middle, many components do not fit right in and kind of float between the bottom and a thin shell. Fortunately lid, into which is the white part inserted, has hole only on one side, so there is no risk components are lost, when you put it back.

Potion Making: Practice is undemanding game, in where you use a variety of ingredients to create magical compounds. You need particularly good use of the cards, you draw into your hand. And as you practice, you become a really good alchemist in the end..

- two scoring boards are not a good solution

Potion Making: Practice lets you to try preparation of different potions and powders with magical effects. All you have to do is gather good cards from the middle of the table and combine them according to recipes. Both those are printed on the same card, so you have to choose for yourself, how would you like to utilize them. And here lies also the hardest decision for players, because otherwise its just a simple card combination game. Fortunately, already created potions can be picked up and used as an ingredient for more advanced spells. Their value rises, but you can never be sure, that finished bottle (or item) will stay in front of you. With action cards, players can steal each others creations, decompose them to basic elements and more stuff. The only glitch in this simple game are boards for tracking victory points. There are two of them instead of usual one. Potion Making: Practice will not take your breath away neither with its gameplay nor its looks, but offers light card fun from potion academy.