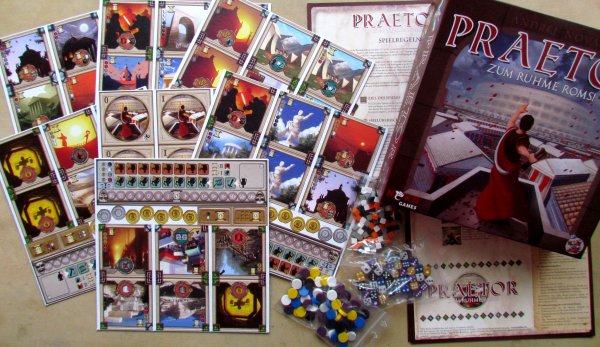 Whole Rome lays at my feet. It seems like only yesterday, but good feelings somehow disappeared. It was as if my body knew, that something had changed. I must again grasp the government firmly intomy hands. I need something solid, that will last forever. I will find capable engineers and build a wall, that will sing my glory into the distance.

Now all that remains is to get people crazy enough to make this task reality. In board game Praetor, this role falls on you as a player. After an interesting game Exodus: Proxima Centauri (review), we hear for the second time about publisher NSKN Games. Their new game was published only recently in 2014 and its author is Andrei Novac with illustrations by Agnieszka Koper, David J. Coffey and David Szilagyi.

Its cover clearly indicates, that your home will be the city of Rome. You will also stretch out your hand forward dreamily as the title character in the picture on the box. You will have 42 city pieces to take advantage of for your architect’s work. Each of them wears a price, value in points, but also a circle at the bottom. It shows special ability of that particular location. Corner areas are colored differently, so you need to be placing them correctly, matching those patterns. 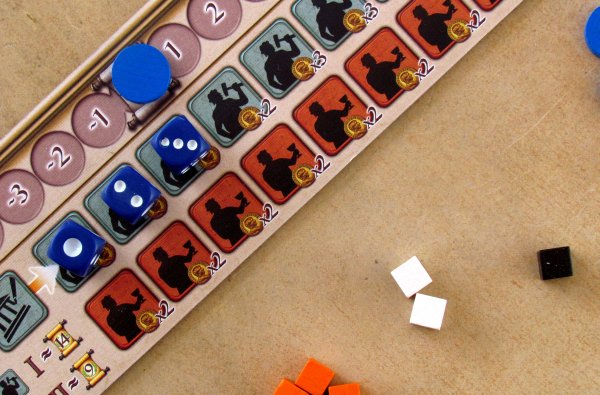 Along with parts of the city,sheets contain smaller tokens with printed favor points and requirements. Player’s own boards will be used to monitor morale of the architect, but also as accommodation for all workers, he is responsible for. Among these elongated tiles, there is lost also one common board,where players note their accumulated favor points and order.

Each building will be not raised without resources. Multicolored wooden cubes represent stone, marble, wood and weapons. Packaging includes indivisibly also money represented by small tokens. Workers are this time not made of wood, but they have a square shape of classical dice, which are made in color of players, as well as tokens.

By their distribution among players, wecan begin game setup. These players will also receive their custom board and starting quantities of raw materials. Dice are not here just for fun. Number of dots indicates, how experiencedthat worker is.Players start by getting three differently trained staff. Their counter of favor is placed on ten to common board, second one will mark player order, and you should not forget to place third one, this time on zero morale on your own board. 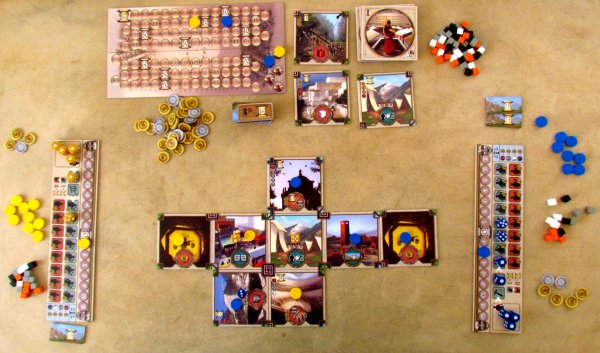 According to the number of opponents in the game, only some tiles are suitable. Therefore, players need to sort pieces out and find those matching actual game. There are always three starting locations plus several gold mines (based on players). The rest of the pieces is stacked by Roman numerals and creates a draw pile. Common offer of buildings is created next to this staack and their number is one larger, than number of participants in combat. Secondary pile is then made of shuffled walltokensand only identity of the upper is revealed.

Players take turns each round and always have a choice of one of three actions. Once they run out of human resources, they must pass and wait for others to complete all their plans. Everyone can primarily build a new building from the menu using raw materials. It must be adjacent to other, already completed location. During this action, player also has to pay one of his workers, who will remain there until end of the round. An architect marks this new building with his token, but also immediately gets favor points in the amount printed on the tile. Another bonus points can be collected from advantageous position – for each adjacent corner of the same color, builder gets one more point.

Already completed building can be activated again by sending a worker. But here comes the important limitations, because each building may use only one visitor. And this functions on that usual first-come, first-served basis. In addition to taking advantage of the location, player must also pay a fee to opponent, who own this building (has placed it). 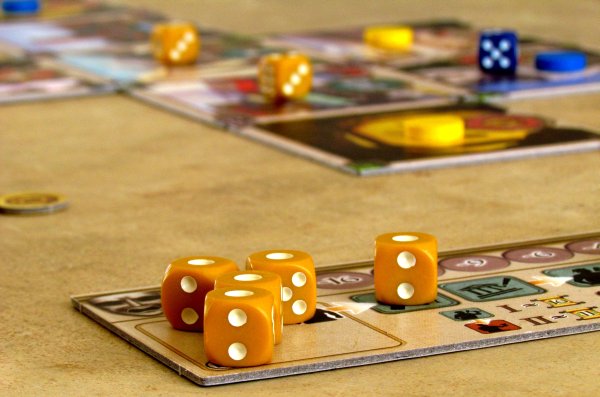 Only when each player has sent his last worker to the city or on the construction site, round ends and training begins. Each turn, players can train a new worker, who must go through a two-level instruction program. But to even start with his training, players need to use work camp, which is basic equipment of every proper roman city.

Workers, who returned from work and founded a new building or activated an existing one, gain one experience. Owner adds one to value on dice of that particular worker. But each of them wants payment in gold. If players do not have enough money, he must move morality scale one step down or even reverse on favor track in case he does not have enough morale.

And what for, then, is the experience of workers, which is indicate by dots on dice? They affect the revenue base of players, that equal to expertise of worker sent – the better worker you send, the better profits you get. But also age is bound tightly with experience, so completely trained character (level six) retires at the end of that round. Player are properly rewarded for every such pensioner by generous portion of points (according to ongoing era – Roman numerals on city tiles). 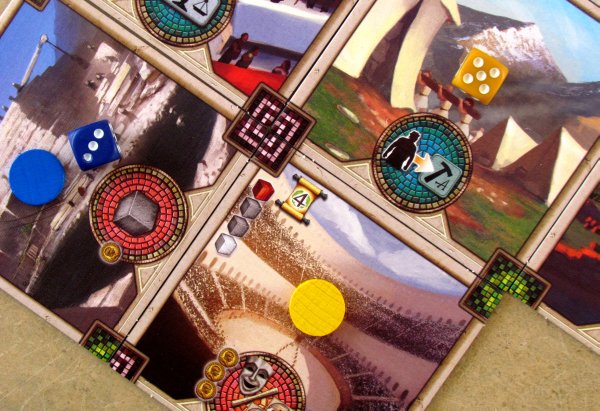 After adding buildings to offer and possibly setting aside any not bought wall tiles, it is time to continue. At the beginning of each round, new order is determined based on player’s favor. Only then can game move on with striving of all candidates for imperial favor. Game ends, when buildings or wall pile is empty. Winner is the player with the highest favor.

Praetor is a very carefully thought-out board game, that combines several popular concepts. For us it was mainly ownership of constructed buildings, which have to be rented to other players and every usage paid for into your own pocket. You certainly remember this mechanism from acclaimed Lords of Waterdeep (review) and it once again provides great entertainment in here.

So it’s actually a worker-placement? Yes, but with a great deal of resource management and caring for workers themselves, which in other similar games you do not need to worry. The overall concept of the workers, their training, experience and necessary payment works perfectly. Now your workforce management is the fundamental key, that opens door to further development and better buildings. 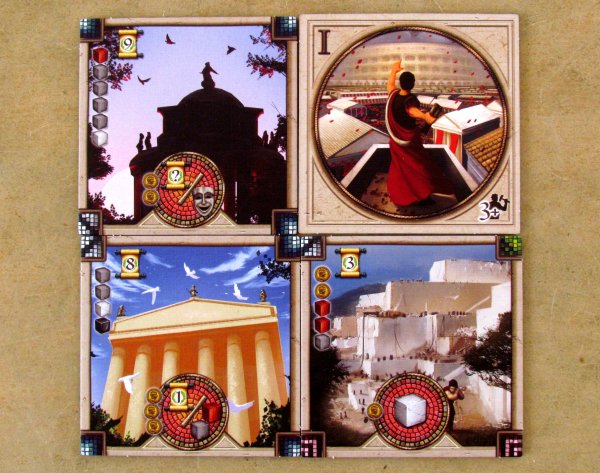 Several trips are possible for gaining favor points (ie victory points), ranging from construction of buildings and walls, through worker retirement to buildings, that provide immediate reward point. Individual buildings are well designed and balanced, so players have opportunity to receive materials from more sides. At the same time, there is absolutely ferocious restrictions of one worker on a building in a single turn.

Therefore, initial number of buildings varies according to number of players and thus also Praetor plays great in all the numbers. We really enjoyed games of two, but we had a great game even wtih five. As rivals alternate with every single activity, no turn is too long and whole plot of the game goes forward nicely. And because it is a challenging strategy game, this relates to game time being slightly over an hour.

For advanced players, game offers even asymmetric experience with B side of player boards. Each architect then puts emphasis on other things, has a smaller deficit for morale, higher fees or different rewards for worker retirement. And player must adapt to it. In addition, advanced rules add also a touch of area control and battle for most characters and walls. Because of all this, game is very pleasantly variable, although initial setup is always the same. 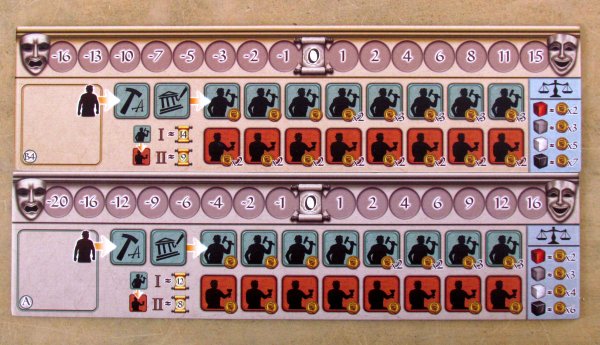 The only weak point of the game is its topic. It is a bit cheap and simple. Everything, but the correct processing, which significantly improved since Exodus. The pieces are solid and illustrations great. Maybe game tiles are a little too hectic, but it is easy to orientate in them. However, here comes number of complaints – orange cubes represent red and there are only four help cards, although you can play up to five opponents. Yes, small issues and something to learn from in the future.

We certainly have a good feeling from playing Praetor. It’s a smart and balanced euro game, that offers a huge portion of laborers sent to work. This time, however, you must take care of them even when they return home. Some of them even reach retirement. Clever usage of dice is then just crowning all the fun, by which were we pleasantly surprised. Praetor is a sturdy board game and as such, it can be highly recommended.

Praetor was called a point salad somewhere on the net. And it really fits, because it offers a bit of everything. Fortunately, this mix was bathed in sauce and good fun is exactly as it was completed. Some issues with processing may put sticks in front of your feet, but eventually the construction of buildings and using their abilities will be the main things, that will interest you. Players must carefully take care of their workers, who may get better, but also old and retiring at an appropriate point. There are more ways to gain the Emperor's favor. Game keeps interest of gamers after more matches due to asymmetric variant, plus its fun in all of the available number of players. Praetor is therefore hilarious and thoughtful euro game with a few minor shortcomings, dominated by too common topic. Praetor is dead, long live Praetor.