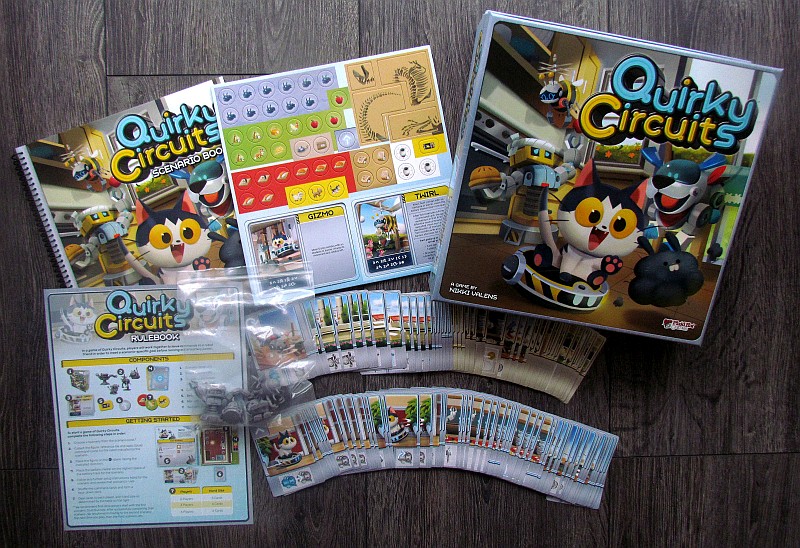 Robots surround us from all sides. But they rarely manage without our help. They are waiting for instructions to help them accomplish their task. Correct commands in the appropriate order are the basis for the success of each job.

And children or families can remotely control their tiny robots in a Quirky Circuits board game created by designer Nikki Valens and delivered by Danalyn Reyes. All the fun will take place under the logo of Plaid Hat Games, which underwent development and release in 2019. Esdevium Games is now entering Europe.

On the lid we see cheerful robots, who invite us to a square box of classic dimensions. After opening it, a little disappointment awaits players in the form of a relatively empty box. But still, the reason for the size of the box is visible at first glance and is a book of scenarios. When opening it on any page, the right side always serves as a game board. And so it is absolutely essential, that the book is large enough for the robots to move. In the first step of preparation, players simply choose a scenario from a wide range of 24 different tasks and open scenario book in the middle of the table. 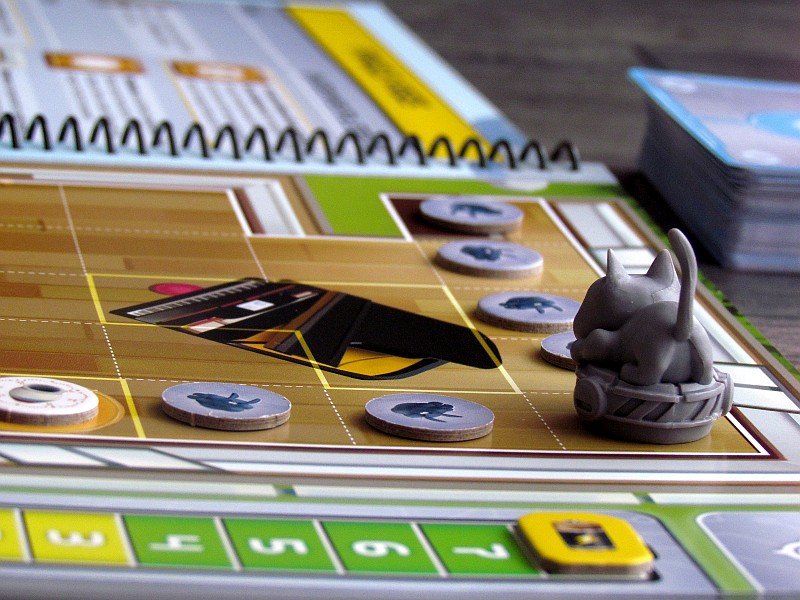 One robot has a leading role in each story. Players take his figure, help card and command cards. Then, they simply place the robot figure on the starting field. On the right side of the map, there is always a battery scale, that will count down until the end of the effort. The first box is marked with a token as starting fully charged battery. In addition, they can expect special rules for the scenario, which usually involve spreading additional tokens directly on the map (which has seven rows and a variable number of columns – from five to seven). From the shuffled deck of command cards, players receive cards for their own hand and their efforts can begin.

Each player has his own cards, which cannot be shown to others, even though the overall task is to be the result of a common effort of all participants. Fortunately, some general information is also apparent from the back of the card, which indicates its type – whether it is movement or cornering. 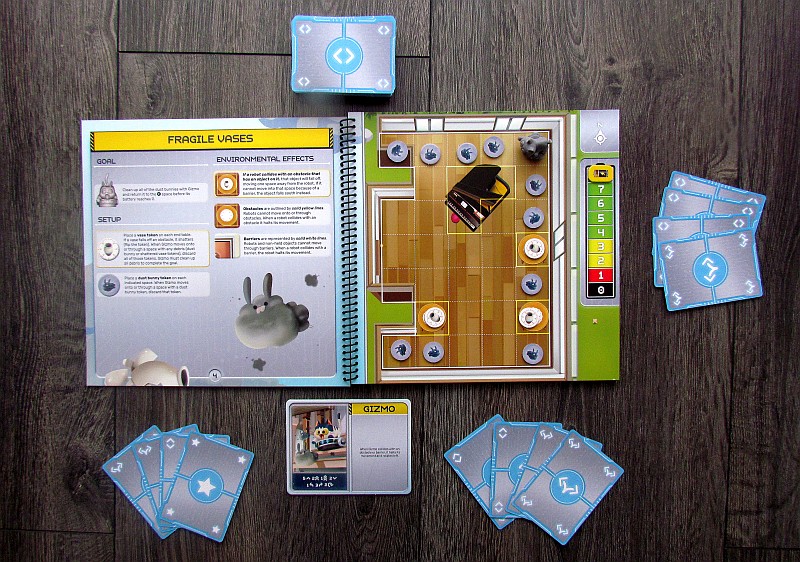 Together and simultaneously in each round, players plan a set of five cards. Everyone plays at the same time, chooses by themselves and places the card face down at any time they wish. They must be placed from left to right, and each team member must have at least one card in the set of instructions. However, the upper number is not limited, five being the least. Cards instruct the robot to rotate 90 or 180 degrees or move one or more squares forward.

Then, all the programmed commands are gradually revealed and executed one after the other from the right. This will allow the robot to rotate and move around the plan, ideally performing the task. For example, run through some positions to sweep the dust.

After evaluating all the planned moves, players draw new cards to the prescribed number, the scheduled cards are moved to the discard pile and, above all, the robot’s battery is discharged by one point. 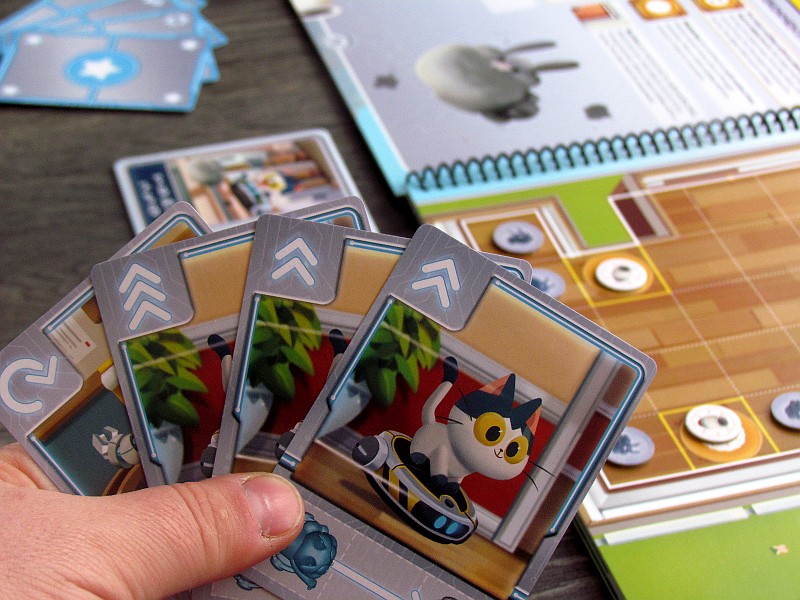 The game continues until players are able to complete the task. But trying together can also result in failure, if the battery runs out before completing the task. So it is clear, that each story is set exactly the number of turn, for which everything can be reasonably balanced.

Quirky Circuits is a cooperative game, in which the main role is always one robot. Each story works independently and tells about one of the tasks, that robots might have to do (mostly in the future). But to succeed and plan the moves at the right time, you must be on the same wave with the other players.

Players are not allowed to speak and are prohibited from any reasonable communication. So they have to read each other’s thoughts. Have you ever heard of that? Well yes. The recently reviewed card game The Mind has a similar mechanism and has won a number of awards and nominations for the Spiel des Jahres 2018. Well, and this new game learned its mechanics there. 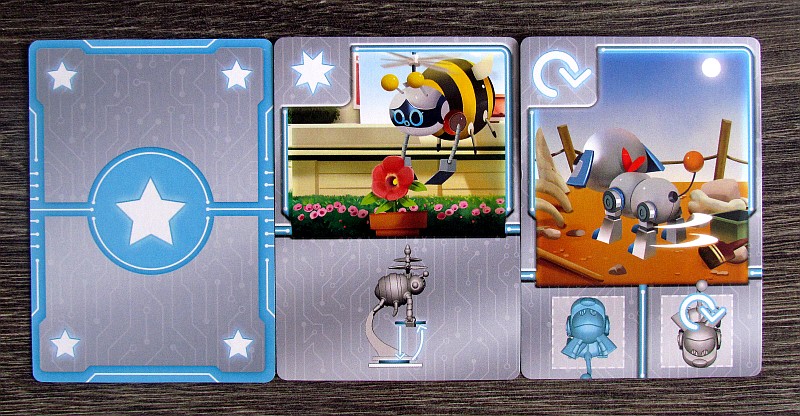 If you are looking for a game, that you do not want to take seriously, have a great time with and have a chance to win together, then Quirky Circuits is great candidate. Team members are not completely in the dark, because the cards show at least their type on the back. And maybe that is the main moment, that gives at least the little bit of control you need over the game.

The basis of the fun is the discovery of cards. You never know exactly, which cards are planned and revealing them can cause funny situations. For example, the robot would just spin helplessly on the spot. Fun is guaranteed.

The difficulty of individual tasks is gradually increasing. Therefore, it is recommended that players go through tasks one by one, as the guide puts them ahead of them. Everything is always explained clearly and in detail in the scenario. 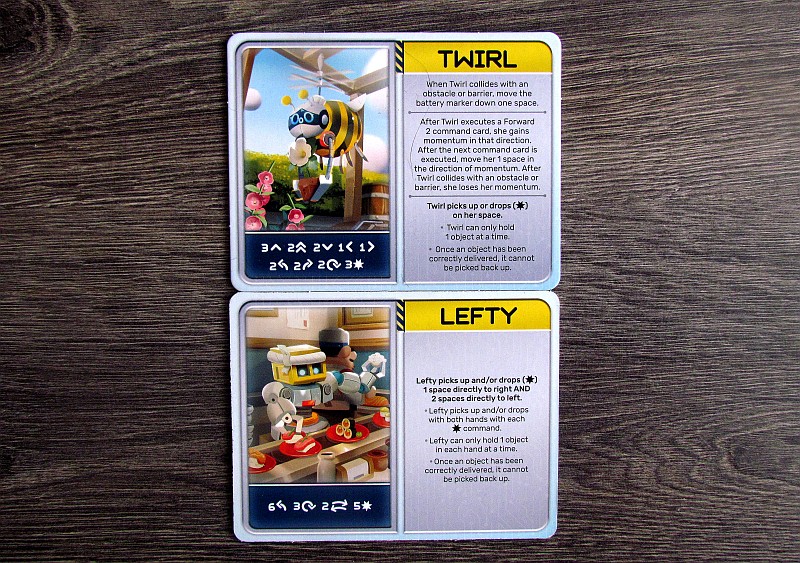 In two, the game is much more tactical, but the number of cards in the hand varies. Thanks to thR four player game is still playable, but from the course you will somehow feel that you are playing some party game. In general, the scenarios are fast and players can expect some 30 minutes to complete (whether successful or not).

Processing is excellent. It will delight with miniatures, but above all a wonderfully invented story booklet. On the left there are always specific rules, on the right there is a view of the game area from above. There are a lot of robot movements, besides the classical directions, there are various shifts, jumps, shifting or reversing. 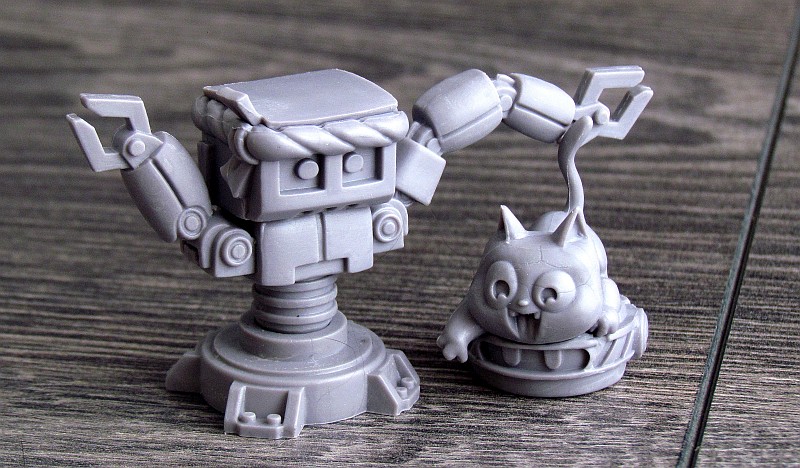 Quirky Circuits is a game that at first glance looks like children’s fun. This corresponds to the graphics and the seeming simplicity of the tasks themselves. But all this is swept off the table when you learn that planning is simultaneous, cooperative, but without any communication. Even the seemingly simple task of sweeping up garbage can suddenly seem insurmountable. Be careful, because Quirky Circuits is a completely different (and excellent) game!

- just guessing for someone

Quirky Circuits is not for everyone. This is the evolution of The Mind card game, which this time arrives in the world of robots. They need your help with classic housework and have adventures, while doing so. And it is up to the players to play the right cards at the right time, so their robot do not wander helplessly around. The game is variable enough with many scenarios and is definitely not easy. All team members will have a lot of fun here. So if you don't mind reading thoughts of each other and feeling helpless, then Quirky Circuits is an excellent test for your team telepathy.

by Dušan on 16. 12. 2019
I could think so! As soon as I start thinking about myself for a moment, went to save the princess and left the royal city unprotected, the enemies attack. [...]
Comments
Leave a reply