Review: Raben Stapeln – crow to crow holding on together 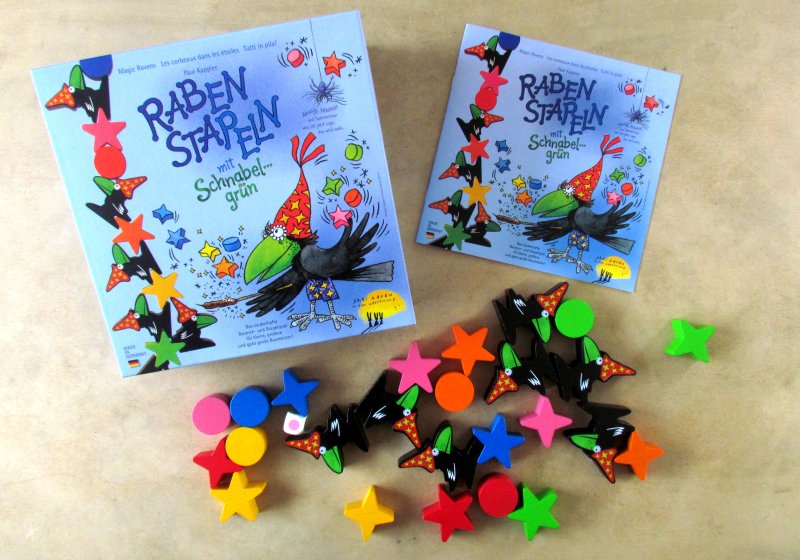 Maybe you know the classic saying „Birds of a feather flock together“. It actually seems, that its even quite true, when you think about it. But in reality, phrase should read “Birds of a feather climb on each other”. Since ancient times, crows are sitting on each other’s back and together with various objects create a pattern, from which onlookers become dizzy.

It’s such a crow olympics and we have the honor to attend it as well. In the game of Raben Stapeln from Drei Hasen in der Abendsonne are these black birds playing the lead role. They were chosen by author Paul Kappler, who designed the game in Germany and asked Johann Rüttinger to create illustrations . All their work was published in 2014.

And on a light blue lid, we already see ravens themselves, who are piled into a sort of pyramid. We see even one, who supervises and controls everything. This wizard with a wand is missing, and instead of magic and magical sticks, we will have to make do with our own hands. At least that is what rulebook teaches players, once they draw it out and read in four languages. Below them, there is nothing more, than a big bundle of wooden components. These are not only pieces of ravens with red bonnets, but also stars with different numbers of rays and also circles. All these shapes are glowing in different colors. 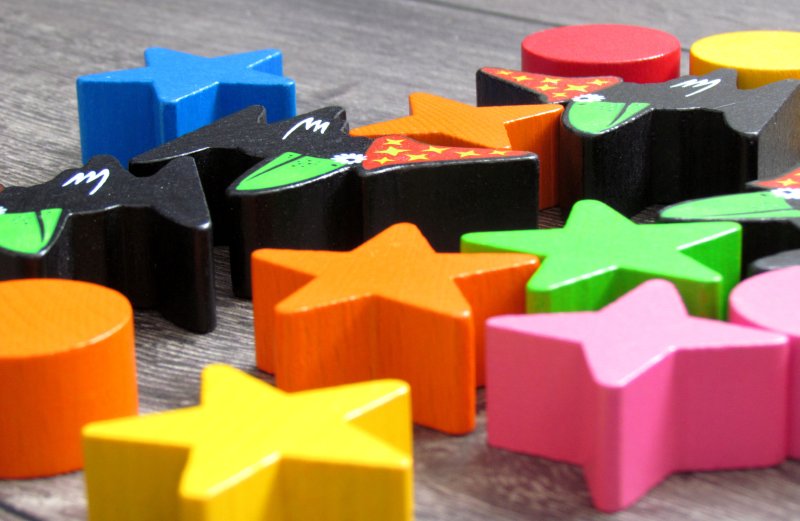 At the beginning of the game, players spread all these wooden pieces on the table, so that they are easy to reach. One of them (according to the rules the youngest) randomly draws four blocks with his eyes closed, from which will they build a horizontal platform, that will provide support throughout their construction.

Then, actual raven magic show may begin. Starting player (selected by any method) takes a dice with colored dots, which we have not mentioned in the list of components and roll with it. From the menu on the table, he can now select any piece, whose color corresponds to the dice. Stone is then laid on existing pyramid as firmly as possible and without demolishing it. When doing so, player can use both hands to help and hold the whole building.

Apart from the stones, players can also use raven wooden bodies. They are however allowed to sit on the building only, when active player rolls color, that fits one of their body parts, ie yellow, red or green. 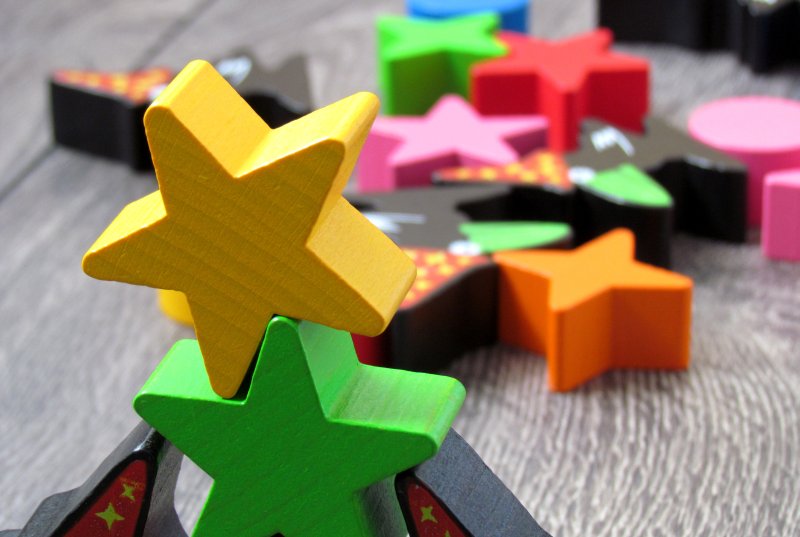 Gradually, players take turns and are adding more and more pieces into the building and trying to achieve the highest and wildest designs. If a participant causes construction to collapse, he immediately comes off as a loser. Others may continue with what still remained standing. And who really wins? Everyone, who is not eliminated until the end, when all the pieces were used and building still stands.

Magic Ravens, how the game is called in the English version of the rules, is great entertainment for the little ones. Children can easily play and build with the help of their parents, because they can just as easily collapse the whole construction by being uncareful. All it takes is to be a little too greedy or insufficiently precise. There is always enough chances to lose even for adults.

It’s nice, that this box has no room for rivalry. Players will always work together and try to get their way through building all the way to the finish. But it is still true, that if someone makes a mistake, a bad decision will cost him the victory and can only watch others as they try to tighten its construction towards completion. 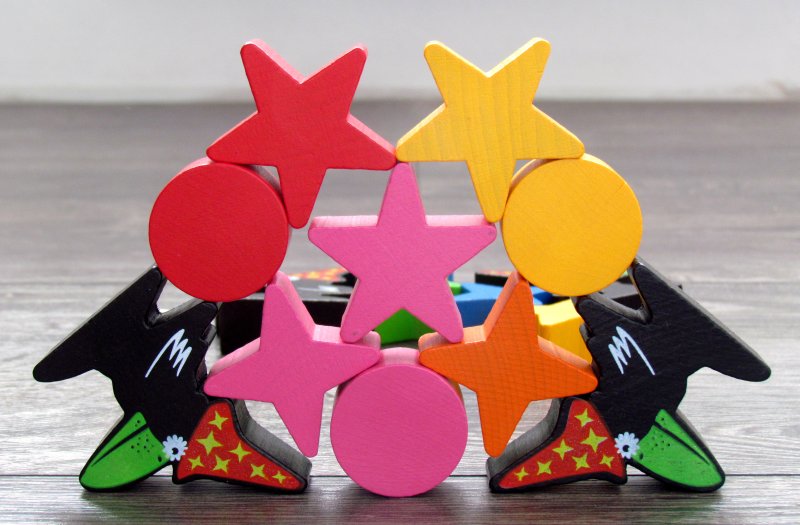 Until now, we talked only about the highest version of the rules, which is ideal for children of four years and older. Of course, you can even in this scenario easily play alone, either in building for height (you can measure your creation and write down any new records) or for effect. It is possible to build an incredible constructions from these figures. Players will find inspiration at the end of the rules (and even more on the surrounding photographs).

But that’s not all. Smaller children can try a simpler version, in which usually raven figures are not used. Children simply build pyramids by color, either in the order given or in dependence on the dice. Game allows even the smallest children to practice their motor skills, color recognition and patience. Three different versions of difficulty (four with the top one), then ensure, that each child finds the correct version for his skills. And all this since three years of age up, as recommended at the two easiest games!

The game has beautiful processing. Wood is an ideal material for such young children. In addition, all variants are played very quickly and it is no problem to complete game within ten minutes. In the hardest version, it also depends on the speed and difficulty of the task, which together a team of builders to choose and number of collapses they have. 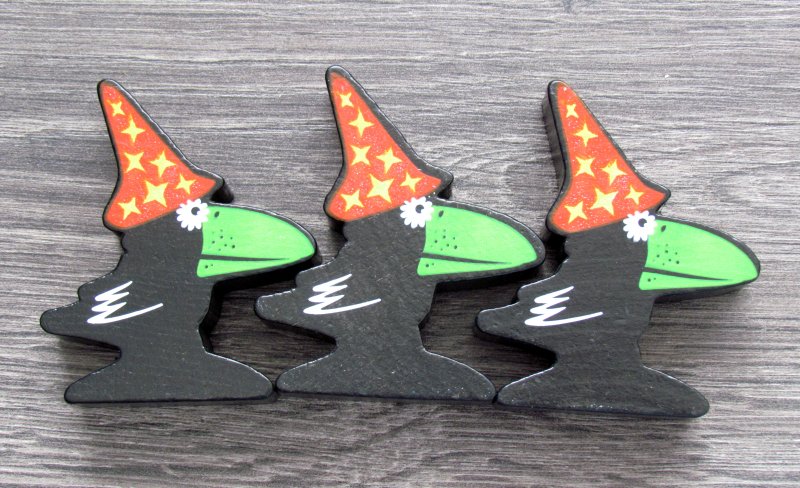 Raben Stapeln is indeed a game, but in fact it is also a playing set. Players always build a pyramid here and there, either jointly or alone. Sometimes using the dice, sometimes without. But above all, the pieces are so cleverly designed, that they really hold on top of each other and allow you to create incredible buildings. Raben Stapeln will hugely appeal especially to small builders.

- nothing given its target group