Review: Raiding Parties Brethren of the Coast – you better have them on your side 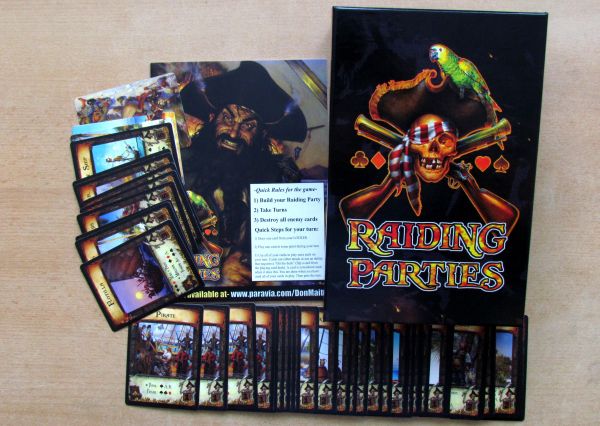 Maybe you remember your pirate beginnings. You were just a scared little fellow, who’s heart pounded every time, he climbed the mast and crossbones. You were startled by any splash in the sea and everyone made jokes on your behalf.

You dreamed of earning your place on the captain’s bridge. Get your own eye patch and steal a parrot from the navites on some lonely island. But you just washed the floor and helped in the kitchen.. And nobody cared for you and knew you..

But those times are over. Now you are an experienced pirate, commander of the regiment of thugs with a chance to establish it completely anew. In separately playable expansion to card game Raiding Parties (review). Its author is Nick Pace and box is called Brethren of the Coast this time. Illustration will not disappoint us, as they were all done by excellent Don Maitz, who is specialist on a pirate theme. 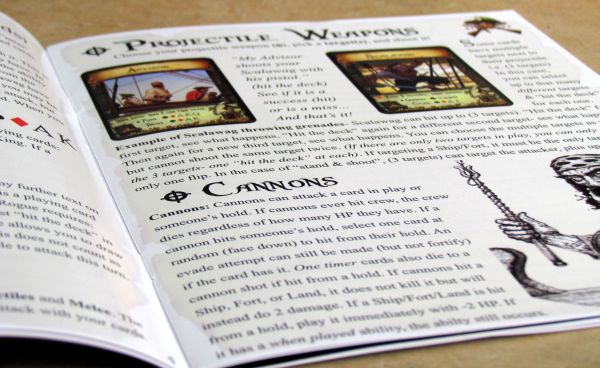 The Brethren of the Coast will delight you from the start with its elongated black box. This is a nice change from the original game in small card boxes of thin paper, we had in our hands for the first time. On the cover, you will find the same classic pirate skull with crossed muskets and a parrot on his hat. It is perhaps a pity, because after lifting the lid, you are welcomed by nice picture on the brochure with the rules, which would certainly deserve its position outside the box, on the cover.

Yes, you heard right, we said booklet with rules. This time, there are no cards with little letters on it, because expansion contains a number of examples and lots of text, but also really good illustration in the middle. You can (if you want) cut out small round tokens injury from the last page, which can then be divided among your characters. This way, you are no longer obliged to use pen and paper. But we do not like cutting things, so we managed with our wooden material stock.

Box inside is filled mostly with a plastic insert, with hole in the center for fifty cards, that are included in this expansion. You think its too few? Do not worry, its sufficient allright. If you remove the insert, there are no problems in storing original boxes of Raiding Parties as well, which is excellent news. 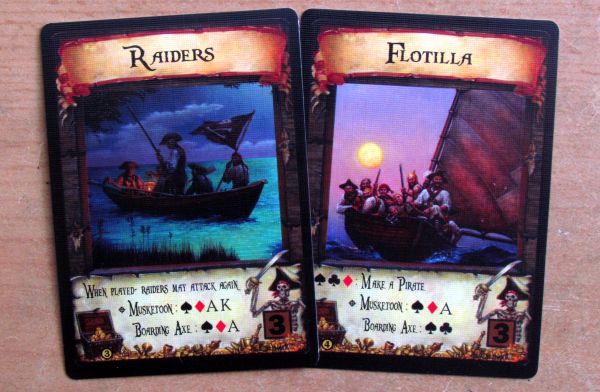 Raiding Parties is a game, that combines hard pirate fight and elegance of simple card games. We have already seen that in the basic game a year ago. But Brethren of the Coast are not only separate game, but also an expansion. Although independently playable, but still you might be interested in conjunction with the original game.

But first we must recall, how does such a lot of pirate duel work. At the beginning, you create your deck, where you choose cards from common stock. You buy them with gold to the maximum allowed value, depending on the intended duration of the game. Twenty gold pieces are for a quick game, completely without using strong ships and forts, thirty is middle duration and strength of one ship or fort on your side. At forty you have no limit, but get ready for a longer game, lasting approximately an hour.

So you have made up your deck, as well as your opponent. This is done without problems out of this fifty cards mentioned earlier as most of them have much higher values, than one. You start by drawing three cards out of your drawing pile. Now is the time to call one more pile into battle, which is unfortunately not included in Brethren of the Coast, although it were shipped with original Raiding Parties. This can be substituted with classic card deck with all the aces, kings and spades mixed up. You put it in the middle of the table, as it will play most important role during the game. If you do not have the original version of the game, you can use any deck with 52 cards. 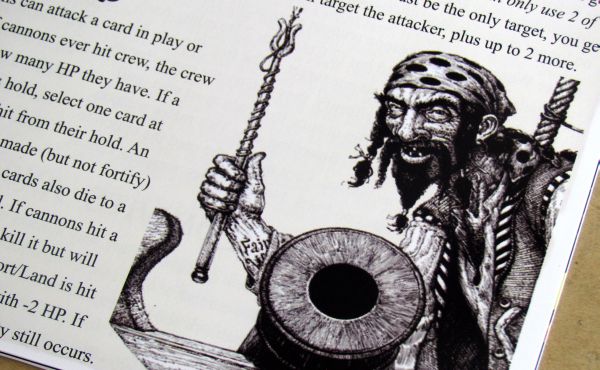 Game consists of both players turns in sequence. Every player must draw one card from his deck first and add it to his hand. Order of actions in the rest of your turn is entirely up to you and depends on how the game is developing and what cards you have. You are restricted only by one obligation: at any time of your turn, you have to play out at least one new card.

These cards played on table can be used to activate abilities. Each character has its price and also number of lives in lower right corner – hits, that this pirate or thing lasts, before it goes to pirate heaven.

You can activate any number of cards, but it is not certain, your action will succeed. For actual result of your efforts, you have to ask the common deck in the middle by turning the top card. Every action on the card has written color or value of card, it requires to succeed. If card corresponds at least to one parameter, you made it!

Rotating of cards from common deck is most closely related to attack, but not only melle, also shooting attempts. Certain characters, due to their special skills, may be able to fortify or dodge your bullets and ruin your work even in a success.

But pirate fights are always to the death. Whenever you have a character on the table, who can fight melee and not only firearms, you have to attack. Otherwise, the attack can be chosen as an option.

You first selecting the appropriate target for your pirate, but before the sword stuck into each other, the defender has a chance to shoot once as first defense. Hits like this, of course, count and may even mean end of the fight, before it even began. If both opponents still stand, close combat continues until one of pirates falls dead.

His card goes to the discard pile, where is it no longer available for you during this game. Battles continues on, until one player loses his last character. If you had no card to reveal (empty drawing deck), its the end of the game. Winner may celebrate, dance and drink rum, as only pirates can.

Brethren of the Coast do not add anything in terms of gameplay. They are still the same game, we played before. But that’s probably well, because this game is a guarantee of success thanks to its straightforward gameplay, which is on top of all explained in detail this time.

So what is it actually extending? It adds a new card. There are old friends pirateers, privateers and swashbucklers. Even brethrens were in original deck, but not in such numbers. But there are also raiders with two attacks, skippers summoning ship in your hand or quicksilvers, who put reinforcements directly into the game. 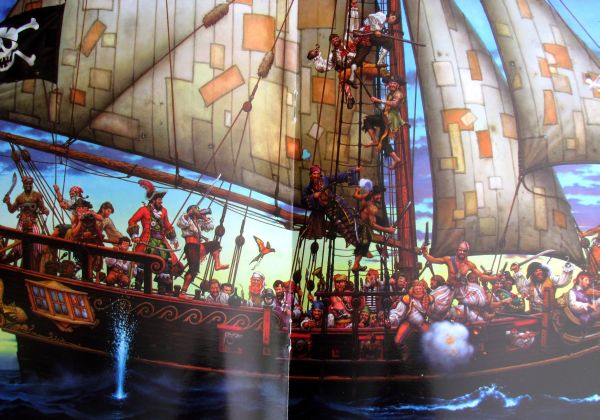 Great popularity also gained Captain Redd strengthening swashbucklers, new boats offering reinforcements and dueling area, where you can shoot at opponents. At the same time, this card also counts as your land, which is not so easy to conquer. Any such fortified position can be defended, but Duelling Grounds can also attack.

In addition to gaming, you can see three more cards inside the box. One contains all players, who have supported Brethrens on Kickstarter at the right level to get onto this list. On the remaining cards are three preconstructed decks compiled for 30 gold. On all four cards are also nice and detailed illustrations of a pirate on the back.

All three variants are recommended to try, before jumping to preparation of your own decks. Each report focuses on specific elements of the expansion. The first deck revolves around the eponymous brothers, who quickly fill up your party and rushes at the enemy with their weapons or throwing ax. 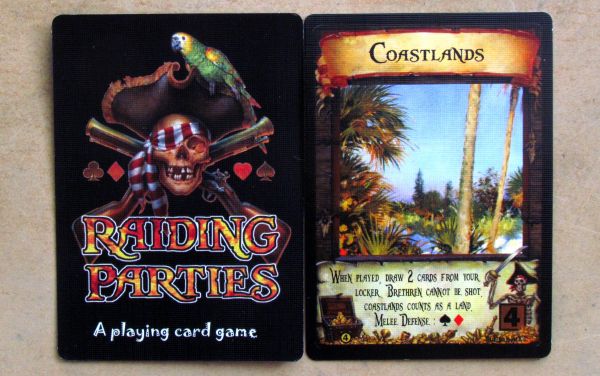 It is a pity, that new box does not contain a deck of shooting cards. Therefore its not suitable for beginners, who we should therefore recommend to buy first original version called The Golden Age of Piracy. It, although hidden only in paper box, brings the same fun with it and one deck of cards more.

All this recommendation would be true, if it were not for one thing. In original version of the game, game rules were explained only on the cards in a condensed way, succinct and learning to play the game with them was very difficult. This is the reason, why you should start on the contrary, with this box, which is priced similarly and then buy Golden Age of Piracy later, after you know, how to play it.

Rules are really detailed this time, full of examples, that will leave you in no doubt, author has learned from his mistakes. You will be tought quickly everything, you might need and whatever question you might ask, you find answer to it in here. Good rulebooks are hard to find and although on second attempt, this one is good. 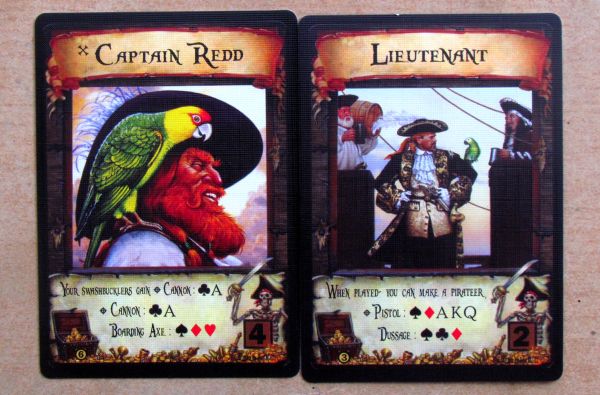 Pile of cards contained in box serves without a problem match of two players. You certainly do not have to worry. If you own the original Raiding Parties, you can enjoy a richer selection at the beginning of the game, when you build the deck. Later, you’ll notice the difference only in some new cards.

Raiding Parties: Brethren of the Coast is still a great game and good expansion. Pirates are like water. Tireless in attempts to defeat their enemies. They threaten with sabers, shoot from muskets, and even when the bullets bounce back, they keep running forward. This time, you can do it to and add one single box of Raiding Parties into your cart..

- deck Hit the deck is missing

Raiding Parties: Brethren of the Coast is standalone expansion of pirate card game, we really liked to play. And this box succesfully follows its footsteps and corrects mistakes, which has the original made. It has nice packaging and moreover excellently processed rules. But then there is a missing card deck, that is used to evaluate successful attacks of your crew. And these cards were part of original game. It creates an atmospheric shortcoming, because the original cards contain nice thematic illustrations, but now – if you do not own it - you will have to use some regular deck. Brethren of the Coast are therefore great choice for owners of the original game, but that makes new rulebook a little irelevant. New cards enhance your experience and deckbuilding options and that is, what makes expansion for Raiding Parties worth a look..