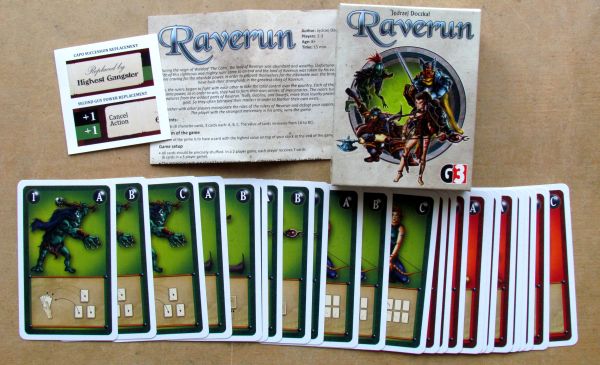 Raverun was once a peaceful country. I remember that time and I remember it every day with hope, that it would return. Instead, new platoon of soldiers passes around our house every day to engage in combat. Why are they doing it? For gold, of course. Sons of the deceased king are handing it over to whoever joins their side. But mercenaries lack loyalty. One of the brothers died with blade of his own soldier, he should not have trusted him, because other side gave him bigger purse of gold. This is, how it goes today in Raverun. Odin protect us!

And in this war-furrowed ground, Raverun card game transports you immediately. Its the first of four games, which were introduced by a new distribution company G3 at fair Spiel 2013 in Essen. The author of the smallest boxes promising entertainment is Jędrzej Doczkal and original author’s company is ST Games League.

This is a card game and you will not doubt about it from the first moment. Hiding in a small box with a lid, that will not overwhelm you with its contents, even after you open it. Inside, there is a short two-page rulebook and 24 cards. And that’s all, what you are going to use, when fighting for control of Raverun. 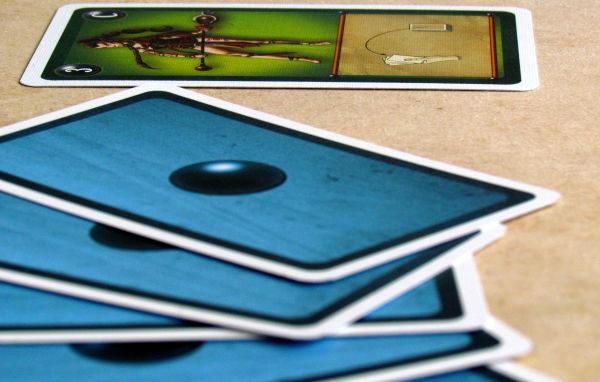 You will discover a total of eight characters of mercenaries on the cards, which can be split apart not only by their image, but also according to numbers in the upper left corner of each card. That is power of this particular soldier and is always common for three cards in the deck, all with the same illustration. But even seemingly identical cards from each unit can be distinguished in their strength, due to letters in the upper right corner. These divide three cards to A, B and C. Due to this, each card has a unique value, while 1C is during the game considered stronger than 1A.

Each participant gets seven cards for the duel (or six, if the game is played in three players) from a shuffled deck. Remaining mercenaries create a drawing pile in the middle of the table, where you can recruit them in time. But that’s all you need to know to start a fight.

Round is played by all participants together, everyone selects one card from his/her hand and lays it face down in front of him. Now they must wait for each other and only, when they have all played a character, they will reveal it at the same time, evaluate its effect and put it on their own discard pile. Player can look through his discard pile any time during the game, so he can easily see, which cards have been already played. 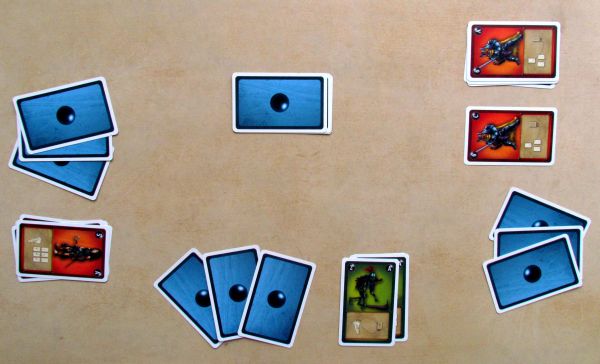 Each round will be won by player, who used mercenary with the highest value. Because each character has a unique value consisting of number and letter, it is easy to determine it. This player now has great advantage, because he can determine order, in which everyone will play another card from their hand, this time representing a warrior. This new card is played straight face-up in front of the player, who creates their battlefield like this. But here are useful only red card, that can fight.

Whole clash is won by card with the highest value, which will as a victor remain in front of the player. Others move their warriors to the discard pile. Now is the time to use skills of the top card on the discard piles – in most cases, the defeated warrior. Their ability allows you to steal other cards, exchange them for new ones, move units on the battlefield or draw new mercenaries from middle deck.

The cards have two background colors – red and green. In the event, that you succeed in getting new green card from your opponent, you can perform another action. Of course the one that is printed on the card, you currently gained. Once all players have exhausted their actions (standard and bonus one), it is end of the round. 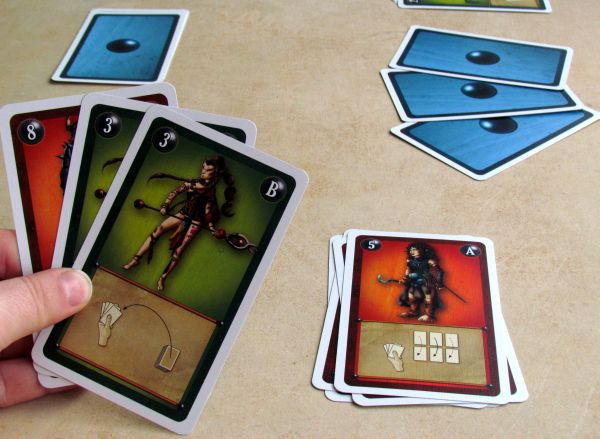 Game continues until one player ends round with empty hands. In such a situation, everyone plays one final round. Order is this time determined by red cards lying in front of players on the battlefield. Player with the highest card (preferably 8C) takes advantage of the last turn, but the game will be won by whoever has highest value resting on its discard deck at the very end!

Raverun is a card game, where players are constantly attacking each other. An important driving force for the entire match is chaos. Warriors are constantly shifting and changing their owners and in no moment, you can be certain of anything. This mechanic meets with praise by some and criticism from others – it depends on what you like.

Most important in the game is order of the cards, that you can keep on your discard pile. It is crucial to keep in mind, that your opponents can steal a top card, so it is advisable to have another strong always hidden underneath. But in each round, there will be added one or more cards from the battlefield over there. 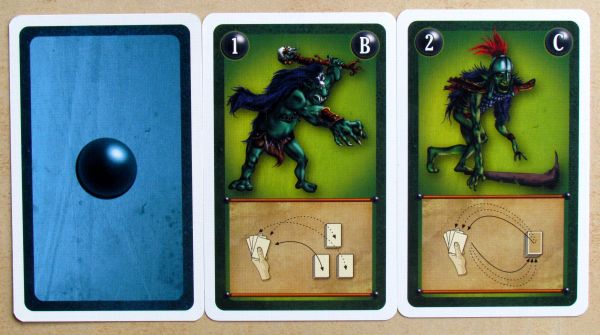 At first glance, it might seem, that the player who wins the first battle, has a great advantage. Only his warrior remains on the battlefield, because he survived a bloody massacre. But the cards have the ability to shift entire result in one second. For success is not only important to play cards in the correct order, but also to know, how to use actions in your favor.

When you vote on the order of the round, although at first glance it seems futile, but role of the last player has its major advantage. He is last, who brings a mercenary to fight. However, you need to be lucky, because if you do not have right cards in your hand, you won’t win neither vote nor battle. There is surprisingly quite a lot of different computations, that can result in longer turns of individual players.

Unfortunately, we have feeling, that player, who deserves it, does not win every time. For the most part of the game, you will have the feeling, that you are doing all this just to get to those final few moves, which will decide of your destiny. In fact, you are even not perparing some solid ground for your tactics. You just optimize your hand with cards for the final battle and try to always play the lowest card, but you must also be winning battles at the same time. 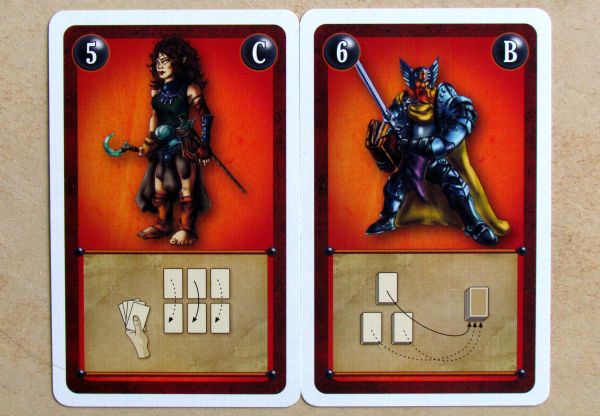 Just play, play and suddenly it’s over. Game misses any gradation, but primarily any reason, why they are first two thirds of the game even present. Icons on the cards will not help, because they have not exactly ideal layout and both drawing and discard piles are represented by the same pictures. You will then have to remember, which card actually it which.

Raverun is a card game on track, but unfortunately it lacks much of the fact, to be really significant experience. Perhaps it could please players, who love game ruled by chaos and not thinking for a long time, because game is fast and you’ll get soon to a decisive end. However, most players would rather reach for other, better games instead.

Raverun leads us into battlefield, where several small armies clash. But your goal is not to defeat every single one of them, but to have a strongest fighter in the end, standing on his feet and triumphantly roaring into the world his victory. Players are fighting for order by playing cards secretly, but its also about those warriors, you get to play later. Most of the time, your discard pile is crucial. Top card in this place not only defines, what you can do, but also what can be done to you by other rivals. Whole match is filled with conflicts, unit skills are interesting and can truly mix development of the game. But lots of things in here are luck dependent and everything focuses just on one moment in the end of game. Your top card on discard pile decides, who is the winner. This also means, that most of the game loses its meaning and moreover its gradation. Raverun is built on interesting thought of using discard pile differently, but unfortunately (besides graphics) did not get a proper treatment..