Review: Reavers of Midgard – a pilgrimage to fame

by Dušan on 15. 06. 2020
0
Doporučení recenzenta
previous article
Review: Kodama 3D - a tree and its colorful inhabitants
next article
Review: Mutants The Card Game - welcome to the arena
Contents 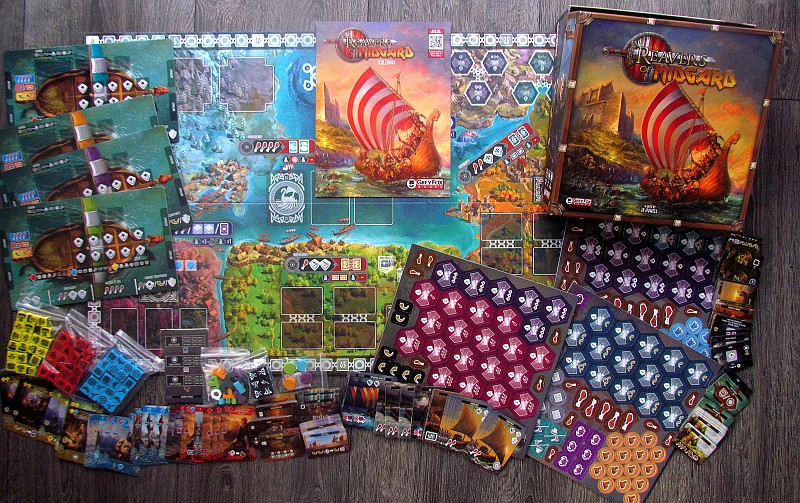 My ship is a small kingdom, where I am the almighty ruler. We are recruiting new reinforcements in every port, because we need to replace the sailors, who have fallen. Our big rowboat is not afraid to enter even the most dangerous sections of the known ocean and face the terrible monsters from the depths and even abandoned islands. It brings risk, but also fame. And that is, why I am not the only captain wading through the waters this way. But I want to be the most famous.

Reavers of Midgard is a game that takes us back to the world of Midgard, which we have already conquered with our workers once. This time, however, most of the effort is focused on the foamy sea full of traps. This is exactly the environment that J. B. Howell prepared for us under the banner of Gray Fox Games. The game is distributed across the European borders by Esdevium Games.

On the lid of the square box we find a ship with taut sails. Inside, a large folding board awaits the players, which offers a sea connecting several lands. The map will be filled with stacks of various cards before each game, whether it’s voyages, fights or predictions. Each location on the islands will receive a starting set of cards (recruits, forts). In the upper right corner there is a place for tiles of territories and on the map also have the positions of the crew dice and ship upgrades. 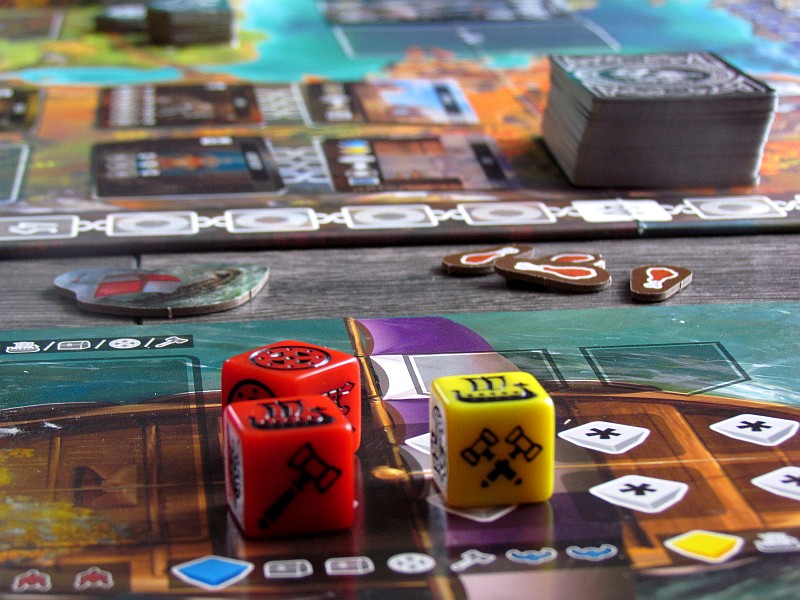 Each player will receive a game board with a picture of his ship, a corresponding one wooden figure, a supply of food and a point stone. His starting position in scoring is zero square on the scale of fame. Everyone also needs a starting crew in the form of two title reavers. These sailors will bring with them the captain’s crew dice, printed in the upper left corner of the card. As during the game, everyone now has the freedom to freely decide, whether these recruits are specialized crew member (for a specific conquest action), promoted to a commanding officer role (and receive a bonus) or send him to fight, discard a card, but he gets more crew dice for playing.

During the game, participants will sail their rowboats on the waters of the game board, all across six rounds. The novice player chooses one of the many possible locations on the map and places his ship figure here. Subsequently, he and his opponents can activate the cards of reavers, who are specialized for that action (it can be village raids, fortress attacks or battles at sea). 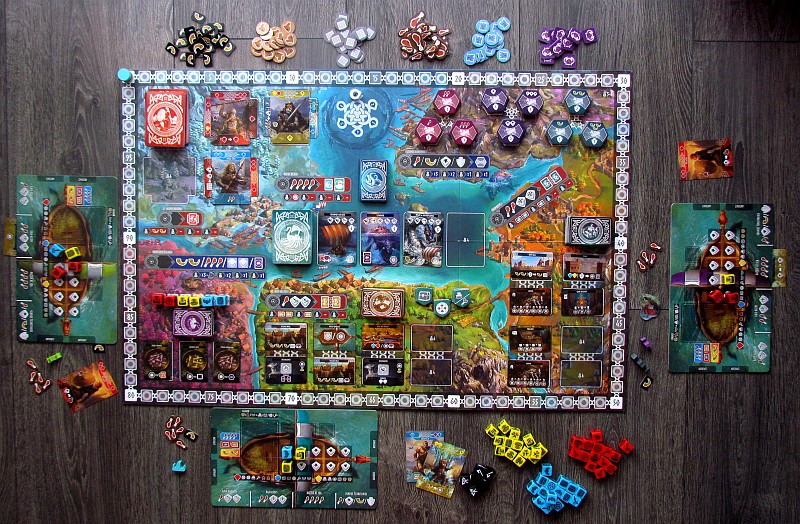 Then the individual rivals can each choose, whether to take part in the selected action (and pay the corresponding entrance fee in the form of food or dice) or rather choose to rest. Thanks to the possibility of recovering, the captain gets one crew cube or two food tokens to his supply.

Most of the time, however, players will want to take part in actions and get as much loot for themselves as possible. Whether it is conquering cities, fortresses or fighting at sea, it is always necessary to first consume food and crew cubes. The location thus offers an effect, that differs (weakens) according to the order of the players in a clockwise direction. The simplest is the trade option, for which players can gradually choose a free option from the menu.

Depending on the chosen position on the board, players can primarily acquire new crew members, who are again chosen from the menu or blindly drawn (two cards) from the deck. Newcomers can then be included not only as team dice on a ship, but also to specialize again in one of the actions for upcoming rounds. Whenever the corresponding action is reactivated, the ability of this character is also triggered. 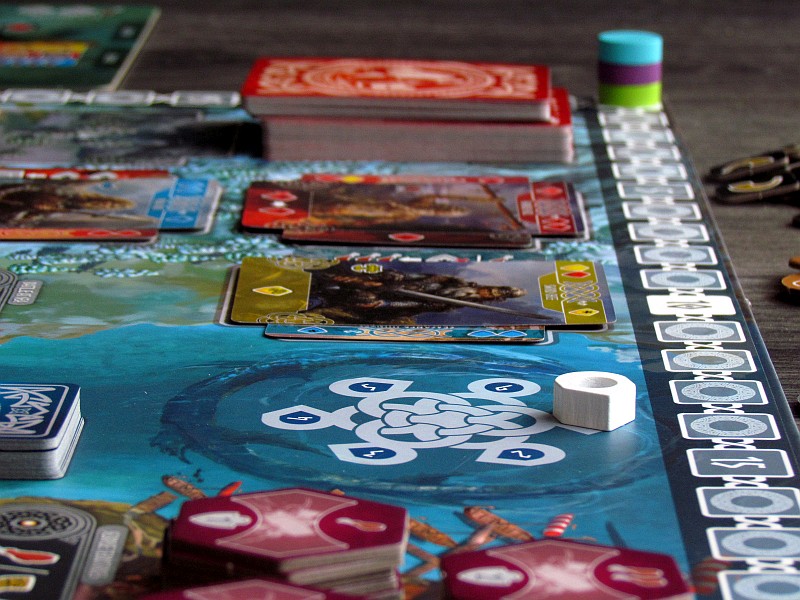 But that’s just the beginning, because with this crew, players will go to sea and fight. They hand over four food tokens to the beginning, but are given the opportunity to face the enemy. But before that, the player must repel the journey event. The fight itself can be won without casualties, just by throwing away the required number of sailors’ dice (sacrificing them for safety of all). But if the player wants to save them, he can fight instead and try to make a sufficient number of hits.

From raids on villages and fortresses, players will gain treasures, artifacts or ship upgrades. Most of these items will bring rewards in the form of glory points to their owners. However, territories that can be tried to conquer for another actions are also valuable prey. The player gets a six-sided token to his property. 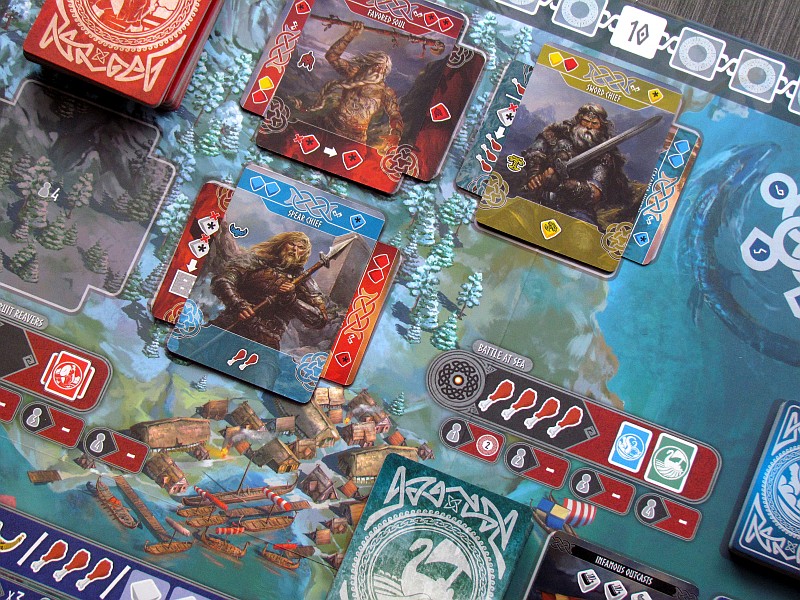 Throughout the six rounds of game, the players fight and take turns in the role of active player. Then everyone gains, but also loses (terror) glory points, and the one who has the most, becomes the most powerful raider in Midgard’s history.

Reavers of Midgard is a game full of adventure, but also an action from which others also prosper. As a result, the game moves forward in every turn, and not just when it’s really your turn.

The novelty is actually such a free continuation of the game Champions of Midgard, and in fact even mechanically. The main difference between this worker-placement scheme here is the fact, that your action can be performed also by others, following your lead. In order around the table with decreasing efficiency. This is also quite an original approach, because we are usually used to a variant, in which there are two levels – one for the active player (performs a strong action) and everyone else has the same chance. Here is added another distinction. 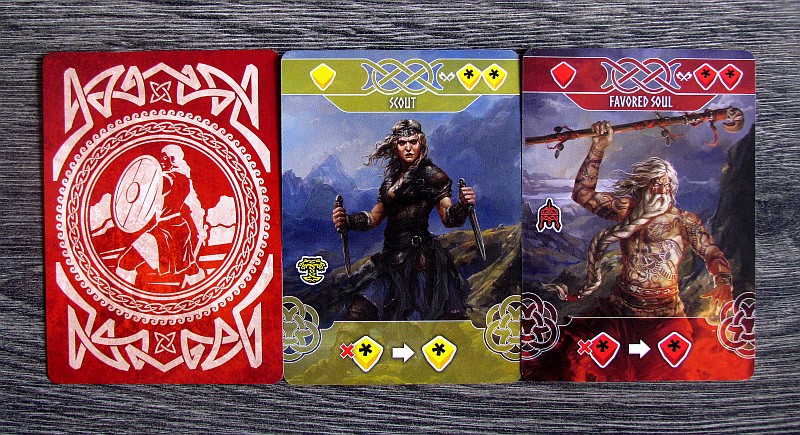 However, the game is again strongly focused on adventure, and in addition it adds dice to the seemingly calm euro game. The variability is great and for all the actions, you will eventually receive a reward that you can use to your advantage. There are no actions just to slow down the progress, the game progresses like a train, always forward.

However, decision-making within the game is more, than just the choice of a place, that will be evaluated as an event this time. The player must consider, which location he wants to use the most, because when rival chooses it, its much less efficient. But the title reavers are also an interesting element. Each card has three different uses, significantly different. Do you opt for bonuses for the next rounds or prefer an immediate benefit? 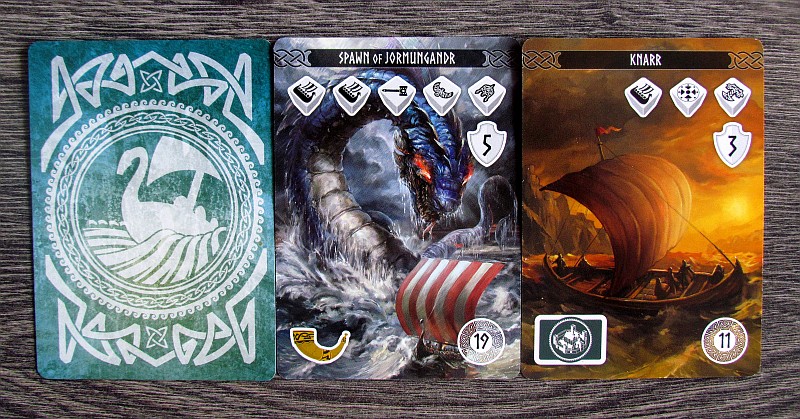 The only black polka dot on the beauty of the whole game is the final evaluation. Scoring is quite time consuming because there are simply too many artifacts, trophies and other assets acquired. And it’s not easy to count it and turn it into glory points quickly.

This is also reflected in the total playing time, which reliably exceeds one hour and can sometimes (with the highest number of players) approach two hours. In general, however, players are not bored because they interfere with the game on each turn. In order for the basic mechanism of the game to stand out, it is absolutely essential that there are more participants in the game, ideally four. 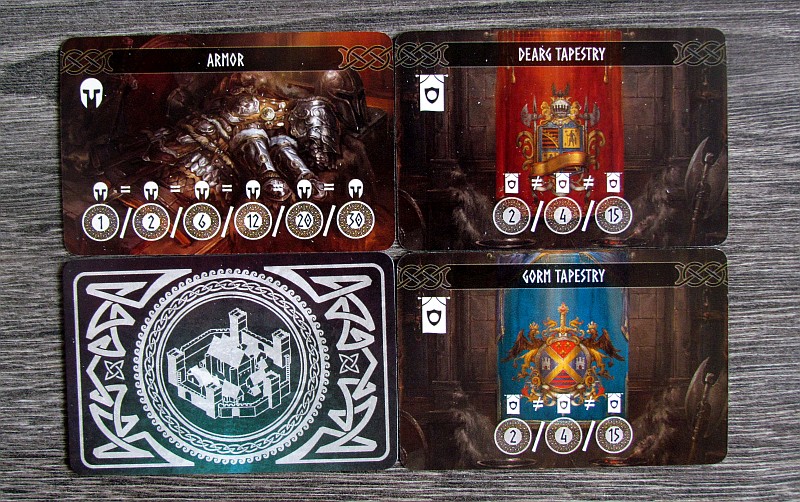 Thanks to those possibilities, Reavers of Midgard is a really excellent and fun game, which in addition to tactical possibilities also offers small unpredictable elements. It is this combination that makes it the really interesting point festival, which in the end is really won by the most handy player. Reavers of Midgard will delight lovers of originality, as well as anyone looking for adventurous, but tactical, fun.

- four players are practically a necessity
- longer evaluation of points

Reavers of Midgard is an adventure game, but in the middle of which remains sending ships across the board and activating locations. But the player does not occupy them only for himself. Everyone will take turns at the helm, although the other participants will not receive such good rewards. On the contrary, possibilities decrease in order. This is the moment, that makes the game interesting, along with the clever use of dice itself. And then, of course, the reavers themselves and three ways to hire them. The game is longer, as is the final score, but if you have three teammates, then Reavers of Midgard is a great delicacy to test your skills.

Review: Kodama 3D – a tree and its colorful inhabitants

by Dušan on 15. 05. 2020
As if we were living the worst nightmare. Above the New Gravehold’s houses, somewhere in the clouds, something terrible awoke. We see only flashes [...]
Comments
Leave a reply