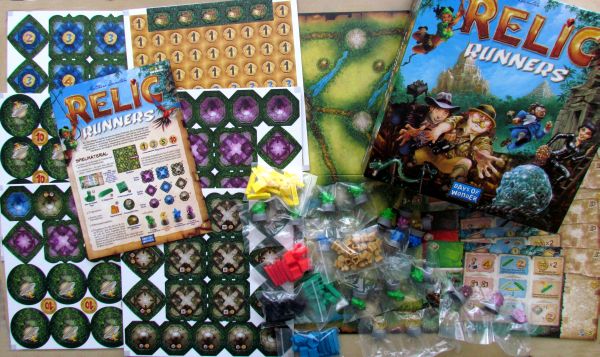 Crystal Skull was within my reach. I could almost feel its cool touch, but then a shadow flashed and Alice Black stole my well-deserved reward. Now she has already disappeared somewhere far away in the trees. I know very well, that I have no chance to keep up and catch her. I’ll have to re-immerse into ciphers on the walls and hope, that they hold a clue to another treasure. According to superstitions, a golden mask has to be buried somewhere around here.

Hunt for relics never ceases. We are convinced for the second time this year by a board game about this fact. After Relic Expedition (review) comes a family fun Relic Runners from Days of Wonder. Its author is Matthew Dunstan, making for a well-known company a step off from working only with proven authors. This means, that there must be a really interesting game hidden in this box, right? The look definitely works for us and pictures of Julien Delval brings pleasure to all your visual sensory channels.

Already the lid contains colorful illustration with adventurers of various colors, sizes and abilities, clearly indicating, what the game will be about in the first place. Even so, you will be surprised after setting it aside and peeking in. Not by pictorial rules or game board with paths and camp in the middle, but by beautiful colored miniatures, that represent individual relics. Each of them lie on a gray base and combined into twenty pieces in one box. 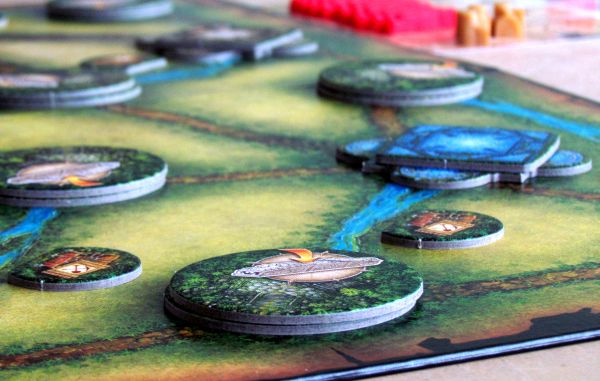 You will punch out not only tokens of victory points four values (1, 3, 5, 10) from cardboard sheets, but also tiles representing three temples floors and round ruins. Each floor of the temple is made of three different colors, that correspond to different abilities. Some are more suitable for final scoring, others will provide immediate benefit.

We have now treasures and places, where they will be hidden. But we are lacking the heroes, that will be searching for them. Players have different color and there are three chests with tools for each of them, together with ten explored paths and adventurous character, or better top half of his body. All of these components are made of plastic, as well as a pile of rations. Components for individual heroes also include a large player card, which is double-sided and each adventurer (for example amazon or scientist) offer both sexes to choose from. Except for placeholders for tokens, you can find also three scales on these cards.

Each of the opponents selects one color and gets related character card. He takes also all the pieces of that color and distributes them to the designated points on his player card – pathways and chests. One of these chests is then placed under three columns, where improvements will be noted. His explorer miniature starts its journey in the base camp, where is also food supply located in amount according to number of players. 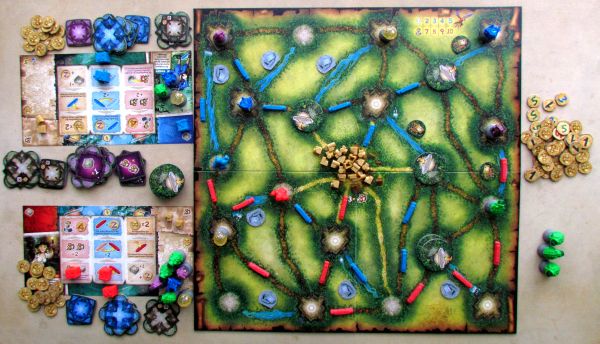 The most important preparation on the map are temples. Each of the levels is shuffled together and three floors are made of them, without looking at their bottom side. All these buildings are waiting to be explored during a game. Even ruins are free to visit, but order of its three floors does not matter, because they are all the same. Players also put tokens with boxes of tools on designated spots on the map, that will help finders in their quest. In addition to the game board, participants will create a supply of victory point tokens and especially relic pieces and game is ready to start.

When its player’s turn, he must move his adventurer to another location on the map. He can use paths marked on the plan for movement. Because he does not know it at start, he may move only to neighboring sites. During the game, however, he gets more and more familiar with the jungle surrounding him. He can then move on such a familiar trail (marked by pathway of his color) for free. At the beginning or at the end of his movement, he can then go through one unexplored section.

Only then he can finally explore place, where he arrived. If it is a ruin, player can now put one explored pathway of his color on any trail leading to this site. With its exploration, he gains awareness of the surroundings and facilitates movement for upcoming moves. By exploring a temple, players get its tile and can keep it for themselves. This can provide a one-time action or some end game points. 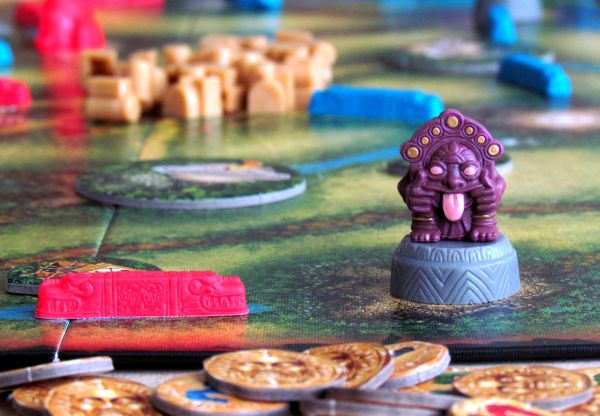 Adventurers can also run into the tool box along the way. In this case, you can turn used token with empty side up. He can now move one of his toolbox chest tiles one floor up in one particular column, which can be selected, when chest is entering columns from the bottom. Player may then take these actions at any time and such a move can lead to new pathway, victory points gain or adding a new toolbox to those columns.

Hunt for relics occurs only, when one of the temples is explored from the base to the tip. Player has to replace the last floor tile with statue of same color as is the temple located here. In order to obtain this relic, two of the same type need to be uncovered and player has to be able to move between them within one turn. For that, he immediately gets victory points corresponding to twice the distance traveled.

Game ends, when players gathered a predetermined number of relics together. Their amount depends on number of players, who participate in the game. Then everyone has chance to play last round and then it’s time for the final settlement. Players do this by summing up already accumulated points together with bonuses for relics and temples, which can give bonuses to end of the game for some relic sets. Player with highest score is the winner. 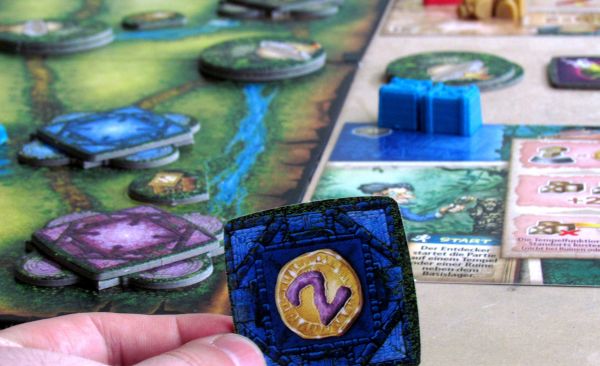 Relic Runners offer an interesting and unpretentious view on treasure hunt. Despite its simplicity, it maintains plenty of tactical options and choices, that await player at every turn. Everything begins with movement, which is always possible in several directions, based on player choice. There is no restriction in it and from every point on the map lead at least three trails.

It is up to the player, how well can he plan a path and connect the dots. There is enough ruins on the map and each of them can hold up to three routes explored. Heroes can move anywhere, but moving them along unfamiliar paths takes longer and slows players down. At the same time, it also decreases the competitiveness of the player, who controls the piece.

We have forgotten to tell you, that for every such survey, explorer has to pay a food token. It makes traveling more difficult, because you have to return to camp and recuperate from time to time. The game contains also chance to move some already played pathways thanks to the toolboxes, which can get you quick access to previously almost unreachable places. You can clearly see from all this, that the game places a great emphasis on planning and tactics. This makes a ten year old (a minimal recommended age) lose ground, when competing agains adults, as well as number of different bonuses of temples, that should be kept secret from rivals. 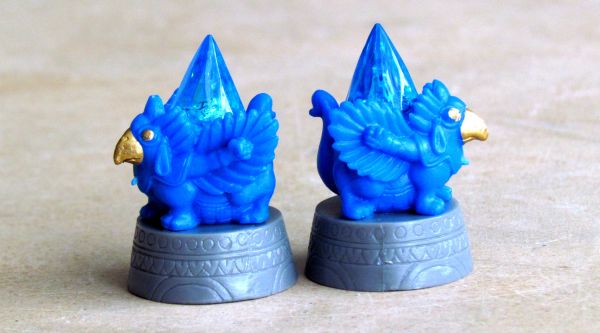 That does not change the fact, that Relic Runners are primarily a family game (but at least from 12 years, when children are ready) and it excels as such fun. Game is beautiful to look at, yet simple and has a tempting topic. You will hardly find someone, who would not like to try to play it after viewing contents of the box. Fortunately, gameplay goes hand in hand with the look and works really well.

We are also very happy for the game, because although game board does not shrink with number of opponents, it still all works quite well in two adversaries. Whole game is very reclusive despite the fact, that adventurers meet each other on the map. They will not harm each other that much. It only gets to one point, when someone steals relic in front of your nose and you have planned its grabbing for several past turns.

Gameplay is all about linking sites. This is clearly described in the rules, although we played it poorly in the first game. We thought you should be placing pathways on every movement, so we soon ran out of tiles and we found ourselves in a hopeless situation. Therefore, beware – a new path can be laid only at the moment, when you explore ruins! 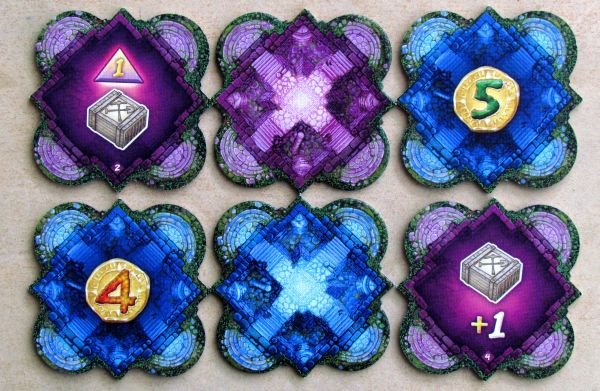 Atmosphere of the whole match is nice and its also because of its processing and multi-storey temples, that look nice, when built. While actual mechanics do evoke a feeling of a treasure hunt, but tool boxes and their special skills do not feel right in otherwise great sense of discovery and seizure of trails. Without these bonus actions, players are unable to adjust tactics, so their presence is vital. They simply do not fit so well into the whole concept and theme of the game.

Relic Runners is a nice family game, that is dominated by its looks. Its looks sweet as chocolate, but it also tastes good in the interior and you certainly do want to play it again. Intermediate rules ensure accessibility for all, yet are sufficiently flexible and tactically challenging. Relic Runners is yet another game, which perfectly fits into category “entry game for all those interested in board games”.

Relic Runners will put you into the jungle and allow you to find your path across the temples, which are hidden in its shade. You're doing exploration through a simple link, which allows you later to travel faster, but also to stampede with the found relics. Players must plan ahead very well, because their hero has to manage food and move faster, than others. The game is not about interaction and conflict, but players are still not bored during opponent's turns, because they can be planning their own steps. The game is so simple, that it perfect even for beginners, children may have a problem with a large number of bonus symbols on temple tiles. Atmosphere of the game is enjoyable and it looks really nice on table. Although it contains nothing new for advanced players, it may bring fun to them as well, because of enough tactical options to enjoy. Relic Runners are a must for each family collection, because it is another gem for less demanding play.