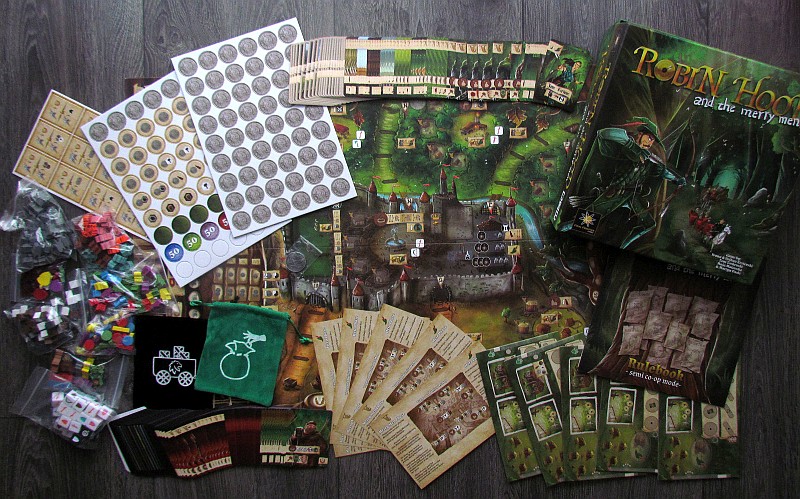 Do you want to become one of the bandits, who move elusively through Sherwood? Meet Little John, Robert of Loxley, or even Robin Hood in person? Then you have to prove that you have it in you and can ambush the sheriff’s men. But that’s not job for beginners. You have to shoot down the apple from the head of the man, who applied to become member of the Merry Men before you.

And players will also be welcome among the famous robbery in the board game Robin Hood and the Merry Men, prepared for us by designers Ivan and Vojkan Krstevski, Toni Toshevski, Maja Matovska and Martyn Poole. We know most of the names (except the last ones) from the previous Rise to Nobility game, which was produced by Final Frontier Games. Robin Hood, too, tried out the interest on Kickstarter and arrived in 2018.

There can be no mistake already based on the color of the box. The green square box is decorated with a portrait of the main character with an arrow ready in his bow. A caravan of soldiers accompanying a noble carriage is walking down the path. This is all happening as you open the box of this mainly strategic game, as players will recognize when discovering its contents. In the first place they find a big game board with a castle, home of the Sheriff of Nottingham. On the map, they should place figures of the sheriff, Prince John and Sir Guy of Gisborn, but also some guards. At the beginning of each trip towards victory, players place one randomly drawn carriage from the bag on each road and a set of coins in a similar place next to it. This is wealth of those, who ride in it. Then they prepare a supply of raw materials, dice, weapons, puzzle pieces and cards. 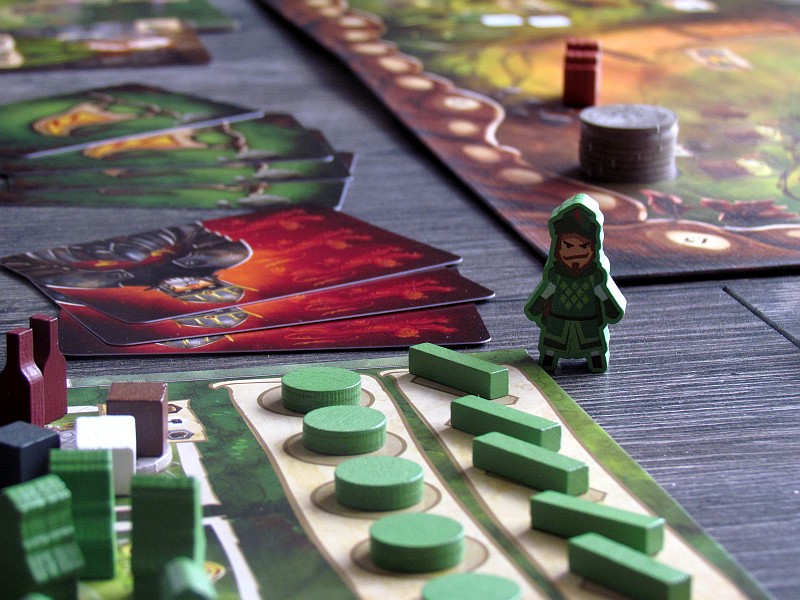 Players get four family cards out of the shuffled deck and start their preparation. They will each receive game board and fill their warehouse with starting materials. Each opponent chooses his hero, places his wooden miniature on the board, and also receives a corresponding card. Above all, however, players receive their party members, barricades, traps, point indicators and reputation, all in their chosen color.

The game is divided into five rounds, in which the players gradually go through all the phases. It all begins with a collection, where players try to use their team members (six figures) and collect as many resources as possible from the available six locations. But in order for one of the bandits to set off on the road, it is necessary to play a card with the corresponding action. The player receives the resources listed on the card. Then the figure can jump on the plan and hide in its target location. Instead of doing so, the player can put the card on a passive stack, where it can later be moved between the active cards or set off with the piece in the main area (not in hiding) to retrieve the resources according to the icons on the plan. 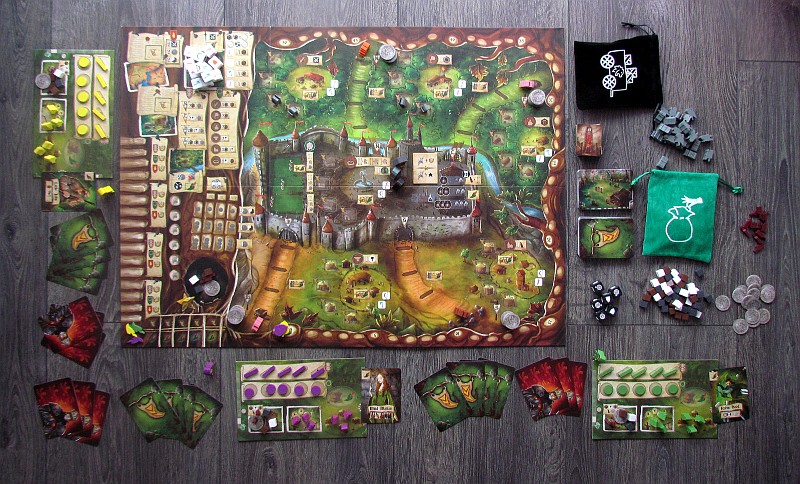 One of the classic places is also square, where it is possible to rob rich people with the help of dice. Even this collection needs to be activated by the card, just like the others, but to do well, you must also succeed in a roll of the dice. Players can even try luck and throw several times for bigger reward, or at any time settle for current prey. If the player does not throw the required number of successes, then the piece will head to prison and awaits his sentence.

Another option is to build a trap or barricade. They will come in hand in the second phase of the round, when the game begins to revolve around the carriages. Trap is placed on the hideout, a barricade on a chosen path. The player will be rewarded for their effort. In addition, rivals can also send their envoys to King Richard’s Court to earn valuable victory points. In addition, they can also perform the tasks, they were given at the beginning of the game.

When each participant sends three members of his party, then the end of the phase happens. Second part of the round starts. Its called the Heroes’ Phase. At the beginning, each player draws two dice of weapons, keeping one and moving the other clockwise to the neighbor. Then, one by one, he draws out one bad guy card, adding the pieces to the locations on the plan and moving the carriage above all. The Ranger placed by the players either occupies a free space in the stash or can capture one of the party. If one of the carriages manages to reach the castle, the player places it in the stable and removes a few coins from the path as it has escaped successfully. Moreover, if the stables were filled, the carriages would move again. 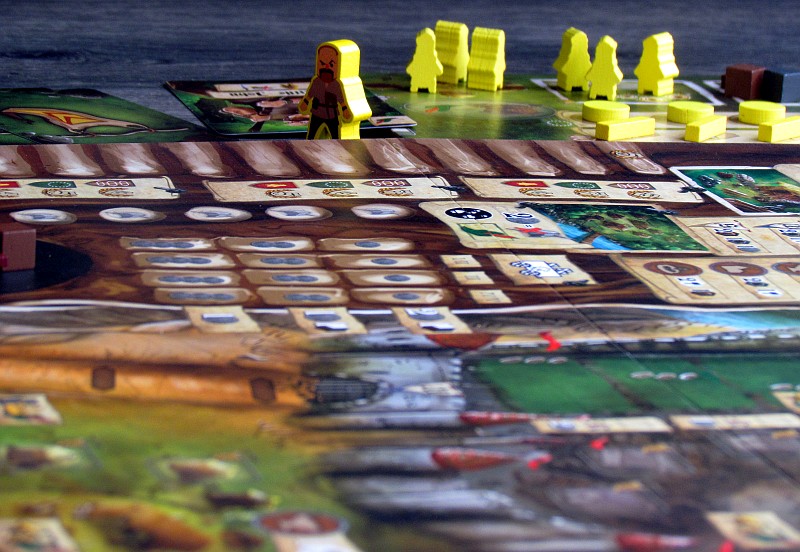 Players can now defend themselves and send their heroes into action. They can go with them to one of the fourteen available locations, twice. It is possible to attack a carriage, fight with guards, try to escape from prison or take part in archery competition. You can earn a reputation as well as victory points. Everything uses dice to determine success or failure. Instead, it is possible to give money to the poor or to equip yourself with a new dice for upcoming round.

Once everyone has done their two allowed moves, the round ends. Players are returned to their party (except the captives) and the game continues with the next round. Everything repeats until the required number of rounds has been played. Now, players will add score for reputation, traps, barricades, envoys, property and retinue to their accumulated points for heroic deeds. He who has the most of them, becomes the winner. However, the game can end up by everyone losing, if the supply of coins on the road runs out as a result of carriages, that have arrived safely at their destination. 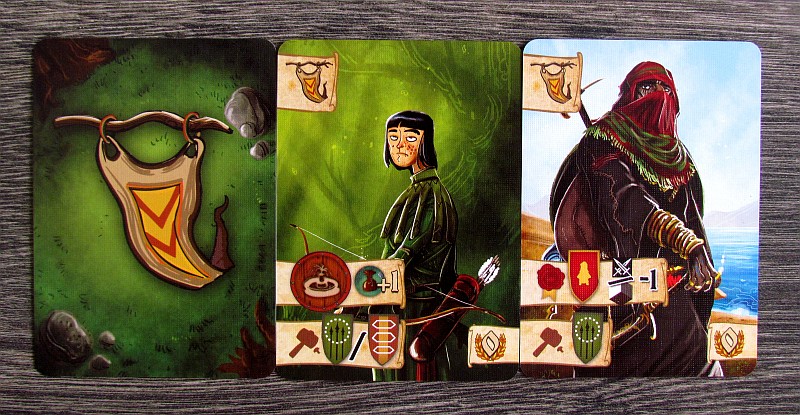 Robin Hood and the Merry Men is an interesting mix between worker-placement and a thoughtful battle with the enemy. Players have to work together to slow down the carriage progress for most of the game. Their failure would mean that everyone would lose and only the Sheriff of Nottingham would be happy. And it is clear that no one wants such a thing, even at the cost that he might lose himself. That is still better than letting a treacherous villain win.

It is clear that most of the players will be drawn into this game by its theme. The fight against the sheriff of Nottingham and his minions remains an important element around which every turn and every step revolves. Guards are hiding at every corner and send players to jail. This is a very unpleasant place, not easy to escape from. It always carries some risk.

For most of the more action parts of the game, players use dice. And this is a source of tension, but also of problems, because not every player will be fond of combination of dice and tactical worker-placement. Surprisingly, the game is quite random. 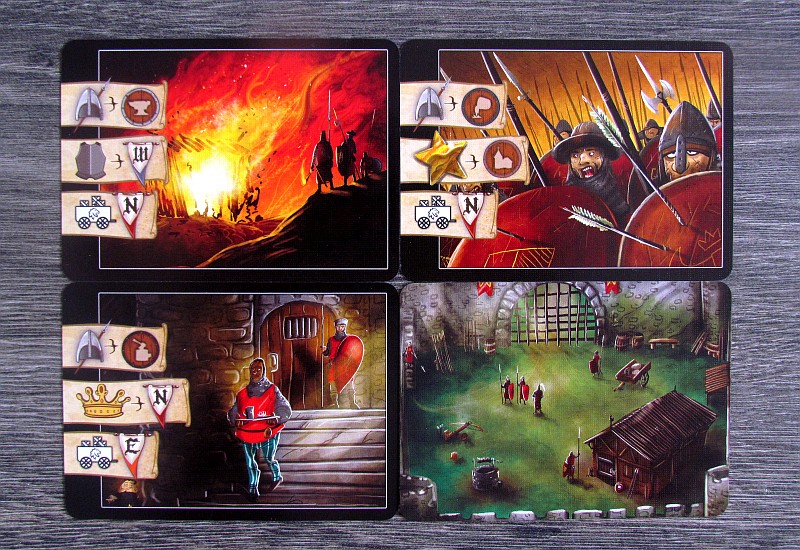 The main mode you should play Robin Hood in is the semi-cooperative base version. So the game was originally intended to be played. Players think of their points, but at the same time debate and try to stop the carriages craving for safety. In the outlaw game, there are only as many coins as hiding in the pockets of the passengers, and with each escaping carriage some of them disappear.

But in addition to the rivalry, Robin Hood can be played in a completely cooperative (or solo) mode. The goal of the players is then not to lose for the prescribed number of rounds, and within some difficulty, when just the cooperation of the basic version becomes the main content. The fans of the cooperation will probably appreciate it, but in general it can be seen on the game that it was intended as a fight for points. 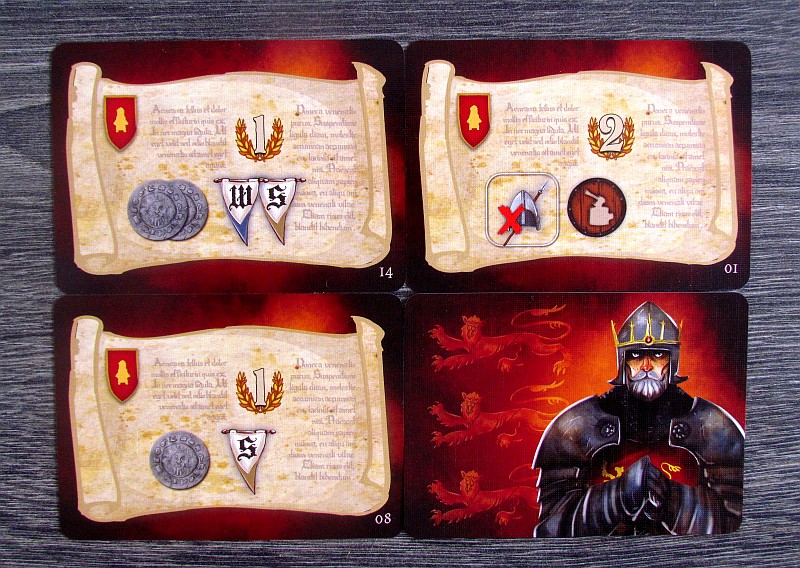 Because the game has a relatively unconventional approach to a combination of genres, unfortunately it also brings a lot of rules, the small ones. It is not at all easy to keep track of everything in your first game and not to forget the individual steps to take. You will often flip through the rulebook and find small questions.

Some ideas in the game are really great. It will not only delight by doing classic stuff such as drafting dice and incorporating them. But mainly these are ideas with passive and active cards, which offers two ways of using. But most of all we like the prison element mentioned above.

Unfortunately the game is very long. Although at first glance, it has only five rounds, within them (especially in the second part of the game) happens so much, that the game just last too long. In addition to the tactical points-based game, the participants also have to make a deal, debate, and that stretches everything. Game easily reaches ninety minutes thanks to this. 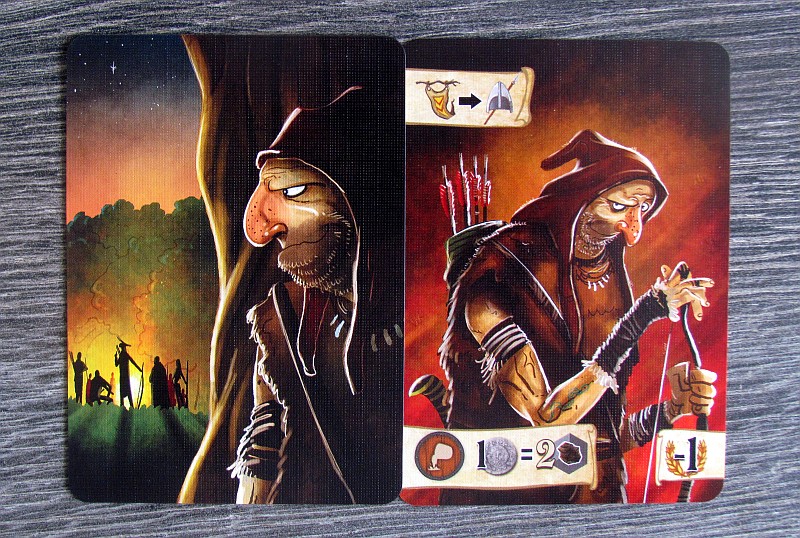 The processing gives an excellent first impression. Unfortunately, as you dive into the game more, you begin to discover flaws. The first is a poorly set out rulebook, whose texts go beyond the other side. But everything is in the rules, including illustrative examples.

Robin Hood and the Merry Men offer plenty of opportunities for players to send their pieces to on each turn. But all this must be also combined with cards in hand and especially with negotiating with other players, because the approaching carriages are a danger to everyone. The game is dominated not only by tactics, but also by luck in dice. This combination of control and luck is not very popular, but if you like tension, then you will appreciate it. Robin Hood and the Merry Men have a great theme and know how to sell it.

- chance
- length of game
- a lot of tiny rules to remember

Robin Hood and the Merry Men is a pleasantly original and interesting game, but you must not expect too much control over the overall result. The whole half of each round is controlled by dice and their results can be minimized only by increasing the number. The game is quite complicated thanks to a lot of small rules. But the theme and originality of some ideas means, that Robin Hood and the Merry Men is game definitely worth a try. It may not be everyone’s sleeve, but it can surprise you as well.

by Dušan on 02. 09. 2019
They just put us in the ring and said “Fight”. They gave us no reason, excuse or motivation. The winner gets nothing, but the pure feeling of [...]
Comments
Leave a reply