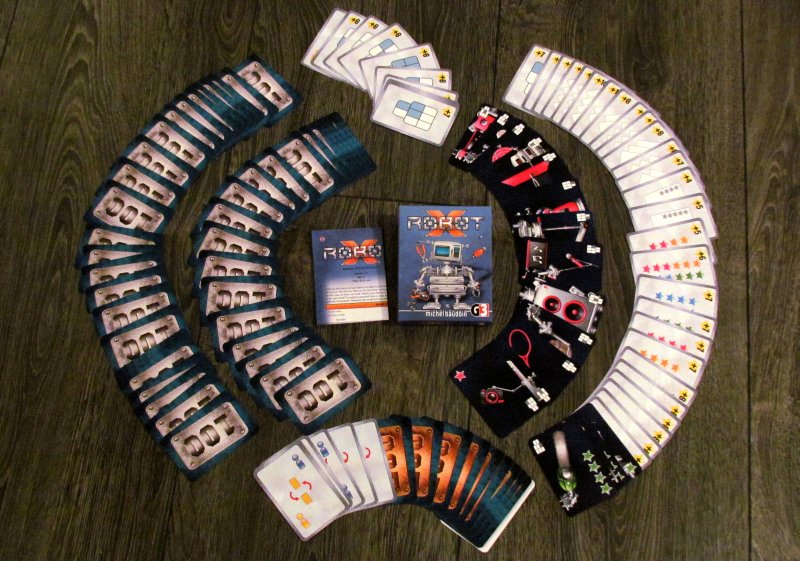 My purpose is to organize everything. Every speck of dirt is my greatest enemy, that must be destroyed with broom, vacuum and damp napkin. These are my deadly tools and I use them every day. I have accomplished several dust-free days in my home. I am a record holder in the contest for the cleanest door-step. You already do not know, but you need me. My name is Robot X.

In the world of card game Robot X, robot cleaners are reality. So we can marvel together at their creations, that was prepared by a Dutch designer Michel Baudoin. His work was illustrated by Sylwia Smerdel and it was released on the market by G3 company.

Small box has such one robot for everything on lid. He has screwdriver for swirling dust, pliers to catch it and a light to put some light on it all. No, I am kidding, of course, robot on the cover will probably serve as a mechanic. It’s up to the players, what specialization they choose for their robot. 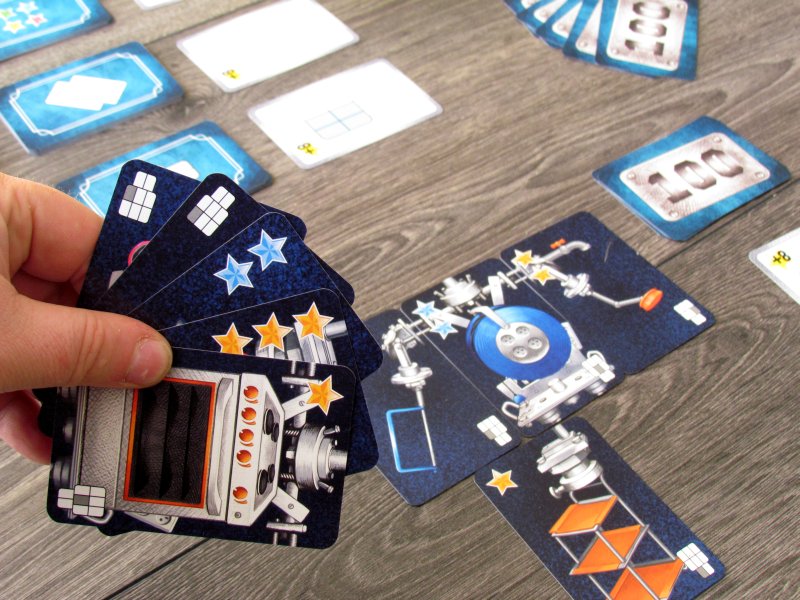 They will need cards to do that. There is a total of 117 of them and 64 of them shows components for a robot and some star value of that particular card. Rear side of the card shows value of hundred credits. Nine other bill cards represent a different and higher values (also with 100 credits as their back, so they look alike in player’s hand). We will also find eight events in this deck. All these cards together constitute the basic cards deck. That leaves us with another three dozen cards, which can be divided into three equal packs. Each such card provides bonus points, whether it’s for some of the robot’s body part or stars on the cards.

Players now take all basic cards, not just robot parts, but also money and events, shuffle them well and deal seven cards to each participant. Rest creates drawing pile near center of the table. Bonus cards are split into three packages by their back, each is shuffled separately and one card is revealed next to each of them. These are scoring conditions, that can be acquired at first.

Each round, players will alternate in turns, which always begins by drawing a new card from the joint package into hand. Then, active player has to immediately decide, which one of those cards will be put aside into his treasury (a pile in front of the player). He places the selected card swith backside up, showing value of 100 credits. It can no longer be used by its owner to any other purpose, than payment. 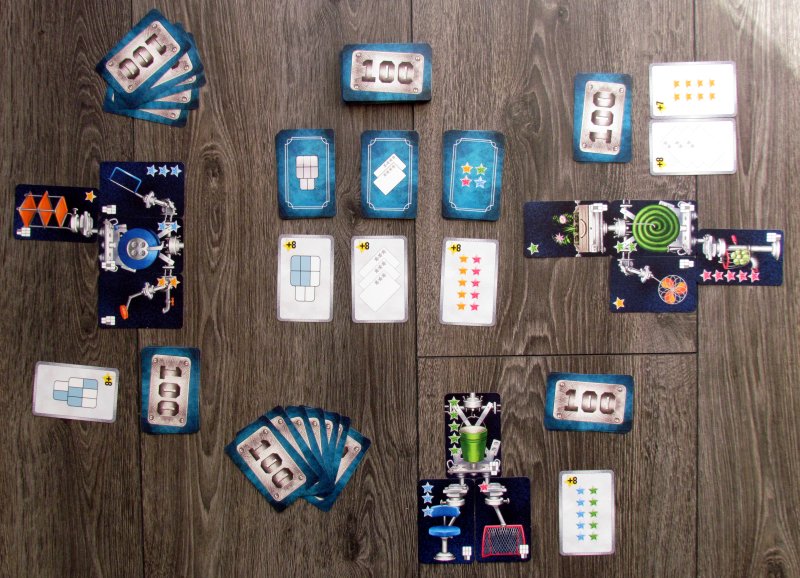 And now we come to main phase of each round. Player has to choose another card from his hand, because he will offer it to others in an auction with a starting price of 100 credits. But he alone might (and will) also bid on it, because he can gain chance to add it to robot only like this. So all participants gradually bid until the moment, when the winner is clear (others do not want to raise price). It can also occur sometimes, that no player bids on card. Active player gets this one for free. Otherwise, the winner of the auction pays active player half the auctioned price. These credits are placed in his bank.

Auctioned card does not go back to hand, but instead, winner of the auction has right to use it immediately to build his robot. It can consist of a total of eight cards – head, torso, arms, legs and ears, and each of the rivals can only have one robot in front of him. In the event, that player has won in an auction card he already has placed, he can decide, whether he replaces it with the newly auctioned card or one. One of this pair then must be placed in his bank and therefore provides a financial bonus.

At the end of their turn, players may buy any of the revealed bonus cards for raising costs. These cards are placed beside robot and will wait for the end of the game, when they brings some points to their owner. At this moment, player can also use one of event cards he may be holding in his hand. It allows him to attack his rivals. 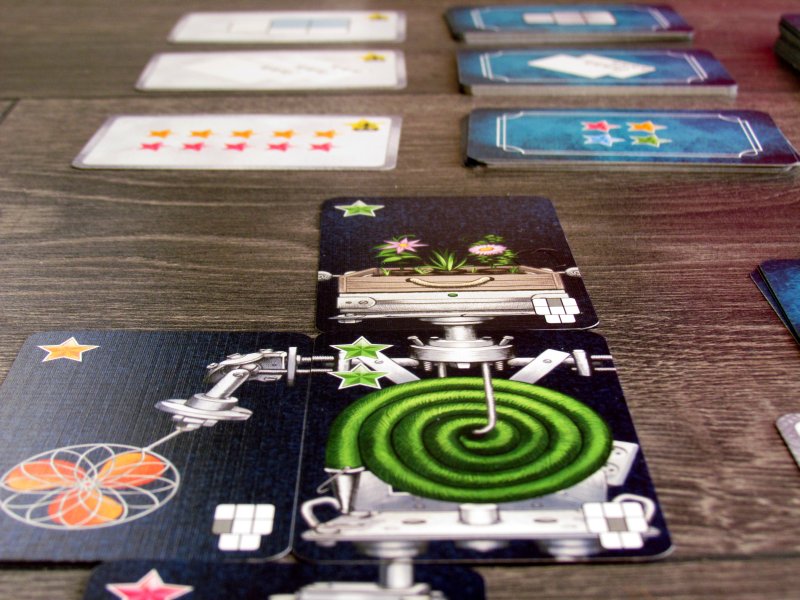 Game then continues turn by turn, but only until the moment, when first player completes his robot. It even might not be completely ready, because ears are not essential for their service to humanity. This means, that placing six different body parts (each card has its own location, as indicated in its right bottom corner) is enough to end the game. Players then multiply number of stars by numer of different star colors on their robot and adds bonus points for cards. Whoever gathered most points is the winner.

And we really like Robot X. Say what you want, but this game makes its point and works well just as it is. As simple as it may be, it maybe just arrived to us at the right moment, when we were in the mood for building robots. Since then, we have played dozens of games, that are quite long. But are also surprisingly lenghty for a fact, that its purely a card game. We are talking about some 45 minutes. 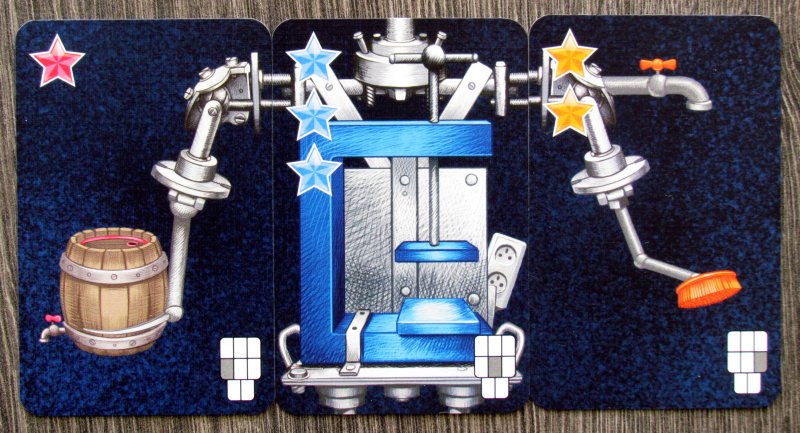 It is true, that towards end of this time, game gets out of breath. But building robotic pitchers or crazy fresheners is really worth it. We are talking mainly about auction phase, which is exciting. It is really the only way to mount a new component on your robot, so players have to offer to others parts, they want just for themself.

It is important to monitor state of other robots. Sometimes, it is possible to offer components, that others already have and hope for it to pass through unnoticed. But still, you can not be sure, that someone will not bid and construction might cost your dearly. It is also very tricky with finances, because there is not enough income and if you spend too much, you will miss credits in subsequent rounds.

Besides auction, interactions are also very important. For example, it is possible to collect cards from all participants, shuffle  them and then distribute them equally back! This is particularly interesting in a situation, where you are low on cards or have bad ones.

Robot X is magical by not limiting you only with cards in your hand,  when buliding a robot. You can auction off any components, that your rivals offer for auction. Sometimes, it may be the only means to get funds for the next round, but sometimes players will fight hard for these components. Auction is the only way to mount it on their robot. Robot X is very pleasant and entertaining game, that brings surprising moments and still has not enough attention.

- longer for a card game
- loses breath towards the end

Robot X is a game, that lets you unleash your imagination. You build a robot, but it is not easy to attach cards. Fact, that you are holding a card in your hand does not mean, that it can be used. It must first go through auction, where all participants might bid. You might be limited with selection of cards, but creations are crazy enough to entertain even for twentieth time you play. Game is cleverly conceived and is surprisingly undervalued, while it has potential to really provide a good time. The only significant shortcoming is perhaps a long playing time. So what? Do you want to take home also one of those robot cleaners, codenamed X?