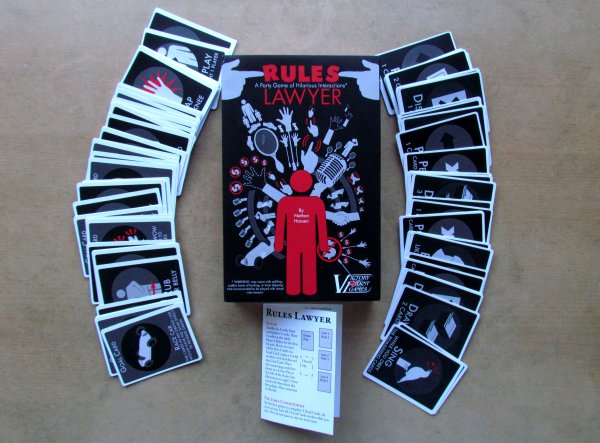 I’m sure, you’ve met people, who like compliance with the rules to the last dot. How should you name someone, who monitors, whether all the principles in board games are followed? Rulecop? But there is maybe even a better callsign in English – Rules Lawyer.

This is also name of new game from Victory Point Games and its author Nathan Hansen. It was published in 2013 and illustration, that fits the theme of the game perfectly, were taken care of by Alisha Klein and Barry Pike III.

Game is hidden in a red cardboard box, but it is wearing a black wraparound as a scarf. Maybe so lawyer was not cold. But more likely reason is, that each buyer can read the game information on the packaging and to stood out well on the shelf next to other games of achal VPG series. 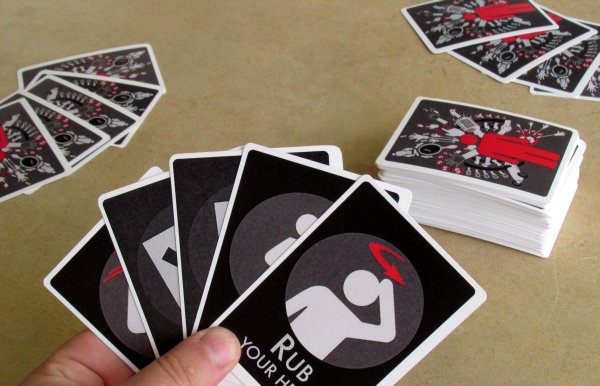 This time we cannot expectany laser cut pieces to punch out, but only a silent and inscrutable pile of cards. There is a hundred of them and otherwise empty (but fortunately relativem small) box is accompanied on the road only by rulebook. But there is particularly not as much text either, so its not good companion for long trips. Rules are printed on a hard folded paper and you read them in five minutes. No thorough reading required.

To read our review further, you perhaps would expect us to explain, how to play Rules Lawyer. So you are not forced to read rules at all, when they are so short. And you can then also say, whether you have interest in purchase of this creation. So we have hundreds of cards, which consists of only twelve goal cards. At first glance, you cannot differentiate them from others (they have the same back), but on the face is a clear text at the top: GOAL CARD. Collecting them can win you a match. All other cards contain some commands (= rules), which you have to keep without errors.

At the beginning of the game, you simply shuffle this hundred ofcards well and deal five of them to each of your rivals. Next free cards are then turned from the deck, while rest remains as a drawing pile. You have with help of these three cards now created an initial set of rules. If any target card appeared among them, you must replace it with new one. 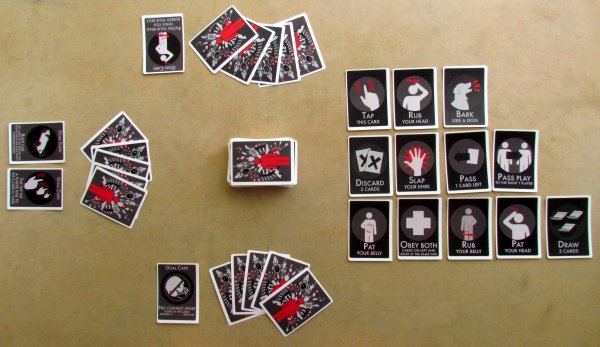 Now everything is ready to play. At the beginning of his turn, each player first checks number ofcards in his hand. He must hold exactly five of them, so he can either discard some or vice versa draws from the drawing stack. Then a pair of actions can be done, but there is a choice of four activities.

All options players have, are touching trio of laws, that are lying on the table from the beginning. So far each of these laws consists of only one card, but each of them can grow up to five rule cards, that make up one of the laws. Using actions, aktive player can manipulate cards in the game, may switch them, move, take them into his hand or rather play a new card from his hand to any law. Only restriction is, that he can never discard last card of the law, which would completely eradicate one line.

Once the player has used up his two actions (he may not necessarily do both), he must now meet requirements of all aktive laws. This means, that he must abide them. In the best case, it will force him only to draw, switch or throw away cards. Often can there be also some special action from snapping with fingers and scratching his head, through clapping, barking up to slapping his knees. 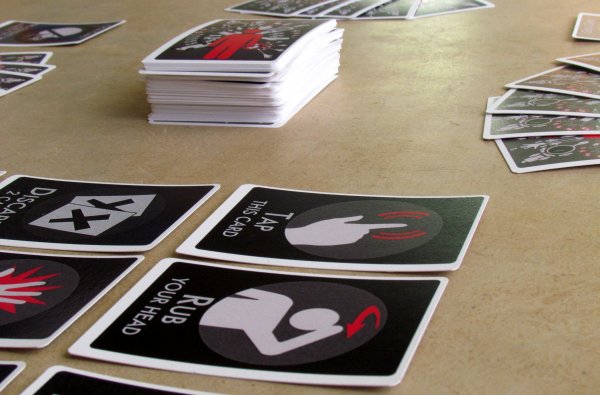 But game is striving for fun among its players, you will also find two rule cards, that affect surrounding rules. One of them will tell you to do order next to it multiple times, while second card bears a big plus and combines two activities into one. You must therefore be for example barking whales scratching your head.

Laws are changing gradually and you have a solid chance to influence them, so that it suits you. You finally need to complete goals, which you are holding in your hands. Only once you succeed, you can show card to others and score it by putting on the table. You can lose cards just in case, you follow the law incorrectly. Tasks typically combine multiple cards in one act together, so to complete a mission, you have to give away your cards to others, clap three times or even sing together ten cards.

Player, who fulfills three tasks as first becomes immediately winner of the game. The others have no chance to react, no matter how close they are to winning. In rare situations, more players may win at the same time, because you can win even during your opponent’s turn.

Rules Lawyer is a very simple game, that focuses mainly on atmosphere and entertainment. Actual mechanisms are a little aside this time. Players themselves are getting behind the wheel of this match, with their actions and watching of others. Unfortunately, we recently had the opportunity to test the game Reaction (published by Piatnik in Czech), which also puts players in front of various rules and succeeds better in its task.

Variability of cards is not as great as it could be. With the exception of knocking on the cards, we have already mentioned perhaps all of possible actions. Clearly, need to achieve a balance between goal cards and the chance to meet them is reason for their limited number. Combination of individual activities is still the main thing, what this game is about. Yet we simply think its not enough, especially with regard to repeated play.

Game reminds us of a little messier Fluxx (review), while with a loose fun of Reaction. The same is true, when luck kicks in in both games. It has a large impact on your chances. But victory is again only a by-product, mainly because you play this game for fun.

Some tasks are not comparable by their difficulty. For example, drawing up a card, that forces you to sing ten cards in the series is much more difficult to build, than three cards with barking. Here again, we must return to luck, which has a crucial influence on your success. If you do not get right cards for the task, you do not stand a chance. You can only hope, that others will help you. You do not know, what tasks have your rivals and therefore can not spoil them their attempts, you just wait until you finally draw some better card. This is especially annoying in a situation, where you are missing one last card for victory.

Rules Lawyer started as a very interesting idea. Chaos of constantly changing rules and yet variable assignments in the style of Fluxx. It all looked good, but a couple of mistakes in the concept makes the game only a mediocre party entertainment. Replay value is relatively low, and chance has a greater impact on the game, than even such a light game should have. Too bad, because complying with the rules and laws is otherwise good party fun.

Rules Lawyer was trying to find its own way to fun. It took rules and attempted to make them into tasks for players. They have to follow them at the end of their turn and follow their every word in precise order. Such a series of tasks is called a law and their combinations create the only path to final victory. Unfortunately, the game is not only luck dependent, but also lacks enough different cards for laws. Although there is quite enough goal cards, but matches feel still too similar. Chaos in this game is fun, just like the atmosphere, but different laws have different difficulty. And number of these accomplished is deciding about winner, which is quite unfair. Road to victory or loss is both fun, but its unfortunately not enough to bring the game even to average party games. Rules Lawyer stays half way with its original idea.