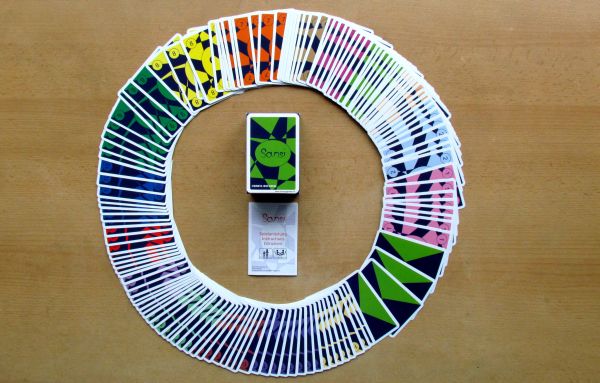 When the cards are hiding in a box, they are mostly just talking with their peers. So kings are talking with kings (and occasionally fulfill their marital duties and tell a sentence to their queen), tens talk to tens and fours to fours again. Sometimes, this functional hierarchy may be affected by the colors they carry, so if ten of diamonds has not any other ten near, it is willing to talk even with an other diamond card. All cards of the other suits are only “the others”.

And what if we now take all those little cards and mingle with them a little? We add more numbered cards and remove the named cards completely. These numbers will be easily distinguishable also with color. Do you think they will behave similarly and will again find their equals? Probably yes. You’ll see in a card game named Sansi.

Sansi is a card game published by the Swiss publishing company Murmel on behalf of Tensor Games. Game is designed and developed by Cheryl Heusser. Its sale has been launched only in the domestic german countries, but if successful, it will certainly expand distribution to other countries. So we are ready for it, we will now look closer at Sansi and the way it is played. 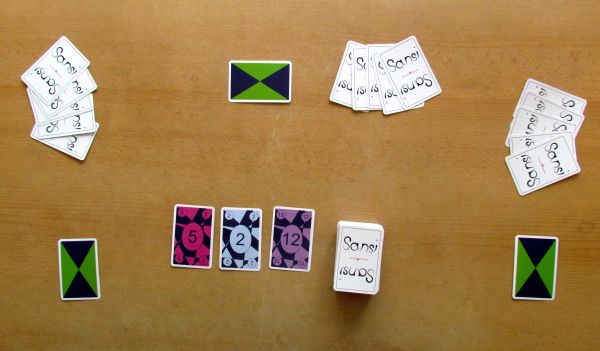 All card game can be found in a relatively small green box, which is painted with geometric shapes. You should be impressed with the box thickness, which indicates very respectable number of cards. And if your eye detects this, you are not wrong. In the box, there are 128 (16 × 8) cards located. All of them are covered with numbers from one to sixteen and split apart by the color different for each of the numbers. And yes, hopefully they are all quite far from each other to distinguish them in all sixteen shades. Unlike traditional cards, with these cards the number division correspond with colors – so sevens will always be orange and twelves blue.

The box contains also up the rules written on a small piece of paper. These are only in German, French and Italien, so we had to engage the one and only german-speaker in our newsroom. And it went well. The rules are simple and because you will get rapidly into the blood.

And now, when we come to preparation of the game, we must say, that in addition to 128 cards, you will find four others in the playing deck. They are at first sight really special – they look the same on both sides and have drawn a rectangle divided by diagonals into four triangles. The opposite two sides always have the same color – one green and one dark blue. We will call them “ordering cards” for simple orientation of you, our readers. 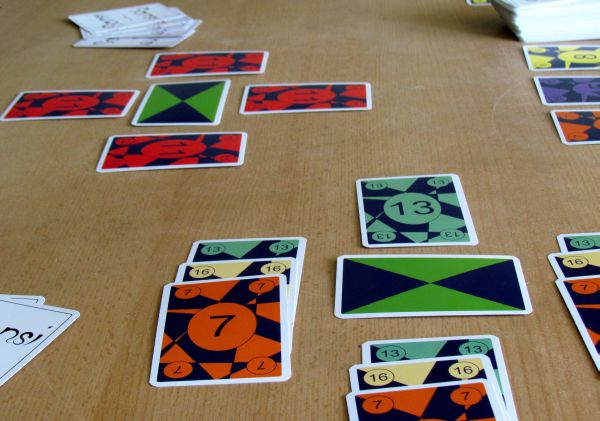 It is these card, which players receive first in the beginning of the match and put them ahead. This is the place, where they can play cards from their hand during a game. They begin with hand full of five other cards from well-shuffled deck. The rest of the package lays out the center of the table. You take three cards from top of it and put them in a row, so they are easily visible to every player in the game. Players then can look at two, three or four cards, which will they be able to pick up in a minute.

You can now start the game, but before the whistle blows, it is important to mention one crucial fact. The whole game of Sansi, everybody plays at the same time and everything is spinning around the quick reflexes and decision making.

Players try to pick up and gather in their hand at least three cards of one number (= color). They do this by changing one card from his hand as one that lies at the center of the table in menu. 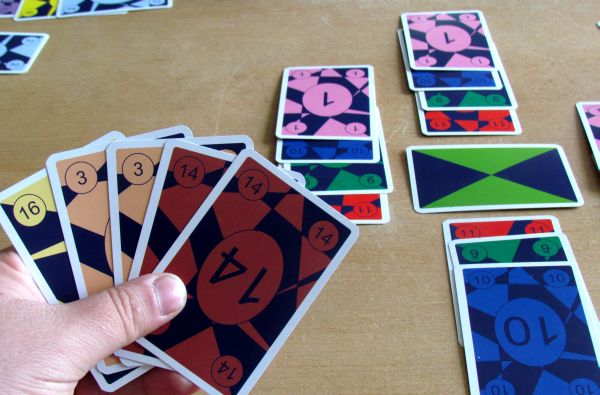 Whenever you have a set of numbers ready (three or four of a kind), you can play them straight on a table around the “ordering card”. On each side of this card, there should rest one specimen of played cards. Because this is the first set you gathered, that concludes your actions and everything is allright.

If you manage to pick up another set of numbers, you would put it normally on the cards, that you played before. Yes, that is correct. And you should do it so, that those lower cards numbers can still be visible in the upper or lower corners. It serves as an easy overview of how many cards of which colors are already in the game. But playing of these new sets must follow one hard and strict rule – cards must stay in the same order in all four piles and cannot be reordered at any time during the game. That means,if you play three cards in one step and leave the fourth space blank, you should not put any card in the fourth place, unless you succeed in finding the fourth of the first kind.

The game ends when the cards run out drawing package. Now, players count the number of completed sets – the four get two points, one point behind the trio. The player who won the most total points is the winner. 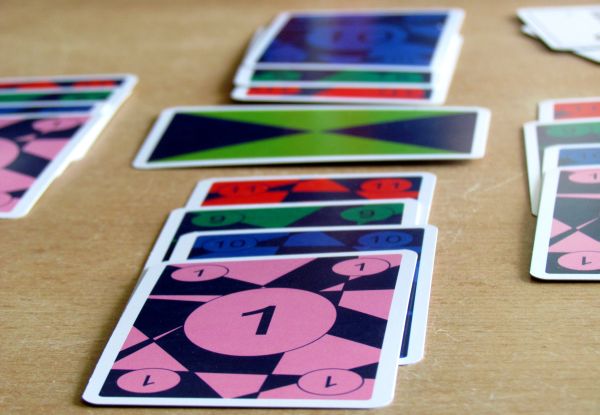 Sansi reminds us a little game of Yamy (review available only in Czech) from Gigamic, that has gone off chains and allowed the players to move freely and play anytime they want. But unfortunately, while the aforementioned game thrives from randomness in card collecting (and shuffled deck), does not mean, that it will work here.

Because in real-time, this randomness is just simply aggravating. The player must decide now and only now, what to do with the card, which he should keep and which is going for an exchange. Because the time flows, you do not have any time to reflect any sort of tactics. Everything runs very quickly and sometimes even before you take a breath, everything is different.

Of course, this chaos is one of the bright features of games, that are played simultaneously. For example in Galaxy Trucker (review), the common part is the funniest one. And even fans of perception games will surely find taste for Sansi, because it is a lot like Ligretto (review).

The very principle of the game is cleverly devised. You must always decide, if you still keep the three cards in your hand or you play it. It the first option, you may block your table and “ordering card”, because you will have to wait for the fourth sometimes in the future. Not to mention, that when you play the three cards, teammates suddenly know, what card are you really going for, and will try to take it for themselves. 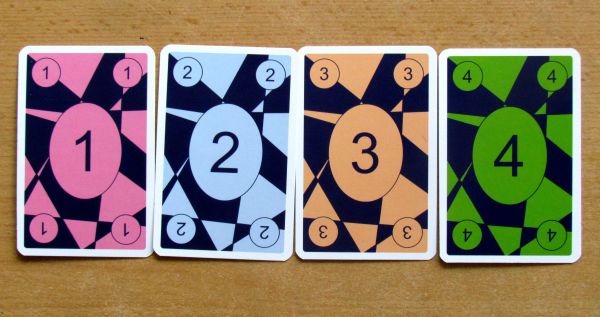 This is the greatest weapon of Sansi. Players uncover plans to their other opponents, sometimes they pay for this, sometimes not. Remember that players can change their cards, so players can play card, you wanted. And now, that you revealed your plans, they wont throw it away for sure.

Going against the very uninteresting numbers, there is protection in the form of the scream Sansi. This can be appropriate in case, that you no longer need any of the cards in the offer, so you can change the entire menu. Sometimes this decision can also upset the opponents, who might needed these cards for their plans.

Sansi is an interesting card game, which shows us a limit of games played simultaneously. For quick play with the children, this is an interesting extension of your game collection. But do not count with any strategy in this game. It has no place here. Everything depends on the speed and luck. If you do not mind, then Sansi might be for you.

- rules only in German, Italy and French
- it depends only on chance

Sansi is a card game, where everybody plays simultaneously. By exchanging cards in their hands with offer in the middle of the table, players try to gain three or fours of one kind. They may then put these sets in front of themselves. The magic lies in the rule, that until you do not finish one set, you cannot put others in empty spaces. You have to not only risk, but also think quick and above all have luck on colors, which will come up. If you are unlucky, you can run for it with exchange of the whole menu. Rules of Sansi are available only in German, French and Italien and the outcome of match depends on luck. You don't mind? Then try Sansi, because it is one of the better games, which are played simultaneously.