Review: Schatz Rabatz – how many pirate treasures fit into one chest? 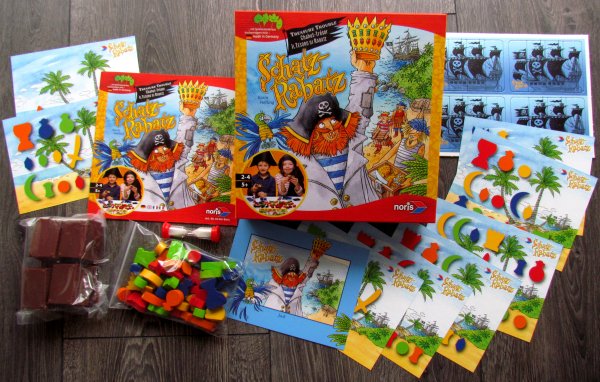 From the deck, it looks like any other island. But appearances can be deceiving. These palm trees and sand are just a hypocrisy, because island is full of gold and jewels. Somewhere in the shadows, treacherous Jack is hiding, who will not let anyone back to the boat easily. Captain brought his best robbers with him to steal that gold and promised ship to the most successful pirate for one chest of gold.

And who would not want his own boat? Irresistable offer and chance to join those pirates on their quest? We can fairly easily pick up a box titled Schatz Rabatz. Board game, whose author is Karin Hetling and all pirate illustrations were prepared by Johann Rüttinger. Box was published under the brand name of Noris Spiele as a novelty for 2015. It has also been just nominated for Children Spiel des Jahres 2015.

Packaging belongs to medium size, neither large nor somehow extremely small. In fact, red-haired pirate is in charge of this whole content, standing on the lid guarding. Actually, almost the entire island is in there. And our trip to the sandy beach begins with rules, where one brochure contains several languages. Like everyone else, we too were soon looking for treasures. There is a total of forty wooden pieces – eight types of five, each piece in a different color, each unique. 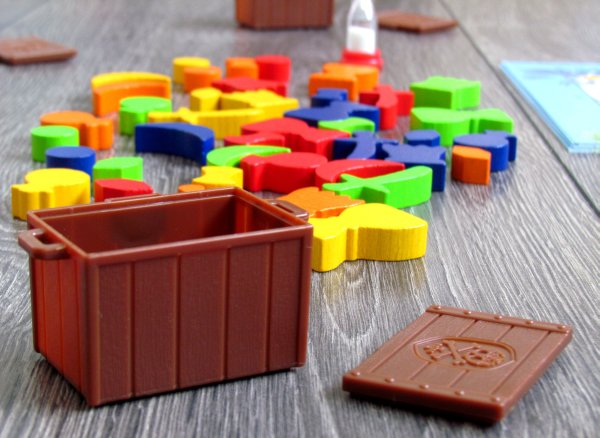 For a successful visit to the island, you will also need a chest. They are large and plastic, with removable lid and stamped with a skull and crossbones. But we do not take the warning seriously and continue our visit towards another discovery – punched out pieces of cardboard sheets, representing ship chopped into four pieces. Jack demands are represented by nine large boards with pictures of treasures and all complemented by hourglass for measuring time to visit the island.

At the beginning of the game, each player takes one chest. All treasures are neatly spread out in the middle of the table, so everyone can reach them. Boards of Jack have to be shuffled and placed face down. Besides these, players spread also broken pieces of ships split according to their illustration on the back.

All rounds take place in the same manner. Players will start a treasure hunt, once one of them gives out the order, everyone starts to fill their chests like in a race. But they must think, that chest has to be able to close. They should therefore be very careful, when piling up treasures inside. Some gold pieces are more interesting than others, and because everybody plays simultaneously, it is understood, that the smallest disappear first. 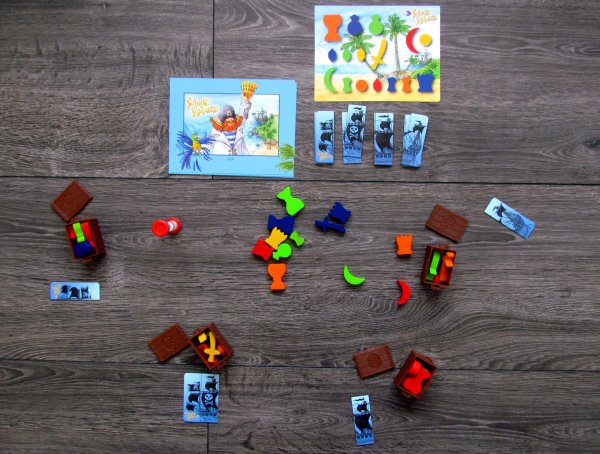 Together with start of the round, it is necessary to also turn the hourglass, which measure time for each round. When sand expires, players must let their efforts and try to close their trunk. If they can not, they must postpone treasures until the lid has clicked. Only then can players one by one appear before Jack and let him check their catch.

One of the players reveals board of charges, empties his collected treasures on the table and sets aside everything, that Jack wants (printed on revealed Jack board). He can keep the others and uickly escapes to the ship. That does not mean, they are closer to victory and a private boat. Only one of the players managed to take away most treasure and that one can pick up one ship tile. In the same way, further expeditions on the island are carried out until one of the opponents succeeds in collecting all four ship tiles. This player is the winner.

Schatz Rabatz is your ticket between greedy pirates. Even the players themselves will feel such temptation for gold. But it is their nature now. Yet, only the fastest can win it all. Individual treasures have quite naughty shapes. Players must skillfully put pieces together to make them fit as much as possible into the coffer. And because it is a game for children, you surely now see all the positives by yourself. Playing will train space perception, dexterity and a good estimation. Everything you need, when you pile up treasures in a limited space. 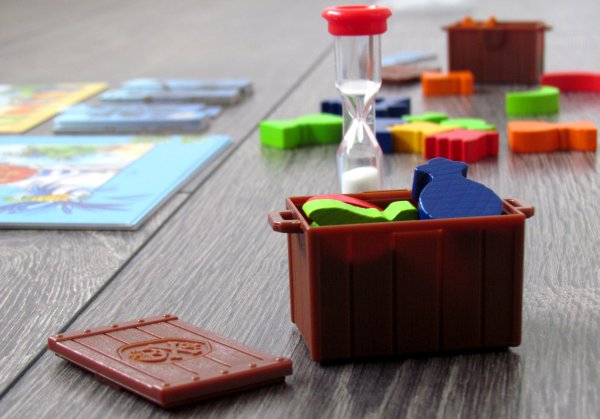 But it does not work any other way. What a pirate does not take away in a chest, its like he never had it. But on his way, there is still one more important hurdle, which is quite random in the basic version of the game. Younger children will not mind this fact, that they really can not plan and affect, how much treasure will come to insatiable Jack pockets.

Thanks to the simple mechanisms, game can be further enriched by other ideas. One we used was a punishment for excessive greed. If the player fails to close his chest at the end of the round, he must not only remove treasures until it can be closed, but exactly twice as much treasure pieces.

Rules of this game are really very simple. That is the reason, why even children from five years of age can attend hunt for treasures. For them, it is possible to increase time limit of hourglass, so that they can better concentrate on composing treasure chests to or even totally remove the sand. 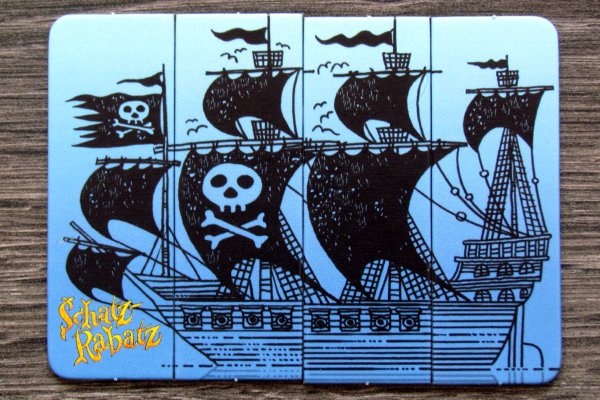 More demanding players may added planning into the game. Jack´s upper board is exposed from the beginning of the round, so everyone tries to avoid prey, which he would certainly lose. Actually, no one is forcing you to pick up these gems and you simply would not take it into your chests, because you would lose it anyway. Here again, game trains color and shape recognition, but it works better with the random board revelation.

Because they all play at the same time, it is immediately clear, that the game will be fast. And we will confirm it and have to give you a number. Battles lasts for about fifteen minutes, during which everyone is always in center of the stage. Even evaluation is interesting, because opponents have to check, if their rivals do it correctly. Comparing of shapes could not be easier, because children can use Jack´s board and directly place captured treasures there on respektive spaces. Experience then does not depend on the number of players.

Schatz Rabatz is rightfully a true gem for every small kid. This corresponds with a pirate theme and color of wood processing. In light of the facts, you would not mind, that the game is mostly dependent on luck. Confiscated parts of treasures do not go into a player´s pocket and he can thus easily lose the round even when he is otherwise the quickest. But filling coffers is true fun for kids. Schatz Rabatz is a game, that will be really appreciated by most children.

Schatz Rabatz entertains mostly kids. They are the main target group for this game, while adults will not be so well amused. Taking treasures from the middle and placing them into your coffers might not look like much fun, but every little pirate enjoys it. And despite the fact, that there is luck in the form of a rapacious pirate Jack, who wants his share of collected jewels. Thus winner will not necessarily be the best player. But the result is not important, if children are haveing fun and want to play it again. And here in Rabatz Schatz, pirate chests act as a magnet.

by Dušan on 17. 04. 2020
Have you ever played a game with animals and wondered, how it is possible, that all creatures have the same game to pass their time? Don’t they all [...]
Comments
Leave a reply