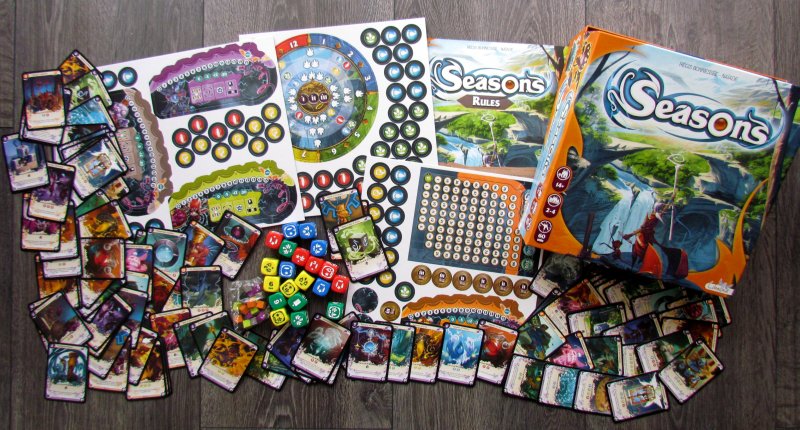 Every season has its own special magic. In the spring, all the magic blooms with flowers and things that grow. And then summer comes and suddenly everyone wants to use the magic of fire or light. Autumn, sees uprising of all the things, that fall. Well and youprobably already guessed winter. Frosty magic is one of the most feared, because there is no escape from the cold. Endure twelve seasons combined, survive and do not let others destroy you by their magic. It takes all your skill!

We should expect every conceivable kind of weather in board game Seasons, which was prepared for us by Régis Bonnessée and Naiad under the auspices of Libellud company and therefore in distribution circle of Asmodée. Unique illustrations were prepared by a duo: Xavier Gueniffey Durin and Stéphane Gantiez. Game was released back in 2012 and is therefore nothing new, but rather a fixed star. Let’s see together, how long it will shine.

Seasons is a game, that can catch your eyesight by its wild color box design. And after you open it, also by some unique illustrations, that are hidden inside. On the cover, we see probably summer and one magician with a large curved stick, invoking forces of heat. We will instead turn to power of our own staff and rather slip the lid aside. 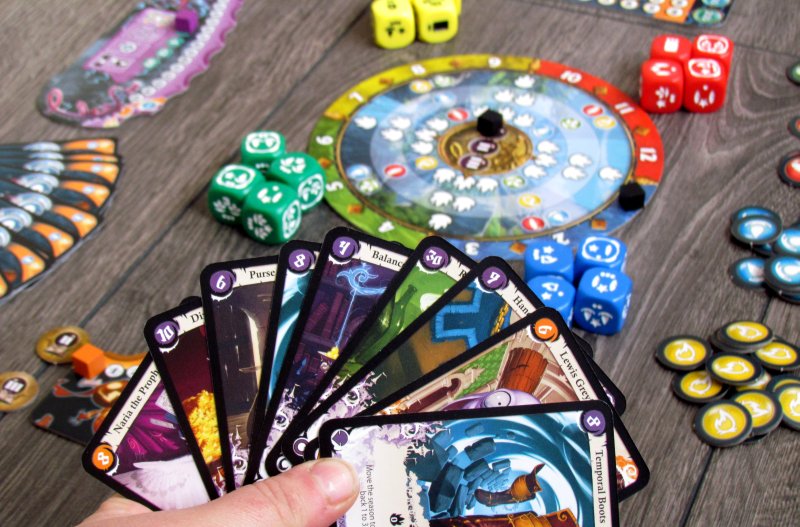 Although box itself is square, everything inside is round or at least with rounded edges. There is main round game board divided into three zones – middle is year counter, around it flows chart for energy conversion and completely on edge is indicator for months and therefore title seasons. Another big board serves as crystals counter (hence the victory points), whose values ​​range from zero to a hundred and then two big circles for possible first and second crossing of this border.

For each participant is ready one individual board, which is fairly straight on its bottom edge , but top side has a strange twists and provide space for cardboard energy tokens (elements of water, air, fire and earth). Board also includes a counter indicator limiting the number of cards in the game and bonus scale for any benefits. There is, of course, also quite thick deck of cards, which usually have besides illustration also text description of its capabilities and cost for casting. Upper left corner is value of cards in prestige points. Yet, there are cardboard tokens of libraries, wooden cubes serving as markers and colorful dice with different season symbols.

At the beginning of the game, center of the table is devoted to both boards nicely sitting side by side. On the main plan, players marks first year and first month and deploy starting number of dice around the board, next to each season (ranging from three to five dice for two to four players; always one more). Individual players can then select a color and therefore also their own player board. They immediately get their cube color and deploy it to four scales (two common on the middle boards and two private) and also two library tokens. Each also receives nine cards from a shuffled deck. 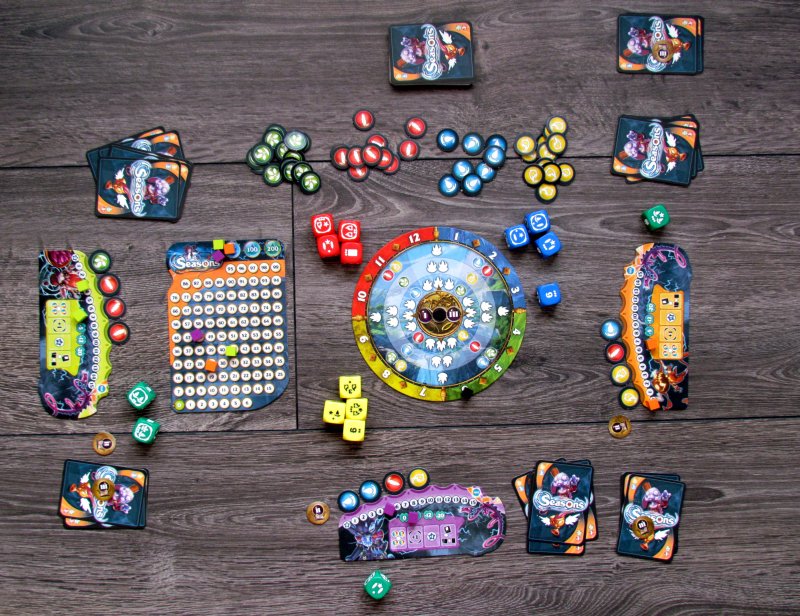 But these are still common belongings and their own. So it will not be easy to set it up. Instead, they have to choose one card and send the rest to their neighbor. Players are exchanging dwindling packages until all nine cards are divided between opponents. These nine cards are then split to three three packs by three cards, one set player takes into his hand and other two are covered by library tokens with the Roman numeral II and III, marking year, when they will come up.

Each round then begins by rolling dice of that season color. Current part of the year is shown by the cube on the perimeter of the board, which will move step by step throughout the year, starting in January, a period ruled by cold and blue color. Each side of the dice contains several different symbols, that correspond to some of the resources, but also numbers. Starting with the player, who rolled the dice, each selects one of them and puts it in front of himself.

Activity will return to starting player, who will now be able to harness power of selected dice or pass on its usage favor of other two options. However, key part are actions and four of the eight symbols in the offer representing actual elements. Each icon – fire, water, leaf or plant – provides player with matching energy tokens and allowing them to attach this resource to notches on his board. But there is also a maximum number for resources, which is same for everyone and is set to number seven. 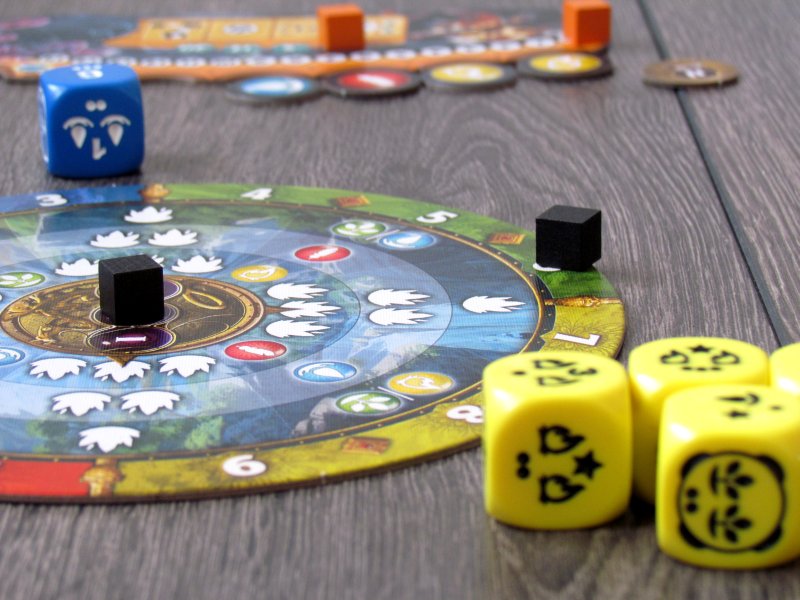 Star allows player to move cube on his development scale, while the picture of cards allows him to get a new card. Numerical value simply adds crystals to its owner, which are at the end of the game equal to victory points. Last option is transmutation of energy into crystals, which needs not be carried out immediately, but whenever wizard chooses during his turn and he must follow active part of the conversion table for the given season. Power of each energy varies through different seasons and can bring from one to three points for one token.

But what would all that energy be for, if players have not a chance to spend it? Instead of using dice, player can decide to summon some of the cards in his hand. He must have required types of energy to do so and possibly even some of those crystals. This means, that after paying required amount, player can place card in front of him on the table and start using its effect, whether it is a permanently activated (always usable for a fee) or disposable. Limit of cards in play is determined by value on player board scale.

When all the participants played their turns, season cube is moved ahead by as many dots as there are on last dice – the one, that was not chosen by any player. Consequently, it may lead to change of seasons and thus activation of some cards effects. Starting player role passes to next player and game continues until the moment, when the entire third year of the game is completed. At that point, players add up their crystal value with rewards for power cards, but also lose some of those points cards, if some cards stayed in their hand. Player with most prestige points is truly a seasoned winner. 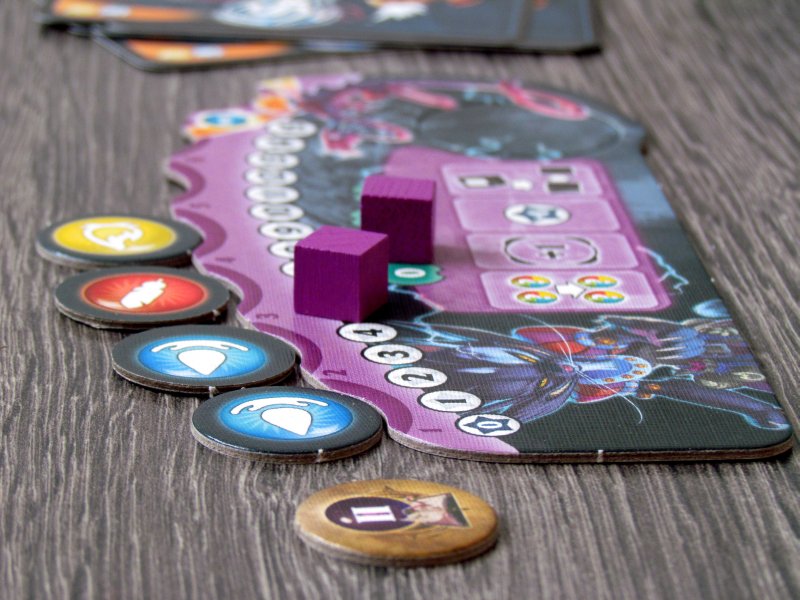 Seasons are actually in result a simple game, in which everything depends on one dice selection. Often, you will be left with only two dice to choose from, and they will force you to decide, what to do in your whole turn. But you also may pass on using dice and focus on other actions. It is clear, that both activities must be periodically rotated, because you need both raw materials and cards. Card effects can bring a pile of points or for example new energy. Anyway, their usage should not be underestimated, as well as the possibility to create combos. They are from time to time really powerful, if you know, how to combine them.

Cards also produce interesting situations, where players can attack on each other. Conflict is one element, that we would definitely miss in game like this. Fortunately it is there and we can not complain. Plus points for the authors.

Game is tremendously variable. This is thanks to power cards as there is really quite a lot of them. Also, by cleverly combining dice rolls and cards means, that players will have in front of them every time a little different situation. Layout of symbols and situation on the board also varies with seasons and players must adapt. Success, however, requires to have good long-term strategy. 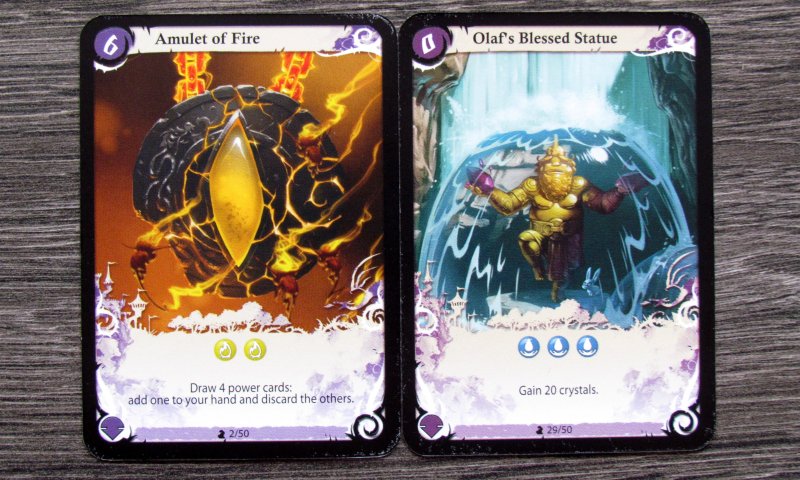 Card draft in the beginning works reliably and guarantees, that good cards will be distributed fairly among all participants. It is certainly a better option, than simply handing out cards as they go from shuffled deck and rely on probability. Chances are similar for all this time. Game is pleasantly different from other, but retains simplicity and can be enjoyed even by less experienced players. In doing so, it remains faithful and rewards those, who are willing to think over the situation carefully.

Seasons is simple to setup, but unfortunately this time saved will not salvage the fact, that game itself is easy to stretch over reported hour. Its length depends significantly on how much players analyze their situation and seek optimal solutions to absolute detail. With these players, you do not squeeze in an hour, but if you choose good opponents, game will move much faster.

Game is excellent in two, which in itself is a big surprise. But even multiplayer matches works very well, but its here, where gaps between turns start to show. With a growing number, you should simply expect it to last longer. 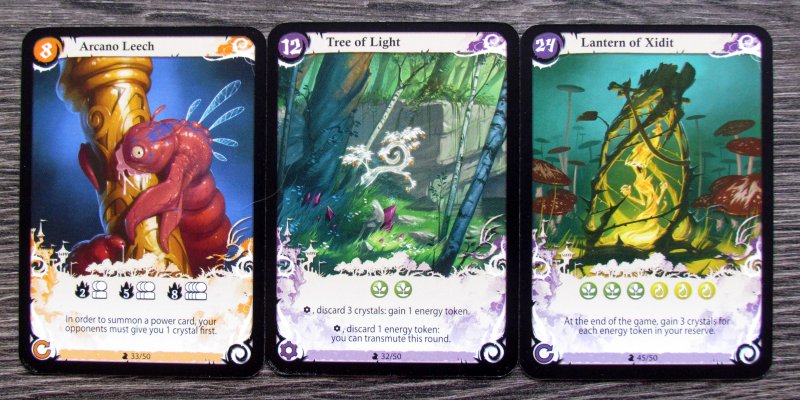 Processing is absolutely delicious. Art on cards is amazing and everything’s on the table has stunning impression. Rounded edges of boards and various unexpected shapes guarantee, that this game becomes topic of conversation with passersby easily. You theoretically should have no problem finding players for game of Seasons. Perhaps the only complaint is moving your crystals too often, being a little fiddly.

Seasons is a game, that deserves a place in the top positions of all, who are serious about boardgaming. It’s simple, reasonably fast, and above all tremendously variable. There are countless combinations, but the game is in fact tactical enough and does not rely on chance. Beginning of each turn is one of focus points to determine, what will happen. But the players themselves already have situation in their hands and can gain points, if they plan well. Seasons is incredible fun, which is suitable for players of all levels.

- thinking can stretch the game

Seasons are rounded experience for all. Just as they have no edge components inside the box, all the pointed ends have ground in the actual gameplay. And it uses them well to poke you in your thinking spots. It goes very nicely, it is funny and tremendously variable. In higher numbers, you may encounter a longer game time, when players will over-think through their turns. But this is the only thing, we can really complain about the game. Its working well even in two, it looks beautiful and has a pile of options in conjunction of dice and cards. Seasons is a crossover in a board game world.