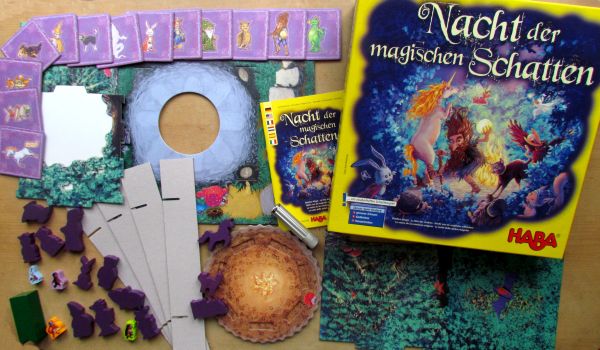 A mysterious meeting took place in the glade. Almost all members of the community came and responded to a call. There was a fox, a hedgehog and a squirrel. But all animals were waiting for their king – Erik, the Unicorn. Talk everywhere stopped, when he entered the clearing. Place became so quiet, that the soft bunny paws of last straggler were like a bear stomping. All council members balked for a moment, that they were betrayed, but fortunately it was really just rabbit called Chunk coming out of the bushes.

At this point, however, all animals already have taken a defensive position to protect themselves against a threat. A shining unicorn stood in the middle and around him were characters, that created an interconnected play of shadows on the trees. It looked like there was a hunter with rifle walking along the edge. But in fact, it was only a badger and that rifle was actually a squirrel’s tail. This would surely suffice to frighten even a bear. Fortunately, residents were in no danger at all and may peacefully continue with the assembly..

This is also that moment, when we leave together and look at a children board game. It also plays with shadows, just like animals were doing a minute ago. It’s called Nacht der magischen Schatten (Shadow Magic), its author is Kai Haferkamp and illustrations were prepared by Marc Robitzky. Name reveals easily, that box originates in Germany, where it was published by HABA in 2013. 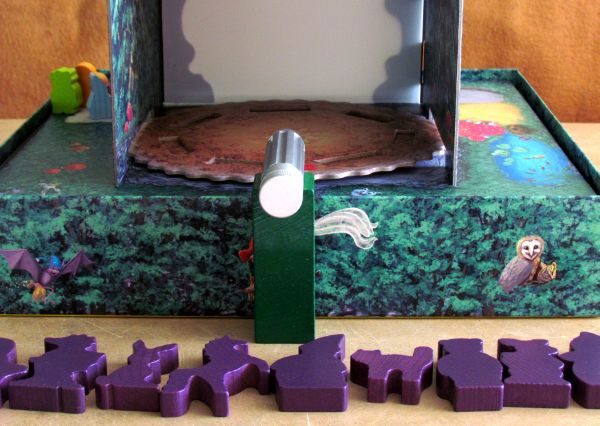 Yellow box will amaze you not only with its illustrations of dancing figures, but mainly with its giant size. The box is square with each side about 35 centimeters long and its also not exactly low. Everything has its reason as you will soon find out, when lifting the lid and breathlessly start investigating the shadows inside.

Wait, you lied! They are not there! They were chased away with all the light, you let inside. There is one big game board with several thin circular holes and one hole in the middle waiting for you. Around that round opening, you can see a gray area – it is a place, where animals carry out their secret shadow dance and you will be soon able to join them.

But first you reveal a sheet with thirteen tiles and certainly you will soon notice, that each of them belongs to one purple wooden figurine lying on the bottom of the box. Its silhouette corresponds exactly to that tile, where is colorful picture with a thin yellow line drawn around, that should suggest its shadow shape. 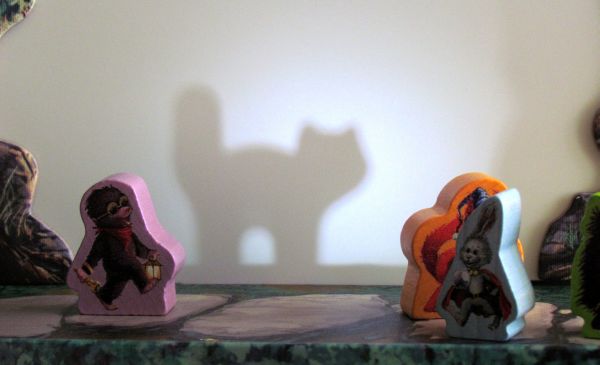 But that’s not all. There are also three cardboard illustrated screens, another one board with a white semi transparent surface and one sprocket with seven holes around a fire. Wooden figures contain also four more reinforcements figures with stickers on their side. These animals will watch the dance from the road. There is also one wooden stand and a small silver flashlight with five LED lights. This source will be responsible for the whole spectacle, but you first have to feed it with one AA battery (not included).

At the beginning of the game, you have to dump everything out of the box and put four gray cardboard stands in there instead, before placing a real game board on top of them. This levels the playing board with edge of the box. Its thin slots are waiting for screens to slide in there, so board with white surface is facing towards the stone pavement around and two of them are at its sides. All three walls are connected and covered with one roof tile. But first, you have to put a cog-wheel inside, into that round opening in the middle.

Each player chooses one color figure of passing animals, representing them and recording their points. You can be clever like a hedgehog, cunning like fox, quick as a rabbit or smart as a mole. All of them must be put on the starting line at the beginning of the rocky path. Then it’s time to choose eight (nine or ten – depending on the number of players) of thirteen available animals attending the dance and also their cards. These are put on the table, so everyone can see them well. The starting player takes flashlight, wooden green stand and first shadow show can begin. 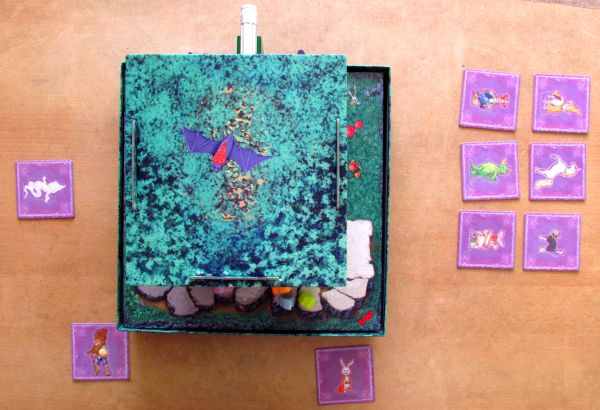 All but the projectionist must now close their eyes or turn around. The player then secretly selects seven pieces, which he puts in any order on the rotating gearwheel. Figures are firmy holding inside, as each place has a shallow hole in it. After all figures are in, you must rotate the stand in a way, that the picture with mushroom is facing out. Once everything is ready, he must hide the remaining pieces behind a box. These are not among the seven chosen and they do not get to dance this round. Now everybody can open their eyes and show can start.

Now finally the guessing part is here. Players must all watch the white screen and wait. Once active player puts the flashlight on the stand, he turns it on and figures start to cast shadow on canvas. It really seems just as if animals and other creatures began to dance, because projectionist starts turning gear gently. He does that until a mushroom appears again. This means, that all figures have rotated one round exactly and every shadow was visible once on the canvas.

The challenge for other players is to guess, which animals of those on tiles openly visible are missing. Everyone gradually (but as quickly as possible) takes one character tile, that is involved in dancing. This is also the main reason, why there is different number of pieces according to number of players in the game. Whoever was right and picked up the correct tile can move his piece on the sidewalk one space forward. Shadow theatre then continues under supervision of another player for so long, until any of the characters arrives to finish line. 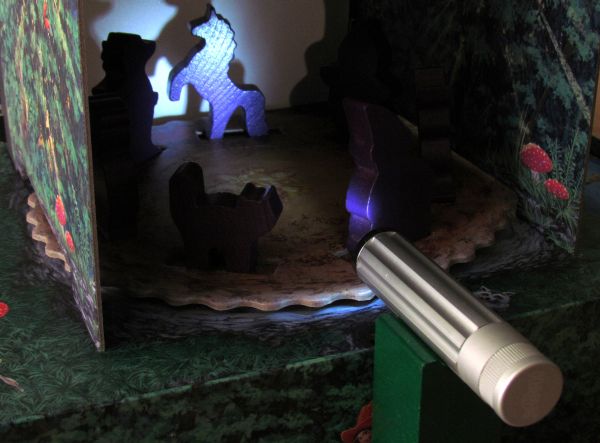 Nacht der magischen Schatten is a game, that takes you by heart mainly for its simplicity. You do not need to learn any rules, you just need to build pieces to form a theater play. You will actually do only this at the beginning with the youngest children. Just play with shadows and look, how adorable they look. It is better, if they become familiar with all figures in this playful way and remember them better. They can tell you a story, or vice versa you will use shadows on a white canvas for featuring a story for them. Only in this simple entertainment is hidden enormous potential and we still did not get to play the game.

If you play with more children or small players, they should first get to know the characters enough. Then, you can start to train your memory. This is the most major skill you need in this game. But certainly, competitors must also involve concentration and their judgement. The shadow of some characters do not correspond to what they actually really are, so you have to be careful, when watching dance.

Each game contains different setup of pieces, because there will be always only part of the thirteen creatures in play. Therefore, the game is always a little different, as some characters are more similar than different. In addition to the animals, you will find also a spirit, magical dwarf, dragon and or fairies unfurling parchment. 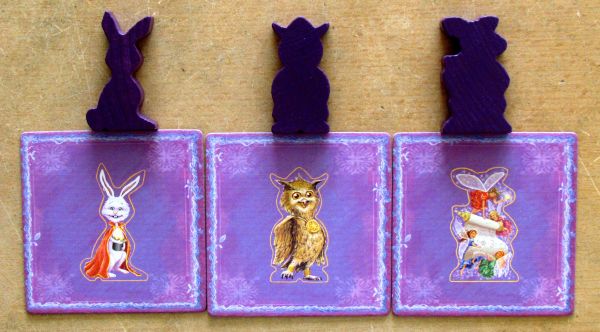 And if you find this basic version too simple, you can hide tiles with pictures during the screening and show them again after the light is switched off. This way, it is much harder to guess, because you need to remember every silhouette ahead. The game is fair in all the number of players, although you pick up the pieces with silhouettes gradually. Always there remains at least one correct answer for each player, because there is more correct answers in more players.

The game is over quickly, because each round usually means moving forward at least one spot. Yet it is not easy to achieve goals first, because the shadows are treacherous. But as you approach the, the more likely is, that children will want a rematch right away.

Higher price for this game is outweigh processing and originality. There is not some high number of components inside a huge box, but they are all an integral part of the beautiful and atmospheric entertainment. And the money you invested in this case definitely return in the form of shadowy experiences.

Nacht der magischen Schatten is a beautiful child’s game. And I have something to confess to you now. If I had this game as a kid at home, I will never leave it and play with it over and over again. It represents everything, that so many children appreciate – stories, fantasy and magic. This box is just a dream come true, from which the authors have made a game. What do you think, can it be even better?

+ perfect processing
+ game based on distinguishing shadows
+ you need not only good guess, but also memory
+ excellently balanced for different player numbers
+ lots of shapes
+ you can easily expand game with your own objects
+ all players are contantly involved

- some figures have shapes, which do not match their identity

Shadow Magic has prepared a beautiful shadow theatre for each player. Usually these things are designated only to look at, but here, you will have a unique opportunity to create. One of all players per turn will perform a dance with these creatures, while everybody else is trying to guess, what creatures are really dancing by the fire. But speed does not matter at this point. You only have to remember every figure, whose reflection from the fire appeared on the wall. Only at the end of the whole spectacle, you can select card of that animal, who did not dance this round. Game looks absolutely gorgeous and whole processing is excellent. It evokes feeling of a real theatre. It promises not only great experience and will thrill any child without problems. There is much more silhouettes in a box, than you need for one game, which makes the game quite variable, while number of used creature differs according to number of players involved in a game. Division of cards among players at end of each round is very clever and nobody is in any advantage thanks to his position in playing order. Some shadows/shapes do not match actual picture of the character it represents, but it has no real impact on gameplay, because there are also shapes aligned on each tile. Shadow Magic offers without any doubt a unique and beautifully playful experience, you won’t find anywhere else.