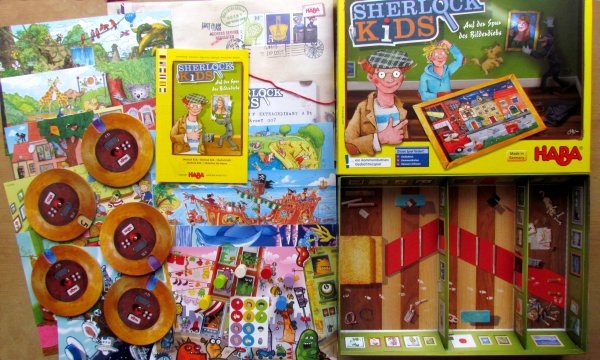 When I put a white scarf this morning in the window, I did have high hopes. But now its afternoon, and he never came. I’m starting to worry, that he won’t come and my mystery remains unsolved. I lost my favorite toy car and I’m sure I locked my room. When I left, I certainly placed it on the shelf and now its not there. I searched everywhere, but in vain. This is certainly case for Sherlock Kids..

Maybe it does not seem so, but this detective has named a little successor, which is simultaneously also name of a children’s board game. Sherlock Kids is published under brand of HABA publishing house, as the game, which supports communication in kids. Its author is a little surprisingly Reiner Knizia, who created it in 2013. Illustrations were provided by various authors, as you’ll understand in a while, when we start poking through contents of the box.

We find a smiling Sherlock on the cover and one of the mysteries, that happened to him. But we also have a clue, who is stealing a valuable painting right now. But this is a time to hurry up and look under the lid. There could be an instrument out there somewhere, which allows us to put thief in jail. But first, there is a big surprise in the form of a huge A3 envelope waiting for us in the first place. It is made of hard paper, printed with various inscriptions and a string, which serves as a seal. 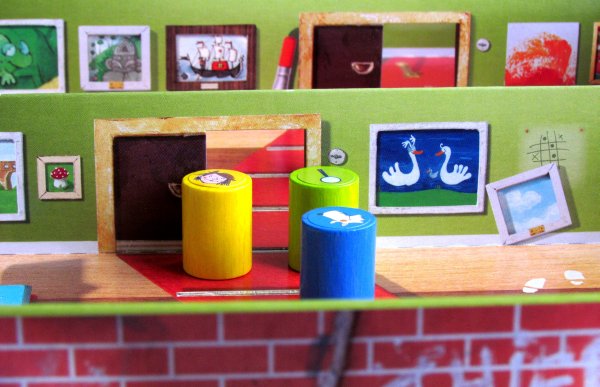 Inside this envelope, there is a total of ten sheets of stiff paper, having one image on each side, with lots of objects, colors, and always presented in a different graphic style. These illustrations will serve as the basic clues for the fun, we should have. But lets go to an art gallery first, because it is located on the bottom of the box.

This lower part of game box serves at the same time also as scoring scale. Two foldable paper walls (slid into prepared slots on the sides) divide it into three rooms, which leads from the entrance to victory on the red carpet. Who gets first there reveals a crime and becomes winner of the game. But we are getting a lot ahead of ourselves with this. So far, we still have other components missing – there are colored circlets serving as voting indicators for each player.

Carton circles are held together by a stud and enclose a third wheel with slices of colour, which together form a voting wheel. At the top, there is a small cutting and as it spins, you encounter different colors showing through (white, red, purple, blue, green and yellow), but also numbers from one to six and a letter X. The players also get rulebook in a number of different languages. 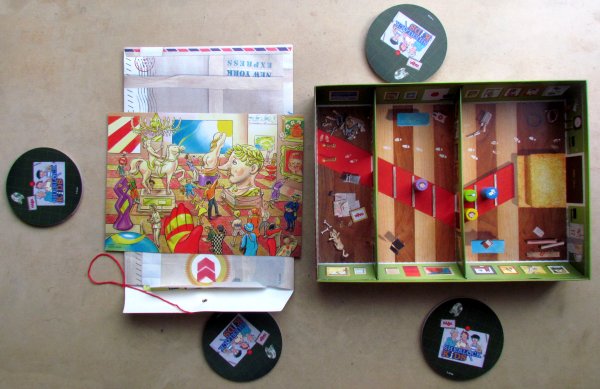 At the start of the game, player place museum between them. Every player now places piece in his chosen color on starting space in gallery. Then everyone gets one voting wheel and all the images are shuffled and placed inside an envelope.

Players then gradually alternate in the role of riddler, who brings Sherlock his new puzzle. This player takes the envelope and pulls out a random picture, that is placed on table clearly visible to all players. At that moment he also starts measuring time (estimated), which all viewers have to see and remember, what is in the illustration.

Now the riddle comes. Somebody has stolen something there and you have to find it in your memory. In this game, players are all detectives and when the image disappears, riddler asks players a question. He could invent in during time, when others tried to picture remember the picture. The question always has to be an answer about color. 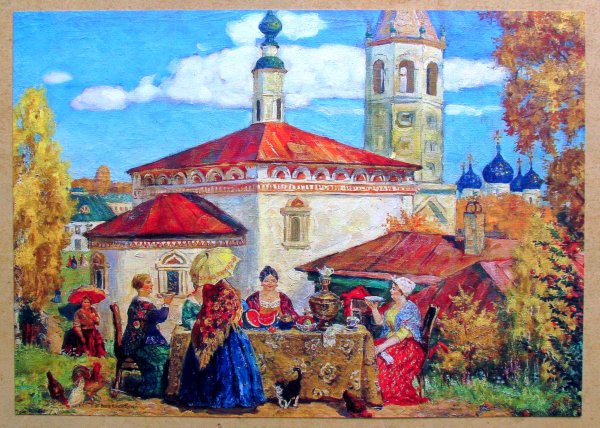 Each player tries to guess the color by selecting it on his guessing wheel. In the rare event, that the answer is a color, that is not on the wheel, player should choose letter X instead. Everyone gradually selects his choice and places voting instrument with color facing downwards. Only when all players have answered, their choice is revealed and all the correct answers allow their owners to do one step forwards with their pawn in museum. Likewise, riddler receives a point in the event, that at least one (and not all) of the players found the correct answer and therefore, is was neither easy nor difficult task.

Game ends after the pre-specified number of rounds or when one player reaches the scene. He is the winner and best children’s detective, that ever paced our world. He should use his title appropriately.

Sherlock Kids has a chance to be among the best and most interesting games for children (at least coming from this author). In our eyes, it succeeds in everything, what its trying to do. But above all, game skillfully combines entertainment with an instructional element of communication and attention to detail. Children just love finding objects and with simple rules, it is truly easy. In doing so, it makes sense to be in role of The Riddler. 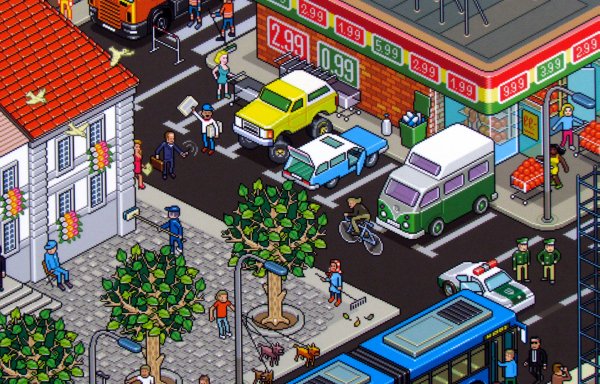 Play trains visual memory in great way. Initially, its really not easy to cover the entire area of the image, but if the players focus and play the game more, then they gradually start to improve. However, it is still a high chance of error, because there is so many subjects in the picture and their choice depends only on the decision of Riddler.

Game length is adjustable, but when using the recommended two to three rounds (depending on the number of opponents), you will end in half an hour without a doubt. However, everybody is involved in game in every moment and all this time passes quickly. In a minimum of three players, Riddler role is harder, because you have to balance it really carefully and its better to be player, who answers. In contrast with more opponents, there is a better chance to earn points by asking questions.

Rules offers also a variant with numbers. That is why there are numbers on answering wheels. It is therefore possible to ask questions also about the amount, not only color. In addition, the authors encourage use of additional resources, if you have the original twenty images contained in the game is not enough. Or even ask for anything and use paper to answer.

Sherlock Kids is an amazing memory game for children and their families. It does not offer any challenging fun, but it looks good and all have fun with it without any distinction. Condition is only in willingness to memorize and a good mood. Remembering pictures looks simple, but it is really a task for the best detective of all time in the end. Or at least child version of him. Sherlock Kids is the right detective story for children of all ages.