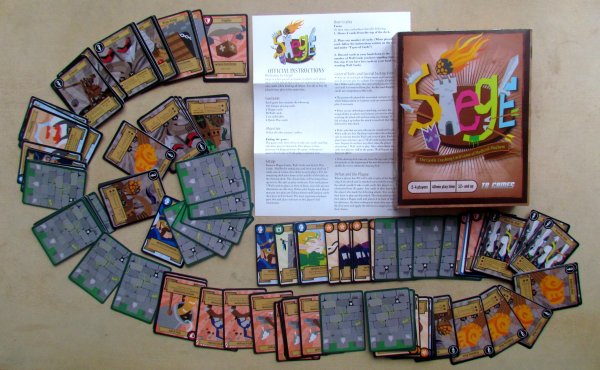 Our castle is under siege. It’s been three nights, a knight came to us, holding a white flag and brought us terms of surrender. There are huge machines waiting behind the moat – rams, catapults, siege towers and other monsters, I have never seen before. Raiders have Leonardo da Vinci in their midst, scientist and engineer of these machines. Fear is beginning to spread among the people and its already creeping up to my heart as well. We must decide today, if we let them shed our blood or rather give up and accept new master..

Similarly, people will feel in your castle, you will be defending in game called Siege. It did not find traditional way to market yet, but instead can be ordered from the server Gamecrafter. Its author is Kenneth Bogedahl and cheerfully simple illustrations were created by Sage Turk. The game originated in 2011.

Brown paper box inclueds printed name of the game under attack of war machines. Offensive weapons are rushing at it and you can imagine, how will you be using them too during the match. To interior of the box, you can only get through door at the top of the box, which can be thought of as a trigger gate. Inside, there is a drawer, that goes all the way out. Instead of cardboard, foam is used and glued together to create two compartments for cards. 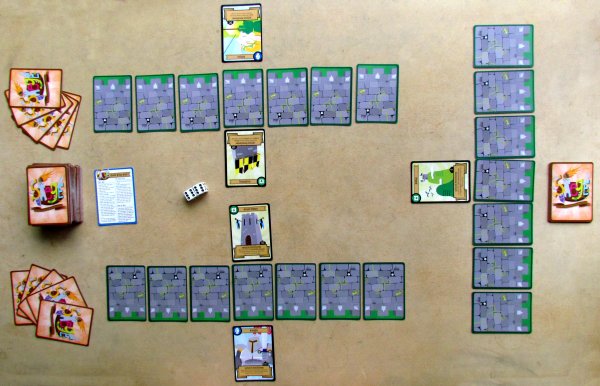 In addition to the cards, there are just two dice and rules printed on one sheet of A4. But back to the cards, that shape the heart of this game. There is a total of 169 of them, four blue-bordered cards serve as a help for the players and quick rule remainder. Smallest number of game cards found in a box shows plague (there are only two of them). There are also some wall cards, which look exactly the same with image of a stone wall covered with vermin and plants.

Largest deck of 135 pieces constitute actual playing cards. Type of the cards can be recognized by its upper left corner, where you can find different symbols ranging from a shield (defense) to a sword symbolizing the attack. In addition to the illustrations, there is only the frame at the bottom on the cards, which describes capabilities of the card. Exception is hidden only in offensive cards, where frame describes their attack power. All of them are used for tearing down walls, protection or promoting your war campaign.

At the beginning of the game, you take all game cards (excluding plague and walls) and shuffle them together. Each of the opponent puts a help card in front of him and gets seven cards from the deck into his hand. Everyone builds his fortification of seven walls cards, that make up the castle and also protect him against other players. Wall will also divide the playing area of each of the participants into two parts – a garrison (inside of the castle) and card enhancements (played outside of the castle). Before the game truly starts, you have one opportunity to reveal all improvements and units from your hand. Only then game really begins. 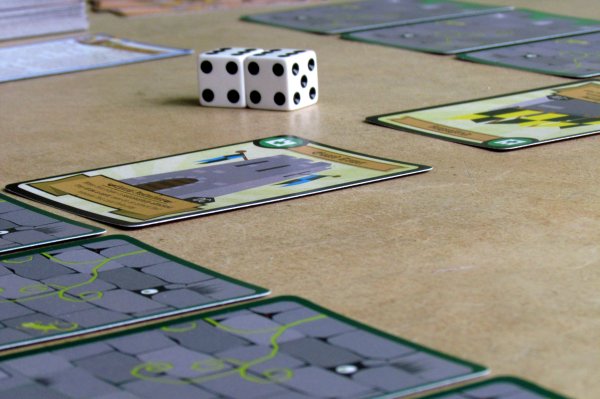 Player whose turn it is, should first draw two new cards from the deck. Then he can play any number of cards and take advantage of their effect. Thus he can play enhancements, that will help his castle to defend against raids. Castle crew can help with various tasks, but even lone wolves can run around the castle. They are, however, a one-time special cards with an asterisk.

You will need to decide a fight quite often. This purpose serve a pair of dice. Cards have different effects according to value players are able to roll on the dice, which are shown in a box with several bookmarks. Which one is selected is decided by a roll total. When the attacker plays a card with a sword and marks the target of his raid, defender can play defensive cards and completely stop the attack. Defensive cards also allow you for example to repair walls, that were tore down by enemies.

Walls are all the game ultimately is about. Players have seven of them and these can be easily demolished. At this point, player turns the wall card to see a picture of destroyed wall (on rear side of each wall card). The amount of intact walls shows at the same time number of cards a player can hold in his hand. 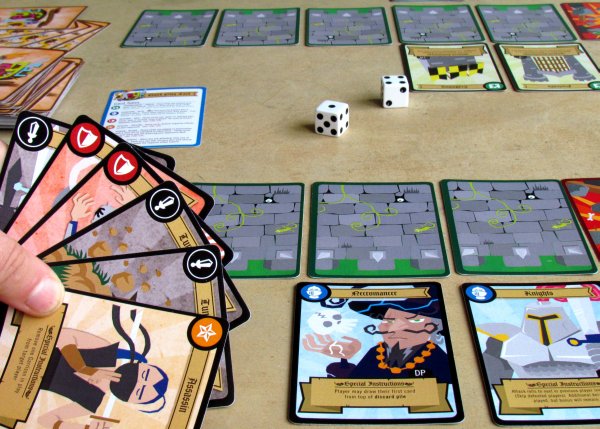 On the battlefield, there will be many victims and plague begins to spread. Each player, who no longer has any wall in front of him, takes a plague card. Once he gets to his turn, he rolls the dice and if successful, he can hurt other players. Once there are only two opponents left in combat, it is no longer possible to repair their walls. There’s no time for that. Game ends, when another castle is demolished and only one remained standing. This player is proclaimed the king.

Siege is a very elegant and simple card game. It may seem uninteresting at first glance, which is partly for its very unusual graphic design, but trust us, you are very much mistaken.

The game is packed with action, because passive victories are not possible. You have to use cards, while without pounding into opponents walls, you will never be able to raze enemy castle to the ground. Plenty of different types of cards and a variety of permanent and immediate effect ensures an interesting experience even after more matches.

This card game uses dice to attack and that means, their result can often surprise you. Players always have access to only two dice and is only up to them, which pile up bonuses will you be able to use from the resulting rolls. Coincidence plays also little role in drawing of cards, which can sometimes aim towards unfairness.

Totally unique idea is with the plague, that allows eliminated players to interfere further with the game. They are therefore not getting bored and can harm warlords, whose armies are still standing on the battlefield. Their action is also decided by dice, so even after elimination, they can further enjoy their turn. But above all, you can take revenge on players, who knocked you and this is another very important layer of the whole game.

Siege is fun with all numbers of opponents, while with two its quick and uncompromising, in four is the game more erratic. But it always oozes atmosphere of sieges in the first place, which is great. The mechanism of the walls and their breaking down is simple, especially in connection with the size of your hand. The game is played to the end in incredible fifteen minutes (!) and in it, a lot happens and makes it pleasantly addictive game.

Due to all the aforementioned facts, it is a pity, that the game is available only for printing through GameCrafter. This is for the Europian player not easily achievable, as the transport costs of the game is almost as its price, which itself is not quite low. This game would definitely deserve a regular printing run and distribution, so players of all ages can enjoy it.

Processing is simple and reflects the fact, that the game is more like an author’s dream come true. Nevertheless, a specific appearance does not interfere with the gameplay, because cards are well laid out, even when they include several abilities linked to different results of dice roll, you still have a good overview. 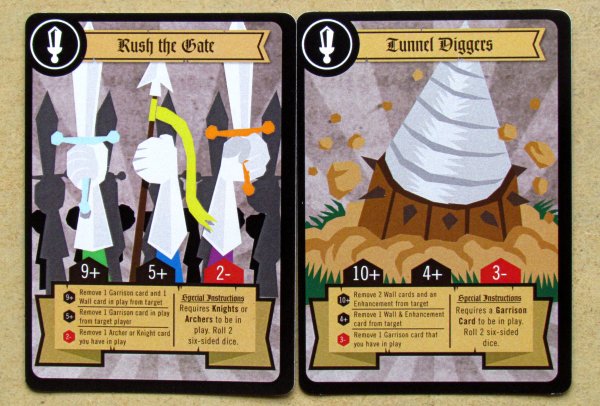 Siege is an excellent card game, that is much better, than a lot of games properly released. It belongs to one of our favorite card games in last year mainly due to its atmosphere and simplicity. So if you can, get Siege game, it offers a wonderful experience of your crashing opponent’s castle.

Siege will put you on the wall. You have to defend your castle against invaders. At the same time, you will also seek demolition of a nearby enemy castle. Fortress, that can outlast any other, is the winner. The way to do it all is to play cards from your hand. These can be not only to attack, but also for defense or support with different effects. Players draw them unfortunately randomly and this can often determine success or failure. During the raid on the enemy's wall, attacker rolls the dice, and this determines the strength, with which player can attack. Defenders need only to sacrifice defensive card and danger is reflected. The game has a nice atmosphere, that is encouraged even by the presence of plague. Even when participants are eliminated, they still have the possibility to interfere with the game and harm others. Although Siege with its graphic looks too biased at first glance, inside its a really fun game.