by Dušan on 11. 11. 2019
1
Tohle musíte mít
previous article
ROZHOVOR (Falco): Tvorba hry Entanglion
next article
Review: War with the Evil Power Master - about the fate of the universe and more
Contents 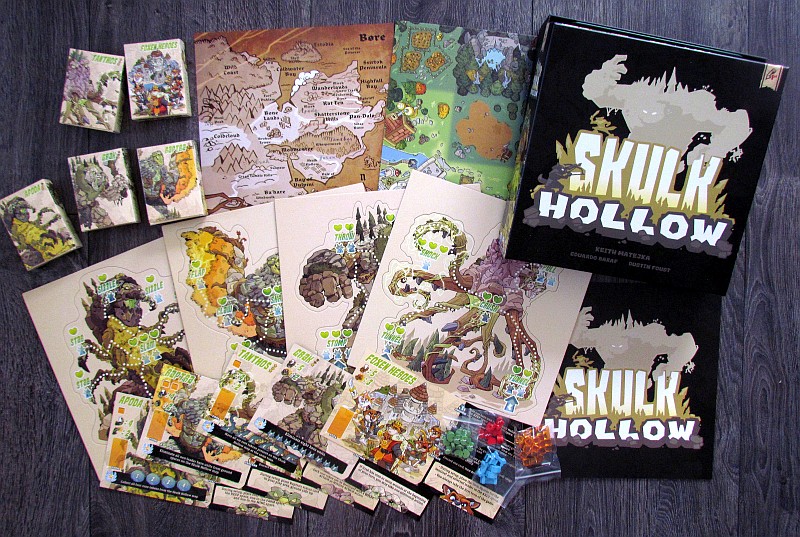 We were actually a bit unlucky. Living in a city, that is first in the path of awakened giants, can be nothing but a huge hurry. They appeared, sowing only horror along their way. No one knows, where they are going or what they want. Maybe their goal is to destroy the world they once helped create.

All players, who are interested in the board game Skulk Hollow, who is now on their way to all gaming enthusiasts, will join fight of David and Goliath. Its author is Keith Matejka and the illustrations were provided by Dustin Foust. The game was presented on the Kickstarter portal by his entire Pencil First Games team and proved to be very successful.

On the lid of a standard square box, a mysterious silhouette of one of the guards awaits the player, and a small fox defense unit stands in his way. Inside, there is map of Skulk Hollow divided into nine squares. Players put this map between them, but in order to know how to make it, the pair of opponents must first split into representatives of foxes and a devastating guard. The hero turns the corner of the plan with the castle towards himself, while the villain is looking at the corner with the cave. 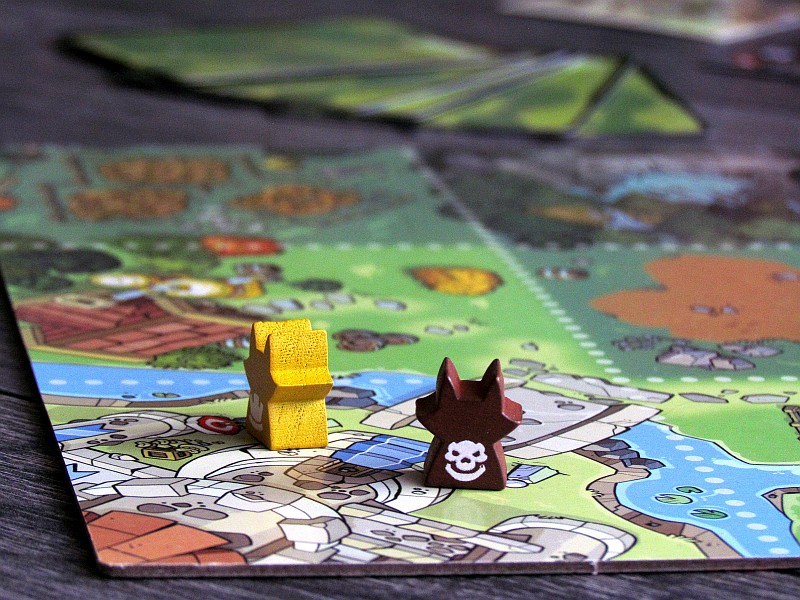 But the choice moments are not over yet. Evil player has four huge monsters to choose from and, depending on his choice, he gets a piece (puts it on a cave), a board, and puts a large cardboard silhouette next to the plan. On the body of this giant, there are routes, that foxes can climb and inflict on the devastating creature important hits.

On the other side, player in the role of defending animals always gets the same board, but completes it by choosing a leader. He also receives a sentinel card and places both of them together on their castle. Each opponent then gets his deck of cards, from which he draws the prescribed number. All other pieces and cubes of the components are set aside and the game can begin.

From that moment on, both sides will rotate fairly, with each turn always containing as many actions as is prescribed for that character and side. Each board has this number in the upper left corner. Above all, either side can play cards from hand and use their abilities. These largely allow the movement of figures, whether guardians or foxes, as well as specific effects or gain of power cubes. By sacrificing some of the actions, they prepare more interesting effects or bonus actions for the following moves using the dice. 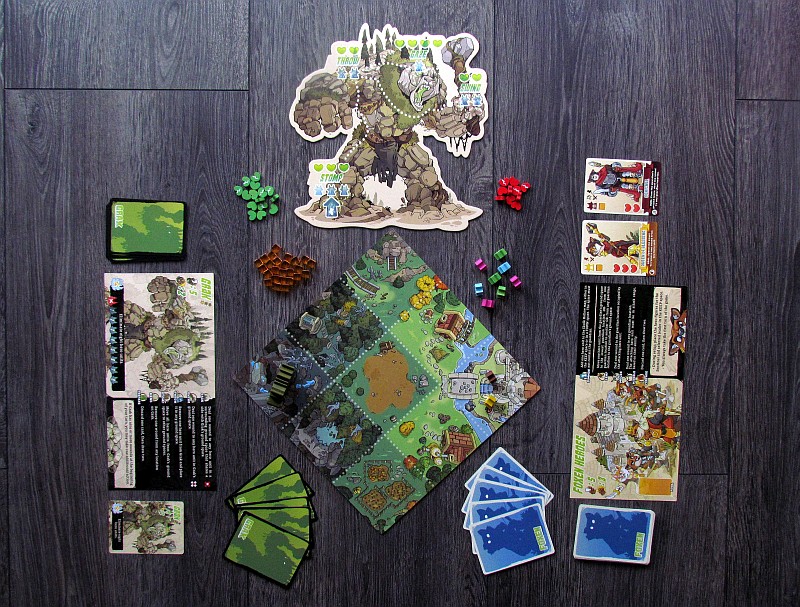 There is also attack on the cards in addition to movement, whether ranged or melee. Each has its own rules, but none of them uses dice and instead directly takes the hearts from the selected target, be it a fox or a body part of a guardian. But for foxes to send someone into battle, they must first summon reinforcements. To do this, player uses special reinforcement cards, that can be easily played and new figure added to the Skulk Hollow map.

In addition to the basic and main options, players can also use a preparation action, for which he discards one card and receives two new cards from the draw deck. And since the cards are generally crucial for the tactics and course of the game, then this action should not be underestimated. 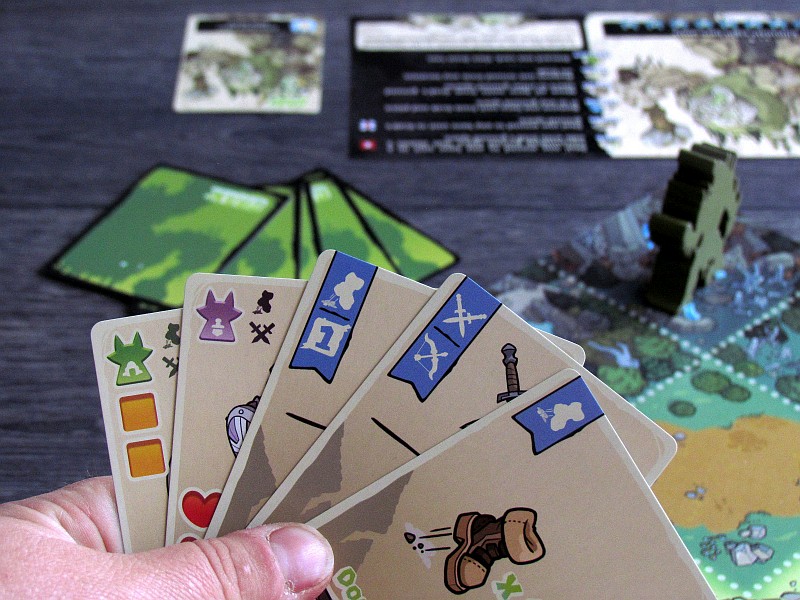 Part of the fight of both sides is primarily a physical battle, despite the fact, that there are really gigantic size differences between opponents. The foxes can, besides shooting from the bow, also jump on the giant (with the help of a special actions) and climb parts of his body. Each part has its own number of hearts and is linked to some monster ability. And if they are destroyed, it is possible to deprive the opponent of this action.

All participants have their own points of life. If a little hero loses them, he is simply eliminated. This is worse for the two main participants. In such a situation, the game immediately ends with loss of that side. The guardian player also has one specific winning condition on his side, that will end the battle regardless of the condition of the participants. 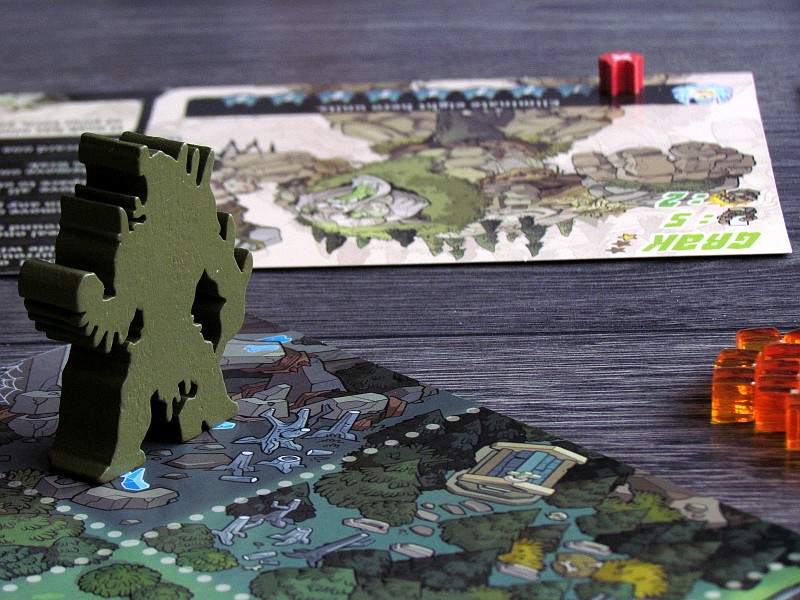 Skulk Hollow is an amazing game for two. The great expectations we had from the game at the time of the campaign were fulfilled to the last point. The feeling of dueling with huge monsters is truly unique. That’s what’s tempting on the side of foxes – to climb the enemy and gradually inflict damage to it. Big opponent has each his own weapons, shaping the form of completely different gameplay against each of four bosses.

The game experience is the main thing waiting for you. The duel is really exciting from start to finish and you never know, if there will be any last moment surprise. Both sides have interesting options, but always have a clear choice of cards in hand. Each card is divided into two halves and the player can choose the action, that suits him best. 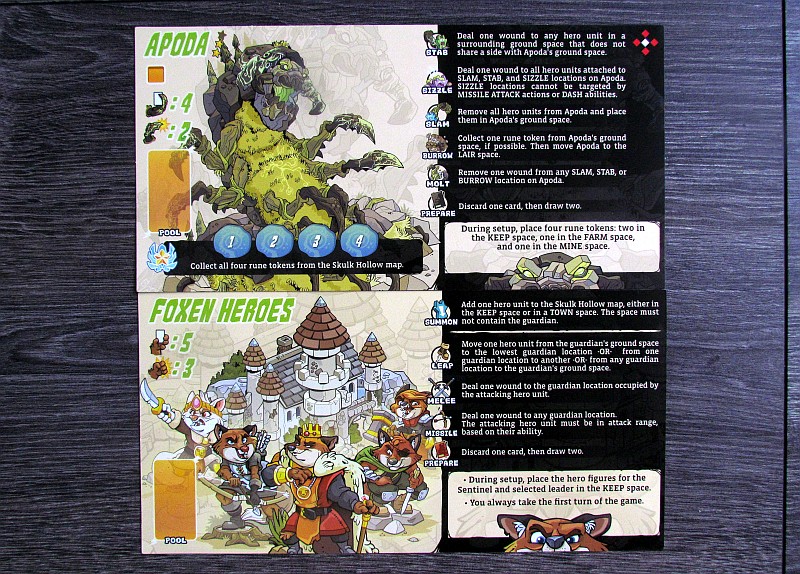 The moves are very fast, which is a huge plus. Players do not have to think or calculate in any way, there is no need to roll dice or evaluate anything further. Everything is clearly given, so the game goes very well forward. And up to a total of some fifty minutes, while the duel can be played faster.

It is clear that there will be a difference between player chances for winning, if one of them is a beginner. Fortunately, the game also offers minor handicap options. In addition, the individual guardians, that differ in difficulty and offer of abilities. This difficulty is expressed by the number of stars next to the giant’s name. 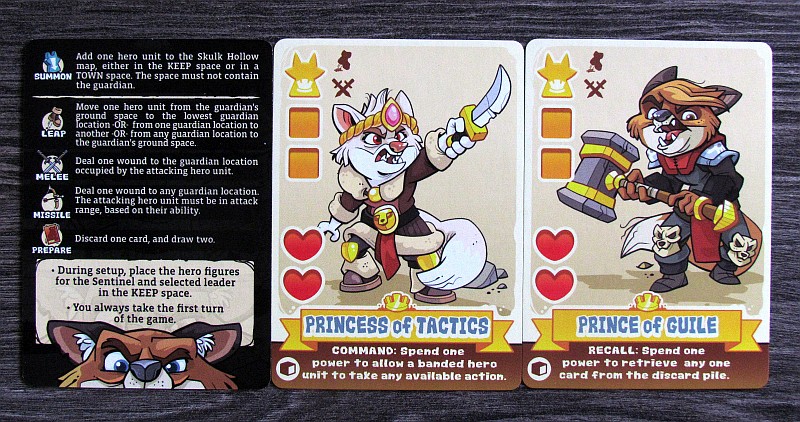 The huge variability on the side of monsters is exactly the attraction, that got most of us immediately interested. And it is justified, as is clear from the previous paragraphs. Every monster really works differently and brings something interesting to the game.

Unfortunately, this game did not avoid some minor shortcomings. The first small thing is a certain simplicity of the rules, in which its not easy to find something. A little more details would not hurt as well as some overview. Obviously, there is a limited amount of guardians in the box, and their gameplay will sooner or later get into your blood and start repeating itself. But until then, you have a lot of fun untilboth opponents had a chance to discover all the secrets of their characters and move on to the next and the next and the next and the next.

A bigger setback comes with the side of foxes, which does not have such an interesting and variable gameplay. It changes only with the leader character and the order of the cards drawn from the deck. So if you play in the same two players (like we do), you have a given division of sides, then the players in the role of foxes very quickly start to repeat games. At least in terms of card variation. Fortunately, all of this is saved by the enemy, who requires different tactics every time.

Finally, it should be noted, that the game also includes beautiful detailed illustrations and really huge wooden guardian figures. They look great on the plan, as is evident from the surrounding photographs. But the game remains beautifully simple and straightforward. Its accessible to less demanding audiences, it deserves to be one of the perennials, if you want a conflicting game for two. 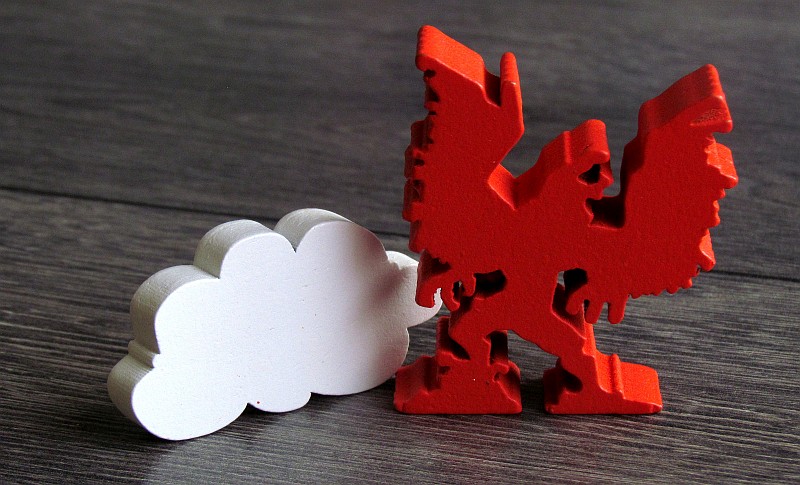 There is not enough of asymmetric games for two, and if you want something easier and more accessible than a great Root, then Skulk Hollow is a safe bet. It is hard to resist the offer to fight the giant guardians (or to stomp rivals in their role), you add fun gameplay and you can get nothing but a blast.

Skulk Hollow kept up with promises, and the only drawback is the high probability of smaller replay value, that after a few dozen (!) games in the same composition of players.

- starts to repeat itself over time
- lower variability of fox options

Skulk Hollow didn't need much – just take huge characters and give their tiny opponents the chance to climb their bodies. Seemingly unequal struggle is a theme, that has always fascinated humans in their heart and we tend to cheer always for the outsider. Yet you will hardly resist the chance to take on the role of one of the giant guardians and enjoy all its possibilities, swiping small foxes out of your way. The game is fast and exciting for both opponents. Skulk Hollow won our love without a doubt.

by Dušan on 06. 04. 2020
The huge pot in the courtyard is a legend in our school. Its origins are enshrouded in mystery, but we were told during our freshmen year, that its a [...]
comments
Leave a reply