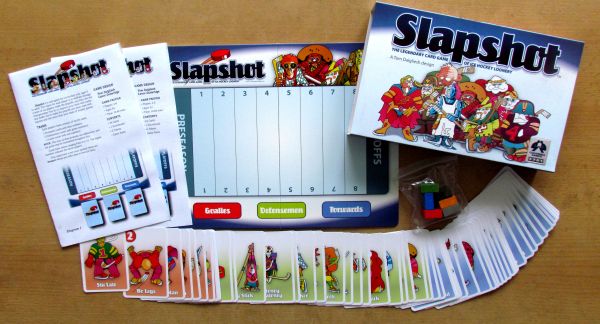 Today’s hockey league match brings one of the most exciting fights of the season. Armoured Gorillas are brought to ice by their captain Ice Capone. In his footsteps are bulletproof goalie Moby Stick, his brother Hy Stick, cold The Iceman and sharpshooter Ivan Fazov.

Other members of the team will probably refrain in cabins for some more time, but it does not matter to the pirate audience, because they can finally welcome their home team on ice. Big applause for the team of Cannonballs! They are led by a pirate captain Robin Hooker, but there is also the legendary Billy the Skid and Trapper John. Each of those men gets big applause and when it finally calms down, both teams are already ranked on the initial face-off. Match may finally start..

We have had tennis and football in our reviews, we are preparing review on baseball or golf, and there is also a game about basketball. But one important sport is constantly forgotten by board gaming industry – hockey! Why? We have no clue. But there is no other game, that we are aware of. So we have finally discovered and received a reviewer copy from far United States of America and here it it. 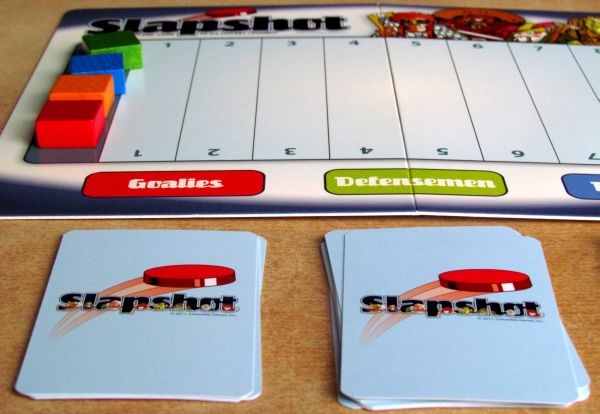 Prepare a standing ovation for a game of Slapshot! But wait, we really do not know, if it is any good by now. What we do know is, that Slapshot is published by Columbia Games. Its authors are Lance Gutteridge and Tom Dalgliesh, whose Wizard Kings (review) cube war-fantasy have we already played in the past.

Slapshot comes in a much smaller box, but works on the same drawer system. After removing the cardboard packaging wrapping around the game, you get a box with a hinged lid. Inside you will find a hard cardboard plate for keeping score of your teams, six wooden tokens one for each player (yes, they are the same as in Wizard Kings), english rules and above all – 54 hockey players cards.

These cards are divided into three kinds simply by colors – red goalkeepers (after the color of the goal line), green are defenders (green is safe, right?), while attackers are blue, probably because they cross blue line the most. However, color is not important for a card. The only crutial info on it is a number listed in its upper left corner. This may vary on a scale of zero to ten (there is even one 1/2), where higher number means a better player in scoring goals. Four cards are also wearing red cross symbol – these are bullies, so stay away, when they pass! 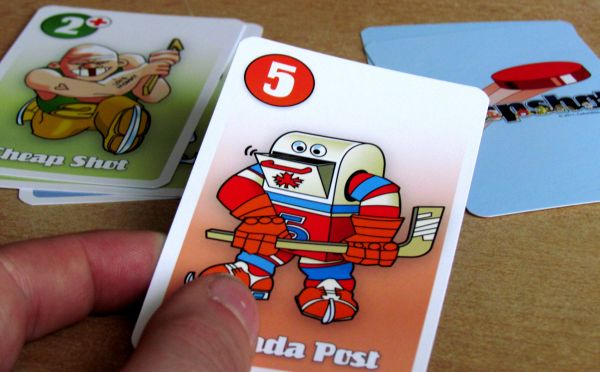 Each player becomes a manager and coach of the hockey team in one person. His team will always be made up of one goalkeeper, two defensemen and three forwards, exactly as it stands in real hockey plays. This corresponds with card offer, because there is only nine goalies, eighteen defenders and nice twenty-five attackers.

The game itself is very simple and its principle is based on a classic card game, that every family knows and has played at some point – War. Players reveal a card from their deck in it and the higher number always takes the whole pair for the winner. But do not worry, Slapshot is more than just that.

At the beginning of the game, you split cards according to their classing into three piles and lay it under the game board, where is a position prepared for each hockey post. Each player will randomly draw (= draw from top of shuffled deck) his team – one goalkeeper, two defenders and three attackers. Each must also choose his team color, take corresponding token and place it on the counter on the Preseason field. 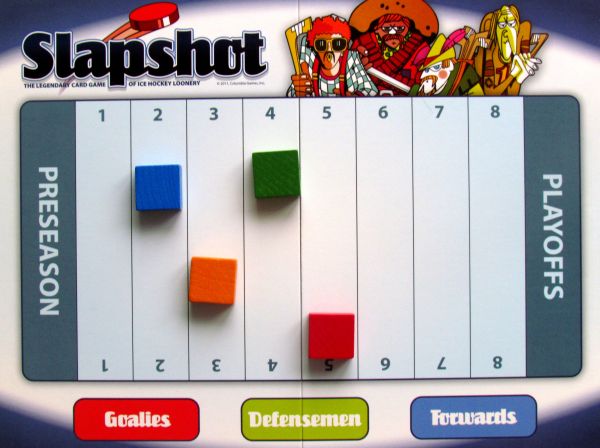 You can choose from three options on your turn. First two are chances to improve your team. You can draft simply by throwing away one card from the six in your hand and drawing top card from deck of the same kind. In most cases however, you undergo a relatively high risk, that the card you draw, will be worthless – lower number, than you have thrown away. But that’s managerial risk indeed.

The second option is to trade with opposing teams. But the exchange is forced in the game and target team is not able to refuse! And how do such trades take place? Opponent spreads his six cards on the table face down and you pick one of them radomly. Then you must return him card of the same type (post) from your team (you cannot use card, you just took). This ensures that both you and your opponent will still have right mixture of players after trade is finished.

And finally, both trading options are followed by the main thing: invite any of your rivals to a real hockey duel. After you choose enemy, both you and him take your team and organize its players at your discretion, to any order you find suitable. This is order, in which they will participate in the match. Both players now put their decks with picture up in front of them. 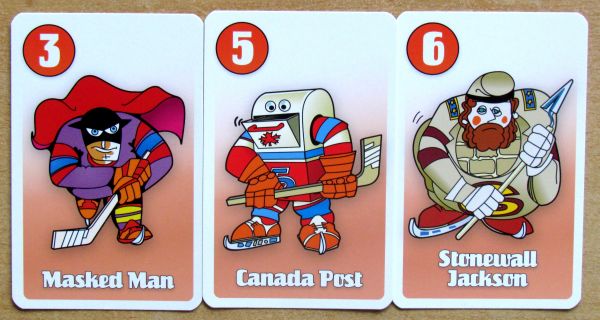 The rest of the battle is just like a game of War. Both players simultaneously turns the top card of their deck and compare its strength (upper left corner) on the card to your opponent. Whoever has bigger number scores a goal and notes it (for example turns the card face down and put it next to the drawing pile). In case of a tie, no team gains any advantage.

Change happens, when one of the players reveals a goalkeeper. These men can never shoot a goal (with the exception of two goalie duel), but on the contrary, they always succeed against the opponent’s attackers and catch his shot. This can prevent you at least in one case from receiving a goal.

The winning team will record its success on the counter in the middle of the table by moving its colored tile one step forwards. Players continue taking turns and playing matches, until someone reaches other side of counting board with inscription PLAYOFFS. In this moment first phase of the game ends.Winner is decided among first and second team in series of seven matches. 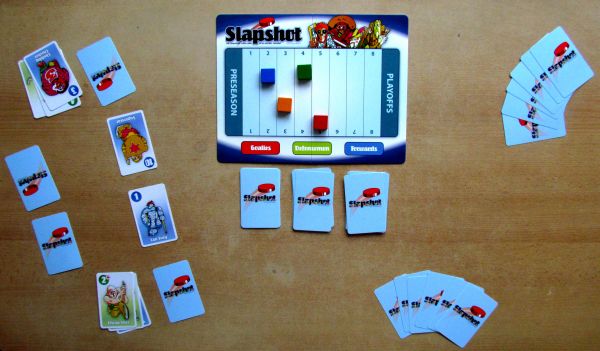 Slapshot is a card game, which in itself ought to have ensured success in meaning of shooting the puck. There are no other games available, which would have hockey as their primarily target. This gives Slapshot a distinct advantage, just as our weakness for this ice game.

Authors took a simple basic game, that we all knew and had before we even know about moder board games and lifted it to the next level. Of course, a simple card as War has no strategy or complicated rules. And this is a place, where Slapshot is not that different. The only thing you can really affect is order of the players in your team, when going for a match. Its composition and exchanges are purely based on luck and that is what you really need to win. But is it necessarily bad?

Feeling of this game is really much different from playing War. In part, this may well be consequence of hockey theme, which is really great for this mechanic. The second reason could be witty illustrations and names of players. 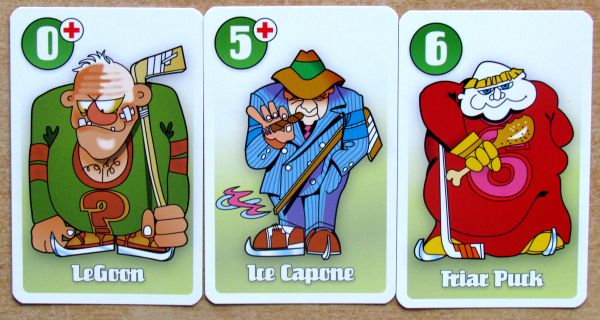 There are, of course, other tweaks in the game. For example, attacking team has always one goal disadvantage, because he is an away team. The defender always plays at home. In addition, you can have a thug in your team and they can hurt opposing players. Injured players cannot return to the game and their manager must draw substitute from the deck after a match finishes.

Advanced rules also provides certain limitations – such as drafts and trades can be done only in limited number. You must therefore always carefully think through, if moment to replace the team member is right now. For fairer competition, you can also play the game according to the schedule or improve knockout playoff system.

Individual battles are only part of the victory path. Just because all the time you play will contain a lot of exciting moments and twists. This position suits Slapshot perfectly and thanks to it, its great for easy playing in families of hockey fans. And children will love this game more, that you ever did War. 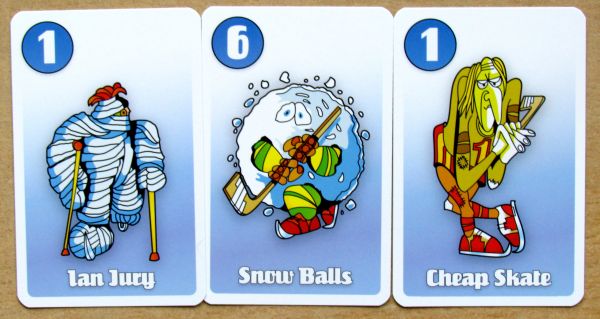 Perhaps the only drawback is, that most teams will not make it to final play-off and that means, that players will have to watch several matches without playing. Players also often have not a chance to play and have to wait for other players to complete their matches. But this is the perfect moment for them to watch and learn their opponents line-ups! So beware this and be ready to remember!

Slapshot is surprisingly entertaining hockey card game. While using the simplest system for the comparison of values of cards, you’ll have fun with it, heckle each other and experience many tense moments. You will really enjoy stealing better players from opponents, but sometimes you can miscalculate, take weaker player and be ashamed.. But the battle itself is worth it. Slapshot is a game that will finally find its fans in hockey land – Czech Republic.

- large influence of luck given by basic mechanic
- during playoffs, some players only watch

Slapshot is a card game, which is an advanced version of War. Base mechanic of hockey matches is only about, who has the higher value on his card. But there is a road beneath it, leading to these matches and victory. It contains trades, drafts and even right manager decisions. Each player has one team under his control, composed of six hockey players and can trade them not only on the market, but also with other players. And they cannot refuse that trade. Then, when it comes to a real hockey fight, each player can put his card in any order he likes in a way, which he thinks would lead him to victory. These matches and points from it will lead two best teams into playoffs, which is played in up to seven matches. But during the game playoffs, some players only watch others play and can be therefore bored. But its quite a short period of time. If you are not afraid, that a large luck influence will spoil your experience – everything from trades up to matches is based on chance, then Slapshot is magically easy game suited for family play with smaller children. This game belongs to every hockey-positive family.