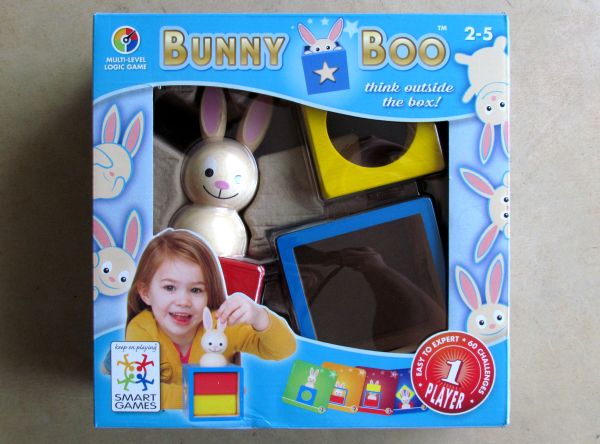 When I was little, I thought, I could hide in a box from anything. I learned it from the neighbor’s cat, who always hid in a small box with a hole and no one disturbed her, until she jumped out by herself. I did not have it easy, because my long ears often stuck out. Today, I found a hat high enough, where I can stretch them. I just need to pay attention to magician, who can make you disappear in it!

Rabbits have a hard life. Pixar film called Sim Salabim already explained this to us earlier. Their coexistence with magicians simply can never be idyllic, because they will never be friends. Fortunately, we get friendly with our rabbit thanks to logical child game Bunny Boo from SMART GAMES. Its author is again imaginative Raf Peeters and this box was published in 2013.

The box does have the same format as other wooden SMARTs, with window in the front, so you can see inside. But its height is now doubled, because components inside require it. And when little girl with a rabbit actually welcomes us on the cover image, we can already see, where the game actually hides all the fun. 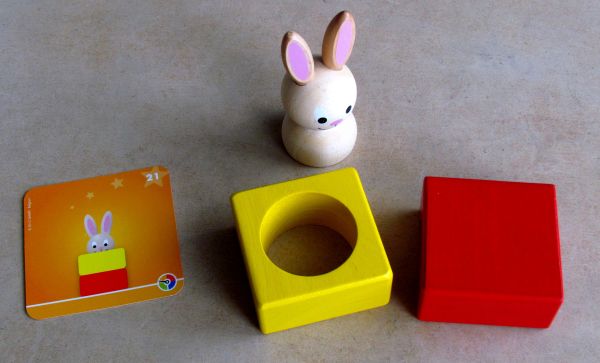 After opening the box, you will find a sturdy base from recycled cardboard, which is stacked with wooden components. There’s a nice wooden rabbit figurine, but also a large blue wooden cube without lid and bottom, with holes in the shape of stars and circle on its sides. Much smaller are then the other two pieces – red bottom and yellow piece with a round hole. Everything is completed just with rulebook and a deck of colorful cards with rounded corners.

This time, therefore, tasks are not merged into one common brochure. Instead, you have a double-sided cards in colors corresponding to difficulty of the task. There’s sixty puzzles divided into four levels. Players will find correct look of the scene on every picture, where rabbait is more or less hidden behind or between tiles. And it is up to them achieve this goal with all wood pieces.

Whoops. Now we have actually revealed not only the contents of the box, but also how Bunny Boo plays. Solvers chooses their task, which is numbered in the asterisk in the upper right corner and put it in front of him. He takes all three wooden pieces and stand bunny nearby. It should not be missing in any completed scene. 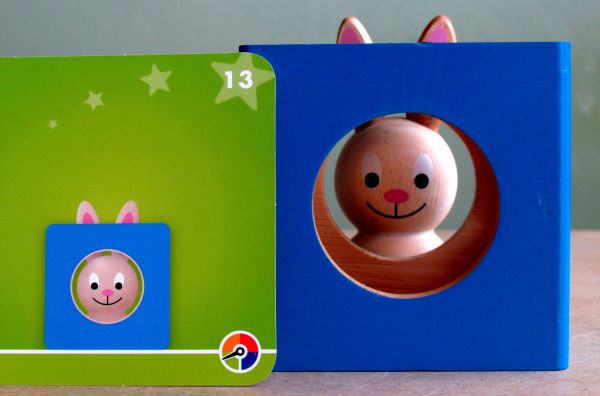 With the help of all pieces and their rotation, he must now create scenery, which when viewed from the front looks exactly the same as printed on the card. At that moment, such task is solved. A player can check rightness of his solution in the brochure, but we do not recommend this. On the contrary, it would be best to put this special blue booklet somewhere out of reach. It unnecessarily provides children with temptation and spoils them excellent entertainment of solving puzzles.

The simplest task uses only one piece in addition to the rabbit. You should put only tiles needed to correctly solve the task on the table for younger children. Because Bunny Boo is recommended already from three years up, it may notábly help in development of children skills.

Mechanisms beautifully teach children understanding of spatial layout of our world. This perception is very important for life and it is good to let children learn it as soon as possible. Now rotation and later also putting one piece on top of another are basic elements, that will little investigators need to succeed. 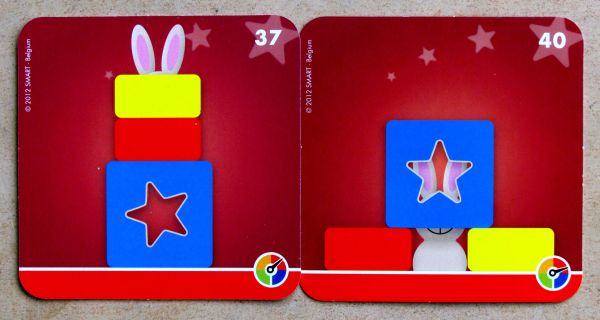 Children gradually work their way from the simplest picture up. They learn, improve and manage more and more difficult tasks. Of course there will be time, when they are able to complete even the last fifteen puzzles (last level of difficulty) without hesitation. That’s when you put the game aside, but you will be sure, they are good in spatial reception. Appearance of this game, however, is so tempting, that even then will they probably just come back to the game for joy, although it already does not provide any real challenge to them anymore.

The actual tasks are really only based on the spatial perception. Building is not being built for themselves and have a variety of folds, shapes and holes on their surface, creating imaginative individual tasks.

The game has a really beautiful processing. Not only the design of large pieces and rabbit, but also the actual colored cards, full of stars and made of hard paper. It is therefore not easy to damage them and that’s good. Fortunately, children have almost no reason to take them in hand, because they simply lay on the table. 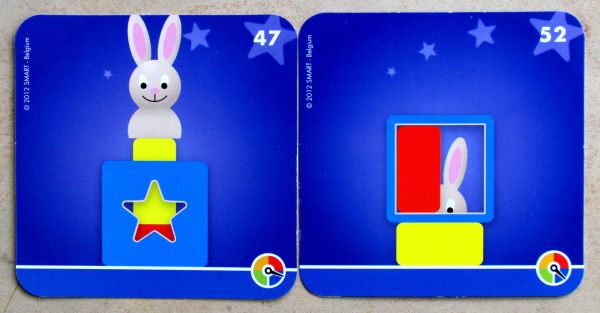 Bunny Boo is a beautiful wooden puzzle for little ones to learn to correctly perceive the space and the correct order of things behind each other. Plenty of challenges and opportunities to gradually improve is great training for children. Although the game will grow old over time, but it will help them in their development and that’s all, that matters. And among all this – its fun to play with this Bunny Boo.