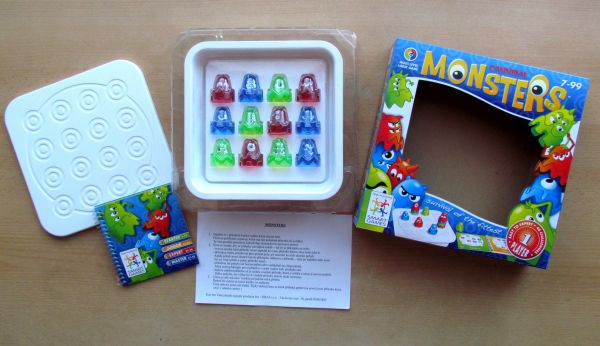 In Yr world, there are only a few species easily recognizable from each other by the color of the body, number of teeth, horns and eyes. These creatures are forever hungry. Decades ago, they ate for dinner the last species and are now alone in the world. But hunger did not disappear. And so they have to slowly eat each other – they are cannibal monsters.

And though their world may sound dangerous, those interested in logic can find a lot of really great fun there. The whole world Yr is hidden in the box from SMART Games company. This world is round white cake with four tabs on each side. On its surface you will find sixteen houses, which are also cannibal lairs. Their entire world was built in 2009, by Mr. Raf Peeters, a SMART games designer.

All is hidden in the classical Smart box. Thanks to it, you have clear insight, what the games has to offer, when buying. There is a window in a box, allowing you to look inside. And you will see a colorful parade there and creatures that could easily be fit into the board game of the Dungeon Petz (review). But these are no imps or dark lords, because they have their little world. 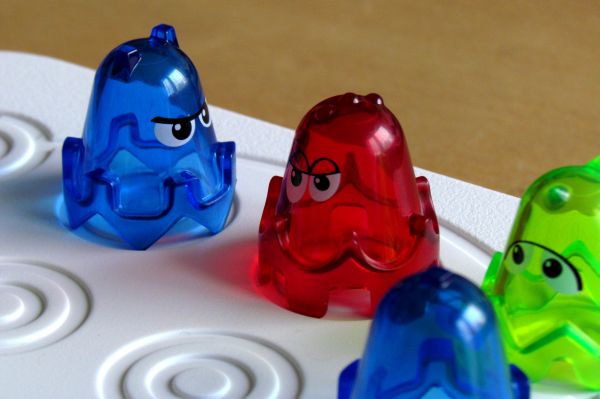 In the box you will find twelve creatures. They are wearing three colors – red, blue and green. Weaker monsters have only one eye, horn and tooth, while stronger and more dangerous can have up to three. Accordingly, they are easily recognizable from each other.

In addition to the board and creatures, you will find also the booklet with rules and puzzles. On the first page, there are rules. Of course, the game offers nothing complex to memorize, so you can after a few minutes of reading proceed to gaming. You have a total of 48 tasks available, in four difficulty levels from Starter through junior and expert to blue master.

Well now we can finally tell you, how actually these cannibalistic monsters eat themselves. First you have to choose a puzzle number and deploy the creatures according to it. You will find a color determining race and also a number within the circle, that indicates the number of horns (eyes), monster has. You place these accordingly and conundrum is ready to be solved. 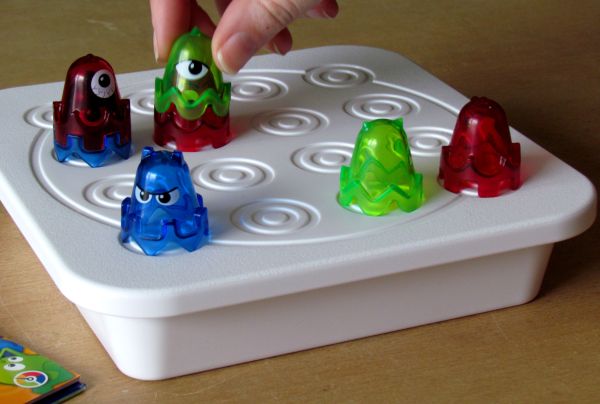 Monsters located on the planet evolved into cannibals during time. Your task is therefore to find the right way, they would be able to eat each other in a way, that in the end, only one monster remains on the planet. You will help your own planet, to which are creatures planning to go and eat everything living there. Last creature, that will remain after your play, will have nothing to feed on and dies of starvation.

The hunter becomes the prey simply: you lay one creature on top of the other and create a pyramid. Their teeth must fit together, otherwise they cannot eat each other! When they fit, it is thanks to unique shapes of teeth, that each specific race has. But not every creature is a suitable prey, because each teeth do not fit together! You must think hard about a monster, that can be moved.

When eating, you will always move the characters on the planet in a way, that every move ends by a lunch or dinner. Each turn must therefore on creature vanish and you cannot prepare for next position only by shifting without eating. There is not time for such waste of time in a cannibal society. Time is food. 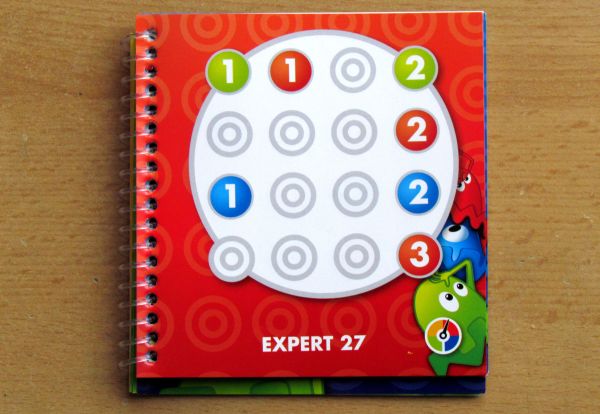 Monsters can not jump over each other and can only move horizontally or vertically, moving in diagonals is prohibited. So whether you move in any direction, the first monster you encounter, must be suitable prey.

Once eaten by the monster, both monsters are part of a larger pyramid. But there is no way out from the stomach, so the pyramid may not be split back. The moment you have just one big monster left on the board, made up of all the others, you have found a solution and saved the Earth!

Cannibal Monsters thrilled us at first glance by its appearance. When it comes to gameplay, there is again a completley simple idea hidden behind all this. Author has managed this time to put it in quite an incredible jacket. In visual terms, it is probably the best SMART, we have reviewed yet. 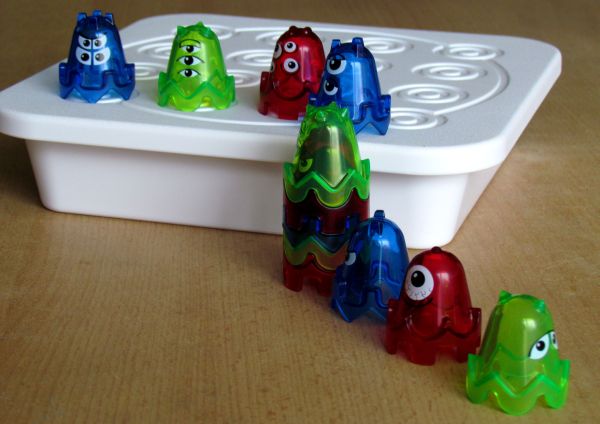 Forty-eight tasks is quite sufficient, because they are so tangled, that you do not know which are which. You can thus basically go through the booklet over and over again, and even tasks that have already been solved, will still be a challenge.

Preparation is elegant and quick. Every solution is of course different. We recommend starting from the quite easy STARTER, because you need to get used to the shapes of creatures. Once you get to know them, then finding solutions narrows only to the search for the first creatures, to start the whole movement.

At the end of the booklet, there is a solution list for all tasks, written in numbers and arrows. You easily solve seemingly unsolvable task with it. As always, it is recommended that the solution is not used as the game completely loses its meaning. 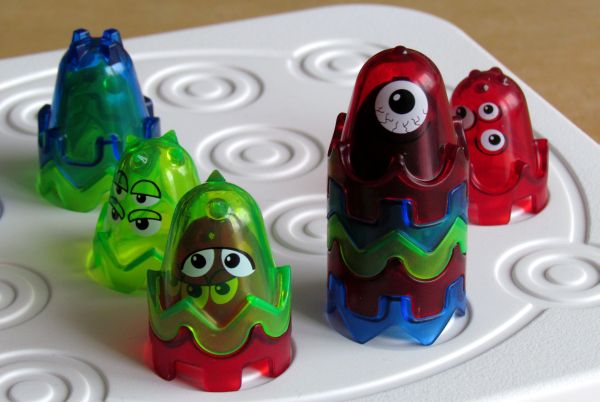 Children will be absoluttely thrilled by this logical game. Of course, it may be in particular thanks to the presentation, which succeeded very well. The chosen topic corresponds to a great gaming system and everything works beautifully.

Cannibal Monsters prove once again, that the simple idea may hide a great game or puzzle. Monsters attract anyone. who will you show them to and you will be troubled with its four dozens of tasks for a very long time. In MASTER difficulty, there hide real delicacies, with which you would cudgel your brain. So for now, do not worry about the cannibals. On the contrary, run towards to meet them, because they provide great fun.

SMART game Cannibal Monsters is great experience for the little ones as well as for adults. It looks great at first sight, extended by cute looks of all the unique monsters. The game system itself is really simple and built only around making of pyramids. You must put them in a way, they fit together with their teeth, but it still offers an incredible variability. Riddles are tought and even in the second difficulty, you will find puzzles, that will make your brain boil. On top of that, there is really lot of tasks and their solutions are written so well, that you will not capture them with one look. So if you like puzzles and monsters, then this one should definitely be in your collection.