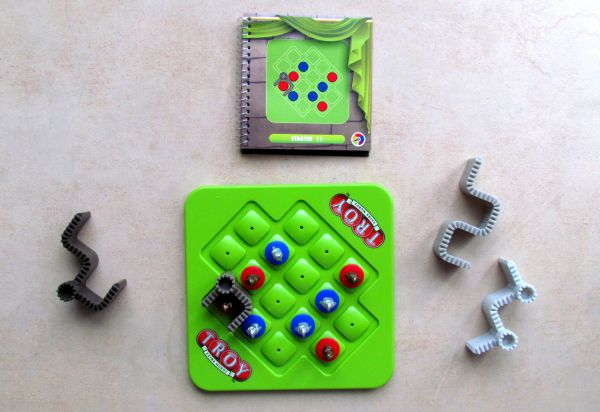 A few days ago, a messenger arrived at the castle. His horse was foaming at the mouth, passed on the ground at our drawbridge. But the rider without hesitation jumped off and ran onwards. He stopped only before the king, knelt down and explained reason for his haste. In the shadow of the forest, there is a strong enemy army forming up and its only a matter of time, before they attack! No time to hesitate, we must build a solid wall and protect our city from destruction!

Hopefully, you are also good at building walls, otherwise innocent people will die. Your soldiers do not have the slightest chance against the invaders without sturdy wall in front of them. This will quickly become your task in puzzle game produced by Belgian company SMART GAMES named Troy: Extra Muros.

We managed to get review sample directly from the author, Raf Peeters, whom we thank now for the chance to play and try to introduce it not only to Czech audience, but also to English speaking world. Rules are simple enough, but it is already standard in these logical puzzles. We have tested many of them, but all reviews are available only in Czech language, up to this point. 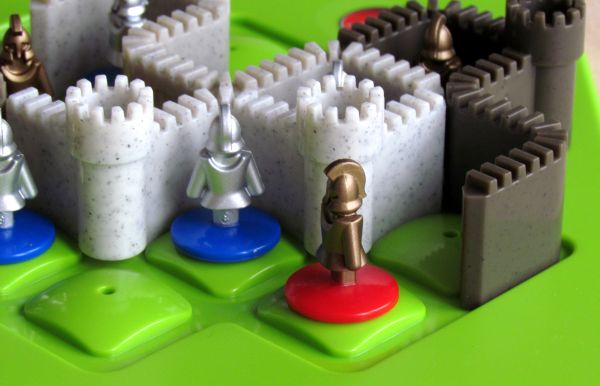 Troy is a game coming from series of larger puzzles, so its located in a square box (and not that skewed one, like Angry Birds, for example). Its face is except illustration of soldiers on both sides dominated mainly by window, which gives you a peek inside. There are ogling at you not only fighters, but also plastic walls and green meadow, on which will battle occur. This is all covered up in the starting form with plastic coating, preventing your components from falling out.

After opening the box, you pull out the transparent form and within it found firmly embedded green game board. Its face fills battlefield with symmetrical shape – length of five and a width of four squares. Individual boxes are tucked up and you find a hole in their midst to place your loyal soldiers. It looks much like some sort of portable small version of chess. Among the boxes, there are slight gaps, where curved walls fit seemlessly.

It is these plastic components, that are next in line, when you unpack this puzzle. There is peace ruling the plan for now and nothing suggests, that it should host great battle to conquer the castle in just a moment. There are four blue defender soldiers wearing silver armor. Attackers are coming in with a red base and metal suit in golden colors. Wavy walls are different from each other and sometimes their curves are interspersed with watchtowers, which will make putting a wall even more difficult. 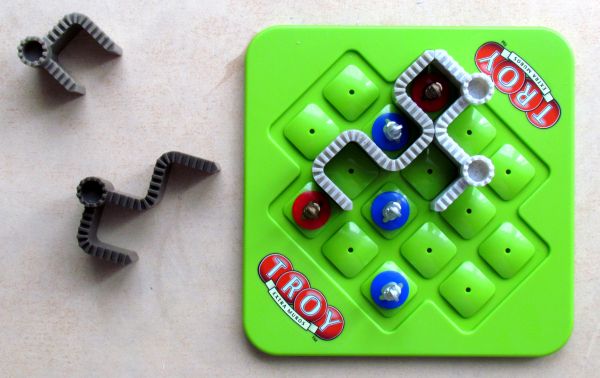 Gaming area is made of plastic and when you lift it up from its place, you see there is something hidden underneath, at the bottom of the box. Tasks and their solutions are printed on a classic pad with spiral binding. Total of sixty different battles await you, in which you have to always make good use of your walls to protect soldiers from the raid. Only if neither of these sixty conquest succeeds, the Red Army will pull away to another kingdom.

You will be entering a total of five levels of difficulty, twelve tasks each. We start at the easiest of starters and come up through advanced, expert and master even to the hardest wizard – level intended only for magicians, which are part of every proper castle. But do not worry, you can try to solve them, even if you can not perform magic. Just get ready, they are really pretty tough.

At the beginning of each task, you spread not only your blue soldiers , but also the invaders on the game board according to the image. And now it’s up to you to use all the walls available to ensure, that attackers cannot get to your men from any side. You can enclose them together into one large courtyard or each separately. It depends on the specific task and its correct solution, which you must find. Only when all blue soldiers are safe and wall is surrounding them on all sides , you can rejoice of solving the puzzle. 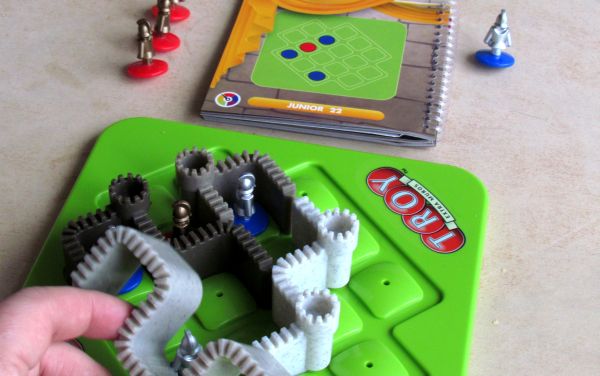 When solving, you would expect some obstacles. The first and basic are different shapes of walls and their two possible rotations. You fortunately can not turn them around upside down this tim. Sooner or later, you also get to a point, when a tower stands in the way. Around such a large circular structure, there can lead no wall, because there is not enough place for it. And often just playing of the last barrier stands between you and successful solution to the puzzle. Compliance with the rules is a necessity, so you have no choice, but to come to terms with their existence.

Overall, the game gives a lot of emphasis on the ability to project walls placed on the board, when you are holding them. Once you have some on them layed out, you must not only see options for the remaining stone structures, but also look for chances to move those already built. In the puzzle game Troy, there is no clear and logical process, how to figure out an effective solution. You need to combine, search options and only then (sooner or later) discover the correct answer.

If you are getting really desperate, you can find a solution in the same brochure as your task. Each of these quests is followed by picture, that shows correct distribution of walls. At the same manual will again entice children, who do not have the patience, to peek and spoil their enjoyment from solving the puzzle themselves. You can not play without these setup instructions, so you can not confiscate results pages. But you can always prepare puzzle yourself and then take away the pad with you. However, solutions are really well done, you can tell pieces apart easily not only by their shape, but also by different colors. 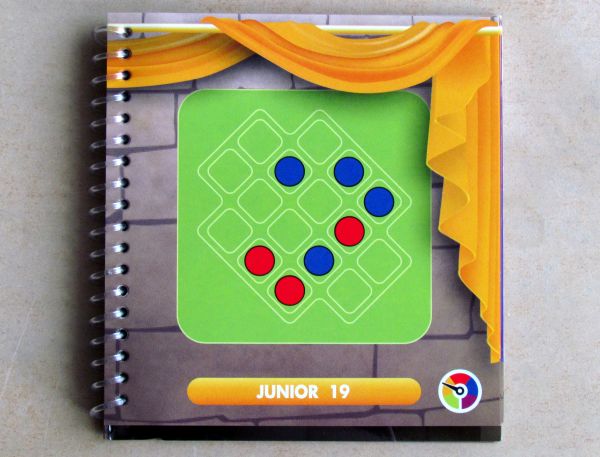 The success is decided a little by luck, because if you accidentally put a wall right in first move, you will be much closer to a solution. But without a proper plan and good perception or this may not be enough to succeed, mainly because later tasks are really difficult. With time, however, puzzlers improve as they get to learn to know the different shapes of the walls better.

Processing is again excellent. All components meet one hundred percent of their task, walls and soldiers are staying in place. But even then, this game is not something to play somewhere on the road. The wall pieces are just a bit restless and box also does not contain any bag for carrying.

Troy is not entirely suitable for the youngest children, due to demands on imagination and spatial perception. However, different levels of tasks guarantee to offer variable puzzles for the whole family and fun exactly for two players – you and your brain.