Review: Spells of Doom – conjure your way to victory 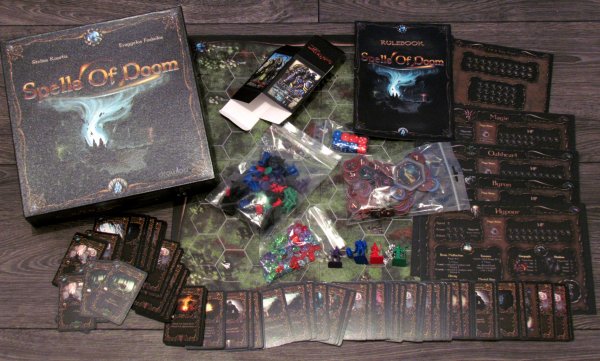 I kept silent and watched as our country is suffering under the predatory talons of war for too long. Many of us could do something, but we always prefer to curl up further into a corner, hoping the storm would pass. But our houses are still burning and end of our suffering is not in sight. I will not give up to swords of Helloder. I hid my weapon in the bedroom and when they come, I will slay them one after another. Glory to Telin!

And so we come, as yet unknown hero, into story of game Spells of Doom. It was formed by pair Evangelos Foskolos and Stelios Kourtis and in 2014, they presented it as final work at the fair Spiel in Essen. As a publisher is marked Drawlab Entertainment, but in addition, also 270 fans on Kickstarter have also contributed to its publication. Game was possible also thanks to illustrations of Babis Kourtise and Themis H. Vasconcelos.

Whole world Shaqua Maertis is hiding in a really dark black box, from which emerges only magical vortex of jagged rocks. In the foreground, we see a little silhouette of a man. Is that you? We will find out, when we open the box. Inside, we discover folded game board divided into a pile of hexagonal fields. 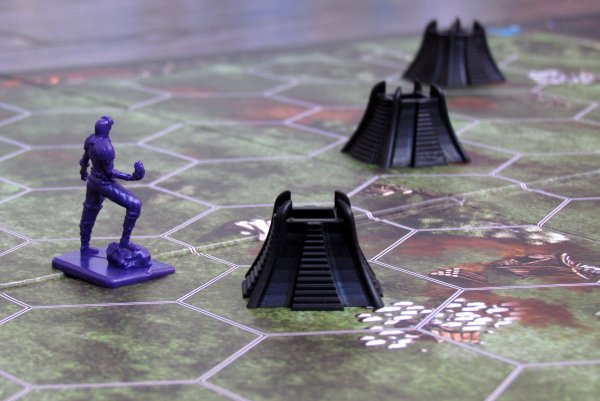 Smaller boards (almost cards by thickness) are prepared for each player and represent four heroes, who rose to end the war. Each one has described his available spells, abilities, but also a place for storing magical energy, number of lives, armor and attack. Last board is used to monitor victory points and played turns.

In the box are also cardboard sheets, from which you remove tokens of damage, but also ten kinds of various creatures, usually three copies of each, and a small pile of tokens used to indicate different states (such as stun). Also eight dice and hundred magical crystals of different colors are available to heroes.

Only now, however, we come to the most interesting part, because there are also miniatures in the box. Each side has six towers (three magical and three defense). Remaining nine gray buildings are sanctuaries. And then, of course, there also have to be cards. Specifically, 120 of them with textual effect description. 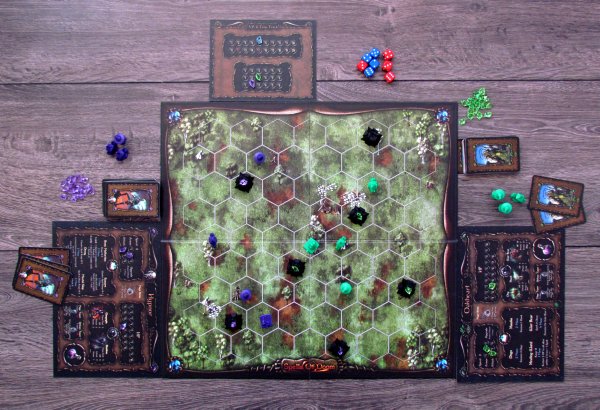 At the beginning of the game, players put board among themselves and deploy shrines on it. Then everyone must choose his hero, which will provide his briefing card and miniature, but also set of towers, monster tokens in his color and magical stones by their glittering hue. After one crystal then is then placed on top of the armor (minimum), attack (min), and live scales (maximum). Hero starts with seven mana in his stock, while holding five cards from a shuffled deck. Match starts by putting a miniature on the battlefield.

Match takes a total of three round, each divided into six turns. This corresponds to time scale in three rows on auxiliary board. At the beginning of each turn, players earn new mana from captive sources, and their towers are activated, healing friendly creatures and attacking enemies in the area.

Then, gamers can perform a series of actions, each once in any order. This includes, of course, movement of all creatures, which are under his control, while distance corresponds to their speed. For price of five magic points (mana), player can also improve his hero, either in defense (fewer injuries) or attack (more dice). 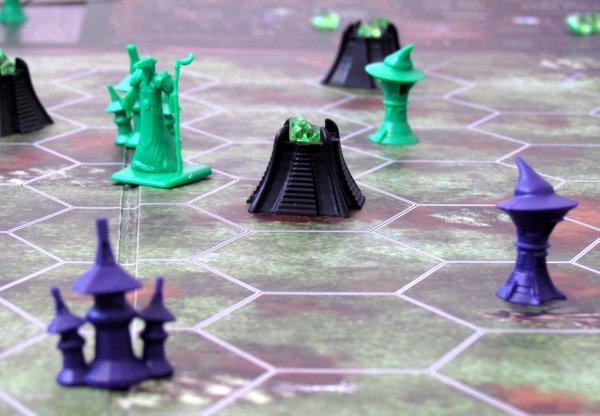 Once the hero arrives at place, where there is some magical sanctuary, he can get it under his control for two mana points. As a sign, he puts a miniature crystals in his color on its top. But its simple only with neutral buildings at the beginning of the game. Later, players must first successfully attack the enemy building, before they can seize it.

They also have opportunity to build their own building for five mana points. Such buildings enhances attack or defense of friendly units, as already mentioned. It can also destroy opponent units, but buildings can also be demolished. And then there is, of course, card handling. By their discarding, hero can gain a bit of magical energy, but pivotal point is their playing. More can be played during one round. They can temporarily improve hero stats or allow him to use spells (one per turn). These are purely offensive and allow to liquidate opponents on board.

What would it be for heroic game, if there were not battles. Such a struggle can be waged between adjacent hexes and as many dice as here has an attack value may be used. Damage is inflicted for every dice, that has a higher value, than the enemy armor. For taking bloody notes are tokens, which enemy party does not like to use. For killing enemy hero, player gets valuable four victory points. 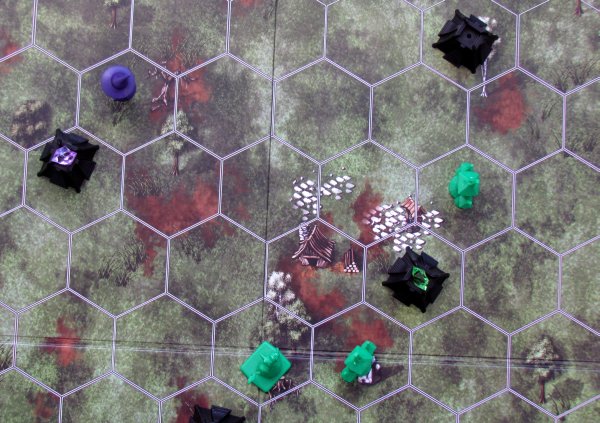 At the end of round, player discards remaining cards (one mana). But he might hide some of them in the reserves and draws a new five. After six turns, end of the round occurs and with it also scoring of magic shrines control. Each building brings its sovereign one victory point. After eighteen turns (three rounds, game ends and winner is the one, who accumulated the most victory points.

Spells of Doom is a relatively simple skrimish game, in which you start smashing headlong into each other. At least it seems so. But because most of the time is spent trying to seize and hold certain areas, everything revolves around it instead.

Seven sanctuaries brings significant points total to each round, but that is not the only one source for victory. Players will go uncompromisingly for each other throats, because four victory points for killing enemy hero is a royal reward! Additionally, defeated warrior will resume his quest in the next round and will appear on board (although he loses all of his upgrades), so fun can continue. 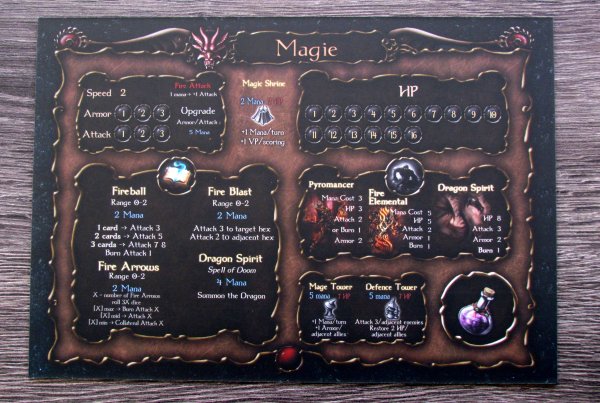 Nevertheless, it basically does not use any unique concept, but still make the game fun. Many interesting situations lie in the need for players to constantly try to outwit one another. To do that, they will mostly use cards as a great mover of atmosphere. Their management, utilization and perfect timing can surprise opponent and this is exactly, what keeps you entertained. Tactics also are about buildings, which well placed provide invaluable support to your side. Using cards is linked also to the fact, that experienced player will totally crush a novice. It can discourage some players from getting into this world.

Game lasts a relatively short time and mainly take place in a comfortable pace. We blame the fact, that the game is almost exclusively designed for two opponents battle. If we were to express it in numbers, to complete eighteen turns, you will need about an hour of time. Sometimes a little more. In addition, game also offers team play of two against two, where progress slightly slows down, but for a benefit of adding new elements of cooperation.

Processing of Spells Doom is nice, miniature shrines and heroes are really well done. Its a shame, that they did not include miniatures of monsters. Graphics itself is a victim of a little darker overall concept of visualization, but pictures are thematic. Only frames and piping is a little bit overused. The rules are not written exactly in most transparent way and do not answer every question. 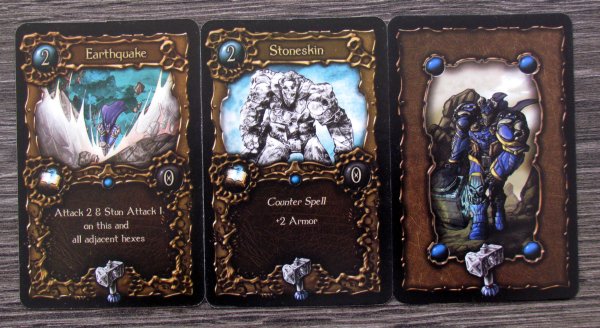 Game has major problems with accessibility. At the start and after the first game, you will be searching, clarifying rules and consulting frequently asked questions on the Internet. And this costs time, that you could spend playing. It is a shame, because a bit more examples would definitely be nice.

Spells of Doom is a game of battles. This is kind of simplification of Mage Wars (review) with less possibility to influence your individual character. Players seem more like magicians, who flung fireballs. Spells of Doom is a game, that definitely has an atmosphere, and despite its flaws deserves at least some attention.

- similar matches
- rulebook
- beginner has no chance against veteran

Spells of Doom has a simple concept of mages / fighters, who walk on plain, occasionally dealing a blow to each other, but mostly controlling monsters and casting spells. All this in order to occupy and maintain control of shrines, that give them power (victory points). But sweet reward awaits also those, who can kill enemy hero. Big mover of entertainment are spell cards, that can surprise enemy and supporting tactics, enhancing a single statistics. It is a tactical game, although players must cleverly use and possibly for a fee hide the card. Game can be criticized for perhaps too same matches and also unclear rulebook. Spells of Doom is otherwise positive and interesting experience.